Berlin: Politicians from across the divide in Berlin have called for the re-introduction of compulsory service, as Germany reconsiders its relationship with its armed forces.

Bringing back compulsory military service would “do real good” for German society and help to bring people together, Carsten Linnemann, the deputy leader of the conservative CDU party, said.

The debate includes influential voices from the governing centre-left SPD who also are calling for a return of conscription among men and women aged over 18. 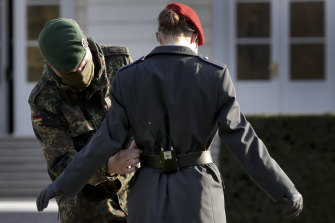 A soldier adjusts the uniform of a recruit prior to an oath-taking ceremony of the German army at the Bellevue palace in Berlin in 2020. With the war in Ukraine, there’s a new push for Germany to reintroduce conscription.Credit:AP

“What we’re witnessing at the moment is that peace is not a law of nature,” Linnemann told German broadcaster ZDF, adding that compulsory service would counteract polarisation in society with “too many people putting themselves before the state”.

As recently as 2011, all adult German men were expected to perform a year of compulsory military service, although they could opt for service in civil society based on moral grounds.

The law passed at that time to suspend national service made it clear that the freeze could be lifted in times of war or increased international tension.

There have been intermittent calls for compulsory service to be brought back in recent years. In recent days, as Germany confronts its pacifist approach to foreign policy in the wake of the conflict in Ukraine, calls for a debate on the issue have grown.

The CDU deputy leader in the Bundestag, Johann Wadephul, told Die Welt newspaper that military service would be “a chance to find a lot more recruits” and suggested that it could be linked to gaining points in a pension system or eased access to university places.

The SPD defence spokesman in the Bundestag, Wolfgang Hellmich, told a local newspaper last week that compulsory service helps to “promote a sense of community”.

“We urgently need to hold the debate on this, as it needs social consensus,” he said.

Other politicians have described the proposal as a distraction. “We need technology and weapons systems, not brains. Conscription is not an issue at this point in time,” said Florian Hahn, defence spokesman for the CDU in the Bundestag.

Eva Högl of the SPD, who is the Bundestag’s Bundeswehr commissioner, also described the proposal as “a theoretical discussion that isn’t helpful in the current situation”.

For years, the Bundeswehr has been plagued by damaging headlines about malfunctioning helicopters and misfiring assault rifles. A report published in January found that just 77 per cent of the German armed forces’ weapons systems were ready for operation.

War in Ukraine has brought Germany’s military deficiencies into focus, with Chancellor Olaf Scholz announcing a €100 billion ($148 billion) fund to bring the Bundeswehr back into fighting shape.

Finance Minister Christian Lindner has promised to turn the German army into “the most effective” in Europe.