People across several suburbs in Melbourne’s north have been told to stay indoors after a truck carrying hazardous chemicals crashed on the Western Ring Road in Tullamarine.

The fume warning comes after a B-Double truck carrying a chemical pesticide crashed through a barrier on the road, rolling onto its side and into an embankment near the Melrose Drive off-ramp at 2am. 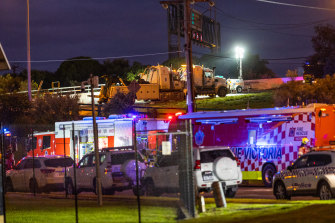 A truck carrying hazardous chemicals crashed over an embankment on the Western Ring Road.Credit:Jason South

Emergency services safely removed the trapped truck driver, a 41-year-old Mernda man, who has been taken to hospital for observation.

Residents in Airport West, Gladstone Park, Gowanbrae, Strathmore Heights and Tullamarine have been advised to stay indoors due to the chemical spill.

Fire Rescue Victoria hazardous materials crews have set up an exclusion zone around the spill. 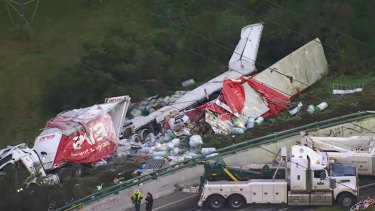 The truck driver has been rescued and emergency services are cleaning up a chemical spill.Credit:Nine News.

About 40 firefighters responded to the crash, with crews now working to clean up the chemicals.

Police are investigating the cause of the crash, which is not yet known.

Department of Transport spokesperson Chris Miller said the crash scene was causing passing traffic to slow down on the Western Ring Road between Pascoe Vale Road and the Tullamarine Freeway.

“There are delays on the way past,” he said. “The clean-up will take some time.”

The Melrose Drive Ramp to the Western Ring Road is closed. Drivers are advised to take exits onto the Tullamarine Freeway or Airport Drive as alternatives.