London: Scientists have found the gene that gives tabby cats their stripes, and believe it is also responsible for giving the leopard its spots.

The discovery is yet more support validating an almost 70-year-old theory first posited by Alan Turing, the brilliant mathematician who cracked the Nazi Enigma code. 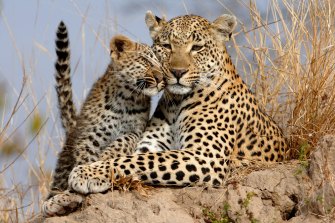 The research shows that Alan Turing was right about the way in which spots and stripes develop in the womb.

He believed the spots and stripes of cats are created by a spreading process that occurs in the skin cells of the animals when they are mere embryos.

Turing hypothesised there were chemicals – which he dubbed morphogens – that spread throughout the unborn feline’s skin like a wave, creating stripes. If the process occurs twice with different sets of morphogens, the waves overlap and cause spots, the theory states.

However, Turing’s mathematical prowess was unable to provide one key detail: the identity of these chemicals.

Stanford researchers tried to find the answer by taking foetal skin samples from domestic cats and found that before hair follicles are created, thick and thin bands of skin are formed.

A chemical made by a gene called Dkk4 creates these bands which later turn into stripes. When the Dkk4 gene mutates and fails to work properly, the animals lose their stripes, leading to the “ticked” fur of some cats.

Although the research was done on domestic cats, the academics say the same mechanism likely underpins the forming of spots and stripes in big cats.

Professor Jeremy Green, professor of developmental biology at King’s College London, is an expert on morphogens and was not involved in the new study but said the findings were important, if not surprising.

“It’s a very nice piece of work that combines quite traditional genetics with cutting-edge technologies,” he told the London Telegraph.

“It reinforces the growing idea that Alan Turing was right in his very last paper, which was a pure mathematical theory about how embryos organise themselves into different parts.”

However, while the paper furthers our knowledge of why and how big cats get their patterns, some questions remain unresolved, he said. For example, the study does not answer how Dkk4 is regulated; why different cat species have differing patterns; and why some stripes are spread far apart.

Further research may be able to answer these questions, adding more detail to Turing’s initial theory.

The new findings were published in the journal Nature Communications.