RUSSIA and China's "deadly" alliance would effectively end the United States' status as the world's leading superpower, an expert has claimed.

On Tuesday, Moscow said it has ramped up its military "cooperation" with Beijing in light of alleged threats by Washington including US nuke bombers flying near their borders. 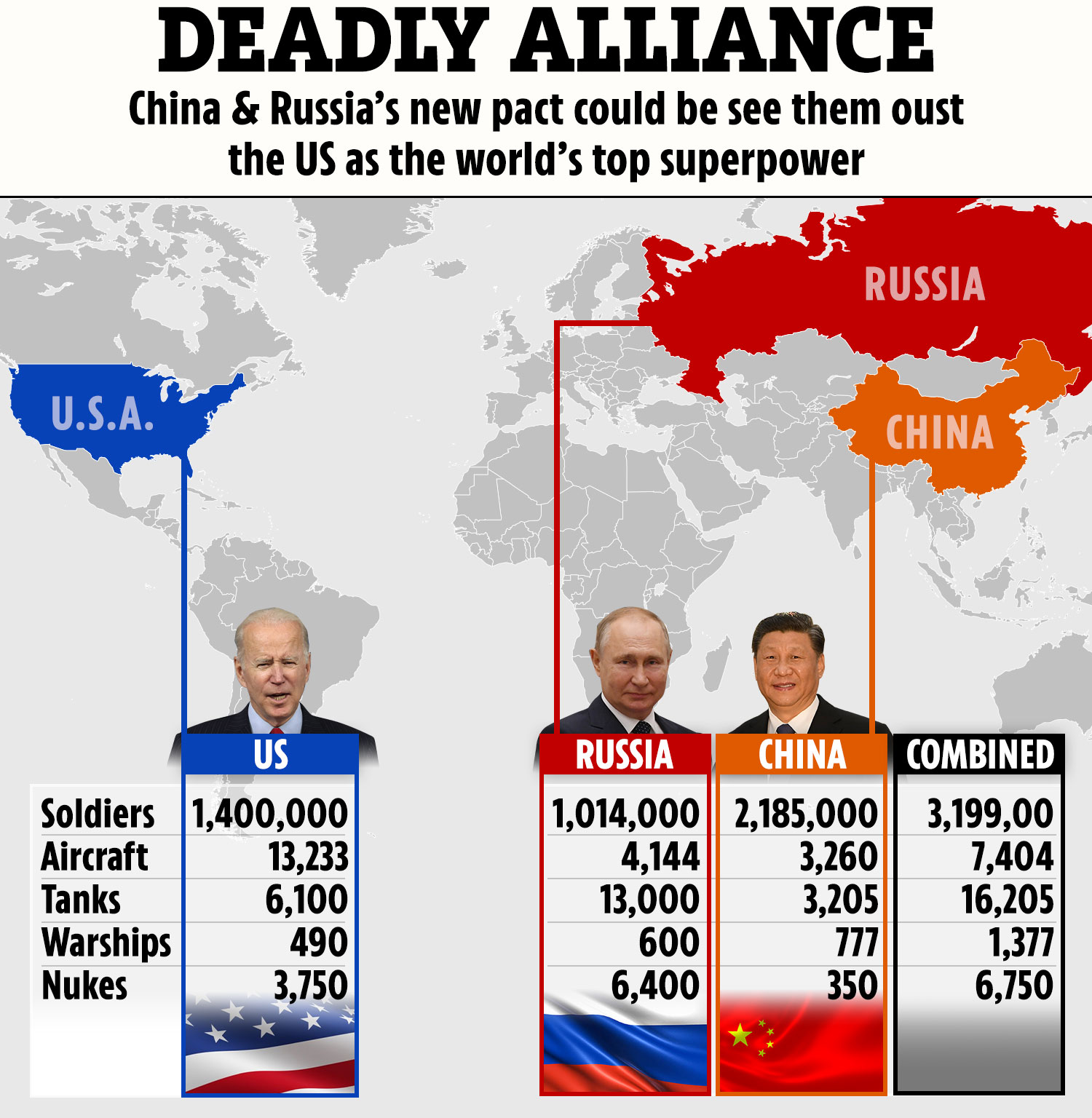 Tensions between the West and Russia are at boiling point over the ongoing conflict in Ukraine and the migrant crisis in Belarus.

Isabel Sawkins, a research fellow at the Henry Jackson Society specialising in Russia, told The Sun Online that Russia and China joining forces could "potentially could be catastrophic" for western powers.

She said: "Bringing China into the conversation is a deadly addition for the West.

"This would mean America's standing in the world will be absolutely shot to pieces.

"If you have Russia and China working together the US is going to go into absolute panic.

"Because China is on its way up in the world. It's not only a massive economy – they have so much power.

"You would have China working with Russia and them both having this anxiety over the West – and that brings them together. That's a really terrifying prospect."

In August, Moscow and Beijing took part in a joint war games and signed a so called "brotherhood" pact "establishing twinning relations."

This week, in light of US drills reportedly 20km from Russia's border, the Kremlin's defence minister Sergei Shoigu revealed the two authoritarian powers have stepped up their military alliance.

He said: "Against this backdrop, Russo-Chinese coordination is becoming a stabilising factor in world affairs."

The two countries agreed during a video call to increase the cooperation between their armed forces when it came to strategic exercises and joint patrols, Russia's defence ministry said.

Ms Sawkins said if the military partnership develops it will be "terrifying" for the West.

She said: "If Russia and China end up working together – they will want to put America down a few pegs.

"They don't think America deserves to be this global player at the forefront of everything.

"The Biden administration – its reputation has been tarnished by what happened in Afghanistan and this has lead to a lot of people questioning the credibility of the US when it comes to military interventions and activities abroad."

On the implications for Europe and Britain, she said: "It's terrifying for the UK because we are significantly closer to the border with Russia than the US is.

"We are very, very close to Moscow."

America would not be able to fight Russia and China by itself.

Ms Sawkins said that if Russia and China were to attack American forces, the UK would have to step in.

She said: "Europe is going to get caught up in the mess. We need to make sure that we are ready in case there are after strikes – and we have to go in. We have to be on guard basically.

"America would not be able to fight Russia and China by itself. America would need western partners and I think one of the first ones they would come to us."

Earlier this month, Russia warned relations with the West are “almost at boiling point” as tensions surge over migrants at the Poland-Belarus border.

With Nato and Russian forces playing cat and mouse games, Putin said he would “simply destroy” any country that encroached on his country’s territory.

Recent days have seen US officials warn Russia may be plotting an invasion of Ukraine, with the Kremlin massing 100,000 troops on their border.

And Putin's regime has been accused of stoking the unfolding migrant crisis between Belarus and Poland and even sent their own nuclear bomber jets into the area.

Belarus – dubbed Europe's last dictatorship – has been accused of "weaponising" migration against the EU sparking a tense stand-off along their border with Poland with troops on both sides. 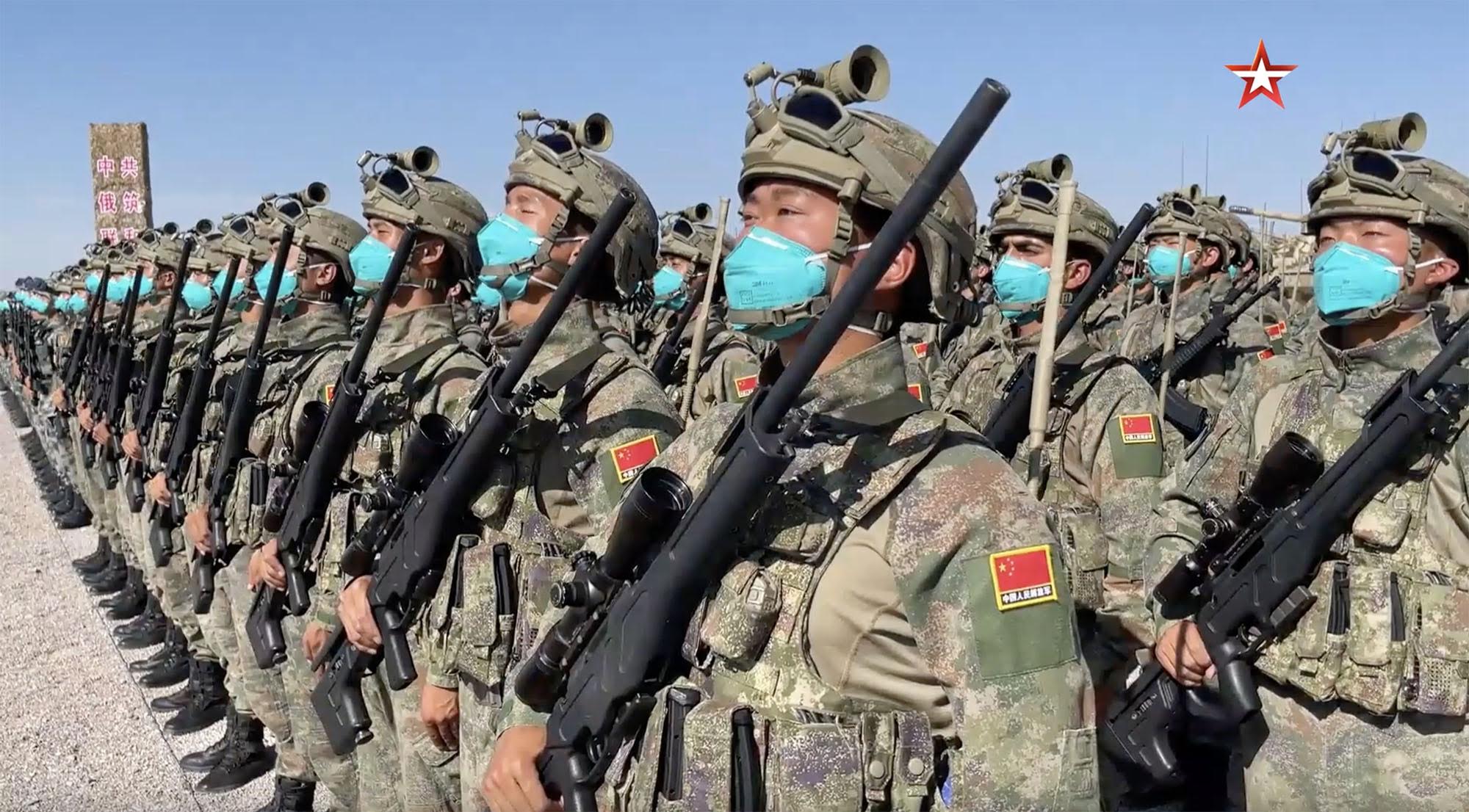