If you want to end lockdowns forever get vaccinated: Expert urges everyone to get a Covid jab as programme opens to under-45s today amid fears young people ‘don’t think they are at risk’

Young people should get Covid vaccines to regain their freedom and bring an end to lockdowns even if they are at a lower risk of dying, a scientist has said.

But widespread vaccination across all adult age groups is vital to bringing an end to the constant restrictions that have ruled people’s lives for the past year.

The NHS vaccination programme opened up to people in their late 40s today, with everyone over 44 now eligible for a jab which they can book online or by phone.

Experts are concerned that younger people will have lower jab uptake than elderly groups because they don’t face a high risk of death from Covid, and they may be more likely to have seen anti-vaxx theories online or be worried about side effects.

Dr Ali said: ‘We are going to face an issue, particularly in young people who perceive the threat of Covid to be less.

The Government will launch a new primetime TV advert tonight to urge people of all ages to get vaccinated, showing it in the ad-break on ITV’s Emmerdale at 7.15pm.

Another 641,000 vaccine doses were given out yesterday – 498,000 of them were second doses – and Britain has now given 33.67million adults at least one dose of a vaccine, with 12.6million fully protected with both. 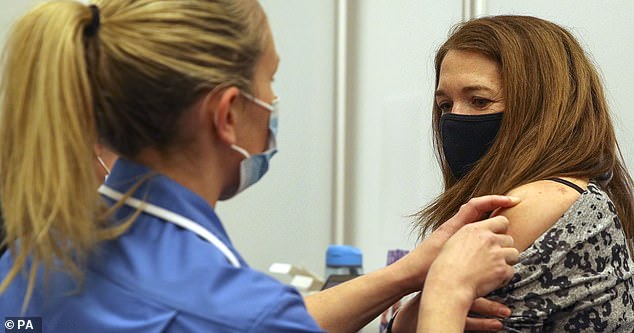 Everyone over the age of 44 in England can now get a coronavirus vaccine by booking online or by phone (Pictured: A woman gets her jab in Reading) 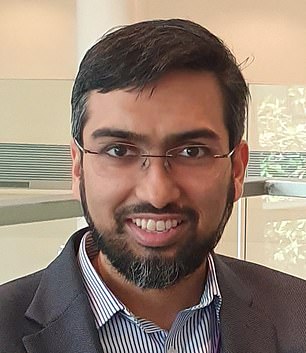 Dr Raghib Ali, a clinical epidemiologist at the University of Cambridge

‘There’s a degree of altruism versus personal benefit as you go down the age groups, particularly as you get below 30,’ Dr Ali said.

He added: ‘The surveys I’ve seen suggest uptake is going to be about 85 per cent, which isn’t as high as the current rate but no-one thought we’d get 95 per cent uptake before.’

Dr Ali suggests a tricky element of young people getting vaccinated is that for many of them it is selfless and intended to protect other people rather than themselves.

Most people admitted to hospital with the disease are in middle age now that vaccines are protecting large proportions of elderly people.

But although younger adults have a low risk of death, the virus spreads fastest among them and in higher numbers, meaning they keep outbreaks going and fuel new ones.

Public Health England data last week showed that people in their 30s had the highest infection rate among adults at 34 positive cases per 100,000 people.

This was followed by 20 to 29-year-olds, with 32 per 100,000. Teenagers had the highest positive test rate (42) but they are not yet able to get vaccines so younger adults must get jabs to reduce the impact of those outbreaks.

Studies have suggested that the vaccines will prevent transmission as well as severe disease, meaning it is vital for everyone to get a jab.

Oxford University research last week found that among those who had been given at least one dose of either the AstraZeneca or Pfizer vaccine there was a 74 per cent drop in symptomatic infections.

Crucially, the jabs also cut asymptomatic cases – where the person infected has no signs of illness – by more than 50 per cent. This is critical to stopping people unwittingly spreading Covid.

Vaccine hesitancy in Britain is highest among 16 to 29-year-olds, according to recent figures from the Office for National Statistics (ONS).

An ONS survey carried out in February and March found some 12% of people in this age group said they had declined the vaccine, were unlikely to have the jab if offered or did not know if they would have a vaccination.

This is the equivalent of around 1.2 million people, based on the weighted population figures used in the ONS survey.

Hesitancy was nine per cent among those aged 30 to 49 – the equivalent of 1.6 million people. 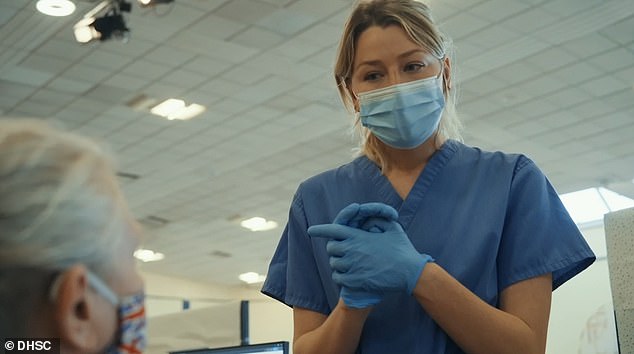 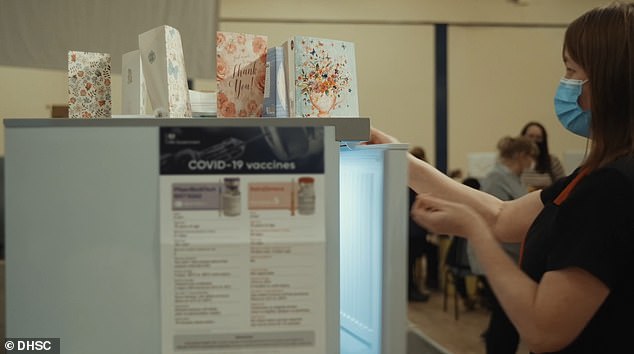 The ad (pictured) showcases the health workers and volunteers involved in the rollout across the UK, as well as some of the millions of people who have already had their jab

PFIZER’S ANTI-COVID PILL ‘COULD BE READY THIS YEAR’

Pfizer’s Covid-preventing pill could be available by the end of the year if human trials in the US and Belgium are successful.

There are currently no drugs other than vaccines that can stop people developing Covid-19 – but if one is discovered it could spell the end of lockdowns forever, one expert has said.

Pfizer, the company that made one of the most-used jabs in Europe and North America, is already testing its experimental pill on people.

The antiviral drug, named PF-07321332, could be given to stop the illness getting severe in people who have started showing signs of coronavirus infection.

Although most people will get vaccinated against Covid, jabs aren’t 100 per cent effective and some people can’t have them or don’t benefit as much, meaning coronavirus will still spread and still be dangerous for unprotected people.

Pills could help to prevent severe illness in people for whom jabs don’t work as well, or be a second line of defence in case an immune-resistant new variant emerges.

Around 60 people are currently involved in the first phase of Pfizer’s PF-07321332 trial, which is expected to come to an end on May 25.

After this, if the pill turns out to be safe, larger trials with more people will be done to prove that it definitely does stop Covid, as lab tests suggested it will.

Boris Johnson announced last week that the Government was setting up an antivirals taskforce to find and buy up antiviral drugs that could make Covid treatable at home by the autumn.

Tonight’s advert will showcase the health workers and volunteers involved in the rollout across the UK, as well as some of the millions of people who have already had their jab.

The campaign – called ‘every vaccination gives us hope’ – will make its debut during Emmerdale on ITV on Monday at 7.15pm.

The Department of Health and Social Care (DHSC) said the advert will predominantly be aimed at people under the age of 50 who will be offered their first dose, as well as the over 50s who are booked in for their second dose, to encourage vaccine uptake.

It follows the news that Britons in their 30s could receive their call-up for the jab as early as next week, with officials close to securing tens of millions of Pfizer jabs.

The new order of 40million roughly doubles the UK’s original order and will arrive in time for a third booster dose to be given to elderly people in the autumn.

If the negotiations are finalised, the extra stock could also be used for people in their twenties who will be offered an alternative to the AstraZeneca vaccine.

The new ad campaign will run on multi-cultural media, social media, on the radio and on billboards across Manchester, Liverpool and London.

The 60-second advert will feature a cover of Dinah Washington’s What a Difference a Day Makes recorded by songwriter and artist Shells.

The song will be released to the public through streaming services on Friday.

The DHSC said the campaign also aims to highlight the ‘significant’ role the vaccine is playing in preventing infections, hospital admissions and deaths.

It will urge the public to get their facts about vaccines from trusted sources like NHS.UK and their GP so they can make informed and evidence-based decisions.

Health Secretary Matt Hancock said: ‘Vaccines are helping us get back to doing the things we have missed – they protect you and those around you.

‘This campaign is a remarkable and poignant reminder of everything we’ve been through as a country and everything we have to look forward to – as well as the tireless efforts of our volunteers, NHS heroes and the British people.

‘Every vaccination gives us hope and I urge everyone to take up the offer of a vaccine when it comes, as we continue on the path back to normality.’ 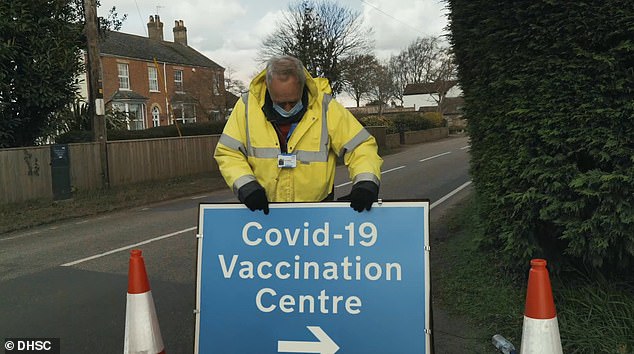 The Department of Health and Social Care (DHSC) said the advert (pictured) will predominantly be aimed at people under the age of 50 who will be offered their first dose, as well as the over 50s who are booked in for their second dose, to encourage vaccine uptake 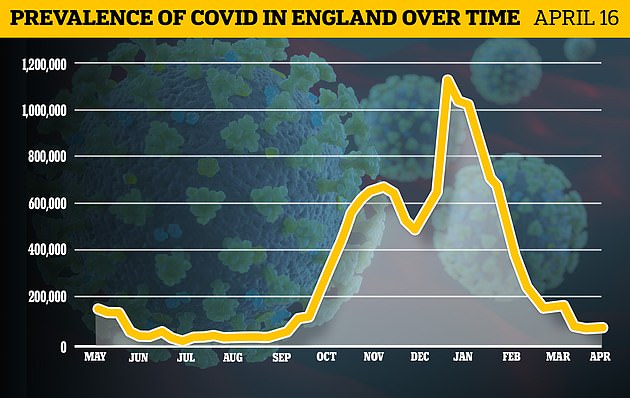 The British Medical Association (BMA) said it welcomed the campaign, with BMA GP committee chairman Dr Richard Vautrey saying: ‘Since the rollout of the programme the BMA has strongly encouraged everyone who is offered a vaccine to take it.

‘It’s important that younger and less vulnerable people don’t confuse their lower risk of becoming seriously ill from the virus with no risk.

‘We are all at risk of contracting the virus and, as we’ve seen throughout the pandemic, becoming seriously ill from it, including a growing number of people, both young and old, now suffering from long Covid.

‘The fact is the pandemic will not be over for anyone until it is over for everyone – and to achieve that we need high uptake across all groups of people throughout the entire country.’

Over the weekend, figures confirmed more than half of the UK’s total population has received a first dose of a Covid-19 vaccine. 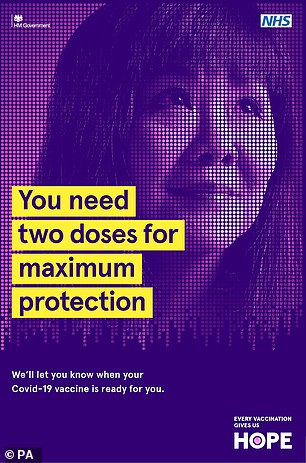 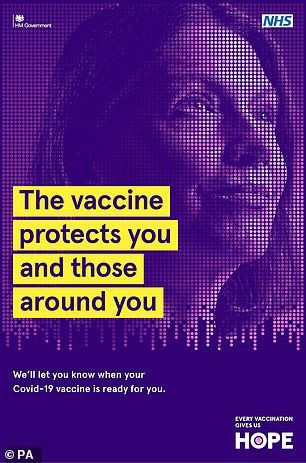 Adverts launched by the government as part of their latest campaign.  The new ad campaign will run on multi-cultural media, social media, on the radio and on billboards across Manchester, Liverpool and London.