Debra Richardson goes about her days waiting for her phone to ping. Morning to night, in between shopping and work, she constantly checks for a message from Ukraine.

The Melbourne woman is not Ukrainian, and she has never visited. But there’s a 40-year-old man over there, fighting for his life and country whom Ms Richardson considers a son. 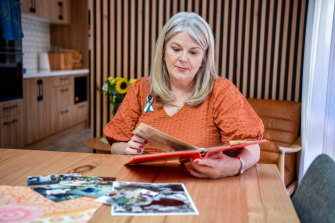 Debra Richardson looks back at media coverage of the “Chernobyl Children” when they came to Australia in the early 1990s.Credit:Joe Armao

In the early ’90s, the Melbourne-based St John of Kronstadt Russian Welfare Society helped bring to Australia for short stays with foster families more than 100 children from families affected by the 1986 Chernobyl nuclear disaster. It was one of several Chernobyl-related foster initiatives organised by charities that brought hundreds of children to Australia in the years after the disaster.

A heavily pregnant Ms Richardson, then a Victorian police officer, offered for her young family to host a child. That child arrived at Melbourne Airport one night in September 1993.

“We still didn’t know which child we were getting, or how old they were, or anything about them,” she remembers. “We went to the police academy this particular night and all of a sudden, we were told, ‘You’ve got Yuri and he’s 11 years old. Here you go, and we’ll be in touch.’ ”

“I’ll never forget, he had a tiny little backpack. And in his backpack, he had a couple of pairs of underpants … that was all that he came with.”

Yuri was meant to stay with the Richardson family for about six weeks, but the entire cohort of Chernobyl children stayed for nearly three months after Australian families were told Russian “businessmen” had intervened in the charity’s work.

“They were saying that they would not return the children to Kyiv, they were going to take them via Moscow. But they would only take them there if we gave them a planeload of medical supplies, and $US250,000,” Ms Richardson says. “So we were basically getting extorted.” 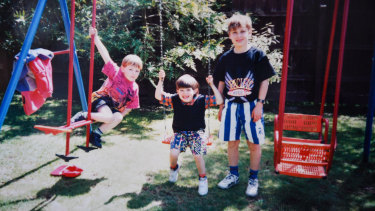 The plight of the stranded children caused a media storm in Melbourne and the saga ended only after singer John Farnham convinced Lauda Air chief executive Derek Jewson to fund a flight to get the children home in time for Christmas.

After receiving one thank-you letter from Yuri and his family, Ms Richardson didn’t hear from him again for more than 20 years. Five years ago she met another police family who had contacted their foster child via Facebook, and Ms Richardson started a hunt of her own.

“I sent hundreds of messages to everyone with the same name as Yuri saying, ‘I’m your foster mum from Australia’, and of course heard nothing,” she says. “And then, about two years ago, I finally get this message from Yuri saying, ‘Yes, it’s me Debra, my Australian mum.’ ”

Over the past two years the two have exchanged messages, Yuri telling Debra about his new wife and baby boy, and life as a police officer in Kyiv. They shared pictures of the ’90s Australian trip and laughed about memories. 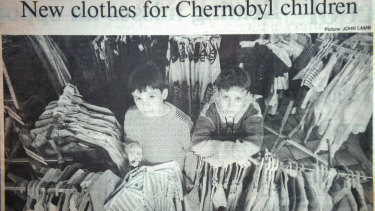 Yuri (right) appeared in a photo published in The Age in 1993.Credit:The Age

But just over two weeks ago, when the Russian invasion began, the tone changed.

“He wrote to me … to say that his dad had evacuated his family to safety … and then the next day he phoned me and we had a talk face-to-face for about 30 minutes,” Ms Richardson says tearfully. “It was like he just wanted to see me to say goodbye.”

For his protection, Ms Richardson doesn’t want Yuri’s surname or a current photo of him published. After staying in a bunker in Kyiv for a number of days, his wife and son have left for the border while Yuri is required to stay behind to help the war effort as bombing and shelling continues.

In recent days the messages have become less frequent, and shorter. Yuri has stopped telling Ms Richardson exactly where he is, concerned his chats could be monitored and he could be found by Russian troops.

Ms Richardson has been busying herself making Ukrainian-flag lapel ribbons to sell to raise money for humanitarian charities helping Ukrainians. She says she understands the position of Western allies not to escalate beyond sanctions against Russia, but says it’s heartbreaking to hear Yuri beg for Australia’s help.

“Yuri said, ‘Please, just if you just stopped the [bombing from the] skies and we can do the rest on the ground. Can you tell the world to protect us from the skies?’ ” she says.

She hopes that one day soon Yuri can once again come to Melbourne for peace and respite from the troubles of his homeland – this time with his wife and son.