Victoria's International Baccalaureate students are celebrating receiving their results after a year of study disrupted by the coronavirus pandemic.

Results released on Sunday showed the more than 1000 year 12 students that completed the International Baccalaureate graduate diploma in 2020 achieved results that were in line with those of previous years, despite the lockdown and the move to remote learning. 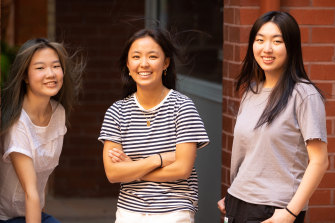 Lauriston Girls School's Amelia Zhu achieved a score of 44 out of a possible 45, the equivalent of a 99.75 ATAR, making her the joint IB dux. The school’s median notional ATAR was 97.0

"I was really excited and really surprised," Amelia said.

"I just hadn't felt sure what my results would be. It was a difficult year.” 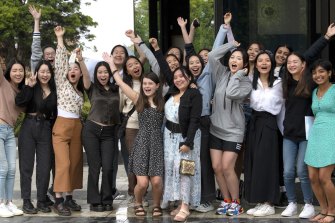 "To achieve such impressive results in the face of such adversity throughout the year is a testament to the calibre of these young women," principal Diana Vernon said.

Presbyterian Ladies College had six of its 37 IB students achieve a perfect score of 45, while 97 per cent gained a notional ATAR of 90 or above.

The results came with added relief after some students and schools had voiced concerns about how the International Baccalaureate Organisation (IBO) would acknowledge the difficulties faced by Victorian year 12s.

Unlike VCE students, IB students did not receive special consideration from the state government or have their exam schedule changed. However, the IBO said it would recognise adverse circumstances and mark more generously.

Amelia said students had been concerned about how they would be assessed, but that she and her classmates had felt more positive after exams went well.

Lauriston principal Susan Just was the chief of International Baccalaureate Heads of Victoria and Tasmania last year and worked closely with the IBO.

"We spoke to them extensively about it," she said.

"These young people were in lockdown for pretty much 16 weeks, that has a significant effect on learning in year 12.

"The IBO was wonderful. They listened. They were very good at monitoring all the results that came through."

Ms Just said the scores were a credit to the students and their teachers.

"There were many hurdles that this year offered them and they worked consistently through. We can only be proud of them."

Progressive independent school Preshil no longer offers the VCE and runs the IB curriculum exclusively. Retiring principal Marilyn Smith said the IBO had made significant adjustments to assist its pupils.

"We had to acknowledge there were IB students around the world having an equally tough or much tougher time," she said.

"The IBO did as well as they could have done.

"Seeing the results I was thrilled and relieved."

Among Preshil's high achievers were twins Rosie and Lily Blight who scored 40 and 43 respectively.

"For Rosie and Lily supporting each other, along with the other students in the class, has been a boon in a year of enforced isolation and increased anxiety."