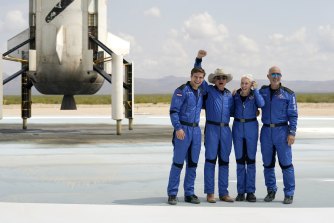 This week Jeff Bezos, the richest man in the world and mastermind behind the retail giant Amazon, fulfilled a lifelong ambition and launched into space.

This is the sort of sci-fi manoeuvre that makes rocket travel today more akin to plane or ship travel, just another vehicle to board and depart on. While Bezos and crew returned via a separate parachuted capsule, the reusable rocket is revolutionary for the space business. Upon landing this week, Bezos – estimated to be worth $US205 billion ($280 billion) – said that he had had the “best day ever”.

How does everyone else feel?

While Bezos believes in “going to space to benefit Earth”, his launch was met with as much derision as celebration. No one contested the technological accomplishment. Yet the optics of a billionaire whose fortune has been linked with harsh working conditions and monopolistic business practices fulfilling his personal dream during a raging pandemic triggered a rash of reactions. Bezos didn’t help his own cause by proclaiming: “I want to thank every Amazon employee and customer because you guys paid for this.”

Only last year, a US House Judiciary Committee probe into antitrust behaviour declared: “Amazon’s pattern of exploiting sellers, enabled by its market dominance, raises serious competition concerns.” US Senator Elizabeth Warren was more pointed. After Blue Origin’s launch, she wrote: “Jeff Bezos forgot to thank all the hardworking Americans who actually paid taxes to keep this country running while he and Amazon paid nothing.” Warren was not alone in voicing such sentiments.

Who is Jeff Bezos?

Born in 1964, Bezos, a lifelong space and technology enthusiast, graduated from Princeton University in 1986 with a degree in computer science and electrical engineering. A fan of Princeton physicist Gerard O’Neill, who envisioned self-supporting space habitats with cities and parks, by the mid-1990s Bezos had abandoned a successful career on Wall Street and moved to Seattle, where he began building his online bookselling venture.

After rapid uptake by consumers around the world, Amazon became a public company in 1998, surviving the dotcom boom and bust. A mere two years later he formed Blue Origin (two years before Elon Musk’s SpaceX). Amazon expanded from books to clothes, electronics and all merchandise, whittling down delivery time for customers and margins for competitors. 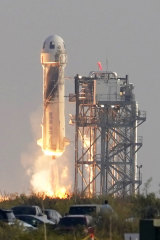 Optimised for profit, growth and speed, Amazon was increasingly called out for anti-competitive practices, demanding the lowest prices from suppliers and punishing those who sold their products cheaper elsewhere. As the technology got more complex, and the company grew more dominant, Amazon could better shape the competitive environment. Bezos even bought one of the most influential publications in the US, The Washington Post, in 2013. Meanwhile, the work pressure became so high in the anti-union company-operated warehouses that employees had to relieve themselves in bottles. Bezos stepped down as CEO this month but remains Amazon’s executive chairman and its largest shareholder.

Why does this week’s launch matter?

A friendly rivalry exists between Musk and Bezos, but it was Blue Origin in 2015 that was the first company to successfully accomplish a vertical rocket landing.

Reusable launch rockets can cut the price of transporting a kilogram of goods into orbit from $20,000 to $2000, moving an activity that had once been in the hands of governments into the private sector. Smaller, faster microchips are driving down costs and making satellites smaller too. In unveiling a Blue Origin moon lander in 2019, Bezos warned that the Earth would eventually run out of energy, making colonising space (not Mars, which Musk has targeted) a chief goal. “You can’t wait until the long-range problems are urgent to work on them,” as Bezos put it. 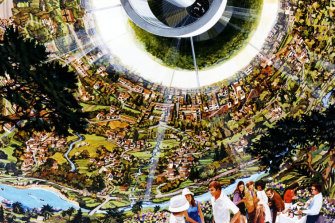 Jeff Bezos has been inspired by physicist Gerard O’Neill, who envisioned self-supporting space habitats with cities and parks.

After the launch this week, he added: “This sounds fantastical, what I’m about to tell you, but it will happen. We can move all heavy industry and all polluting industry off of Earth and operate it in space.” The prospect of solving the problem of pollution by hoisting dirty industry into space sounds like science fiction. Coming from the guy who understood the prospect of online commerce years before others, and then made it happen, makes dismissing such grandiose visions harder – regardless of the public’s misgivings about billionaires.

The space business is set to grow, possibly more than tripling to $US1.4 trillion in the next 20 years on Morgan Stanley numbers. Expect the likes of Blue Origin and SpaceX to take a big bite of that apple. Yet even as space tourism and commercial launch services look set to flourish, public angst grows about inequality. Given the trajectory toward domination by companies like Amazon (and Facebook, Apple, Netflix and Google), Silicon Valley writing its own rules for space has generated some public concern.

Amazon and the tech giants have succeeded in part by growing quickly enough to shape the terms of the industry and overwhelming regulators. If governments can’t effectively regulate the billionaires’ companies or keep abreast of technology on Earth, what hope does the public have for a space that benefits them?

Houston-based Poppy Northcutt, who helped put humans on the moon as a rocket scientist with NASA during the Apollo program, says the billionaire-led space race would bring new worries. “Anyone who knows any of the history of the commercial [ventures] that led the early European exploration of the Indies, Africa, the Americas, Asia would have concerns,” she told The Age and Sydney Morning Herald.

Yet there is an undeniable problem Bezos is solving simply by applying sustained funding and interest in space programs. “Our country’s body politic has major problems making and keeping long-term commitments. And space exploration and other big science projects require long-term commitments to be successful,” Northcutt says.

The question for Bezos, as for the public, will be whether we’re on the road to space colonies in orbit or a corporate colonisation of the stars.