JK Rowling’s name has magically reappeared in the latest trailer for the new Fantastic Beasts film after it was effectively scrubbed from the original version amid the author’s ongoing transphobia row.

The Harry Potter creator, 56, was barely mentioned in the first teaser in December after many said she had been cancelled by the woke brigade for her comments on trans issues.

The blockbuster, starring Jude Law and Eddie Redmayne, is part three of a planned five part series, and is out in UK cinemas from today.

In its original trailer, it used the captions ‘Warner Bros invites you’ rather than ‘J.K Rowling invites you’, as had been the case in previous teasers, and shoved Rowling’s name in a minor publishing note at the end.

It led some to theorise that studio bosses were ‘woke-washing’ the film’s promotional material by removing or hiding Rowling’s name to appeal to millennial and younger audiences – many of whom disagree with her remarks.

Its release on December 13 came a day after Rowling had criticised Police Scotland for saying it would record rapes by offenders with a penis as being committed by a woman if the attacker ‘identifies as a female’. 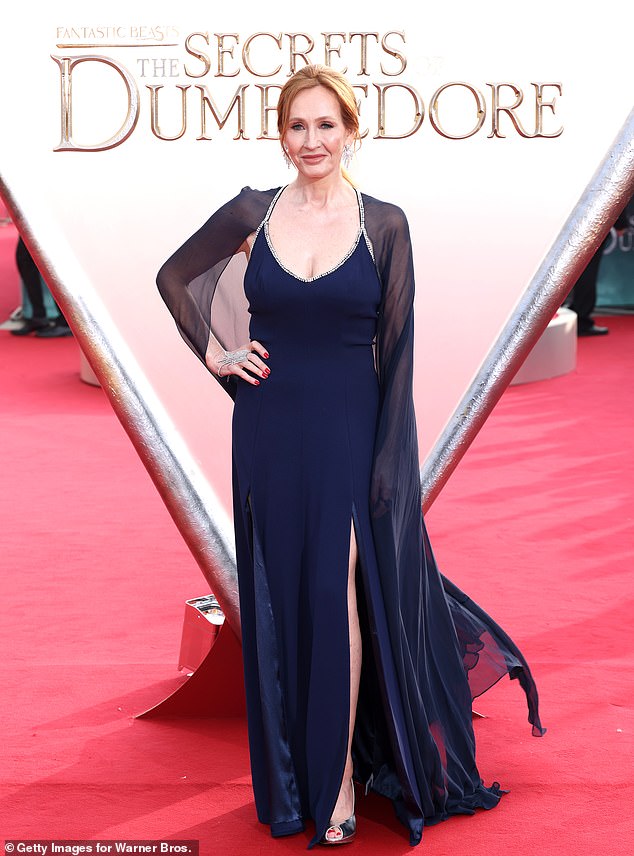 The latest TV advert for Fantastic Beasts: The Secrets of Dumbledore, mentions JK Rowling in huge letters (Pictured: Rowling at the world premiere on March 29) 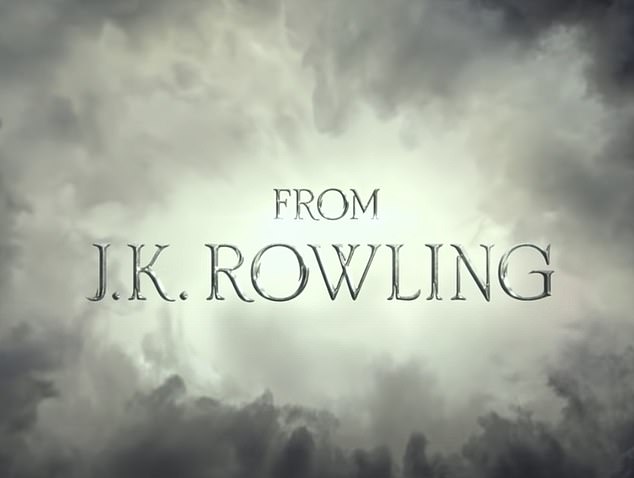 Both a trailer released in February and this week sees the caption: ‘From J.K Rowling’ flash up on the screen (pictured)

The blockbuster, starring Jude Law and Eddie Redmayne, is part three of a planned five part series, and is out in UK cinemas from today. (Pictured: New trailer’s credits list JK Rowling as a producer and author of the screenplay) 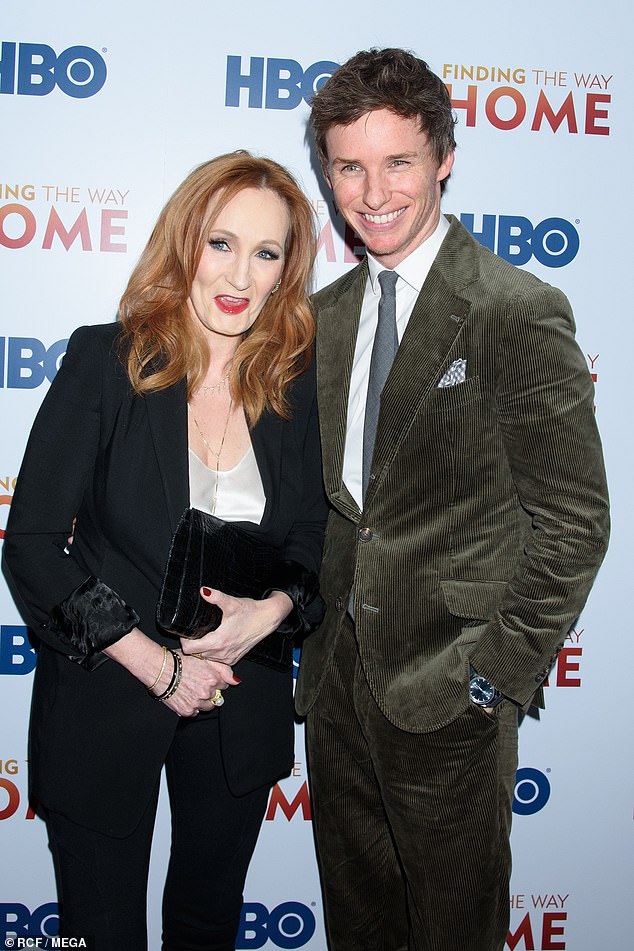 Rowling responded to Police Scotland, tweeting: ‘War is Peace. Freedom is Slavery. Ignorance is Strength. The Penised Individual Who Raped You Is a Woman.’

Her comments were a nod to George Orwell’s Nineteen Eighty-Four, a dystopian novel about a regime that manages to invert the truth to control its people.

But while her name was subsequently snubbed in her own movie’s trailer – which she co-wrote and co-produced -, it has since reappeared.

Both a trailer released in February and this week sees the caption: ‘From J.K Rowling’ flash up on the screen.

However a radio advert heard on the airwaves this morning continued to omit her name, describing the film as coming from ‘the creator of Harry Potter’.

Public relations expert Mark Borowski told MailOnline today that studios and marketing bosses will always want to make sure their product does not become a ‘political weapon’ by being ‘dragged into a culture war debate’ that does not appeal to their target audiences.

But he suggested Rowling is still a huge asset to the industry, describing her as an ‘absolute genius’ whose Harry Potter books and film franchises continue to appeal to younger audiences. 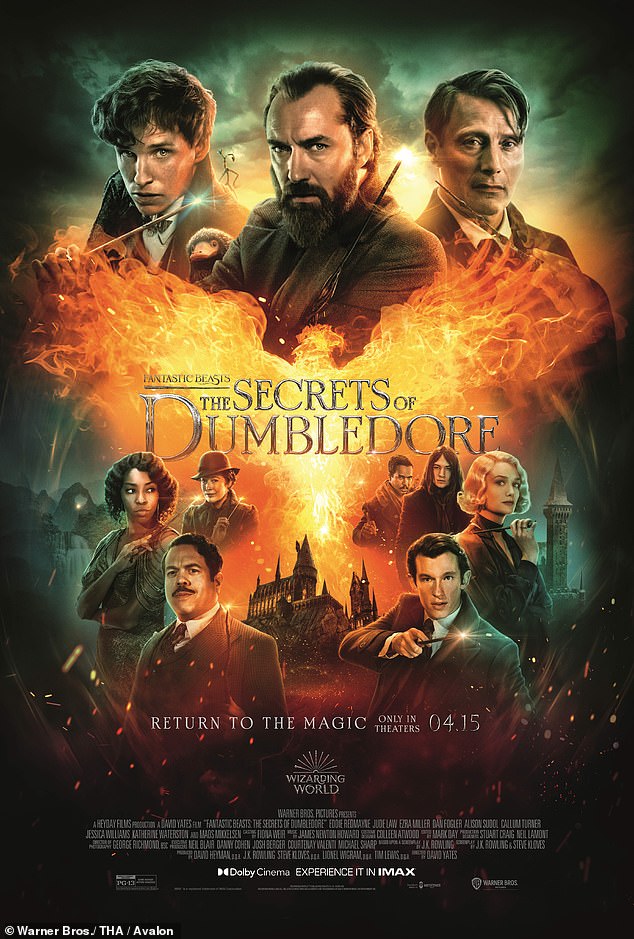 Rowling co-wrote and co-produced the film, which was released in cinemas in the UK today and stars Jude Law and Eddie Redmayne. (Pictured: Poster for the film with JK Rowling seen in the small print at the bottom)

He said: ‘They are trying to tread a very delicate line of making sure the product does not become political.

‘The key problem is that the people who grew up and loved the Harry Potter books are the ones who are right at the centre of the so-called culture war, and a lot of that audience don’t necessarily agree with some of the comments made by Rowling. It’s a bit of a generational issue.

‘Ultimately, the studios and publishing execs do not want to drag the franchise into a big debate that does not reflect the views of the audiences they are appealing to.

‘It is always a strategy to make sure great stories or projects do not become a political weapon.’

It means the TV or radio stations featuring the adverts have no editorial powers over their content, including whether or not to omit Rowling’s name, for example.

MailOnline has contacted Warner Bros and representatives for Rowling for comment.

It is understood that Rowling is happy with the radio advert.

It follows a spate of rows over the author’s comments on trans issues over the past couple of years. 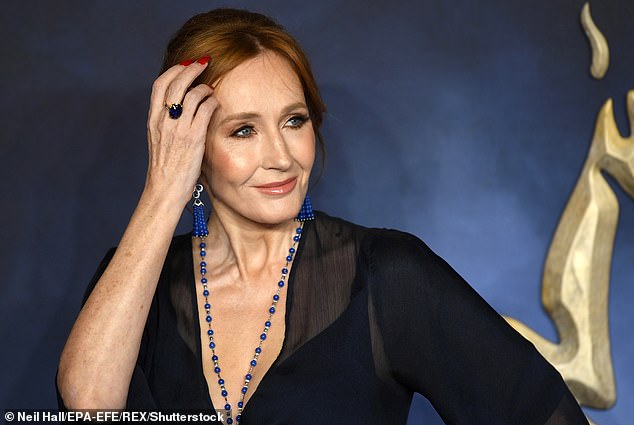 In March, Rowling said the Labour Party could ‘no longer be counted on to defend women’s rights’ after its leader Sir Keir Starmer declared ‘trans women are women’.

The leader of the opposition had attempted to end criticism that its MPs were tying themselves up in knots over what defines a woman.

But in a series of furious messages on Twitter, Ms Rowling wrote: ‘I don’t think our politicians have the slightest idea how much anger is building among women from all walks of life at the attempts to threaten and intimidate them out of speaking publicly about their own rights, their own bodies and their own lives.’

She said she had received ‘thousands of letters’ from women across the political spectrum who were ‘outraged and angry at the deaf ear turned to their well-founded concerns’.

She added: ‘Now Keir Starmer publicly misrepresents equalities law, in yet another indication that the Labour Party can no longer be counted on to defend women’s rights. But I repeat, women are organising across party lines, and their resolve and anger are growing.’ 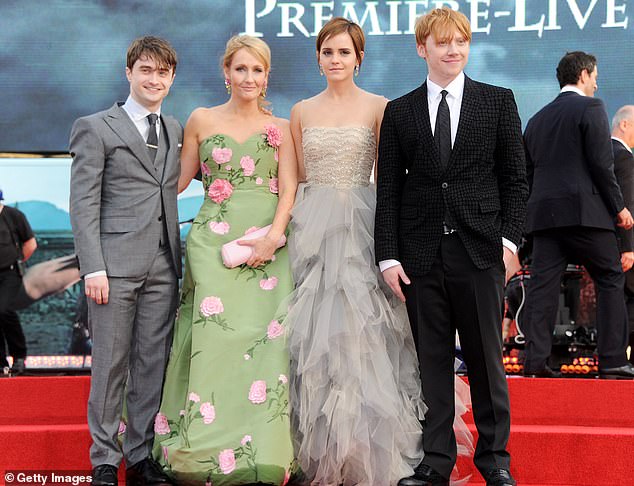 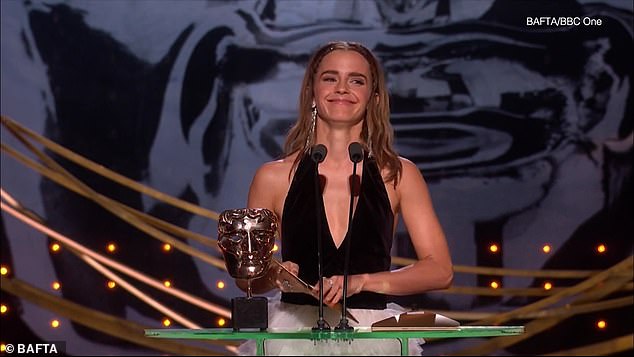 Eddie Redmayne is the lead star of Fantastic Beasts: The Secrets of Dumbledore, which was released in the UK today.

Its radio advert, heard on the airwaves this morning, noticeably cuts JK Rowling’s name, describing the film as coming from ‘the creator of Harry Potter’.

The move could be a decision by Warner Bros to downplay the author’s role in the blockbuster amid the ongoing transphobia row.

Redmayne, who played a trans character in The Danish Girl, was among the first to criticise Rowling for her trans comments.

It came after she tweeted about an article entitled ‘Creating a more equal post COVID-19 world for people who menstruate’ in June 2020.

Rowling had written: ”People who menstruate.’ I’m sure there used to be a word for those people. Someone help me out. Wumben? Wimpund? Woomud?’

In a statement released to Variety , Eddie responded: ”Respect for transgender people remains a cultural imperative, and over the years I have been trying to constantly educate myself…

‘This is an ongoing process. As someone who has worked with both J.K. Rowling and members of the trans community, I wanted to make it absolutely clear where I stand. I disagree with Jo’s comments…

‘Trans women are women, trans men are men and non-binary identities are valid. I would never want to speak on behalf of the community but I do know that my dear transgender friends and colleagues are tired of this constant questioning of their identities, which all too often results in violence and abuse…

‘They simply want to live their lives peacefully, and it’s time to let them do so.’

The actress, 31, who is best known for her role as Hermione Grainger in the film adaptations of Rowling’s books, appeared to take aim at the author when she introduced an award at the star-studded ceremony at the Royal Albert Hall.

Host Rebel Wilson had introduced Watson to the stage by saying: ‘Here to present the next award is Emma Watson. She calls herself a feminist, but we all know she’s a witch.’

Ms Watson then emphasised: ‘I’m here for all the witches’ – an apparent nod to Ms Rowling’s criticism of Sir Keir just days prior.

Despite being cheered by some members of the audience, many viewers on social media criticised Ms Watson for her stance, branding her a ‘woke brat’ for criticising the woman who ‘forged her early career’.

Rowling has faced a continued onslaught of accusations of transphobia since she tweeted about an article entitled ‘Creating a more equal post COVID-19 world for people who menstruate’ in June 2020.

Rowling had written: ”People who menstruate.’ I’m sure there used to be a word for those people. Someone help me out. Wumben? Wimpund? Woomud?’

She was immediately labelled a TERF – trans-exclusionary radical feminist.

Redmayne, who played a trans woman in The Danish Girl in 2015, responded to the tweet, saying he disagreed with her remarks.

He said: ‘As someone who has worked with both J.K. Rowling and members of the trans community, I wanted to make it absolutely clear where I stand. I disagree with Jo’s comments…

‘Trans women are women, trans men are men and non-binary identities are valid.’

He declared: ‘Transgender women are women. Any statement to the contrary erases the identity and dignity of transgender people and goes against all advice given by professional health care associations who have far more expertise on this subject matter than either Jo or I’.

He continued: ‘I realise that certain press outlets will probably want to paint this as in-fighting between JK Rowling and myself, but that is really not what this is about, nor is it what’s important right now.

‘While Jo is unquestionably responsible for the course my life has taken, as someone who has been honored to work with and continues to contribute to The Trevor Project for the last decade, and just as a human being, I feel compelled to say something at this moment.’

The following month, July 2020, Rowling also published an essay on her website in in which she argued that biological sex is real.

In December last year, Rowling was once again forced to deny that she is transphobic as she argued for sex, not gender identity, to be the ‘basis of decisions on safeguarding’.

Grint, who plays Ron Weasley in the beloved film series, admitted in early March that he felt he needed to stand up for transgender people following Rowling’s remarks.

He said that while he was ‘not an authority’ on the debate, he felt he had a responsibility to speak out in support of the trans community as ‘silence is louder’.