Kent Covid variant now dominant in the UK is NOT more deadly but does spread faster than older strains, studies find

The Kent coronavirus variant is not more deadly than the original strain of the virus, more research has suggested.

Scientists agree that the variant spreads faster than its predecessor but the Government’s claim that it is more deadly, made in a TV press conference in January, is being knocked down by emerging scientific evidence.

B117, as the variant is known to scientists, is now dominant in the UK and is taking over Europe, too, as the continent experiences its third wave.

Boris Johnson and Sir Patrick Vallance, the UK’s chief scientist, told the public three months ago that the variant could be 30 per cent deadlier, but studies have since debunked the claim.

The new research, published today in the Lancet and Lancet Infectious Diseases journals, adds to a study released by Public Health England in March that also found no proof the variant has a higher death rate.

B117 may kill more people overall because it spreads faster so causes bigger outbreaks, but the direct proportion of infected people who die is no higher. 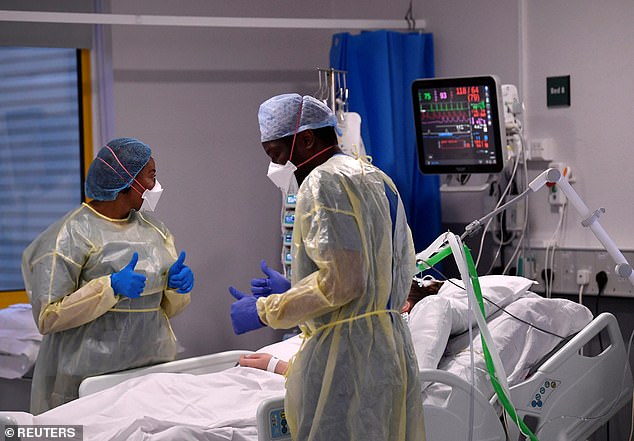 Scientists agree that the Kent variant spreads faster than its predecessor but the Government’s claim that it is more deadly, made in a TV press conference in January, is not backed up by evidence (Pictured: NHS medics look after a seriously ill patient in Milton Keynes University Hospital in January) 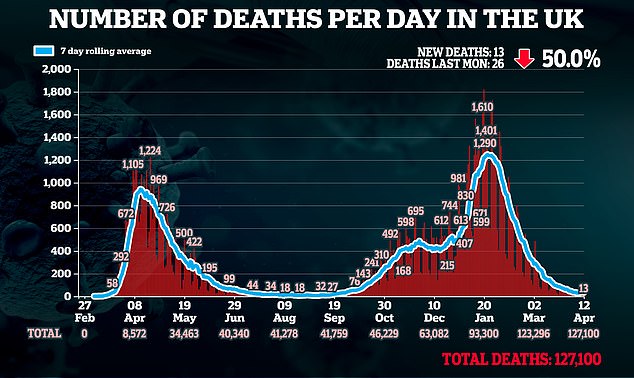 ‘It’s a relief that [researchers] have finally debunked the idea that the B117 variant causes more severe disease,’ said Dr Julian Tang, a University of Leicester virologist who was not involved with the study.

One of the studies was done by University College London Hospitals researchers using patient data from 2020, and another by experts at King’s College London, who used data from the Covid Symptom Study app.

A Public Health England study published in March found that the Kent coronavirus variant is not more deadly than the original strain.

PHE’s analysis of more than 5,500 Covid patients in the second wave found there was ‘no difference’ in mortality rates between the strains in the month after getting infected.

However, the agency discovered people who caught the Kent B117 variant were a third more likely to need hospital treatment than those infected with the older version, though the risk remained tiny for the majority of people.

Among the researchers behind the study were ‘Professor Lockdown’ Neil Ferguson, the SAGE scientist whose gloomy forecasts of the first wave plunged the country into its first shutdown, and Dr Susan Hopkins, one of PHE’s chief epidemiologists.

The finding came just months after No10 used a dramatic press conference to warn the public the Kent variant was at least 30 per cent deadlier.

The PHE study, which is still to be published, looked at more than 5,500 people in England who tested positive for the virus between October and December last year.

About half were infected with the original strain and the others had B117.

A total of 131 needed hospital treatment and 76 died within 28 days of their test.

Initially, the researchers said there was no evidence of a link between the Kent strain and an increased likelihood of needing hospital care.

But after adjusting for age, sex, ethnicity, underlying health conditions and other Covid risk factors, they found a 34 per cent heightened risk.

Writing in the study, the researchers said: ‘We observed an increased risk in hospitalisation associated with the variant compared to wild-type cases.

‘However, no significant difference in the risk of mortality was observed.’

The UCL research looked at patients admitted to two hospitals in London in November and December last year when the Kent variant was taking over.

It compared the severity of illness and rates of death between people testing positive for B117 and those with other versions of the coronavirus.

There was no significant difference, therefore, suggesting any variant was more deadly than another.

One of the researchers, Dr Eleni Nastouli, from University College London Hospitals NHS Foundation Trust, said: ‘One of the real strengths of our study is that it ran at the same time that B117 was emerging and spreading throughout London and the south of England.

‘Analysing the variant before the peak of hospital admissions and any associated strains on the health service gave us a crucial window of time to gain vital insights into how B117 differs in severity or death in hospitalised patients from the strain of the first wave.’

The second study, by King’s College London, analysed data from almost 37,000 people who use the Covid Symptom Study app.

Using self-reported data the team compared figures from across London, the South East and the East of England during a 13-week period when the variant was becoming dominant there.

They compared the proportion of tests that were known to be positive for the new variant with any changes in the rates of death or severe illness before the strain appeared.

It found there was no statistically significant change in the effects of being diagnosed with Covid.

People reporting that they had tested positive during the time when the variant was taking over were not more likely to have more symptoms, didn’t have different symptoms, didn’t develop severe Covid more often and didn’t have a higher rate of long Covid, the study found.

It did find, however, that the virus spread faster – the relative R rate, or number of people infected by each person with the virus, was 1.35 times higher, the team said.

King’s College’s Dr Mark Graham said: ‘Reassuringly, our findings suggest that, despite being more easily spread, the variant does not alter the type or duration of symptoms experienced and we believe current vaccines and public health measures are likely to remain effective against it.’