MINNEAPOLIS, Minn. – FIRST ON FOX: The Black Lives Matter protester charged with intimidating the judge presiding over the trial for former police officer Kim Potter in the shooting of Daunte Wright has been extradited to Minnesota ahead of his first court appearance Tuesday.

Cortez Rice, 32, of Minneapolis, is currently being held at Hennepin County Jail on a $50,000 bond, the Hennepin County Attorney’s Office tells Fox News Digital. His first court appearance is scheduled to take place at 1:30 p.m. CT.

Rice was taken into custody on Nov. 30 after Wisconsin State Patrol pulled him over for speeding on a freeway, court records show. He was allegedly operating without a valid driver’s license. He was transported Monday night from Waukesha County Jail back to Minnesota.

Rice is charged with felony harassment with aggravated violations, tampering with a juror and retaliating against a judicial officer, in connection to a Nov. 6 protest at an apartment building he and other demonstrators believed to be where Hennepin County Judge Regina Chu lives.

Chu initially issued an order banning cameras from the courtroom from the trial, prompting Rice and other protesters to show up on Nov. 6 to an apartment building in downtown Minneapolis, according to the criminal complaint obtained by Fox News Digital. 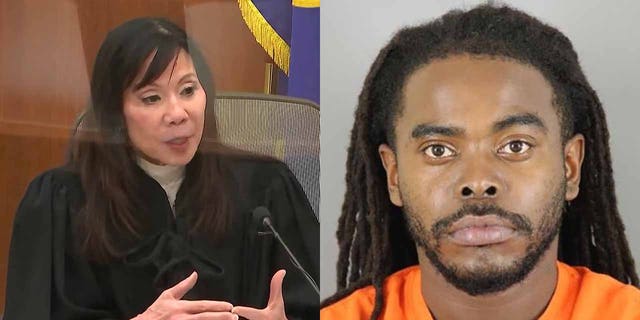 Regina Chu (left) is presiding over the trial for Kim Potter. Cortez Rice (right) is charged with intimidating the judge to allow cameras in the courtroom.
(AP/Waukesha County Jail )

While other protesters remained outside, Rice entered the building while livestreaming himself on YouTube, “thus recording his comments in addition to the demands made by the group to reverse the order,” the criminal complaint first unsealed on Friday says.

Once in the hallway outside a 12th floor unit, Rice states, “We’s tight on her a**. We on her heels. What she think… we want camera. The people deserve to know.”

He also added that he is “waiting for the gang to get up here.”

Once back down in the lobby, another protester asks him if they are at the correct location and Rice responds, “That’s her sh** right there. She can hear us.” Rice joins the other protesters again outside and tells others in the crowd where he believes Chu’s apartment is located.

Daunte Wright, left, was killed in an April traffic stop. Kim Potter, right, is charged with manslaughter in his killing. Broolyn Center, Minnesota city leaders are considering a resolution to give the city manager the power to declare a curfew as Potter prepares to stand trial.
(Facebook/Hennepin County Sheriff)

Calling out Chu’s name, Rice then shouts, “We demand transparency. We’d hate you to get kicked out of your apartment.” A different protester says the demonstration is a “trial run” and they’d be back.

Interviewed by police afterward, Chu told investigators “she believed she was the target of the Defendant and the other protesters,” the complaint says. “She further stated that it was her belief the intention was to intimidate her and to interfere with the judicial process.”

It’s unclear if that apartment was where Chu currently lived or if she was present at the time.

Chu had initially ruled in August that she would not allow recording or livestreaming of Potter’s trial. Days after the incident involving protesters targeting what was believed to be her home, the judge cited the state of the coronavirus pandemic and the delta variant in her reversal in now permitting the livestream.

In changing course about the livestream, Chu wrote in her Nov. 9 ruling that the timing of the protest was unfortunate but had no impact on her decision. She affirmed, “The bedrock of our democracy is the rule of law and that means we must have an independent judiciary and judges who can make decisions independent of the political winds that are blowing, protests or attempts at intimidation.” 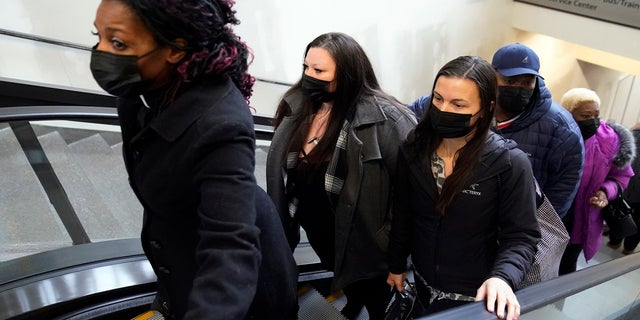 A unidentified member of the clergy, left, leads the family of Daunte Wright, including his mother Katie, second from left, as they arrive Wednesday, Dec. 1, 2021 at the Hennepin County Government Center in Minneapolis for the second day of jury selection for former suburban Minneapolis police officer Kim Potter, who says she meant to grab her Taser instead of her handgun when she shot and killed motorist Daunte Wright.
(AP Photo/Jim Mone)

About a month before the incident, Rice had appeared before Chu on Oct. 4 after allegedly violating his probation following a 2017 conviction for illegal weapons possession. Court records show the judge at that time ruled to allow Rice to continue probation instead of sending him back behind bars.

Potter is charged with first- and second-degree manslaughter in the April 11 shooting of Wright during a traffic stop in the Minneapolis suburb of Brooklyn Center. It happened while tensions were high during the trial for former Minneapolis police Officer Derek Chauvin, who was convicted in the murder of George Floyd. Opening arguments for Potter’s trial are expected to begin Wednesday.