England’s Lionesses returned to their £63-a-night hotel today after their stunning 4-0 win over Sweden to reach the final of the women’s Euros.

Alessia Russo’s fantastic backheel helped England to brush aside Sweden, one of the traditional powerhouses of women’s football, in the semi-final at Bramall Lane in Sheffield.

Beth Mead, Lucy Bronze and Fran Kirby also netted to set up the tournament decider with either France or Germany at Wembley on Sunday.

The squad received a flood of congratulations from across the footballing world as they were pictured travelling back from The Quays Hotel in Sheffield to the Lensbury Hotel in London. 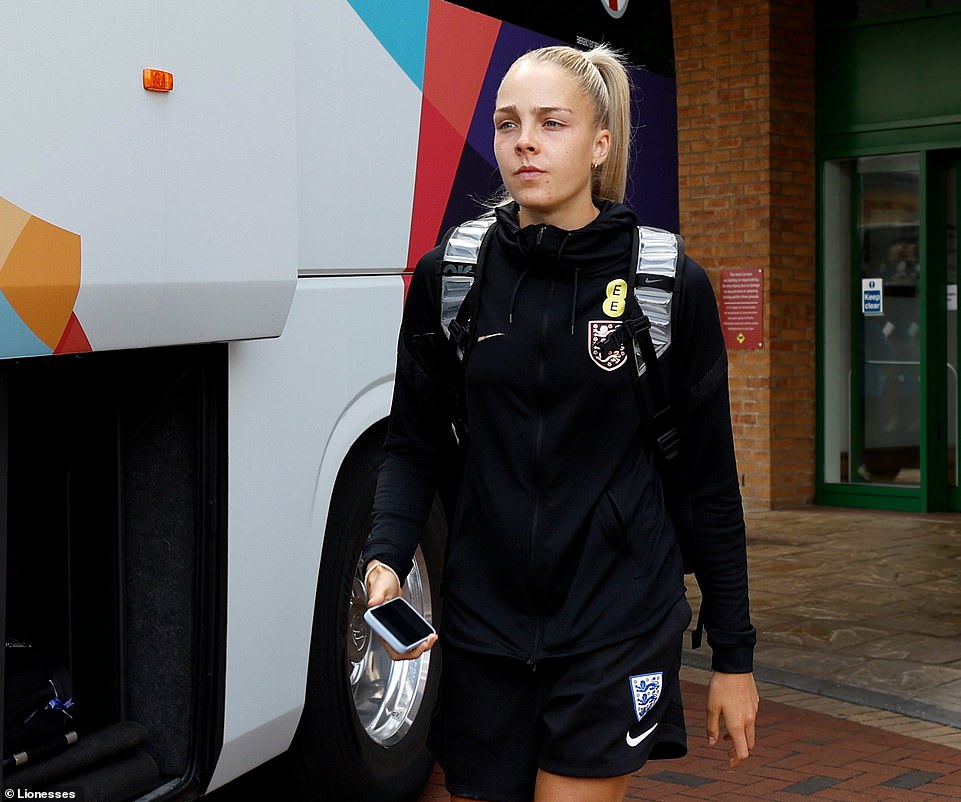 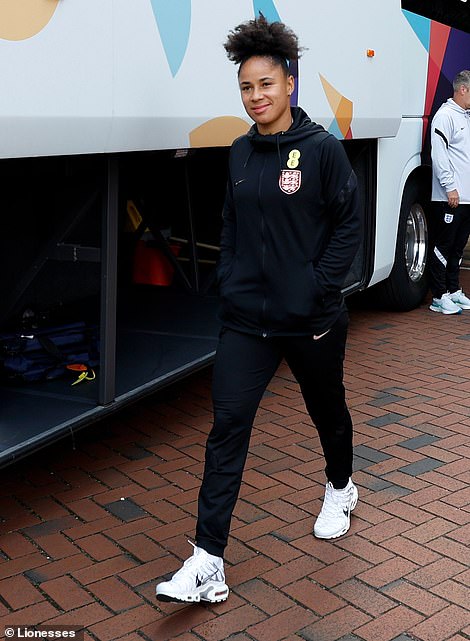 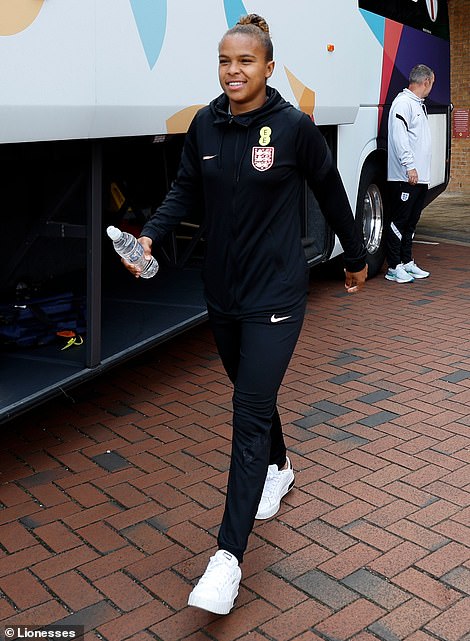 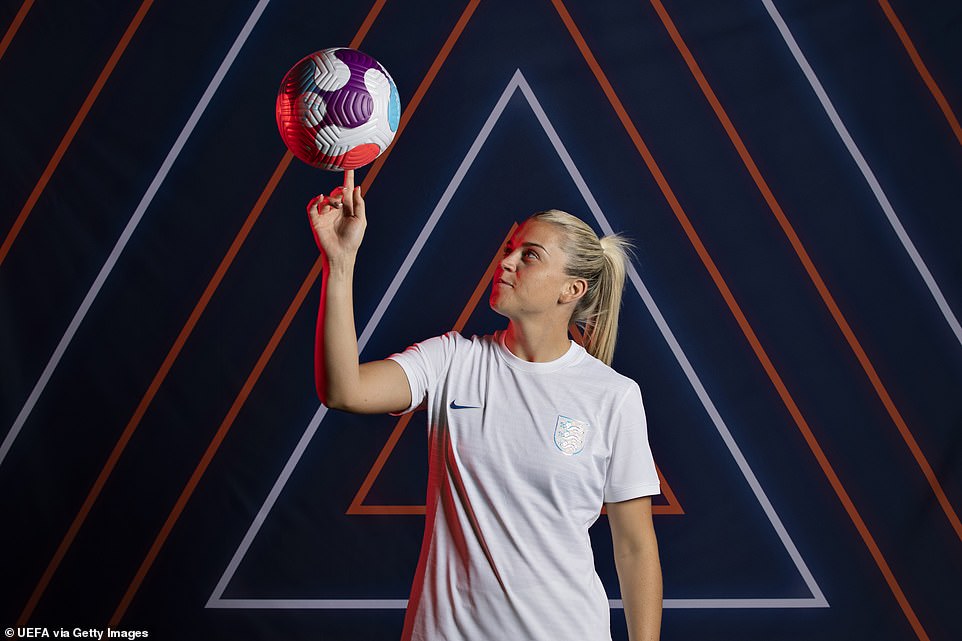 The England stars stayed at The Quays Hotel for their match on Tuesday night.

While the four star Best Western hotel may not boast the same luxuries as the accommodation the England men’s team has become accustomed to over the years, the Quays describes itself as an ‘oasis of calm’ equipped with a spa, a fully equipped gym, a 20-metre indoor pool and a fitness room.

Other than their trip to Sheffield, the Lionesses have been staying at London’s The Lensbury Resort throughout Euro 2022 and will have four days to train in West London before the final.

The Lensbury is a luxury hotel and resort on the banks of the Thames with elite sports training facilities which have helped prepare the England squad for their brilliant run through the tournament so far.

A record 11.3 million people watched England’s clash against Sweden, making the squad’s top display one of the most-watched television events of the year. 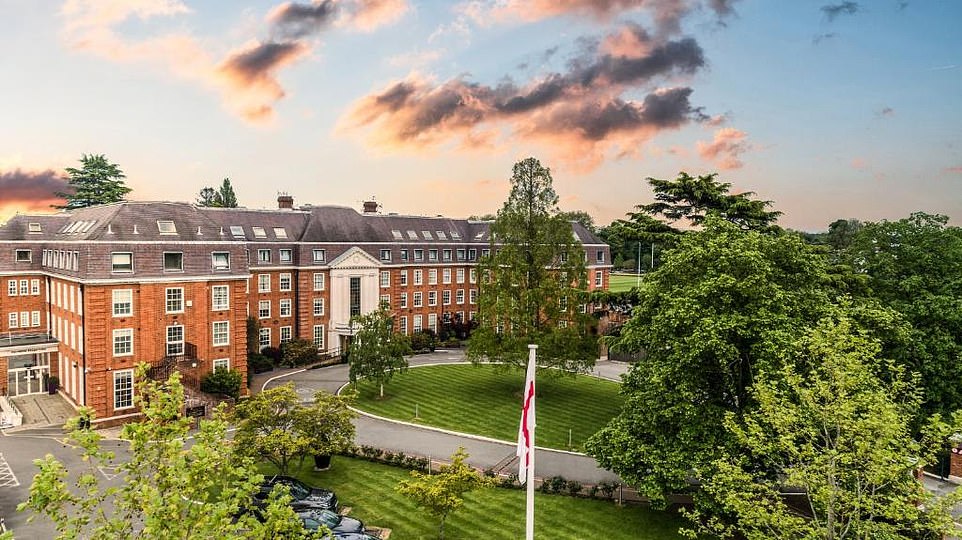 England have been based at the Lensbury Hotel in Teddington, West London throughout their run at Euro 2022 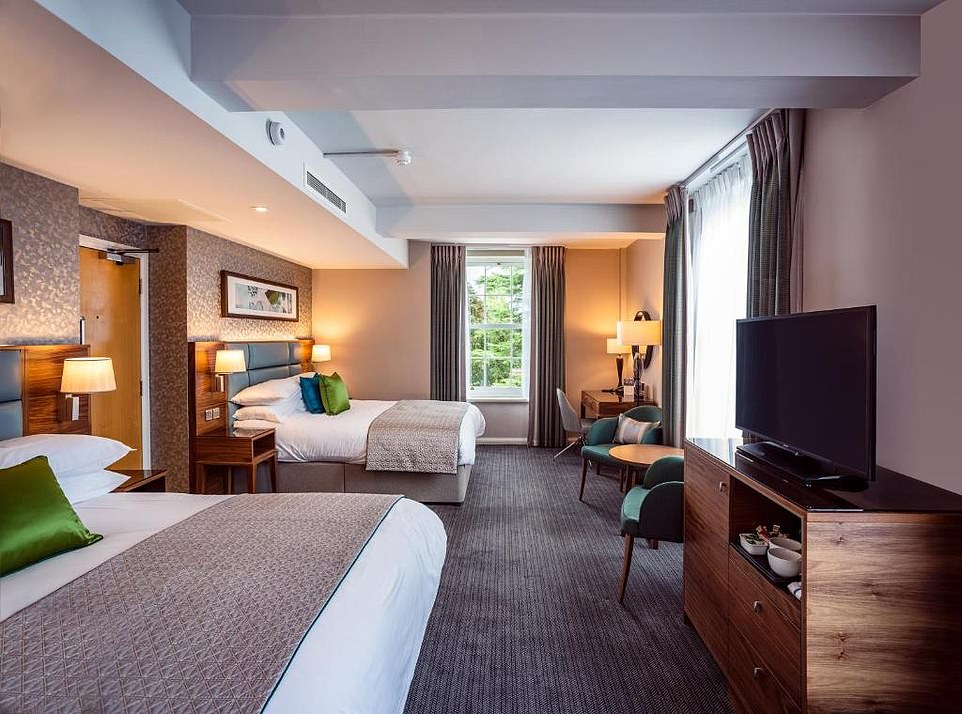 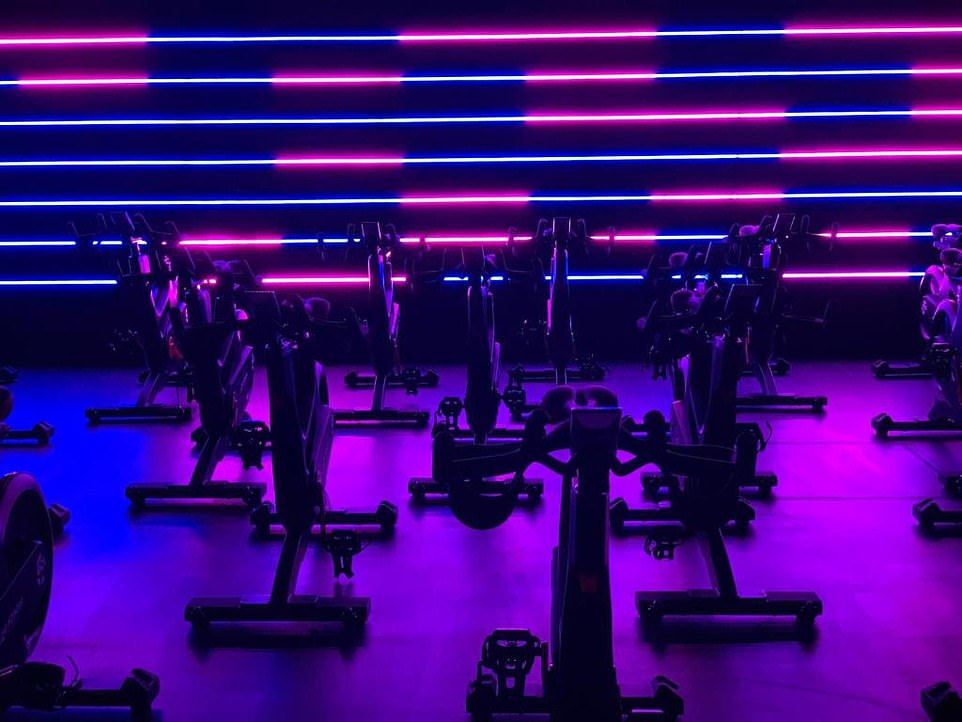 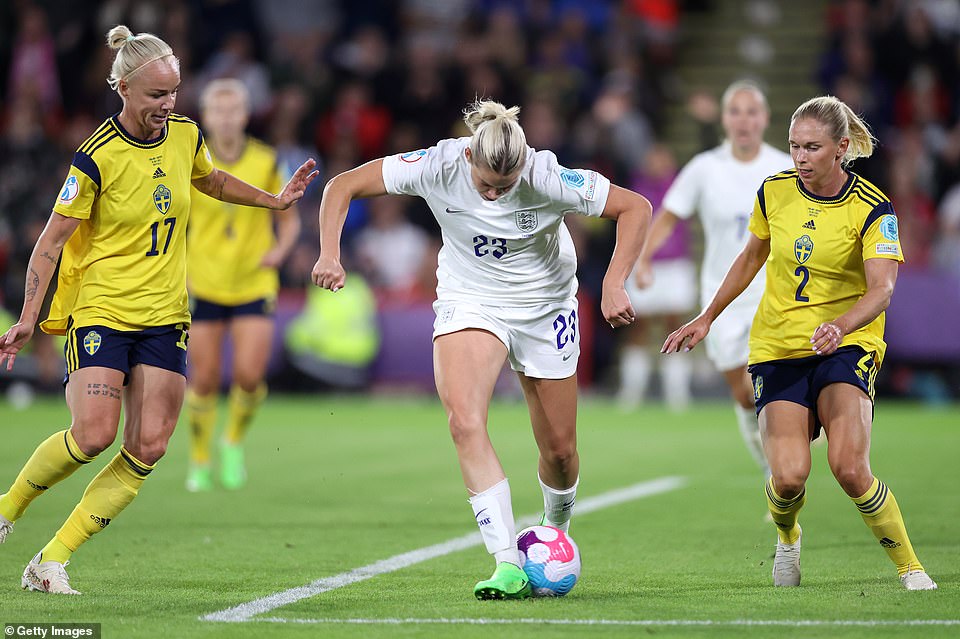 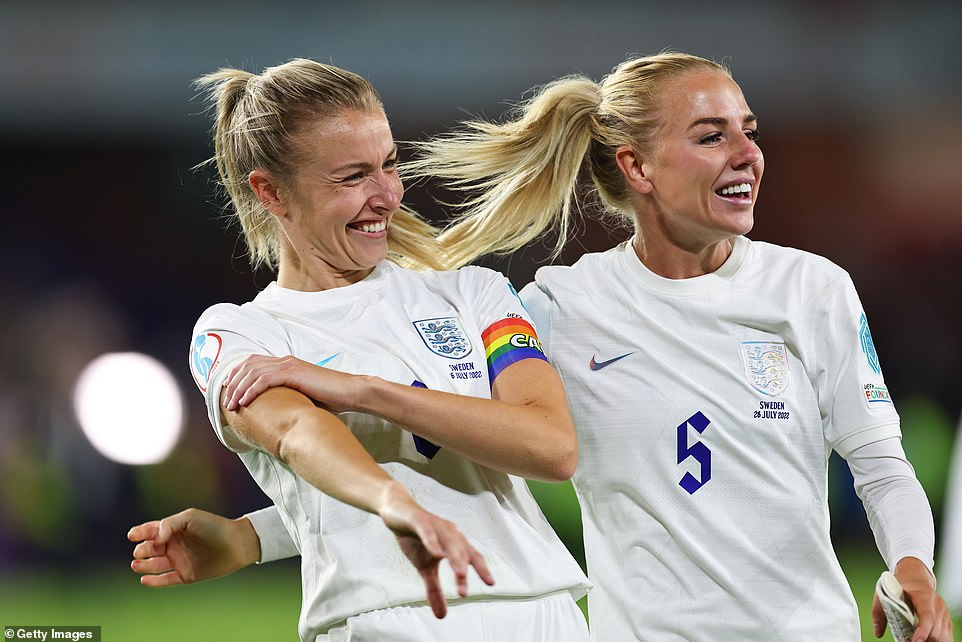 Striker Alessia Russo proved to be one of the stars of the show after coming off the bench to score – as she has done throughout the tournament, making her its joint-top scorer.

Arsenal legend Ian Wright likened Russo to Lionel Messi – arguably one of the best ever to play the men’s game – for her contribution last night. Wright called her: ‘”Lessi”, not Messi, for what she [Russo] has done when she comes on. I don’t know what she has to do to start a game.

‘The improvisation is fantastic. When she came on she instantly made an impact. She links play. I’m not sure what more she needs to do to start.’ 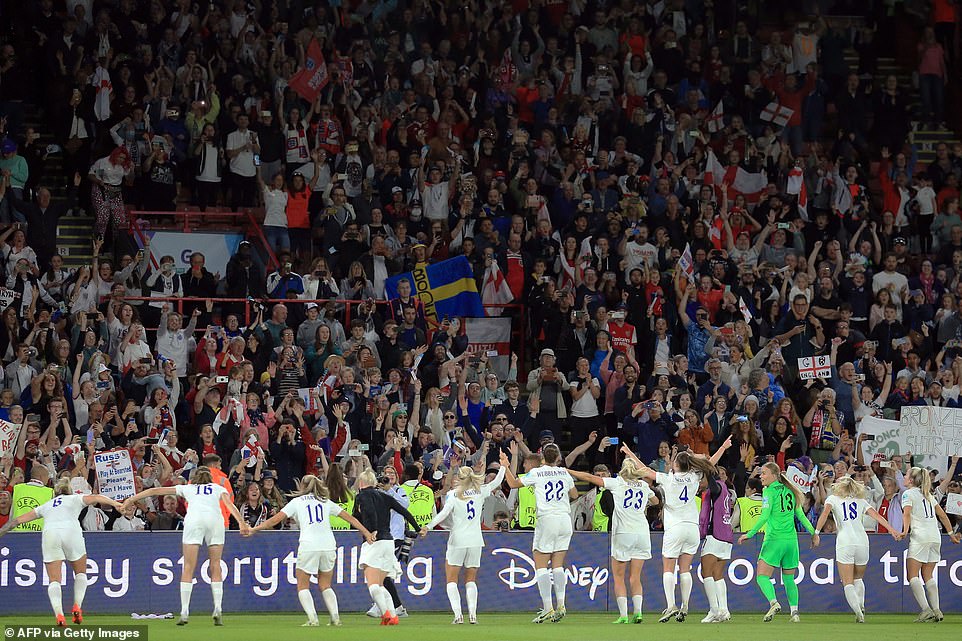 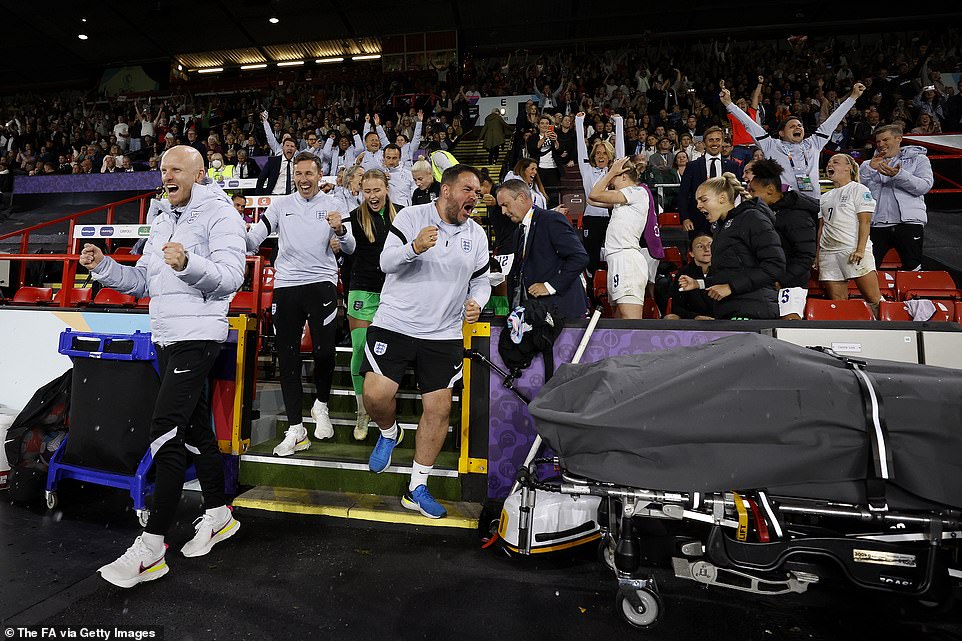 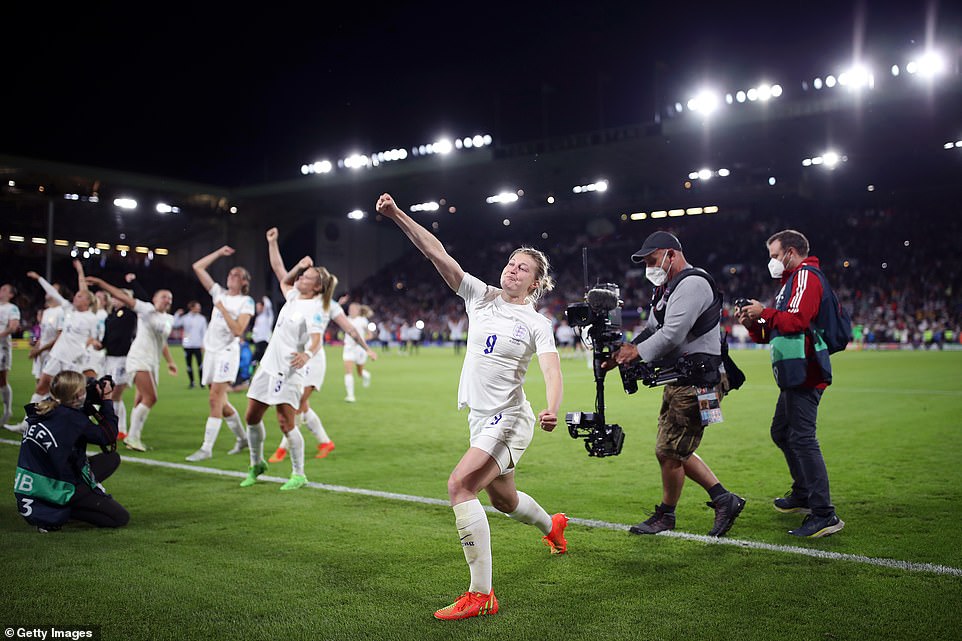 Dancing for a nation: Schoolgirl, eight, who was filmed dancing along to Sweet Caroline as she celebrated England women’s historic Euro 2022 semi-final win says she wants to follow in the footsteps of her heroes

A little girl whose celebrations after the Lionesses reached the Euro 2022 final went viral says she wants to follow in their footsteps to become a footballer.

The footage of the girl, from Wakefield, West Yorks, in absolute raptures was caught on BBC footage and broadcast live to the nation.

Tess was wearing a full England kit for the clash at Sheffield’s Bramall Lane and was picked out by the camera operator as she belted out the Neil Diamond anthem.

Speaking to the BBC this morning she said: ‘Going through my mind was, when I’m older I want to be a footballer.

‘I was looking at how they were celebrating and thinking of how I was going to celebrate. 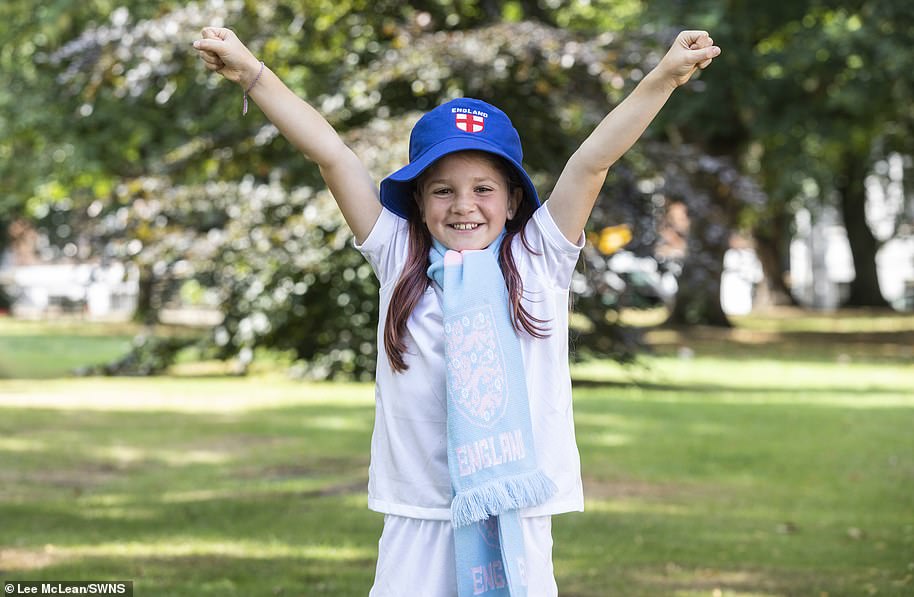 Tess Dolan, 8, has become an Internet sensation after being filmed dancing at the England Women’s game last night in Sheffield 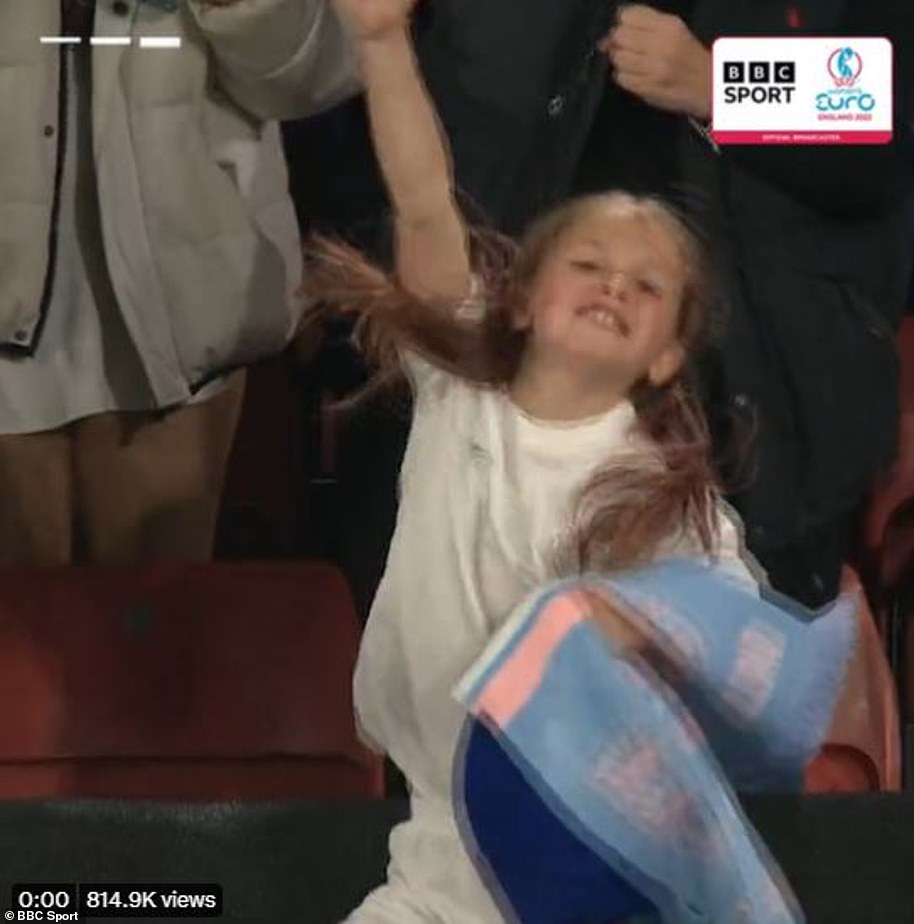 Schoolgirl Tess, eight, went viral after her celebrations went live to the nation on the BBC 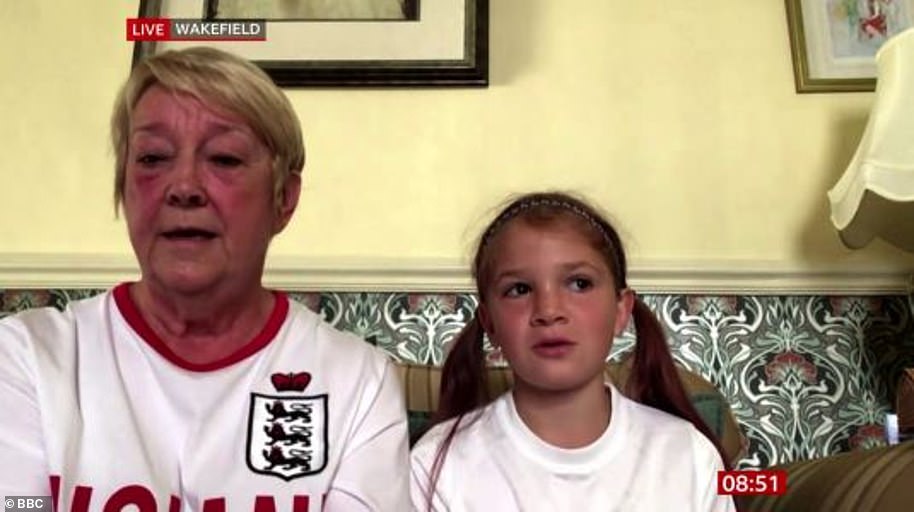 Young England fan Tess, 8, spotted going wild to Sweet Caroline at Euros had no idea she was being filmed: ‘It was crazy’

‘Normally they look at the big screen and, you can see, I’m on telly, but didn’t know I was being filmed!’

Ian Wright also appeared on the show and said her celebration would go down in history.

He commented: ‘When I saw Tess celebrating yesterday, I thought, those scenes are iconic scenes.

‘The girls, when they see that, they will be inspired by that. When they were younger, they couldn’t have the dream you are having right now.’ 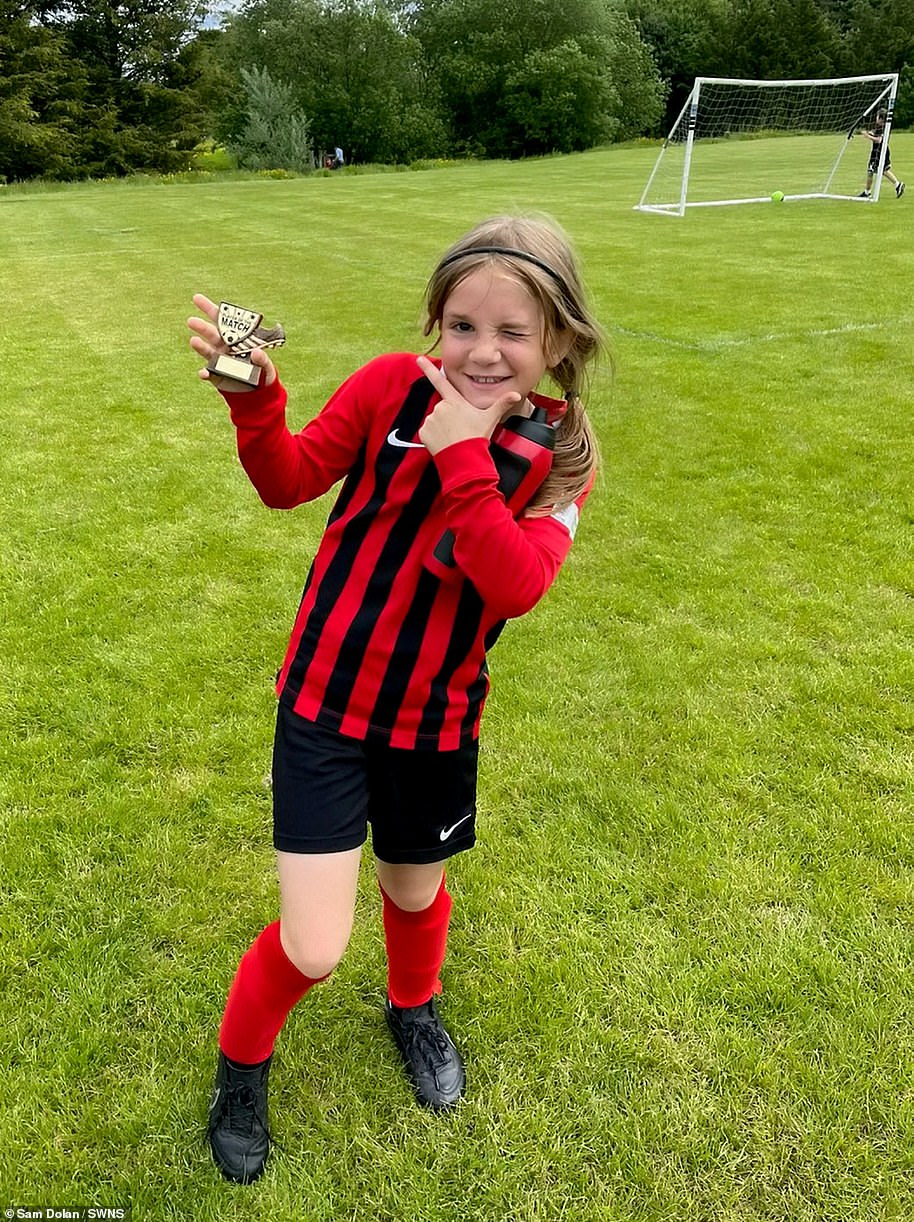 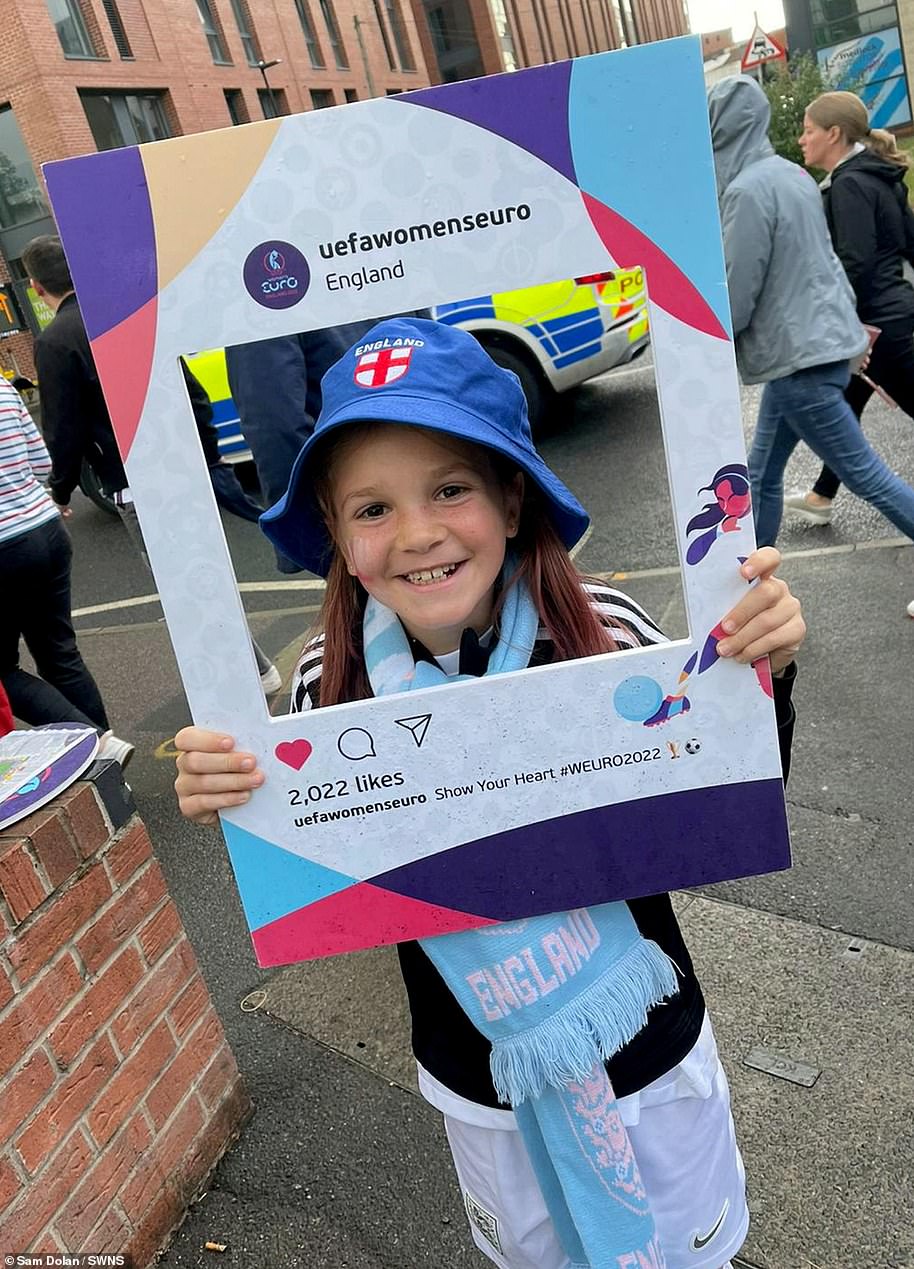 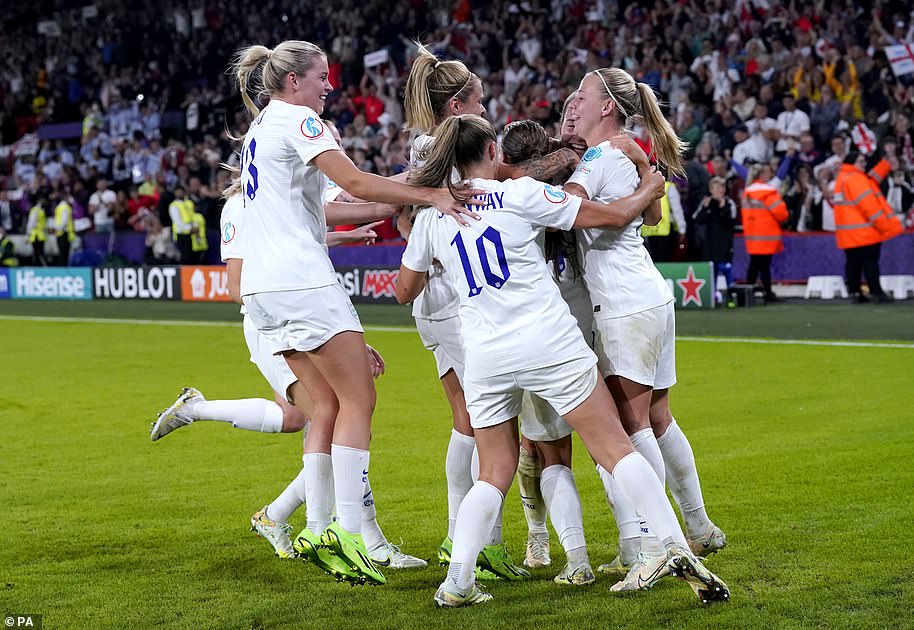 Tess, of Knaresborough, North Yorks., was among the 28,000 frenzied fans inside Bramhall Lane to cheer England to victory on Tuesday night.

But despite a dominant performance on the pitch – including a cheeky 68th-minute back-heel by her favourite player Alessio Russo – Tess was the real star of the show.

As England gaffer Wiegman conducted her post-match interview with a tv reporter, cameras panned to the crowd and showed Tess’s now-iconic dance moves.

Within minutes, her mum Sam Dolan’s phone was ‘going mental’ from pals who had seen the clip on tv and across social media, where it quickly went viral.

Such was the popularity of the clip, she appeared on breakfast tv this morning (Wed) where she was interviewed by England and Arsenal legend Ian Wright.

Tess said: ‘It was the best football match I’ve been to so far.

‘It was amazing. I didn’t know I was on tv until my mum got lots of text messages from people. I was just dancing and enjoying myself.

‘I was singing Sweet Caroline and then my mum started getting messages.

‘It’s really weird to be on the tv, but it feels amazing.’

The Lionesses won 4-0 to set up a date against either Germany or France in Sunday’s Wembley final as they bid to win a first-ever European Championship title.

Manchester United forward Alessia Russo scored England’s third, threading her backheeled shot through the legs of two Sweden players and into the net.

England threw off a shaky start in the semi-final when Mead turned sharply in the box and fired home after 34 minutes.

They doubled their lead through Lucy Bronze’s header not long after the restart and Russo’s audacious effort was followed up by Fran Kirby’s chip of Sweden keeper Hedvig Lindahl.