Homicide squad detectives have arrested a man after a 60-year-old was found dead inside a house in Melbourne’s west on Wednesday morning.

Victoria Police said emergency services went to Primula Avenue at Brooklyn about 3.30am after reports a man had been found unresponsive at the property. On arrival, they found him dead.

The deceased man lived in Brooklyn.

Police arrested the 45-year-old man at Seddon on Wednesday afternoon.

Police said the exact circumstances of the incident were yet to be determined and the man would be interviewed by homicide squad detectives.

Nine News reported the arrested man allegedly had a knife in his car, and footage showed him in a police vehicle rocking his head back and forth.

“At this stage detectives believe all parties are known to each other,” police said in a statement. 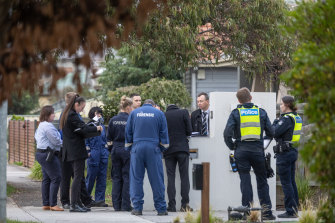 Police at the Brooklyn home where the man’s body was discovered on Wednesday morning. Credit:Jason South