Federal Labor MP Matt Thistlethwaite is savouring an oyster as we chew the fat on what he calls the “barbecue stopper” of 1999: the Australian republican referendum. Seafood may be on our plates, but the move for an Australian head of state is on the menu.

“I was quite involved in the ’99 campaign,” recalls the member for the Sydney seat of Kingsford Smith. “Remember the intensity? Everyone was arguing about it across the nation.” 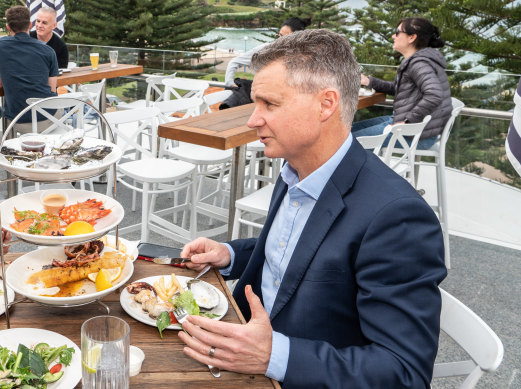 Assistant Minister for the Republic Matt Thistlethwaite dining on the rooftop of the Coogee Legion Club.Credit:Flavio Brancaleone

“I was the campaign manager for the Australian Republican Movement for this electorate. So I’ve still got the scars of ’99, and am acutely aware of what the pitfalls and dangers were about the republic debate and want to try to rectify that this time and get it right.”

The former union organiser, lawyer, president of NSW Young Labor, and ALP general secretary is now the Albanese government’s assistant minister for the republic, our first ever. At the opening of the 47th parliament in July, the most culturally diverse this nation has ever elected, he said swearing allegiance to the Queen was “ridiculous and archaic”.

“It does not represent the Australia we live in and it’s further evidence of why we need to begin discussing becoming a republic with our own head of state. We are no longer British,” he said at the time. It’s a theme he’s been passionate about since becoming the first member of his Catholic family to go to university. 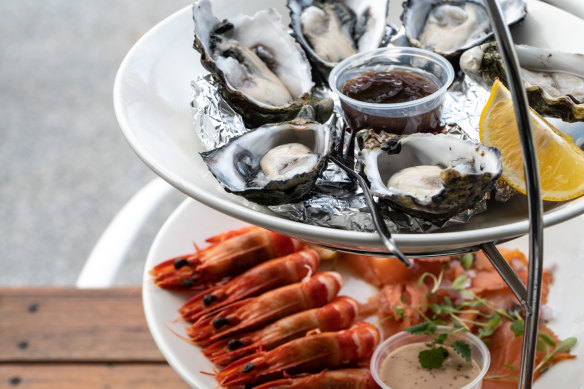 “I was really attracted to the arguments Paul Keating was putting up in the early ’90s about Australia finding its way in the world as an independent mature nation, particularly in the Asia Pacific. We moved away from the United Kingdom for our security alliances, our defence alliances, our trading relationships were increasingly with Asia. It was our neck of the woods. We were the lead economy in the Pacific. It made sense for us to think about standing on our own two feet with our own head of state. That’s been a passion of mine since uni days and I said in my maiden speech to the parliament that I wanted to use my time there to try and bring it back onto the agenda.”

It was the surf that led Thistlethwaite to a career in politics. Born in Maroubra, the eldest of three (the others are twins) and educated by Marist brothers, he was signed up, age 13, as a member of the Maroubra surf club by his Qantas steward father, and eventually became president.

“I’ve been in and around the beach and in the water since I was a kid, particularly surfing at Maroubra. I’m not a ’Bra boy. But I grew up with them all. And I know a lot of them still,” he says. 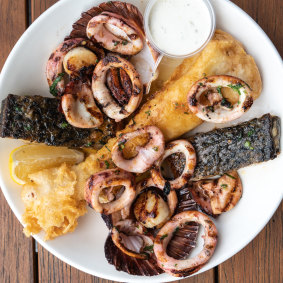 “In my early 20s, I got on the management committee of the surf club and that’s when I started interacting with some of the local councillors, and when I was 21 one of the Labor councillors said ‘Why don’t you come and join the local Labor Party?’”

There he met local member, now mentor, former Labor heavyweight Bob Carr, whom he still walks with regularly throughout the coastal electorate. Thistlethwaite thought an understanding of politics might help his studies: first economics, then law.

On graduation, he started working as an organiser for the Australian Workers Union, helping shearers, cherry and cotton pickers and migrant women working in western suburbs factories to join the union, to help them get better work conditions and workplace enterprise agreements.

“I would just explain to them what their rights at work were and how to have a better chance in life, really. I was a kid growing up in the eastern suburbs in a middle-class family. But working with those people was the real inspiration for me to keep doing what I was doing and to really try hard to get into politics, because I knew that if you’re truly going to make a difference, you had to be in the room where it happened and have a say.” 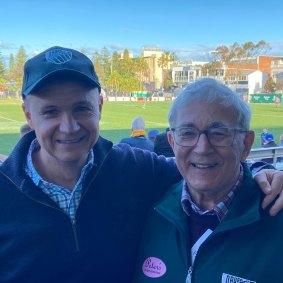 After a decade of working toward that goal in the ALP, he thought his chance had come in 2004 when Laurie Brereton, then member for Kingsford Smith, resigned.

“Laurie resigned on a Friday. And I remember waking up on the Sunday and picking up the newspaper and seeing on the front page that Peter Garrett was going to be the next ALP candidate for Kingsford Smith, so that was pretty disappointing.”

He was 32 at the time, but instead of throwing in the towel after then-Labor leader Mark Latham parachuted Garrett in, he became the former Midnight Oil singer’s campaign adviser and friend.

Thistlethwaite was elected to the Senate in 2010, then in 2013 to the House of Representatives, on Garrett’s retirement. He is a well-known face in one of the safest Labor seats in the country, not just because of his activism in politics, the surf club, swimming and social groups. 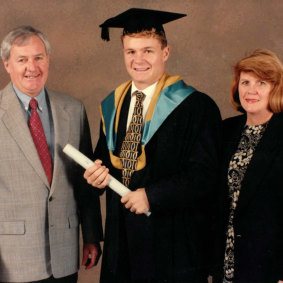 Matt Thistlethwaite with his parents at his university graduation.

He’s also married Coogee “royalty”: one of the eight offspring of beloved local doctor Joe Casamento, whose retirement celebrations as Randwick rugby club’s doctor of 40 years Thistlethwaite helped organise last month on Coogee Oval. He’s more of a rugby league than union guy, sharing a passion with his PM for the local Rabbitohs (they marched together in 2000 to save South Sydney from NRL exclusion).

He turns 50 next Tuesday, now lives in Matraville with his nurse wife Rachel and their four daughters (14, 12 and twins who are seven). He feels his daughters’ demographic: those who weren’t born, or are too young to remember 1999, will be key in securing an Australian head of state.

“I think people say that young people are disinterested in politics and preoccupied with other things, but I find completely the opposite. When you sit down and talk to young people, I think that they’re very well-informed and deeply engaged. Now a lot of that comes through social media. My daughter’s in year 8, and I’m blown away by the number of girls in her year who can quote almost word for word, Julia Gillard’s misogyny speech,” he says.

TikTok rather than door knocking will be a more crucial campaign tactic if the Albanese government wins a second term, and as promised Thistlethwaite gets to make the republic a focus. 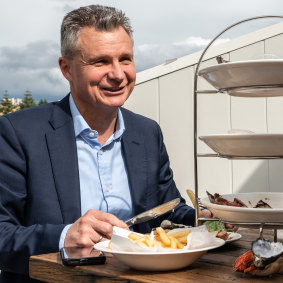 “The Voice [to parliament] is our priority this term … it should come first because that’s the great injustice in our Constitution. It’s the great lie about Australian history. If we can right that wrong with a referendum the next natural progression is …shouldn’t we have one of our own as head of state? It’s time for the kids to grow up and leave home.”

He says his key priority for the republic is an education campaign to explain three things.

“Firstly, that the Queen of England is our head of state. You’d be surprised how many people do not know that – many of them say ‘Oh, isn’t the prime minister our head of state?’ Next, that we can have an Australian in the role and that there are alternative models about how we appoint them,” he says, sipping mineral water between peeling prawns and chomping on chips.

“Basically, the future is ours to determine. And we’ve got this unique opportunity with a queen coming to the end of her reign, for us to now lay the groundwork so that when that does happen in the future, we’re ready to go with a campaign and a chance to really create a truly independent nation.” 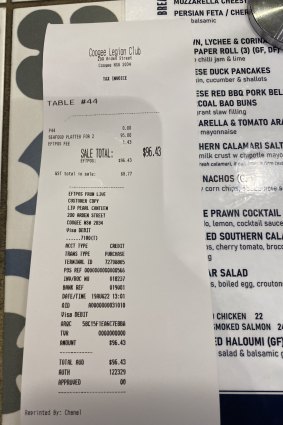 Lunch with Matt Thistlethwaite – the bill.

But how to convince conservative constituents of our constitutional monarchy, some still bruised from the debate and defeat of the referendum 23 years ago, under the prime ministership of John Howard?

“The key thing about the success of a referendum is having a prime minister who’s committed to it and willing to campaign for it and put it on the agenda. The second thing is bipartisanship. There are lots of Liberals and Nationals who are republicans. The big unknown at the moment is Peter Dutton. I will meet with him and I’ve had meetings with the Australians for a Constitutional Monarchy and the Monarchist League. I want to make this an issue that unites Australians, not divides.”

He points to places we could look to for inspiration. Ireland – where the elected president is revered and respected, and sits alongside a Westminster system of parliament with a prime minister. And Barbados, which became a republic last year.

“Barbados did it in consultation with the royal family. And they invited members of the royal family to the handover ceremony. When you look at the Commonwealth now there are 54 nations, 36 of them are republics. So we are very much in the minority.”

“When you think about it, the average Australian’s relationship with the royal family won’t change. They will still be invited here. They’ll still come here and be on the front pages of our and magazines and newspapers when they get married and have kids and for the right reasons,” he says.

But he points to the Scott Morrison fiasco of the Governor-General appointing him to several portfolios, and believes an Australian head of state, swearing allegiance to the Australian people rather than a foreign sovereign, would not have let that happen.

As for other ambitions, he is coy.

“If I could become a cabinet minister one day I think I’d be pretty happy,” he says.

“But most importantly, if I can have a hand in Australia becoming a republic, I will have felt that I’ve achieved quite a bit in politics, and that’s one of the principal reasons why I went into it. That’s my major aim at the moment. It’s not becoming prime minister or any other position, but it’s trying to get at an Australian head of state,” he says.