The Mid-South is bracing for more severe weather as residents try to pick up the pieces in the aftermath of savage tornadoes that left several people dead and many homes destroyed.

As many as 10 tornadoes ripped through Alabama and Georgia on Thursday, killing at least six people and causing widespread damage to homes and public property. The tornadoes uprooted 100-year-old trees, stripped roofs from houses and seriously damaged schools and businesses. 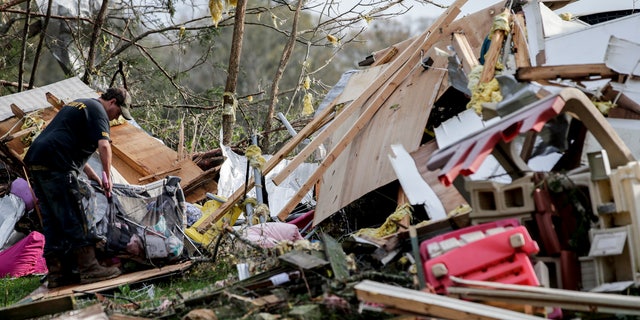 Residents begin the clean up process after a tornado touched down Friday, March 26, 2021 in Wellington, Ala. A tornado outbreak has ripped across the Deep South leaving paths of destruction. (AP Photo/Butch Dill)

Even Vermont saw a tornado that injured at least two people and destroyed a home, NBC 5 reported.

Charlene Watson’s apartment building in Alabama was ripped apart by the tornado. She awoke to sirens and moved as quickly as she could to the basement of her building before the twister tore the roof off her building, according to a report.

“Just be thankful for everything you’ve got, because you are not promised the next day. Nothing is,” Watson said.

The National Weather Service (NWS) is forecasting that the region will not have a chance to rest as excessive rainfall and severe thunderstorms create a moderate risk of flash flooding.

“Today will be another busy weather day across the Mid-South and Tennessee Valley,” the NWS Weather Prediction Center tweeted Saturday. “Heavy rain/flash flooding, plus the threat of severe thunderstorms are possible through tonight.” 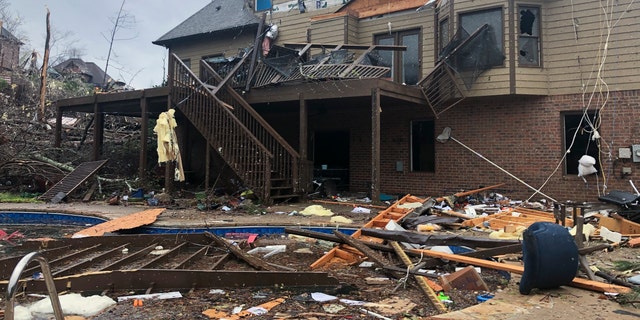 Damage is seen to a home after a tornado passed through the Eagle Point subdivision, Thursday, March 25, 2021, near Birmingham, Ala. (AP Photo/Butch Dill)

The Mid-South will also see a low chance — up to 10% — of more tornados, according to the center.

The day will start sunny with warm temperatures, but a cold front sweeping through the region in the afternoon Saturday will upset the systems, bringing the more-severe weather.

NWS St. Louis has forecast a chance for large hail and damaging winds in the area.

White House press secretary Jen Psaki expressed condolences to the victims Friday and said the Biden administration was in touch with state and local leaders.