How do you spell ‘m-o-r-o-n-i-c’? The extraordinary anagram conspiracy Covid deniers claim ‘proves’ mutant variant is a government hoax

Covid conspiracy theorists are bizarrely claiming the new mutant strain is a government hoax because an anagram of Omicron is ‘moronic’.

Another re-arranging of the words being seized upon by anti-vaxxers and Covid deniers is ‘oncomir’, which are molecules associated with cancer.

Hardcore virus deniers such as disgraced celebrity chef Pete Evans are spouting the ridiculous new ‘proof’ that Omicron is a hoax on social media sites such as Telegram.

The potentially deadly strain has already made its way across the globe to Australia, the UK and the US.

Two international travellers who tested positive to the new strain are being quarantined in Sydney, while another case was confirmed in the Northern Territory on Monday afternoon.

While most Aussies are terrified of catching the deadly virus, chronic misinformation spreaders have seized the opportunity to double-down on their ridiculous Covid-19 conspiracies. 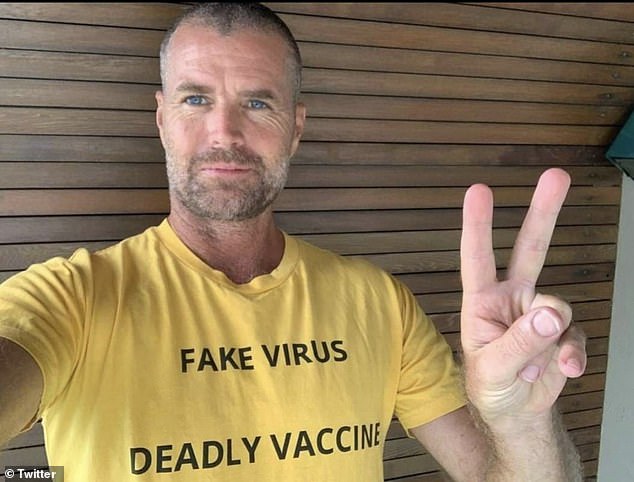 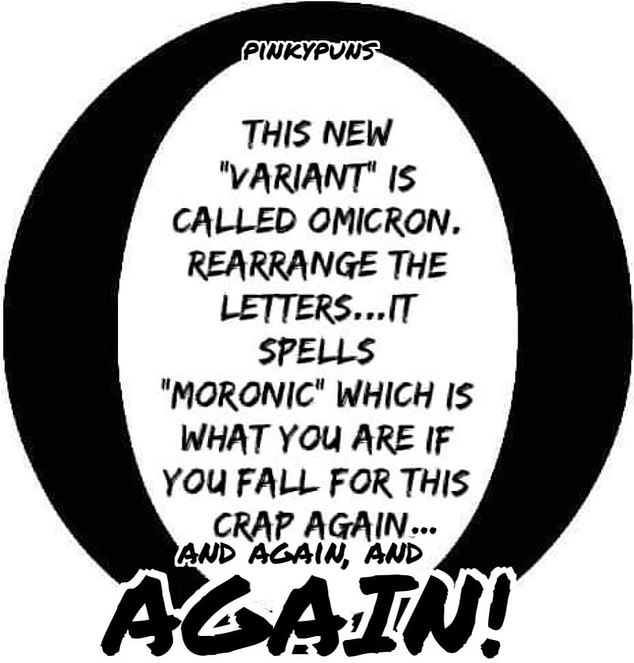 One bizarre theory falsely argues that Omicrom is a hoax because it’s an anagram of ‘oncomir’, which are molecules associated with cancer.

Evans, who spouted so much false Covid information last year that he was banned from Facebook and Instagram, used Telegram to repost the crazy theory on Sunday, which came from alt-right groups in the US.

The post which includes a screenshot of the definition of ‘oncomir’ from Wikipedia has been viewed more than 10,000 times.

Irate Covid-deniers spent the weekend reposting similar screenshots with their own furious commentary.

‘This new fake Omicron variant is also an anagram of oncomir! It’s cancer! Hidden in plain sight,’ one woman yelled at her Facebook followers.

‘Start doing your research!’ another woman implored, as though the anagram was proof of her unscientific beliefs.

Another nonsense theory claims experts decided to call the new strain Omicron because, if the letters are jumbled around, it spells ‘moronic’. 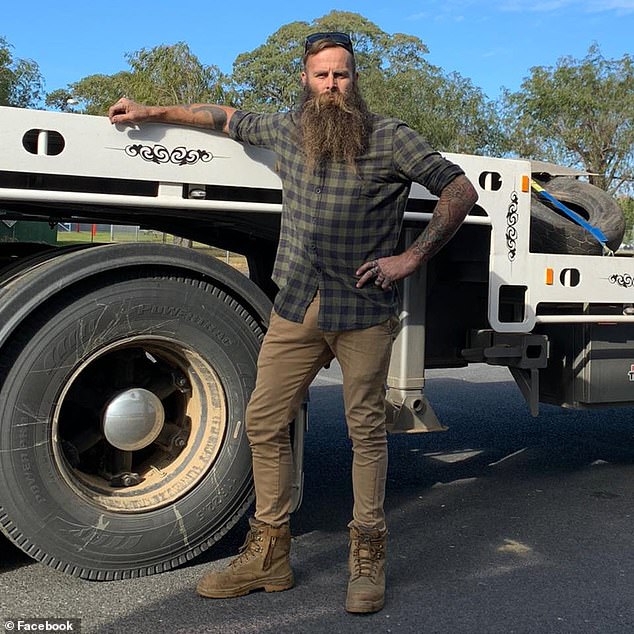 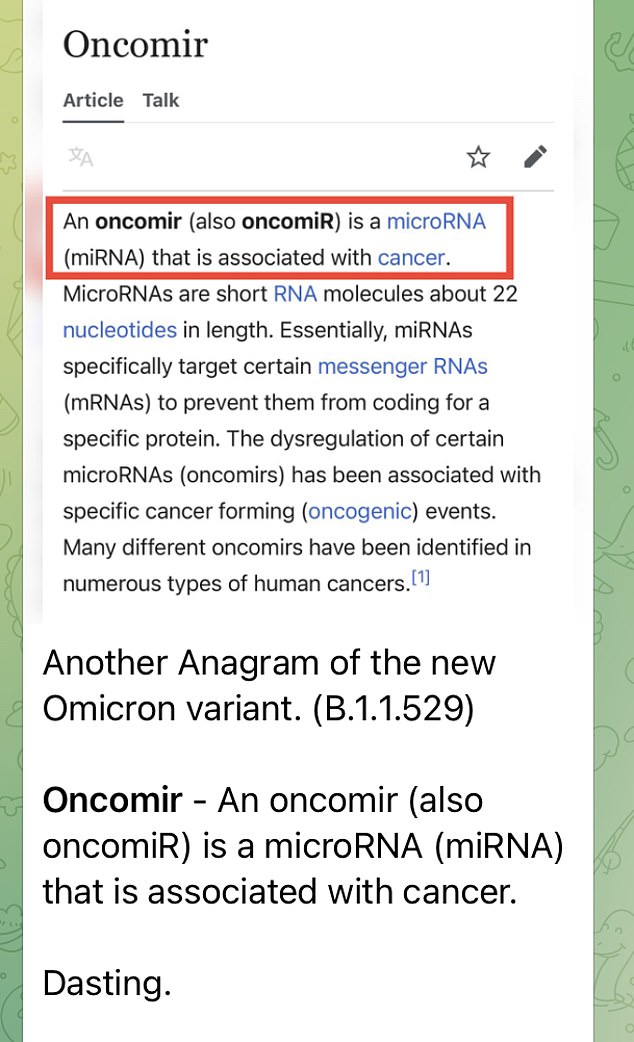 One post includes a screenshot of the definition of ‘oncomir’ from Wikipedia has been viewed more than 10,000 times (pictured)

‘They are laughing themselves silly – behind closed doors, over the reality that the dumbed-down masses are set to believe wholeheartedly that this new bogus variant really exists,’ a conspiracy theorist wrote on Telegram.

‘Naming this “scariant” as an anagram of morornic is bound to wake up a s***load of people,’ someone else confidently said.

Others have rejected the word ‘omicron’ altogether and started referring to the mutation as the ‘moronic’ strain.

Covid-denier Adam Thurrowgood, who made headlines last year when he breezed through through a checkpoint on the NSW-Queensand border without signing a coronavirus declaration, also appears to support the wild theory.

The tattooed truckie shared a Facebook post which read: ‘So way back in September I predicted we would have a new variant and state of emergency early December… Hmmm Please welcome… “moronic”. This government is playing us for fools.’

A far-fetched theory was posted by Jacquie Dundee Muller, who once refused to wear a mask outside a Melbourne Kmart claiming the face covering were ‘against her religion’.

Ms Muller made a speech at Melbourne’s anti-lockdown event over the weekend, and on Sunday re-posted a meme originally uploaded on Instagram by conspiracy group Rise Melbourne.

The post features a screenshot from the World Health Organisation website which explains that Covid was first announced to the world on January 30, 2020, and Omicron was auspiciously announced on November 26, 2021 – 666 days later.

In modern culture, the number 666 is often recognised as a symbol for the devil. 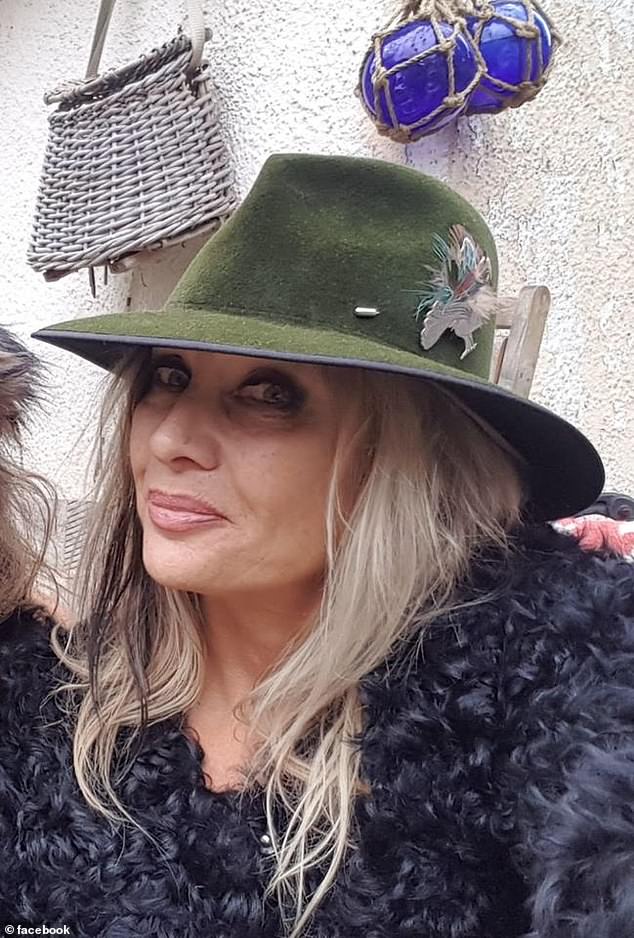 ‘666 days after WHO announced on Jan 30th the Novel coronavirus was a concern, it announces omicron – a [SIC] wax-resistant variant of concern.’

Scientists are looking into the efficacy of vaccines on the new strain, but Prime Minister Scott Morrison said on Monday there was no evidence current vaccines were not effective.

Ms Muller also once claimed mobile network 5G was ‘a weapon that sucks the oxygen out of the air around you and the radiation presents in the form of flu-like symptoms’.

Another notorious Covid-denier, Bernadette Cassar, wrongly accused government authorities of using the virus as a fear-mongering tool ‘to keep you all trapped’ over the weekend.

‘For starters the name says it all,’ she said, potentially referring to the anagram theories.

‘How about you start doing some independent research yourself. All the information is out there for you to draw your own independent conclusions. 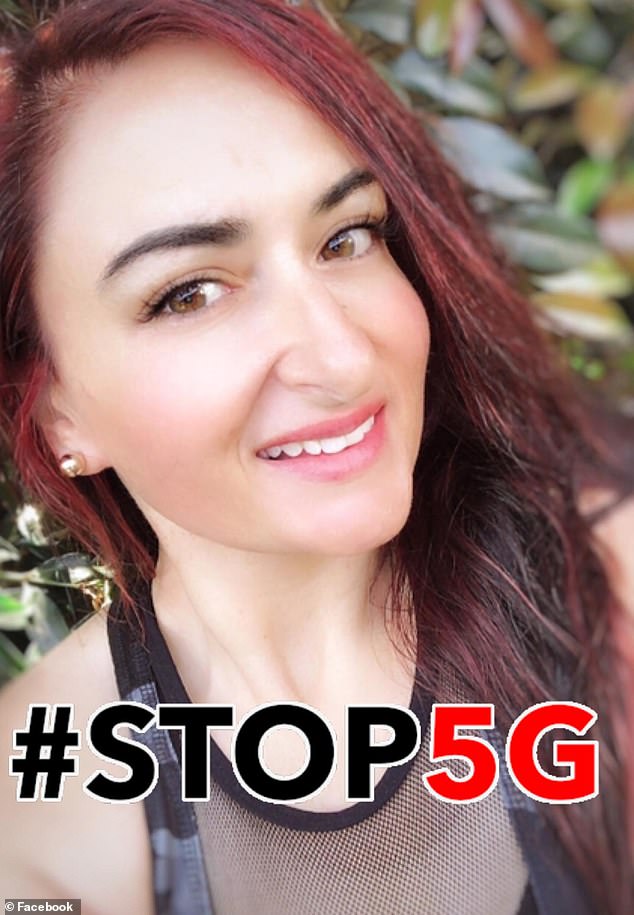 Ms Cassar, who also frequents anti-lockdown protests in Melbourne and posts about her aversion to mandatory vaccine passports, wrote on Friday: Turn off that TV and you won’t know about that deadly new strain that’s going to hit our shores soon.’

The Omicron variant was identified in South Africa on November 11 and has since spread to many countries around the world.

Amid fears it could make vaccines less effective, Australia shut its borders to nine nations in southern Africa on Saturday but at least two cases have been identified in Sydney with a possible third being investigated.

Boosters are currently handed out six months after the second dose but the gap could be shortened to maximise protection against the new mutant strain which is believed to be at least as contagious as the Delta strain. 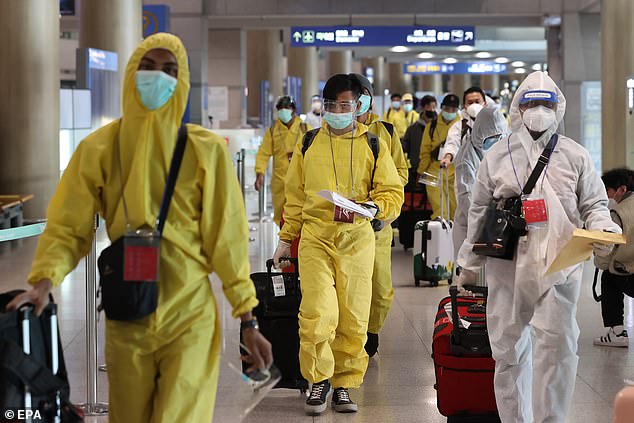 Prime Minister Scott Morrison has insisted there is no reason for panic yet over the new strain. Pictured: Passengers wearing protective gear in Korea after Omicron was announced

Speaking to reporters on Monday morning, the Health Minister said: ‘I have asked ATAGI to review the booster time frames in light of international evidence more generally with regards to immunity and also in light of the Omicron variant.

‘And we will, as ever, allow them to act independently and continue to follow their advice. But we’re prepared with supplies.’

Mr Hunt was asked if the timeframe would be reduced to four months after the second dose but said: ‘I wouldn’t speculate on any timeframes.’

The Prime Minister has insisted there is no reason for panic yet over the new strain, saying there was no evidence the current vaccines were not effective against Omicron as he prepared for an emergency meeting of national cabinet expected on Tuesday.

‘Of course it is concerning, and that is why we’re getting all the information we possibly can,’ Mr Morrison said. 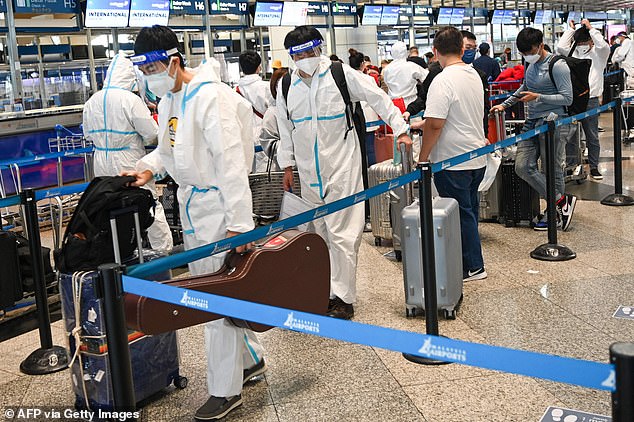 Anyone arriving  in Austrlaia from South Africa, Lesotho, Botswana, Zimbabwe, Mozambique, Namibia, Eswatini and Malawi now needs to isolate at a health facility for 14 days. Pictured; Passengers in PPE gear after Omicron was announced

‘We are not in the situation we were in back in the first half of 2020. We have 86.7 per cent of the population vaccinated.

‘We have already had 13 other strains which have presented. This isn’t the first of the new strains we have seen, and the evidence to date does not suggest it is a more severe form of the virus.

‘On issues of transmissibility and impact on vaccine, there is no evidence yet to suggest there are issues there.’

Anyone arriving from South Africa, Lesotho, Botswana, Zimbabwe, Mozambique, Namibia, Eswatini and Malawi now needs to isolate at a health facility for 14 days under the new emergency measures.