North Korea has accused the US of risking starting a war after they held their first combined naval exercise with South Korea in five years.

The joint drills, which took place near to the peninsula today, came a day after nuclear-armed Pyongyang conducted another ballistic missile launch.

The four-day exercise on South Korea’s east coast will involve more than 20 vessels and an assortment of aircraft, which will conduct drills for anti-ship and anti-submarine warfare operations, tactical manoeuvres and other maritime operations, the navy said.

‘Obviously, this is an extremely dangerous act of igniting the fuse to drive the situation on the Korean peninsula to the brink of war,’ he told the General Assembly.

The North, who have held a record-breaking blitz of weapons tests this year, revised its nuclear weapons law, enshrining a ‘first strike’ doctrine and vowing never to give up its nukes.

After years of failed diplomacy with North Korea under his predecessor, South Korea’s President Yoon Suk-yeol has vowed to beef up joint military drills with the United States.

‘This exercise was prepared to demonstrate the strong will of the South Korea-US alliance to respond to North Korean provocations,’ the South’s navy said in a statement. 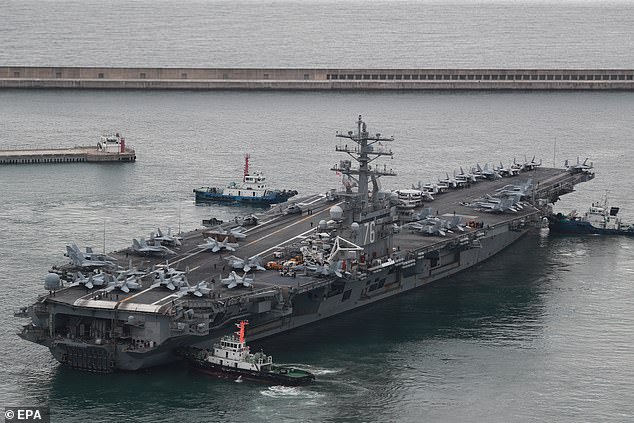 South Korea and the United States began their first combined naval exercise near the peninsula in five years on Monday, leading to a warning by North Korea that the allies risked triggering war (Pictured: USS Ronald Reagan) 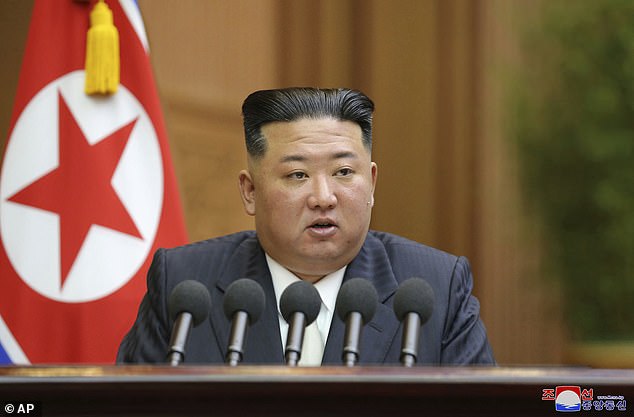 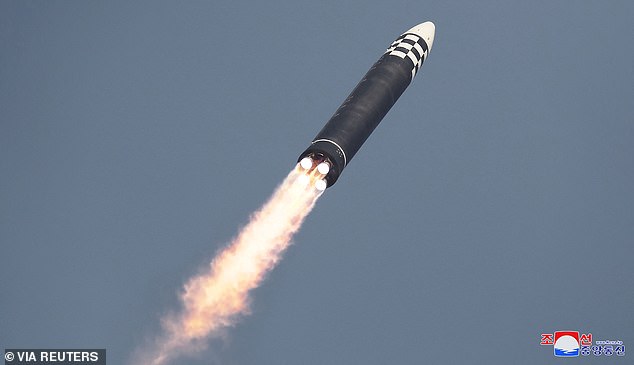 Kim told the United Nations that the United States ‘compelled’ action by the North, officially known as the Democratic People’s Republic of Korea.

‘The US should clearly understand that its heinous, hostile policy against the DPRK over the past 30 years has brought about today’s reality and ask itself and ponder how far it will prolong this situation.’

Washington is Seoul’s key security ally and stations about 28,500 troops in South Korea to protect it from the North.

‘Through this exercise, we will further improve the ability to conduct joint operations between the naval forces of the two countries,’ Kwak Kwang-sub, a senior South Korean naval officer, said in the statement.

North Korea is under multiple sets of international sanctions over its programmes to develop nuclear weapons and ballistic missiles.

South Korea’s hawkish President Yoon Suk-yeol, who took office in May, has vowed to beef up joint military exercises with the United States

Close neighbour China said it had ‘noted’ the joint military drills in the region when asked about the missile launch on Monday, and called for ‘dialogue and consultation’.

‘The main issue is that the North Korean side’s legitimate and reasonable concerns have not received due response,’ foreign ministry spokesman Wang Wenbin said at a routine briefing.

‘The US should shoulder its own responsibilities, stop confrontation and pressure, and create conditions for the resumption of meaningful dialogue.’

Seoul has also detected signs the North is preparing to fire a submarine-launched ballistic missile, the president’s office said Saturday, a weapon Pyongyang last tested in May.

Washington and Seoul have long carried out joint exercises, which they insist are purely defensive. North Korea, however, sees them as rehearsals for an invasion.

Last month, the United States and South Korea staged their biggest combined military drills since 2018 — the resumption of large-scale training sessions that had been scaled back due to Covid-19 and the period of diplomacy with Pyongyang.