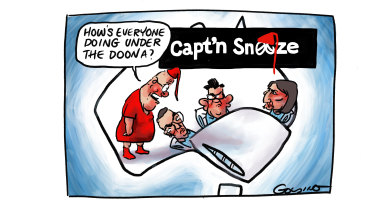 To submit a letter to The Age, email [email protected] Please include your home address and telephone number.

Nuclear is not feasible

Your correspondent unfortunately ignores the time scale of any nuclear installation in eastern Australia (“Making the nuclear case”, Letters, The Sunday Age, 18/7).

Their massive water usage for cooling means a coastal installation (remember Japan’s Fukushima plant?). Where? It would take at least 15 years to get public approval of any site, by which time we will have burnt.

Nuclear can’t compete on price with even coal or gas, both of which are already becoming uncompetitive with renewables. To even consider it just gives our incompetent federal “denialista” more arguments for delaying critical action now.
Rod Cripps, Parkdale

The call for a ring of steel is what I would expect from Michael O’Brien or Scott Morrison as they try to heap scorn on people working to solve problems.

Make sure Victoria helps NSW in all ways possible within the constraint of protecting Victorians and others within its borders.
Adrian Tabor, Point Lonsdale

A new title is in order
A number of your correspondents (Letters, 23/7) express dismay at the attitude of federal Environment Minister Sussan Ley regarding coal mining and its consequences for future generations.

The problem may be that she is the Minister for the Environment, which has come to mean, in her political circles, the Minister for Trees and Furry Animals – that is, for optional stuff that is nice to have in moderation but the protection of which costs money and will not win many votes.

Perhaps it would help if she was renamed the Minister for Saving the Support Systems of Life on Earth as We Know It – Including our own.
Colin Smith, Glen Waverley

A courageous man
Thank you, Barney Zwartz, for reminding us of the achievements and courage of William Tyndale (Faith, The Sunday Age, 18/7). I received a copy of his New Testament in 2020.

I enjoy reading a passage from it every morning. It is remarkably similar to the authorised version, which I grew up with as a child in Scotland, and in essential meaning not very divergent from modern translations.
Christine Bradbeer, Mont Albert North

It’s the wrong question
Barnaby Joyce is asking the wrong question. He should be asking what it’s costing now, and will cost in future, if we don’t take action to meaningfully reduce emissions and keep global warming to 1.5 degrees or less.
Eve Stocker, Carlton North

A welcome proposal
The proposal for a new cemetery laid out as parkland in Melbourne’s western fringe is welcome and common practice worldwide (“A place of rest for the living, too”, The Sunday Age, 18/7).

It was the concept behind the heritage-listed Melbourne General Cemetery, in whose design and planting government botanist Ferdinand von Mueller was involved in the 1850s.

Today, it is obvious to any visitor to our nationally significant cemetery that it has been allowed to decay, both in its physical structures, including the cast-iron boundary fence, and its former landscape.

So what was the point of an original visionary plan and a detailed heritage listing as being of state significance if the budget and skill are not available to implement the conservation plan? Even finding a particular grave is mission impossible.

It’s time our historic cemetery was declared full, ad hoc burials in remaining verges cease, and the dysfunctional division of responsibility between the ministers of health and planning be resolved.

If the City of Brisbane can manage 12 cemeteries, perhaps the City of Melbourne, already managing superb adjacent parkland, could manage one?
Angela Munro, Carlton North

Reaping what they sow
Has anyone suggested to NSW Health Minister Brad Hazzard that the rest of the country doesn’t believe NSW is dealing with its outbreak firmly enough?

Were it, people might see the merit in vaccine donations.

NSW shouldn’t listen to the Prime Minister, the Treasurer and others with tired comparisons to Victoria’s previous performance and look at how this latest outbreak is being managed contemporaneously by all states other than NSW.
Trevor Martin, St Leonards

This data would help
When reporting the number of infections, hospitalisations and numbers of people on ventilators, it would also be useful to know how many of each category were fully or partially vaccinated.

If the trend is similar to overseas, it would provide constant reinforcement for the benefits of vaccination, which may help to overcome vaccination hesitancy.
Dianne Lewis, Mount Martha

A political response
In denying that Sydney needs to be surrounded by a ring of steel, Scott Morrison said the people of Greater Sydney don’t feel they are under loose restrictions.

That is a purely political response. A true leader in this emergency would determine the best way to handle the emergency and convince the population of the need, while accepting a certain degree of political backlash.