Winning hand! Nursery worker shows off his mind-bending trick shots as he throws cards through tiny gaps and lands them on spinning targets

This is the moment a nursery school worker performs incredible trick shots by throwing playing cards through impossibly small spaces and landing them in clothes pegs.

Since then, his videos have earned him 1.6 million TikTok followers, as well as 117,000 on Instagram, and 30 million likes. 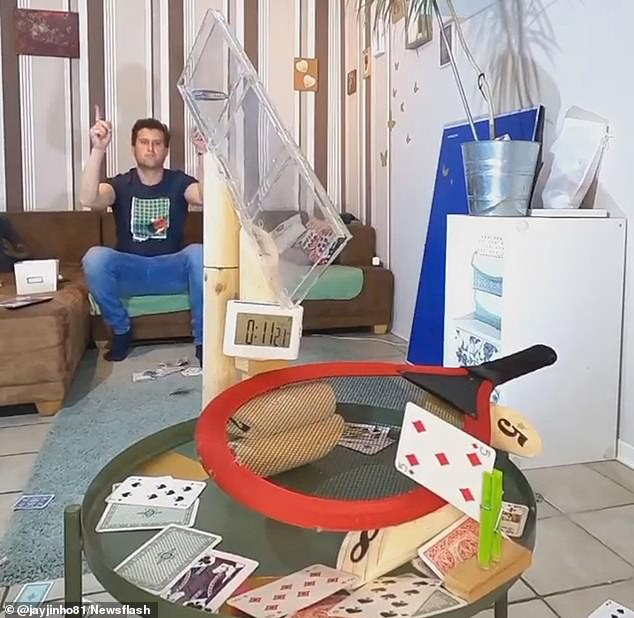 The videos show some of the challenges that Michael has completed and posted on social networks.

One collection of Michael’s top 10 trick shots shows him throwing playing cards or other objects and managing to land them into impossibly small spaces as a stopwatch shows the time he takes to complete the challenges.

Another video shows Michael landing a card in a clothespin after tossing it through a slit that appears to be no larger than a CD case.

A third video shows the German influencer beating his friend at a ‘trick shot’ version of noughts and crosses while a final video shows him landing a ping pong ball through an obstacle course and onto a glue stick.

Michael said he started setting challenges with footballs, ping pong balls and toilet paper, but once he started to land playing cards in clothespins, it really took off from there, adding different levels of difficulty. 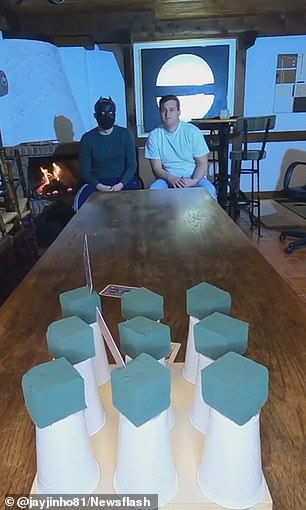 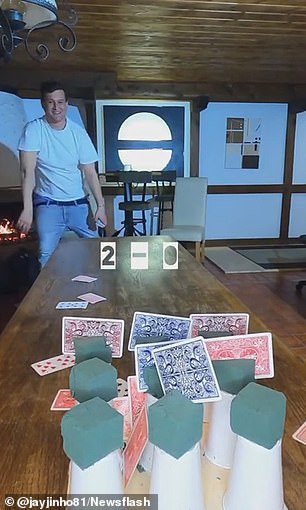 His posts quickly started amassing huge numbers of views after being shared by netizens and news portals, helping to make some of his videos go viral.

He added that some of the videos that were shared or reposted have gained over 20 million views, which he says is a little funny as it was not his goal when he first started posting trick shots.

Michael said: ‘It is really fun for me to think of new ideas that people have never seen before. That’s my motivation.’

When asked about his handle ‘Jayjinho81’, the influencer said it was inspired by former Nigerian footballer Jay-Jay Okocha who played for German clubs Borussia Neunkirchen and Eintracht Frankfurt.

Michael, who left his office job 20 years ago to work with children at a kindergarten, said that for now, his plans are to stay in Germany where he lives with his wife and six-year-old daughter.