“This year, May 9 has special meaning,” opened a video released on the eve of World War II Victory Day, a day that was always celebrated with enormous fanfare but also solemnity in the Soviet Union and still is to varying degrees in its former states, including Belarus.

“We are going to mark the defeat of Facism in a country where in the 21st century Fascism has not only raised its head, but is thriving. A country occupied by a real junta run by a dictator who openly admires Hitler,” says Pavel Latushka, Head National Anti-Crisis Management of Belarus staring down the camera, holding red and white roses. Red and white are the colors that have come to symbolize the opposition’s cry for change in the country run for 27 years by one president, Alexander Lukashenko.

“A country,” Latushka goes on, “that with each day resembles more closely a huge concentration camp, not a European country.”

Early in his rule as he was acting to establish his own strongman image, Lukashenko, in a conversation with a German newspaper reporter, controversially gave certain credit to Adolf Hitler for creating a strong state.

Nine months after the country erupted into street protests, Belarus’ opposition movement has fallen from the front pages, which worries the untold numbers who want to see Lukashenko go. The demonstrations that at times drew hundreds of thousands of peaceful protestors have stopped. The crackdowns were too harsh and the penalties too stiff. At least 35,000 people have been arrested over the course of the last nine months and many have been beaten and tortured. At least nine have died, according to National Anti-Crisis Management. The protests do continue more quietly — partisan-style — but still even the most subtle gesture can end in arrest.

“They are so absurd that one can barely believe this could be true,” Vladzimir Astapenka, also of the National Anti-Crisis Management group told Fox News. “Like when in Belarus a girl was arrested for wearing red and white socks.” 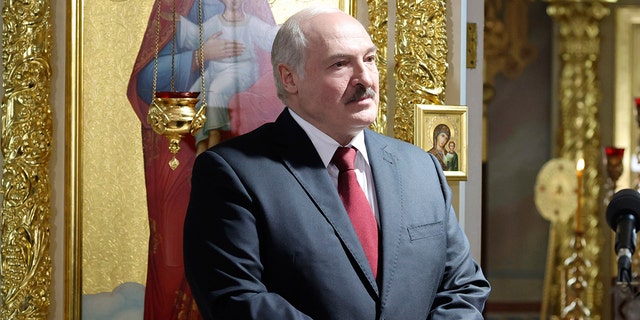 It was considered “an unauthorized single picket,” Astapenka said. And a man with the box a television set came in, a box that happened to be red and white, got someone else summoned to the authorities as it was visible from the street. He claimed it had been left behind by previous tenants of his apartment and he hadn’t had the chance to dispose of it.

Astapenka is a former Belarussian diplomat who resigned in protest over the treatment of those who came out to dispute the results of the Aug. 9 election which returned Lukashenko to power for a sixth term. The United States, among other countries, has called the election illegitimate.

Astapenka explained further how the screws are tightening.

He said the definition of extremism has been expanded to include anyone who insults or discredits public authorities. Fines for certain violations associated with any form of resistance have been multiplied — often surpassing $2,000, nearly five times the average monthly salary. Spreading misinformation about the situation in Belarus and covering live events that are not sanctioned are now punishable too. Previously, live coverage of events the regime didn’t smile upon was tacitly illegal and recently landed two young female journalists in jail for two years for streaming some protest events.  Now, apparently, it’s codified.

As the security services have carte blanche to crack down on anyone they deem insurrectionist, some of those who have suffered at their hands are turning to Germany to call for justice. A consortium of German lawyers are representing a group of torture victims from Belarus claiming crimes against humanity.  Lukashenko quipped that Germany wasn’t in a position to judge.

“The immediate reaction of the illegitimate president,” Astapenka said, “was that he was really surprised that Germans–as he said–‘heirs of Nazis’ are going to judge him. His question was–‘who are you to judge me after all?'”

Lukashenko who has been pressed by the opposition to step down, is not expected to take those suggestions to heart, though he did say this week that if the US, given its own heated debates about election results, called another vote of its own, he would too. They would just have to be the very same day.

It was a hard-fought victory, and the movement for change sees symbolism in May 9. The few public events were scheduled tomorrow as an opportunity for people to come out and show their patriotism.

“We are appealing to the people to go out to the streets and centers of the cities, laying flowers at monuments dedicated to this victory and to the heroes of the Second World War. And we realize that we are doing this for the moment under an occupation regime which has launched a war against its own population,” Astapenka said.

“We feel like victors,” Pavel Latushka said at the conclusion of the Anti-Crisis Management video. “We will meet at legally sanctioned events. We will recognize one another by glances and smiles. This Victory day must be and will be our Victory Day.”