COVID-19 claimed some of my favourite haunts. As far as losses go, these are totally the sort I can keep in perspective. But loss there is. None more acute than for my old local, which provided a kids’ menu, an adult aesthetic and spiritual nourishment so fulfilling that when I pass the boarded-up premises on the neighbourhood high street I’m forced to avert my eyes.

Such casualties are widespread in battle-hardened Melbourne where prominent shopping strips testify to the wreckage of last year’s protracted lockdown, the end of relief schemes and long-term trends that have been squeezing profit margins. 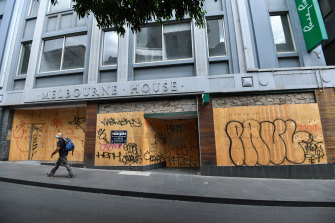 An empty shop in Melbourne.Credit:Joe Armao

I think the scars also expose the socio-economic segregation that’s turned pockets of Melbourne into ephemeral places where consumerism has replaced community.

These days Chapel Street’s snooty South Yarra end has diminished power to intimidate, its empty shopfronts like so many missing teeth. The fallen include a homeware store, tattoo studio, nail bar, hair accessories shop, general accessories shop, several clothing stores and a T2. While I won’t mourn most of these places, I sympathise with the traders out of business, the landlords out of rent and the survivors fearing a death spiral.

“Oh God, is this going to be yet more negative press about Chapel Street?” asked the lovely bloke at a menswear boutique who yesterday assured me business was flourishing.

The average vacancy rate in 11 of the city’s prime strips, Chapel Street being one, has doubled post-COVID to 14 per cent, according to reported findings from consultant Richard Jenkins. According to council figures, it’s much the same story in Fitzroy’s wealthy hipster precincts of Gertrude Street and Brunswick Street, and in the deflated CBD with its ghost towers. 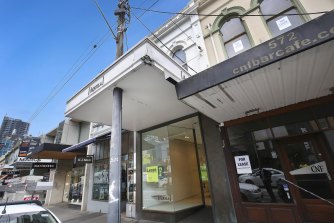 It will surprise no one that the more resilient strips identified in Jenkins’ study, such as Puckle Street, Moonee Ponds and Church Street, Brighton, are mixed spaces, catering for locals, where you can still get a haircut and visit the post office or dentist. And once there you might be lured into a bricks-and-mortar shop rather than order goods online.

By contrast, for at least two decades the Acland Street strip – which the Jenkins study found had 20 per cent shopfronts vacant in February – has been little more than a tourist playground. As a child I experienced a whiff of its heyday as a hub for post-war Eastern European migrants, among others, who dined at Scheherazade – or, when feeling adventurous, at Fairy Stork and the sprinkling of other Chinese restaurants – shopped at Berger’s Delicatessen and talked about revolutions past outside Yiddish-language bookshop, Balberyszski. (For more nostalgia read historian Judith Buckrich’s Acland Street: The Grand Lady of St Kilda.)

And there is a Readings, where I’ve whiled away many afternoons. Is there a more telling signifier of intense gentrification than a Readings? I mean, apart from a soaring Greens vote? The point being: once shops such as Readings appear you know the neighbourhood’s on a trajectory to a place beyond hipsterdom where the smashed avocado cafes start yielding to fast food outlets and fashion chains because almost no one else can cop the rents. 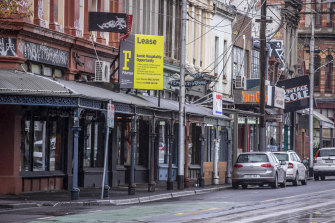 This is basically where Acland Street ended up, more or less. And where Brunswick Street was gradually heading as it sucked in ever greater numbers of knowledge workers, students and people willing to spend serious money on organic vegetables.

People like me, for instance. OK, maybe I’m not willing to spend serious money on organic vegetables. I am, however, part of a demographic that craved the colour and grit of inner-city type neighbourhoods only to drive out lower income people and gradually snuff out the colour and grit I had craved. It is something like the Byron Bay effect in an urban setting.

Elsewhere in Melbourne, this century’s Asian migrant surge has pumped life into white-bread middle-ring suburbs such as Camberwell, and turbo-charged growth in the CBD.

But COVID, as we know, has forced a reckoning on so many policy fronts from the demise of local manufacturing to the rise of casual, insecure work that helped seed Victoria’s second-wave. And with the borders shut our reliance on international students to fuel growth is apparent in streets that feel strangely empty, and a recovery likely to have a long tail. 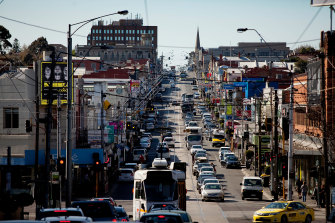 I don’t want to overstate a sense of gloom; new businesses are sprouting in unloved corners of my local shopping centre, and this makes me praise the gods of capitalism and humanity’s boundless optimism. Crazy, though, to think that a little more than a year ago people were hyperventilating about crowded Swanston Street trams. Careful what you wish for, folks.

Now, experts the world over are “reimagining” the post-COVID city, as migration stalls and remote work becomes entrenched.

In Melbourne, do we use the CBD’s empty office and student accommodation to lure “back” the artists, jewellers and designers who got priced out long ago? Leanne Hodyl, who conducted a built form review of the CBD for the Victorian government, thinks we should. It seems a worthy idea, which would presumably require landlords to drop rents and for government to provide some assistance. Student apartments could be re-purposed for affordable or crisis housing, says Hodyl and other urban dreamers.

It would be naive to think such an idea could be easily executed or invulnerable to myriad unforeseeable risks, but we have a once in a century opportunity to take a breather and figure out how to make Melbourne work for everyone. So let’s have a go, please.

Julie Szego is a regular columnist.