Washington: Transportation Secretary Pete Buttigieg has announced that he and husband Chasten have become parents.

Buttigieg, the first openly gay Cabinet secretary confirmed by the Senate, posted the news on Tuesday (Wednesday AEST) on his personal Twitter account. 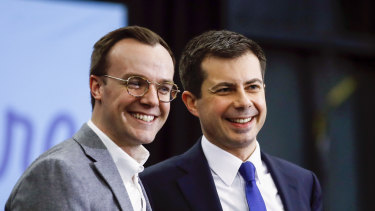 Then-mayor and US presidential candidate Pete Buttigieg, right, and his husband Chasten Buttigieg in 2020. Credit:AP

“For some time, Chasten and I have wanted to grow our family,” he said. “We’re overjoyed to share that we’ve become parents! The process isn’t done yet and we’re thankful for the love, support, and respect for our privacy that has been offered to us.

Buttigieg, 39, has talked publicly about his desire to become a father since his campaign for the Democratic presidential nomination in 2020.

Earlier this year, he told The Associated Press “we’re still working at that,” before adding with a smile, “Stay tuned”.

Buttigieg and Chasten, 32, got married in June 2018, and Buttigieg’s own father died six months later.