‘He looks like he’s 13’: Hear the panicked 911 audio from Raleigh shooting as baby-faced gunman is identified after he killed his brother, 16, three women, an off-duty cop AND a neighbor’s dog

Panicked witnesses to the mass shooting in Raleigh yesterday pleaded with police to hurry to the scene where a 15-year-old boy slaughtered five people on a quiet street, begging: ‘Hurry… he’s dressed all in camo. He looks like he’s 13’.

He fled the scene of the rampage to a nearby barn, where he barricaded himself inside for several hours.

Before he was taken into custody, he suffered a ‘life threatening injury’ but police will not reveal if he shot himself, or whether he engaged in a gunfight with them.

Austin remains in the hospital in critical condition. His motive for the killing has not yet been revealed but the Raleigh District Attorney’s Office has vowed to charge him as an adult, if he survives.

The 911 call was made by a friend of Torres. ‘He’s one of yours! He’s an officer!’ he pleaded with the dispatcher.

He told them Thompson had been driving a ‘white car’, that he was carrying a ‘shotgun’.

Austin also shot two others – Marcille Gardner and officer Casey Clark. They both survived, but Gardner is in the hospital in critical condition. 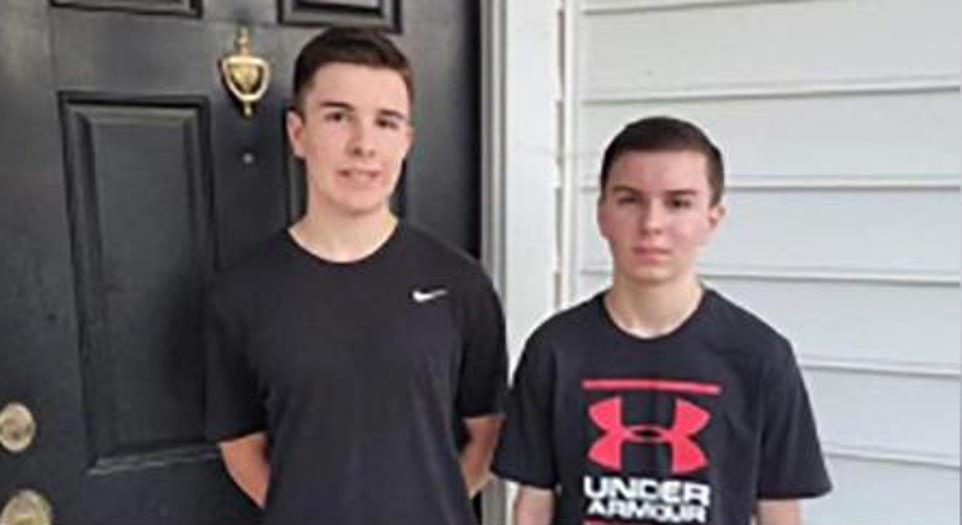 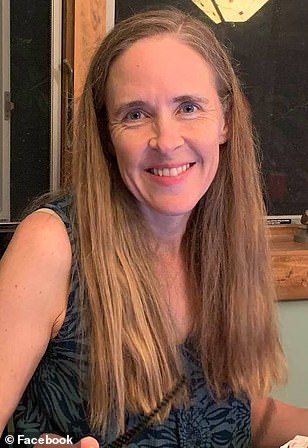 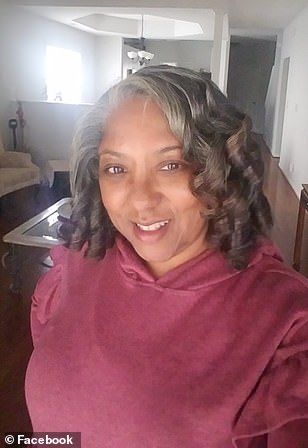 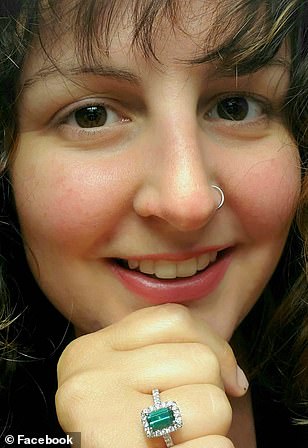 Susan Karnatz, 49, was one of the five people killed by a teenage gunman in Raleigh, North Carolina, yesterday along with  Nicole Connors, 52 (center) and Mary Marshall, 35, (right) 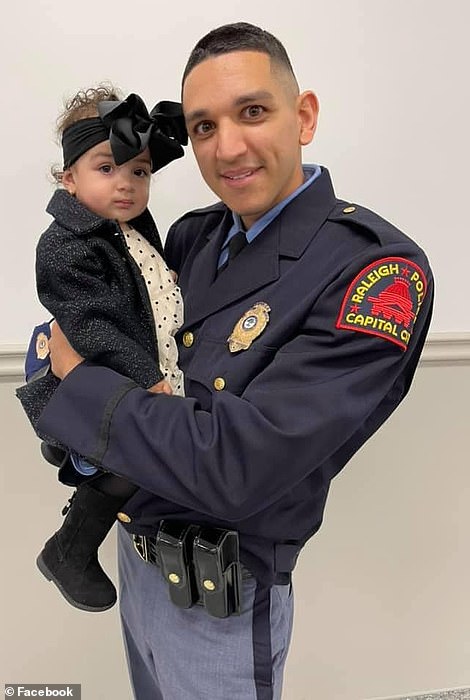 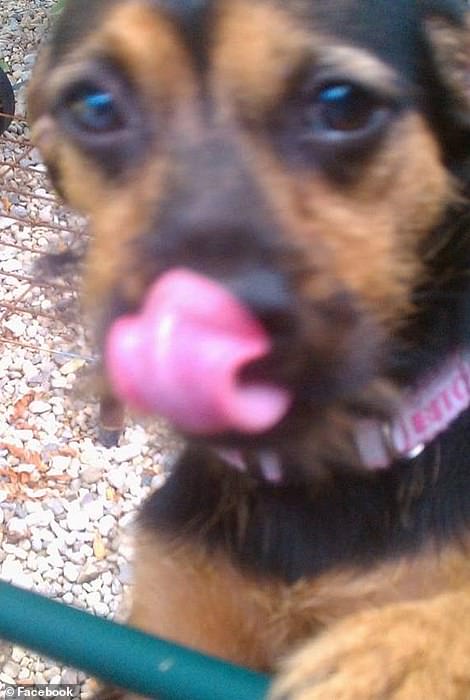 Off-duty cop Gabriel Torres was also shot and killed. He was on his way to work at the time. The gunman also shot his neighbor’s dog, Sami 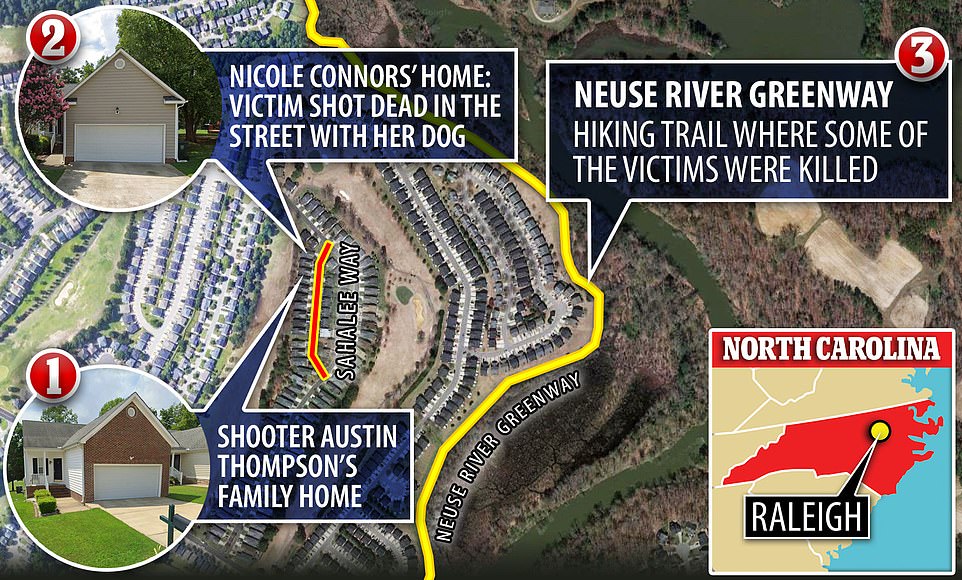 The gunman first started shooting on Sahalee Way, then made his way down to the Neuse River Greenway where he shot some of the victims. He fled to a barn, and was taken into custody from there

His family have not yet spoken out. His killing spree prompted President Biden to renew his calls for a ban on assault weapons.

‘Enough. We’ve grieved and prayed with too many families who have had to bear the terrible burden of these mass shootings.

‘We must pass an assault weapons ban. The American people support this commonsense action to get weapons of war off our streets,’ he said.

Marshall’s partner Robert Steele wrote in a heartbreaking post: ‘The love of my life was killed last night by a cowardly individual. She was shot while walking our dog. 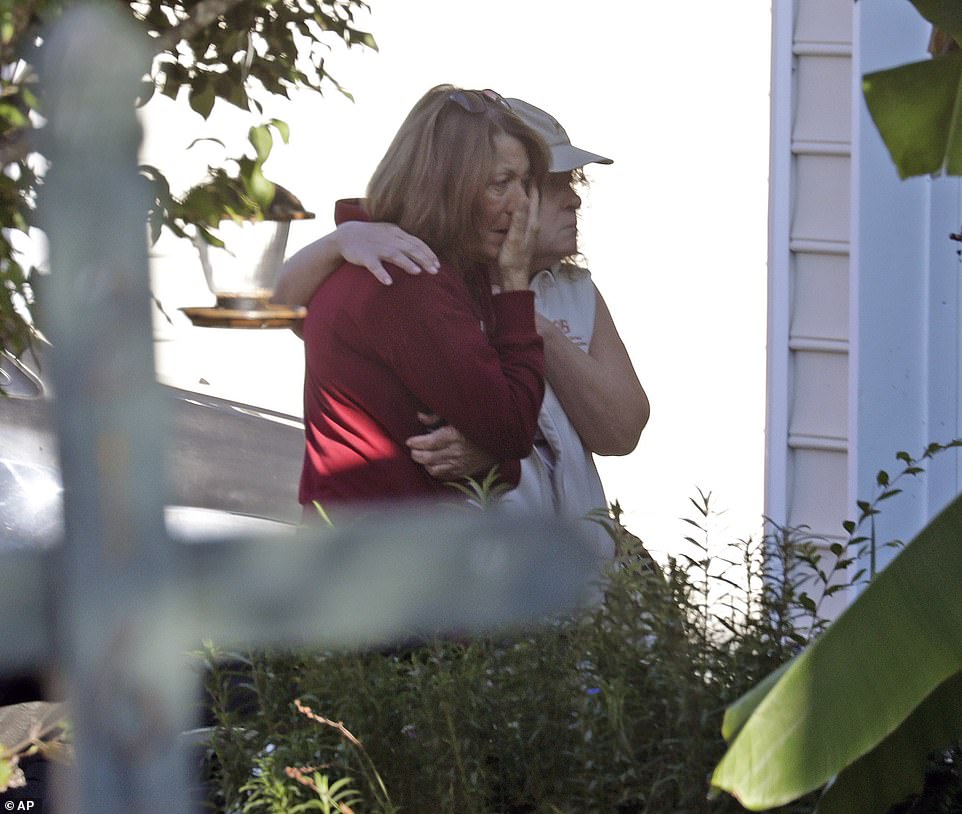 Neighbors embrace as police remain on the scene at Castle Pines Dr. and Sahalee Way following a shooting Thursday night in Raleigh, N.C., on Friday, Oct. 14, 2022 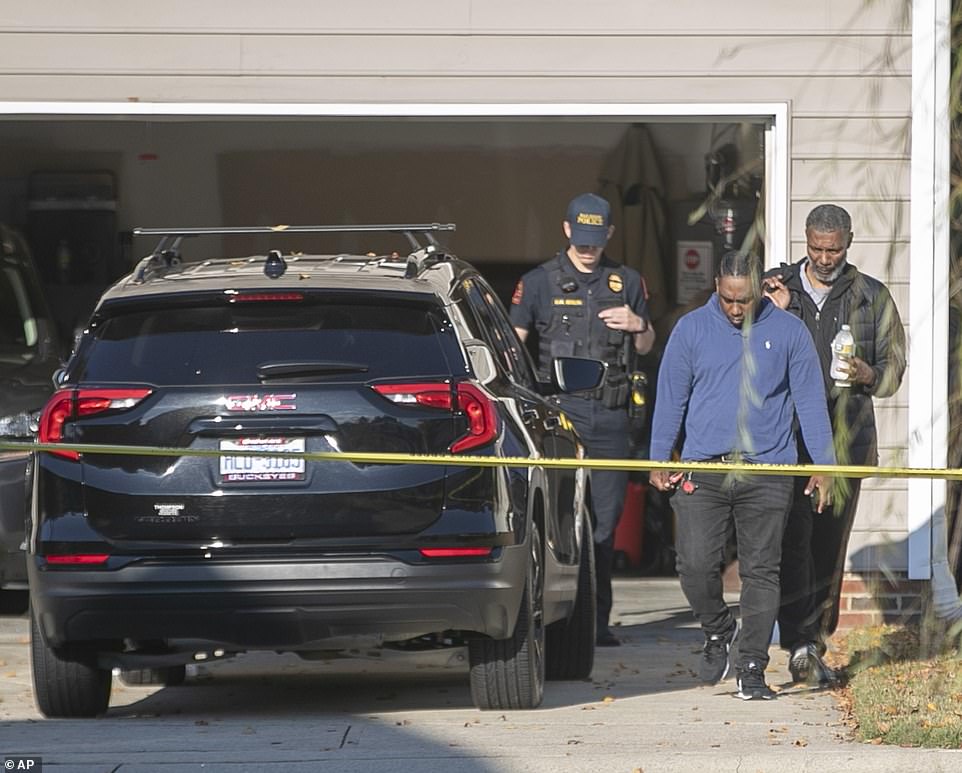 Nicole Connors’ partner, Tracey, is shown being escorted out of their home on Salahee Way on Friday. The entire street is being treated as a crime scene 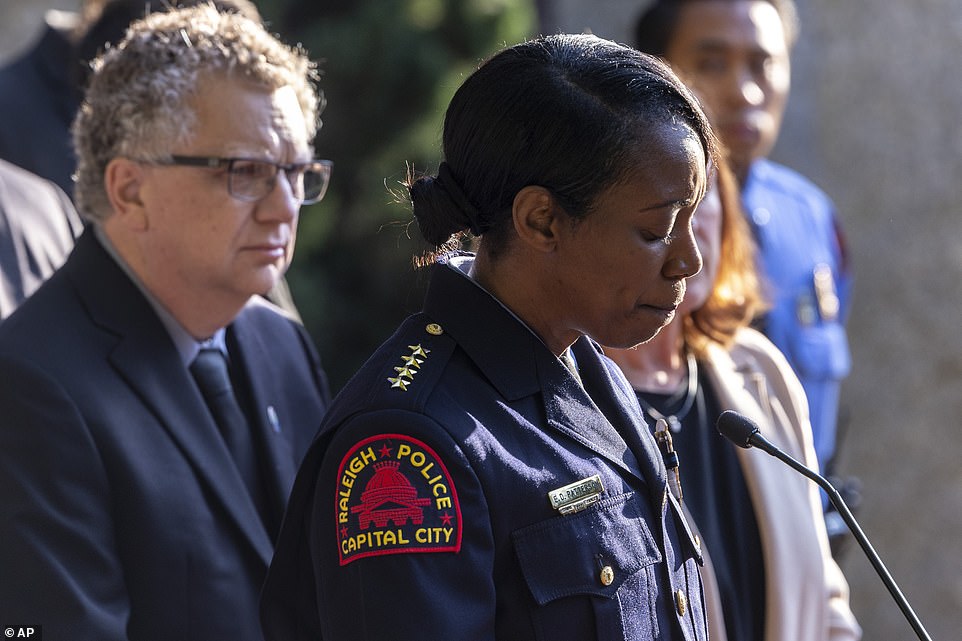 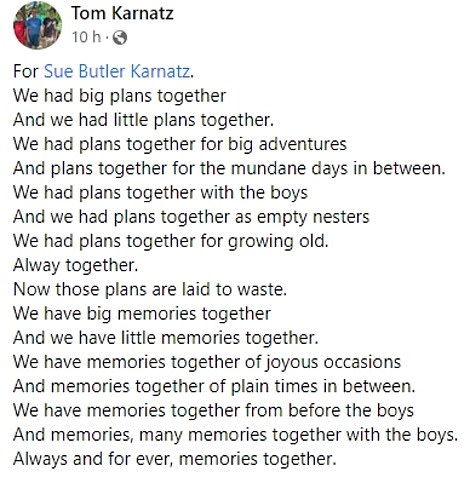 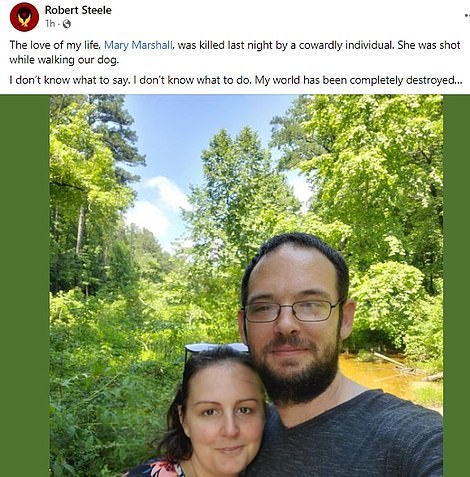 The grieving husbands of two of the women took to social media on Friday after they were killed. The gunman’s motive remains unconfirmed

His motive remains unknown, and it is also not yet clear if he knew his victims.

Eye witnesses told WRAL that they saw the gunman dressed in camouflage clothing with a backpack and black boots, crouching down, and said he was ‘aged between 13 and 16’.

‘He looked like a baby. I just don’t even have the words to explain. This is not OK.’ 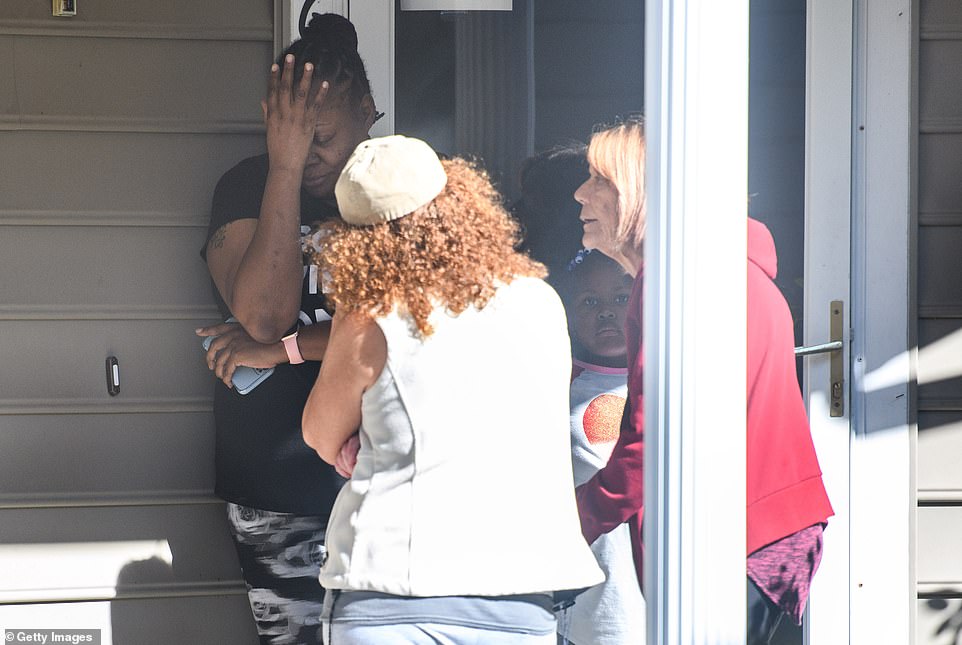 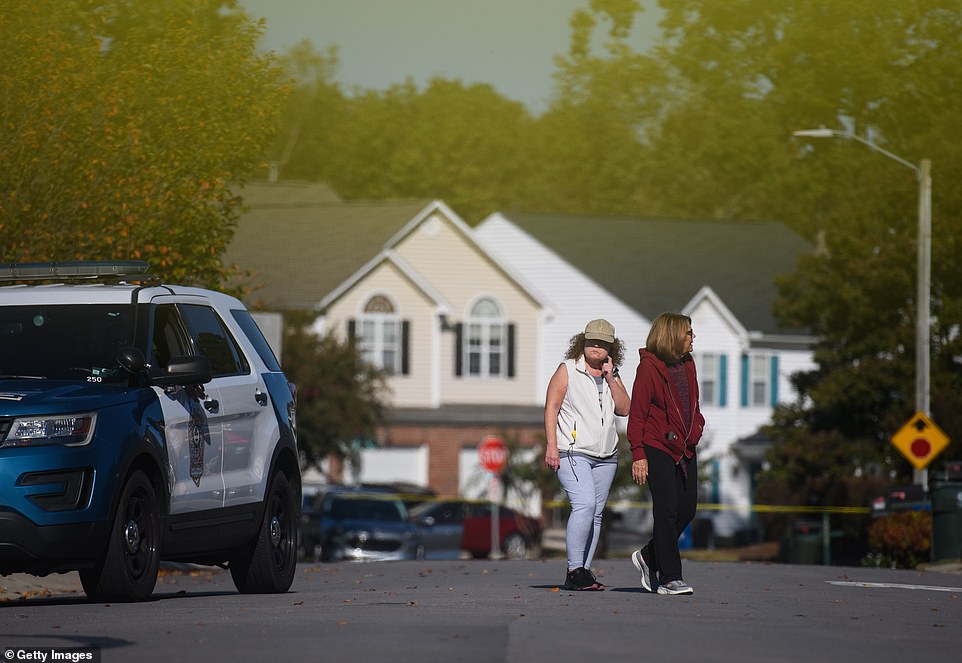 Residents walk along Castle Pines Drive in the Hedingham neighborhood on October 14, 2022 in Raleigh, North Carolina. Police are investigating a 2-mile area of land around the neighborhood where 5 people were shot and killed 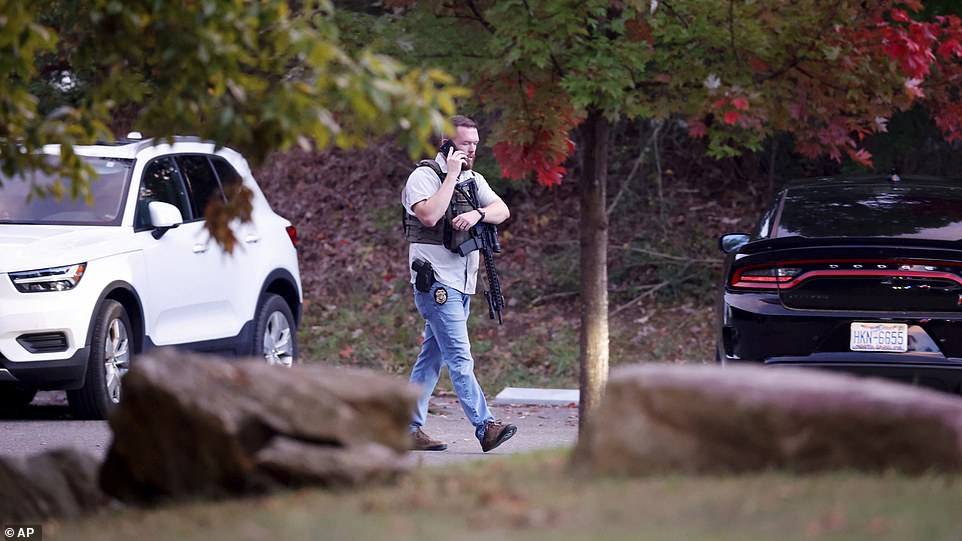 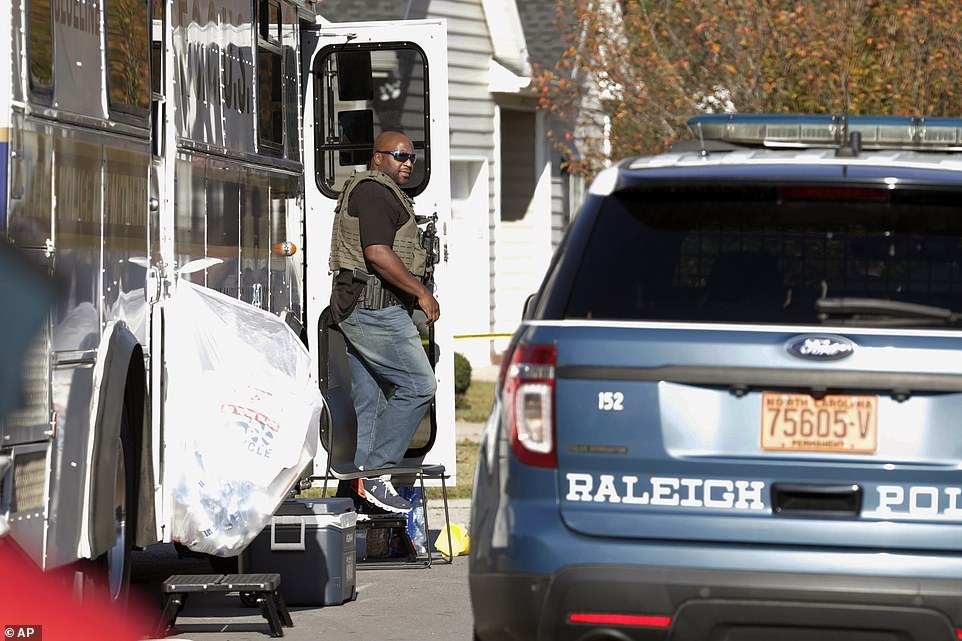 Police remain on the scene at Castle Pines Dr. and Sahalee Way following a shooting Thursday night in Raleigh, N.C., on Friday, Oct. 14, 2022. Police say a 15-year-old boy fatally shot at least two people in the streets of a neighborhood in North Carolina’s capital city, then fled toward a walking trail, where he opened fire, killing and wounding others 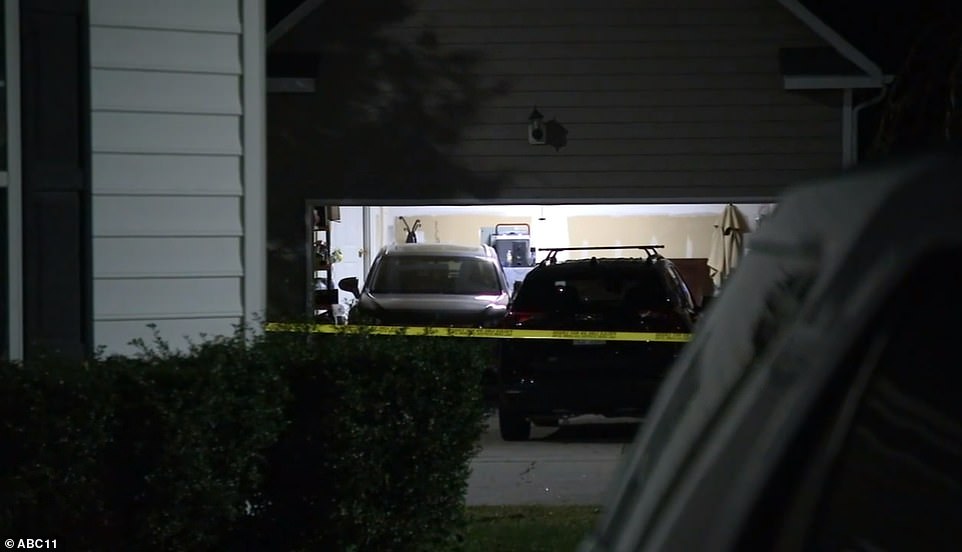 Police were seen searching a home near the scene of the shooting, believed to be that of the gunman and his family 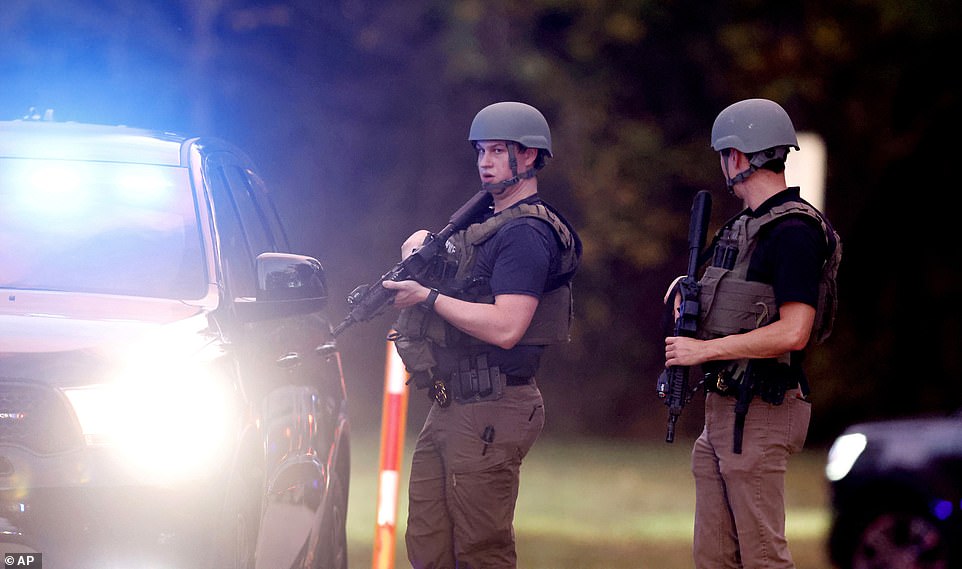 Law enforcement are seen at the entrance to Neuse River Greenway Trail parking at Abington Lane, in east Raleigh 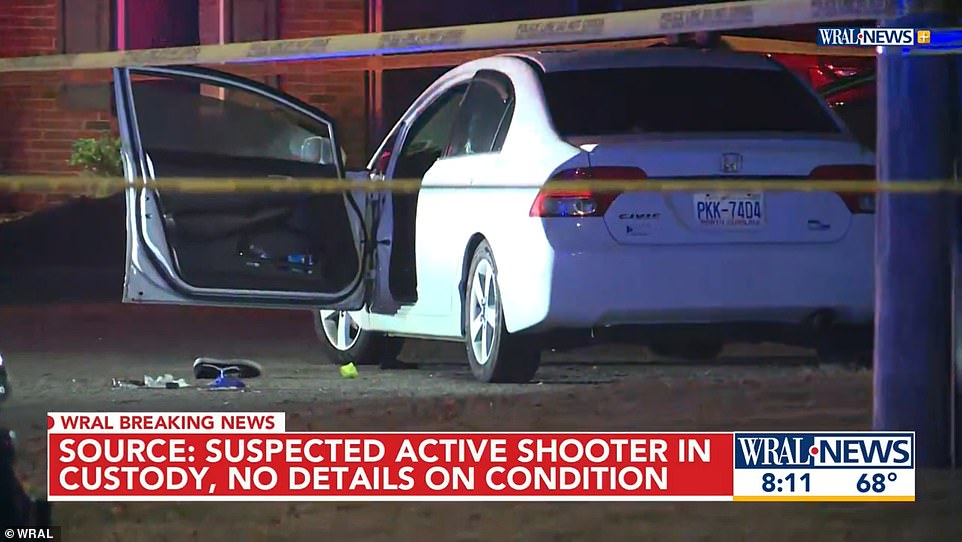 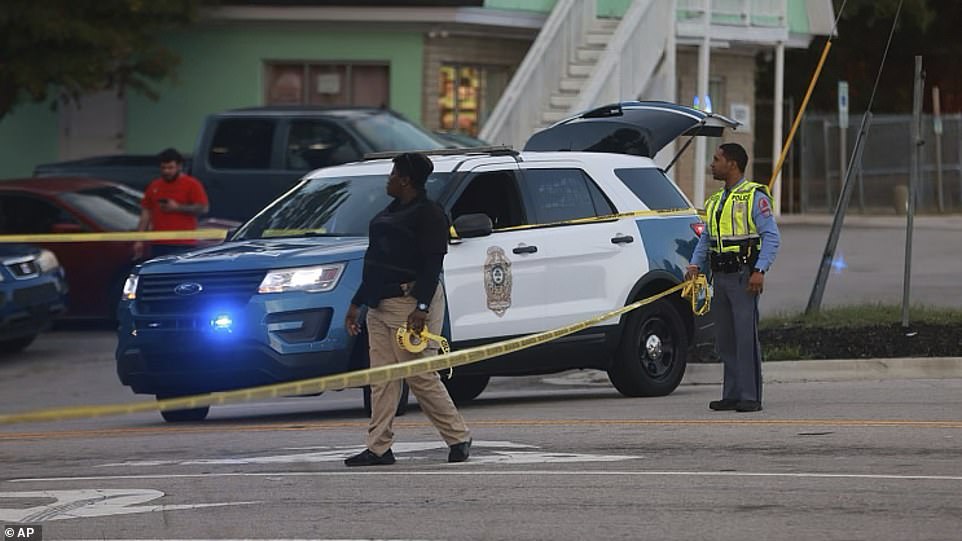 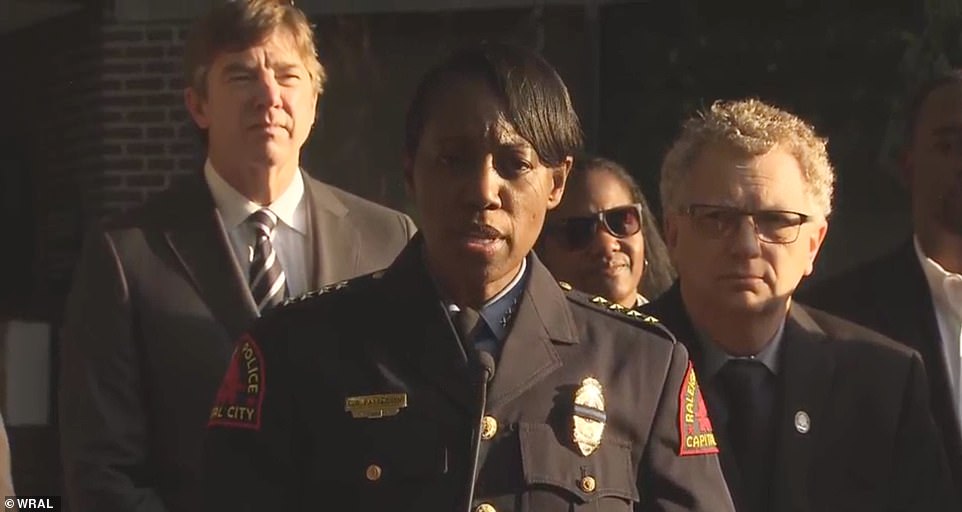 The shootings happened in the street. The gunman then fled towards the trail, where he shot some of the victims, before retreating to a barn.

North Carolina Governor Roy Cooper said: ‘Tonight, terror has reached our doorstep. The nightmare of every community has come to Raleigh.’

A local resident named Robert said: ‘I heard two gunshots, and they were really loud so I knew something was close by, and then I heard three other gunshots.

‘I saw him basically pass my house in the backyard. He had a long-barrel shotgun. He was dressed in camo. He had a full backpack on that was also camouflage.’

The quiet neighborhood is populated with single-family homes and golf courses.

Mary-Ann Baldwin, the mayor of Raleigh, said the suspect was ‘contained’, but police would not say whether they could communicate with him and his condition is not clear. 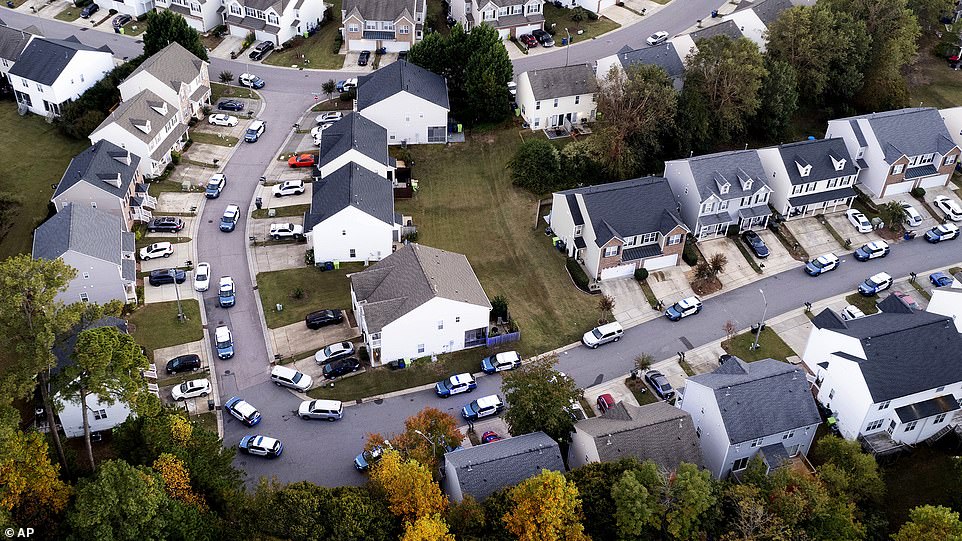 In this aerial image taken with a drone, Law enforcement work at the scene of a shooting in Raleigh, N.C., Thursday, Oct. 13, 2022 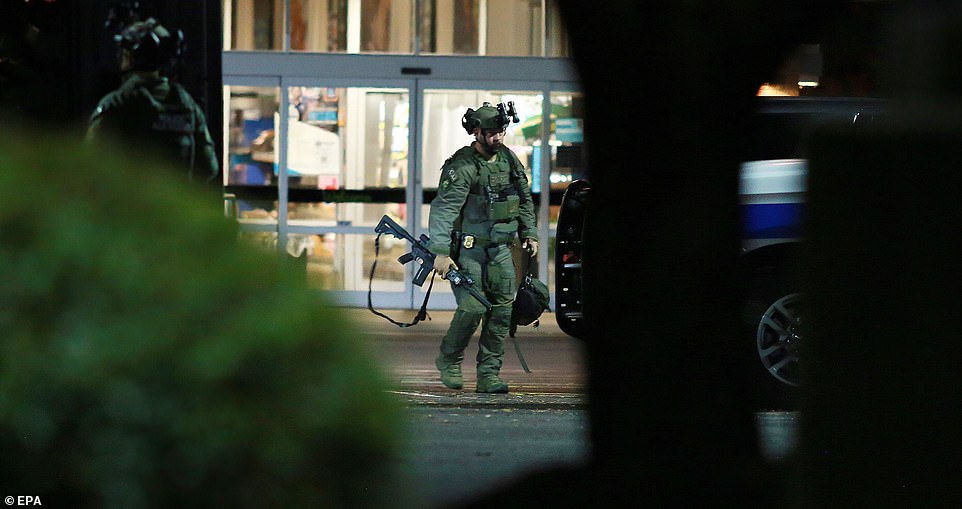 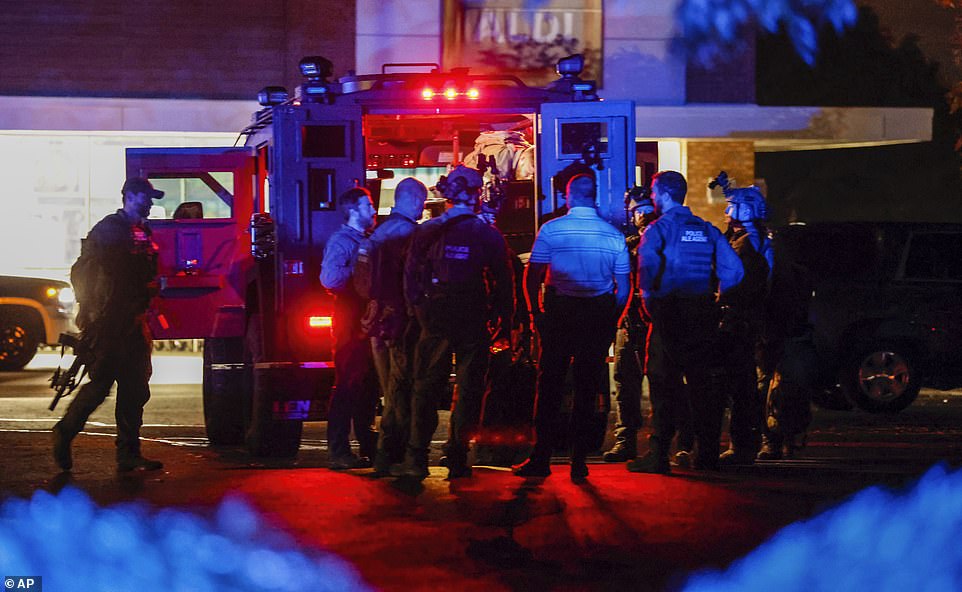 Law enforcement officers congregate outside an armored vehicle at the Aldi on New Bern Avenue in Raleigh after five people were shot and killed in the Hedingham Neighborhood and Nuese River Trail area in Raleigh, N.C., Thursday, Oct. 13, 2022

WRAL was broadcasting footage of the scene, showing the off-duty police officer’s car riddled with bullets.

Baldwin said it was ‘a sad and tragic day for the city of Raleigh’.

The mayor, visibly shaken, continued: ‘It’s a tragic day, because Raleigh police has lost one of its own.’

She said that more must be done to combat gun violence.

‘We must stop this mindless violence in America. We must address gun violence. We have much to do, and tonight we have much to mourn.’

Roy Cooper, the governor of North Carolina, praised law enforcement for their bravery, adding: ‘This is a senseless, infuriating and horrific act of violence that has been carried out against our community.’

ABC 11 said that there was a standoff, with the suspect barricaded in a barn.

A drone was sent into the barn to try and negotiate with the suspect, but the drone malfunctioned, the station said.

A huge emergency response started arriving on the scene at around 5pm.

‘The Raleigh Police Department is currently on the scene of an active shooting in the area of the Neuse River Greenway near Osprey Cove Drive and Bay Harbor Drive,’ the force tweeted.

‘Residents in that area are advised to remain in their homes.’

‘I think people are on edge coming out of a pandemic,’ she said.

‘I think we have mental health issues that are also contributing to that. I believe also too what we’re facing as a nation: the war in Ukraine, inflation, gas prices.

‘All those things coupled together, I think results in people wanting to solve their disputes or their issues with gun violence rather than just maybe taking a pause, stepping back, and then re-approaching the situation.’