Singapore: The presence of more than 200 suspected Chinese militia vessels at a disputed reef off the Philippines could be a prelude to violent clashes, according to a leading analyst who says the flotilla is only latest example of the superpower tightening the noose in the world’s most contested waterway.

In the latest diplomatic flare-up over competing claims to the South China Sea, the Philippines has protested after its coastguard discovered the vessels moored at a boomerang-shaped reef that both nations claim. 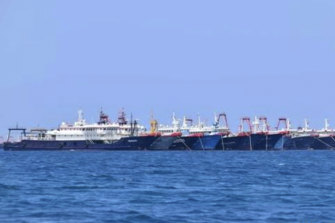 Philippines Defence Secretary Delfin Lorenzana voiced “grave concern” about the appearance of 220 ships at Whitsun reef, part of the Spratly Islands about 300km west of the Philippine province of Palawan.

Lorenzana labelled it a “clear provocative action of militarising the area” and called on China to cease encroaching on an area he said lay well within the Philippines’ exclusive economic zone.

Pamalakaya, a national federation of fishermen in the Philippines, urged its government to confront and expel the vessels, saying they represented a “blatant show of force by China” that bordered on military aggression and violated their sovereign rights.

China, which has built airstrips and military bases on artificial islands in the Spratlys, insists they were just fishing boats taking shelter due to poor weather.

However, Filipino political analyst and author Richard Heydarian said the assembly of boats was further evidence of China accelerating its aggressive ambitions, following its announcement last month of a new law allowing its coast guard to fire on foreign vessels.

“We’re moving towards a very dangerous phase in China’s domination strategy in the South China Sea,” he told The Sydney Morning Herald and The Age.

“This is really a tightening of the noose and potentially a prelude to more violent clashes or incidents in the South China Sea.”

Greg Poling, executive director of the US-based Asia Maritime Transparency Initiative, which tracks maritime activity in the South China Sea, said Chinese boats had been sighted at the reef regularly in the past year but the sheer number first spotted there on March 7 and made public by authorities on Sunday was significant.

“If the Filipinos are right and there really are 200-plus [vessels] … that’s the biggest deployment of militia boats we’ve ever seen anywhere,” Poling said.

Heydarian said it also demonstrated that Philippines president Rodrigo Duterte’s appeasement strategy towards Xi Jinping’s China had been “a total strategic disaster” for the country.

The Philippines won a landmark case at the Permanent Court of Arbitration at The Hague in 2016 in a judgment that effectively cast aside China’s sweeping historic claims to 90 per cent of the resource-rich zone.

But after taking office that year, Duterte set aside the ruling at the urging of China.

Duterte’s spokesman took a far more cordial line than the nation’s defence secretary and foreign minister, saying: “We have a close friendship. Everything can be discussed between friends and neighbours.”

On Tuesday, he said Duterte would speak with the Chinese ambassador about the boats amassed in waters claimed by the Philippines.

The incident shapes as a litmus test in south-east Asia for US President Joe Biden’s new administration swiftly following its frosty diplomatic summit with China in Alaska last week.

“Back in 2012 [China] took the Scarborough Shoal from the Philippines and [Barack] Obama didn’t see it as a red line and shortly thereafter we saw a spike in artificial island construction across the South China Sea,” said John Blaxland, professor of international security at the Australian National University.

“They tested the waters and they knew the Americans weren’t going to bite. What we’re seeing now is a fresh one for the Biden administration and it comes after Alaska.”

As well as China and the Philippines, Vietnam, Taiwan, Malaysia and Brunei have claims to parts of the South China Sea and Indonesia has pushed back against Chinese incursions into the waters around its Natuna Islands which overlap with the nine-dash line.