Prime Minister Scott Morrison has suggested social media could be used by “the evil one” to undermine Australian society, telling Christian leaders they are what the country needs right now.

Speaking at the Australian Christian Churches national conference at the Gold Coast last week, Mr Morrison also called out identity politics for being “corrosive” to society, and revealed he used the Pentecostal practice of laying on of hands while meeting people at disaster relief centres. 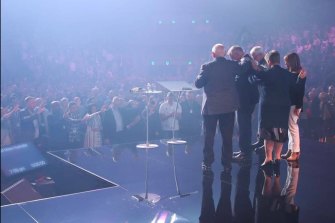 The speech gave a rare insight into the deep Pentecostal Christian faith Mr Morrison has and its impact on his political leadership. It was uploaded to YouTube on Sunday by secular advocacy group Rationalists Australia.

Mr Morrison said young people were being damaged by social media, and said it could be used by the Devil as a weapon.

“Sure, social media has its virtues and its values and enables us to connect with people in ways we’ve never had before, terrific, terrific, but those weapons can also be used by the evil one and we need to call that out.” 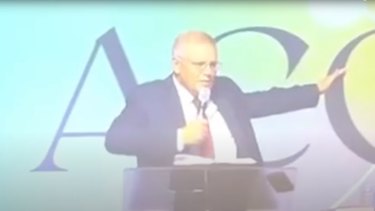 Mr Morrison has been a global leader in criticising social media companies, including forcing international action after the Christchurch massacre was livestreamed on Facebook. He has also pushed through laws that led tech giants to pay for Australian news content, and has flagged more intervention to deal with bullying and abuse online.

In the video he also spoke about how he had practised the ‘laying on of hands’ tradition, which is used in some Pentecostal churches to support prayers of blessing and healing.

“I’ve been in evacuation centres where people thought I was just giving someone a hug and I was praying, and putting my hands on people … laying hands on them and praying in various situations,” he said in reference to a recent visit to Kalbarri in the Pilbara after cyclone Seroja.

Mr Morrison was photographed raising his hands in a church service during the 2019 election, and has spoken openly about his Pentecostal faith and the impact it has had on his life. He also said “I have always believed in miracles” on the night of his underdog victory in that campaign. 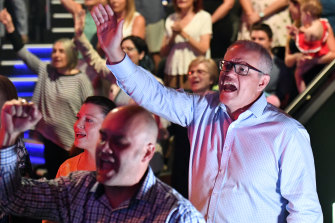 Prime Minister Scott Morrison and wife Jenny sing during an Easter Sunday service at his Horizon Church in Sydney during the 2019 election campaign.Credit:AAP

In the video, Mr Morrison said he had come to the conference for Christian leaders’ help.

“I can’t save the world, we both believe in someone who can,” he said “What you do and what you bring to the life and faith of our country is what it needs.”

“Because we believe that they are created in the image of God.

“In understanding that they can go on a journey I’m very confident you can take them on that and I’m relying on you to do that because that’s not my job – it’s yours.”

He also said “identity politics” was resulting in people losing their connection to each other and instead they were being defined by “boring tribes”.

A spokesperson for the Prime Minister said in a statement that Mr Morrison attended the event as he has many other religious events.

“The Prime Minister was invited to address Tuesday night’s event the same as he attends many other stakeholder events, including for other religious groups such as the Copts, Maronites, Jewish, Hindu, Buddhist and Muslim,” the statement said. “The usual transport and security protocols were followed as they are for any event the Prime Minister attends.” 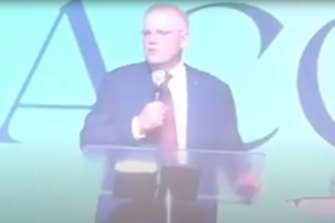 In the video, Mr Morrison revealed he asked God for a sign during a difficult run on the 2019 election campaign, before he unexpectedly visited Ken Duncan’s gallery on NSW’s central coast, and received a reminder of a Bible verse from Isaiah 40:31.

“I must admit I was saying to myself, ‘you know Lord, where are you, where are you? I’d like a reminder if that’s OK’,” Morrison said.

“I didn’t know it was supposed to be Ken’s gallery… and there right in front of me was the biggest picture of a soaring eagle that I could imagine and of course the verse hit me.

Mr Morrison won over religious voters at the 2019 election, but The Sydney Morning Herald and The Age’s Resolve Political Monitor last week found those voters are moving away from the Coalition.