Vladimir Putin has targeted multiple nuclear power planets during its war in Ukraine, President Zelensky said on Monday after Russia continued to point the finger at the Ukrainians.

French President Emmanuel Macron on Monday condemned the shelling of the Zaporizhzhia nuclear plant in Ukraine and said other nuclear plants at Rovno and Khmelnitski as well as the Nova Kakhovka dam had also been targeted.

Macron, in a statement after a phone call with Ukrainian President Volodymyr Zelensky, also said Zelensky had thanked France for its continuous support for the Ukrainian army via the delivery of supplies, a €200million purchasing fund for Ukraine and the French conribution to European peace efforts.

Russia said on Monday that shelling of the Zaporizhzhia nuclear power plant risked unleashing a grave nuclear accident and repeated accusations, denied by Kyiv, that Ukrainian forces were to blame.

The Kremlin called on ‘all countries of the world’ to pressure Kyiv into ceasing the attacks, for which Ukraine says Russia is responsible. 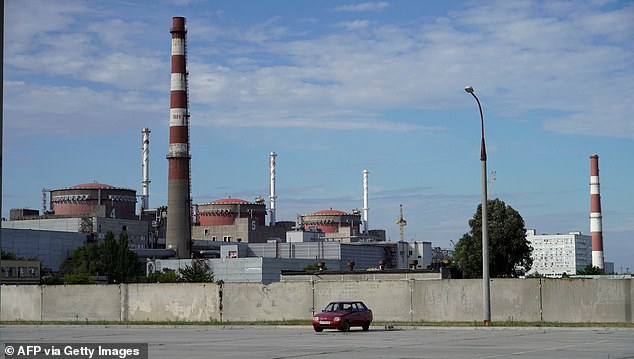 The repeated shelling of the plant in southern Ukraine, which flared again at the weekend, has raised concern about the potential for a serious accident just 300 miles from Chornobyl, site of the world’s worst nuclear disaster in 1986.

Reuters was unable to independently verify which side was responsible for the weekend shelling.

‘The plant is at risk of a nuclear accident,’ Alexei Likhachev, the director general of Russia’s Rosatom state nuclear corporation, was quoted as saying by Interfax.

‘We were in negotiations with the International Atomic Energy Agency (IAEA) all night,’ he said.

The power plant, which is under Russian control, was rocked by heavy shelling on Saturday and Sunday, drawing condemnation from the UN nuclear watchdog which said such attacks risked a major disaster.

A meltdown of a reactor at the plant or a fire of spent nuclear fuel could send a plume of radionuclides into the air, potentially spreading over a large area of Europe. 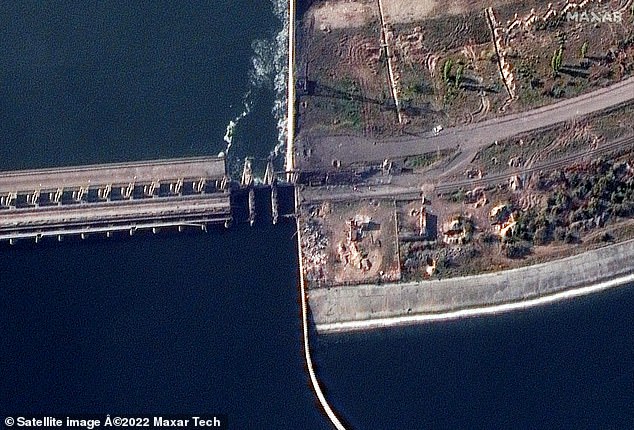 Nova Kakhovka dam, pictured, had also been targeted, according to the French president

‘This cannot but cause our concern,’ Kremlin spokesman Dmitry Peskov told reporters, referring to the shelling. ‘We call on all countries of the world to use their influence so that the Ukrainian armed forces stop doing this.’

The International Atomic Energy Agency (IAEA) said its mission at the plant had reported damage to a radioactive waste and storage building, cooling pond sprinkler systems, an electrical cable to one of the reactors, condensate storage tanks, and to a bridge between another reactor and its auxiliary buildings.

External power supplies were not affected and radiation levels at the plant remained normal, the IAEA said. 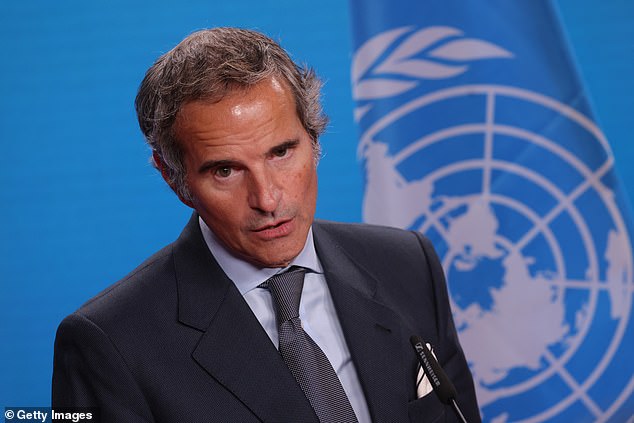 International Atomic Energy Agency Director General Rafael Grossi speaks to the media on November 15. Grossi has proposed the establishment of a nuclear safety and security protection zone around the power station, which Russia says the US must approve

Ukraine’s nuclear energy firm Energoatom said the Russian military shelled the plant. It said there had been at least 12 hits on the facility on Sunday.

IAEA Director General Rafael Grossi has proposed the establishment of a nuclear safety and security protection zone around the power station.

Rosatom chief Likhachev said this would only be possible if it was approved by the United States.

‘I think the large distance between Washington and Zaporizhzhia should not be an argument for the United States to delay the decision on a security zone,’ Interfax quoted him as saying.