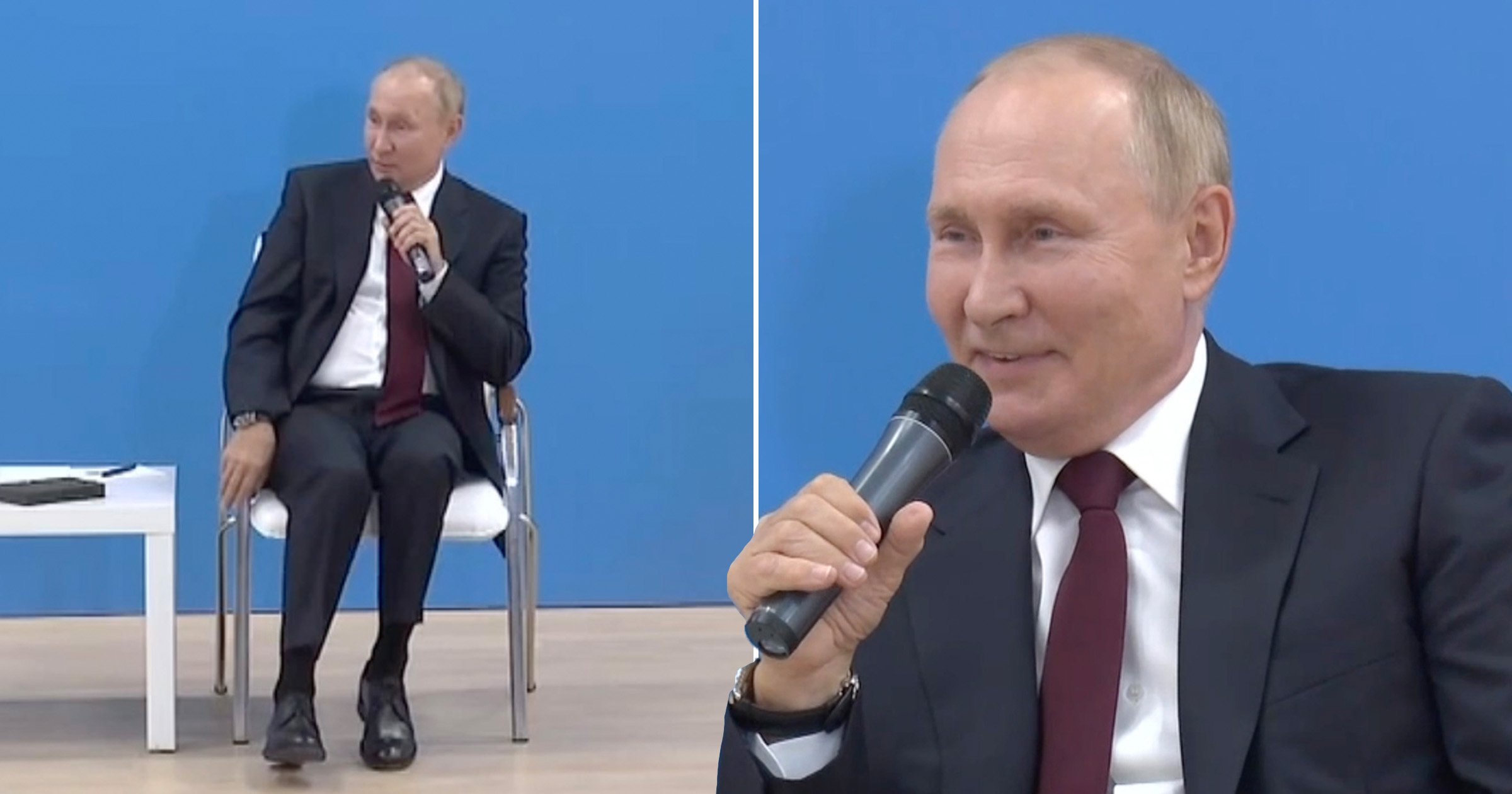 A giggling Vladimir Putin left Russian schoolchildren baffled with a bizarre joke as he seemed unable to stop his leg from twitching during a speech to a school.

Slumped in his chair and barely speaking above a whisper, the Russian president addressed a carefully selected audience of high IQ children aged between nine and 12 at a school in the exclave territory of Kaliningrad.

Everyone attending had been forced to quarantine for two weeks prior to the event, fuelling further speculation about the 69-year-old leader’s supposed ill health.

Conducting what the Kremlin called an ‘open lesson’, Putin appeared unable to stop his legs from twitching continuously as he delivered a heavily distorted history lesson in which he implied Ukraine and Russia should be part of the same country.

But in addition to reiterating his position on Ukraine, Putin also lectured the crowd on the importance of discipline, before confusing everyone with a strange joke about a ‘rubber bum’.

Speaking to the children, Putin said: ‘You need to be motivated to reach your goal.

‘And, of course, hard work. All this together is very important.

‘Working hard is a talent in itself. It’s not just, excuse me, a rubber bum.

‘It is a talent to force oneself to work, and to be able to do it productively.’

A video later emerged of the president chuckling at his off-the-cuff remark while the rest of the crowd looked on in silence.

Russian newspaper Moskovsky Komsomolets suggested Putin may have been telling pupils not to see diligence as ‘rubber booty’.

Elsewhere in the talk, Putin broadened the scope of the war and said he wanted to reclaim the territories he saw as ‘traditionally Russian’.

He referred to the Donbas as Russia’s ‘historical territories’, adding: ‘They started creating an anti-Russian enclave on the territory of today’s Ukraine that is threatening our country.

‘So our guys who are fighting there are defending both the residents of Donbas, and defending Russia itself.’

During a Q&A session later in the talk, Putin said today’s Russian children ‘don’t even know Russia and Ukraine were once part of a united country’, and referred to the wave of protests that forced Ukraine’s pro-Russian president from office in 2014 a ‘coup’.

‘Everybody thinks that some kind of aggression is coming from the Russian side today,’ Putin said during an awkward hand-shaking session that closed out the event.

‘But nobody understands, nobody knows that, after the coup in 2014, the residents of Donetsk, a large part of Luhansk and Crimea did not want to recognise the coup,’ Putin said.

‘A war was started against them – and it was waged for eight years.’

He added: ‘On the territory of today’s Ukraine, they began to create an anti-Russian enclave that threatens our country.

‘Therefore, our lads, who are fighting there, are protecting both the residents of the Donbas region, and defending Russia itself.

This is not the first time the Russian president has appeared uncomfortable during public appearances as of late.

Recent photographs have emerged of Vladimir Putin gripping onto tables during meetings with Russian military officials and video footage captured the President clutching a podium during a Kremlin awards ceremony.

President Putin appeared unsteady and shaking as he awarded the State Prize of the Russian Federation in June, and during an appearance at the Russian victory day parade he appeared visibly pale and walked with a notable limp.