Kremlin hints Putin may be open for TALKS with the U.S. after accusing Washington of ‘massive cyber-aggression’ – as Biden speaks with Western leaders including Macron following global criticism of his gaffe

Russia is accusing the U.S. of leading a massive campaign of ‘cyber aggression’ to counter its Ukraine invasion – as Kremlin mouthpiece Dmitry Peskov said relations were being harmed by ‘personal insults’ and called for more security dialogue.

The attacks came even amid signs of potential progress in talks between Ukraine and Russia taking place in Turkey – setting up conflicting signals on the prospects for diplomatic advancements amid Russia’s brutal war in Ukraine.

‘One way or another, sooner or later, we will have to speak about questions of strategic stability and security and so on,’ said Kremlin spokesman Dmitry Peskov Tuesday.

Russia announced it will ‘radically reduce’ military activity outside Kyiv and Chernihiv after ‘meaningful’ negotiations were held in Turkey Tuesday, days after signaling it was changing its military objectives after completing the initial phase of its ‘operation’ in Ukraine.

Amid the swirling events, President Biden began a call with top European allies about Ukraine.

They were to ‘discuss the latest developments regarding Russia’s invasion of Ukraine,’ according to a brief White House statement. 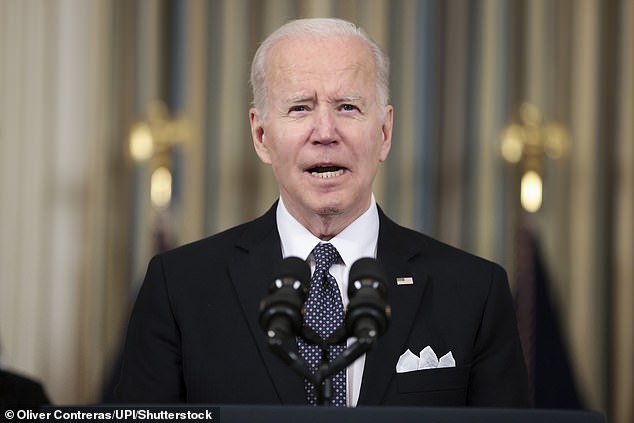 President Joe Biden said Monday he was expressing his ‘personal feelings’ when he spoke about Putin and said he ‘cannot remain in power.’ He repeatedly declined to answer questions about meeting with Putin

Macron has kept up communications with Putin and has been seeking to broker a cease fire. He told broadcaster France 3 on Sunday following Biden’s comments that, ‘If we want to do that, we can’t escalate either in words or actions.’

Russia accused the United States on Tuesday of leading a massive campaign of ‘cyber aggression’ that was behind hundreds of thousands of malicious attacks a day while Russia has troops in Ukraine.

The foreign ministry said media, critical infrastructure and life support systems had been targeted, with the unprecedented scale pointing at U.S. and NATO-trained special forces as well as hackers acting on behalf of Kyiv’s western sponsors.

The accusations come days after the White House said Russia had been making preparations for cyber attacks, and warned U.S. business and infrastructure to step up their own security precautions.

‘The sources of attacks will be identified and the attackers will inevitably be held accountable for their actions in accordance with the law,’ the Russian statement said.

NBC News reported last month that U.S. President Joe Biden had been presented with options that included disrupting Russia’s internet, power and railroad switches. But the White House said that was ‘wildly off base.’

The foreign ministry said it believed Ukraine’s government, which in February announced the formation of an ‘IT army’, was involved and had launched an ‘offensive cyber force’.

Peskov’s complaint about insults came after Biden called Putin a ‘butcher’ after meeting with Ukrainian refugees in Warsaw. He has also called Putin a ‘killer’ amid Russia’s invasion, which has resulted in millions of refugees, flattened buildings, and civilian casualties.

Biden also wrapped up his Warsaw speech on Saturday by saying: ‘For God’s sake, this man cannot remain in power.’

However, he said: ‘One way or another, sooner or later, we will have to speak about questions of strategic stability and security and so on.’

Biden said Monday he was expressing his ‘personal feelings’ when he spoke about Putin, and was not setting a policy of regime change. ‘I was expressing the moral outrage I felt towards this man,’ he said.

He also rejected the idea his words complicated diplomacy with Russia. ‘I don’t think it complicates it at all,’ he said.

Biden also declined repeated direct questions about whether he would meet with Putin again.

‘The question is: Is there something to meet on that would justify him being able to end this war and be able to rebuild Ukraine. That’s the issue,’ Biden said.