A woman in South Australia who tested positive to COVID-19 after returning from a trip to Victoria is believed to have been the victim of a targeted attack, with local police investigating a suspicious car fire.

Emergency services responded to reports of a car fire at Sandalwood Crescent, Mount Gambier, just before 10pm on Tuesday. 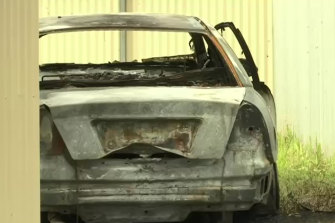 The burnt out shell of a car believed to belong to a Mount Gambier woman who tested positive to COVID-19 after returning from Victoria.Credit:Nine News

A Holden sedan had been set alight in the driveway and flames were threatening to spread to the house. However, fire crews managed to extinguish the blaze, which destroyed the car and caused surface damage to the building.

There was no one at home during the fire and there were no reported injuries.

Mount Gambier entered seven days of heavy restrictions on Monday after the woman, a mother of four, tested positive to COVID-19 earlier this week, following a visit to family in the Victorian town of Casterton.

The town was within South Australia’s 70-kilometre border bubble with Victoria when she travelled, but the zone has since been reduced to a 30-kilometre buffer.

The woman is in her 40s, was not vaccinated, had been symptomatic since September 26 and got tested on October 1 when she returned to Mount Gambier.

Crime scene investigators and local detectives attended the scene of the fire overnight and the investigation is continuing.

SA Police Commissioner Grant Stevens said the details of the car fire were not yet clear, but urged people to show tolerance.

“People shouldn’t assume that they know what’s going on. It’s completely unnecessary. It’s unwanted, they have committed a serious crime and if we do detect them, we’ll be dealing with them appropriately. I’m just asking people to show tolerance.”

“We don’t know exactly what’s going on. Let us get to the bottom of this, and we’ll provide that information to the community as quickly as possible.”

The woman is currently in hotel quarantine in Adelaide with her children, and she has not been active in the community since returning home. Her four children have all tested negative to COVID-19.

It follows another positive case – a woman in her 30s – who returned to South Australia from Victoria on Friday last week.

The woman had been granted an exemption to return to Adelaide and had tested negative for COVID-19 on September 30, before travelling home. She tested positive on arrival at the Adelaide Airport clinic.

South Australia’s border bubble with Victoria has been reduced from 70 kilometres to 30 kilometres for seven days.

Those crossing the border are now also required to have had at least one dose of a COVID-19 vaccine and to get tested every seven days.