Sainsbury’s security guard punches boy, 12, in the face after accusing him of stealing from the supermarket’s shelves

This is the shocking moment that a Sainsbury’s security guard punched a schoolboy in the face after being accused of shoplifting.

Footage posted online showed the child flying backwards after the guard hit – with the boy being reportedly left too ‘traumatised’ to go outside after the incident.

The violent guard can be heard saying ‘I punch him’ while he tries to avoid being filmed before claiming that the boy had hit him first.

The guard then added: ‘It’s all on camera, so then he punched me first. He is stealing. 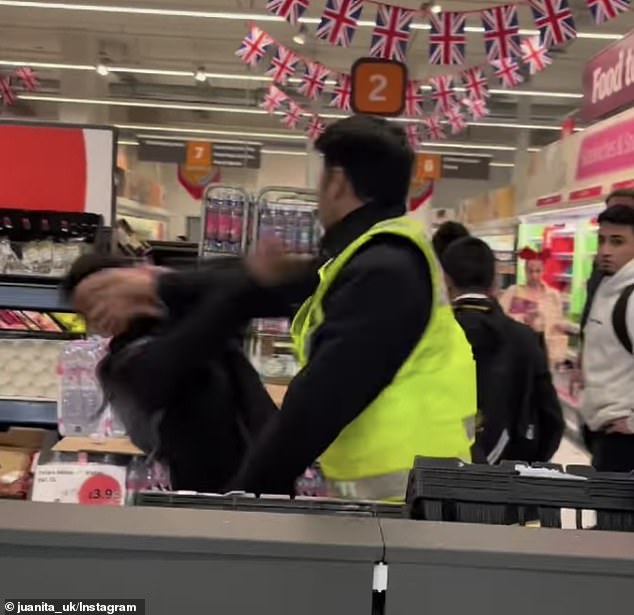 The sister of the boy has said that the security guard’s behaviour was ‘disgusting’ and made the claim that he had not actually been stealing.

The boy was said to have been in the Sainsbury’s store in Elephant and Castle in south London to buy a snack after school.

His family have said that the guards checked the boy’s bag and did not find stolen items.

Speaking to The Sun, the boy’s sister said: ‘He asked one of the security guards if he could leave his bike in the store entrance, because he didn’t have a chain.

‘The black security guard allowed them to do that, and then they went into the store to get their snacks.

‘As they went to the back of the store, the other security guard was trailing them, and when they went to go and pay he told them he needed to search them because he thought they were stealing. 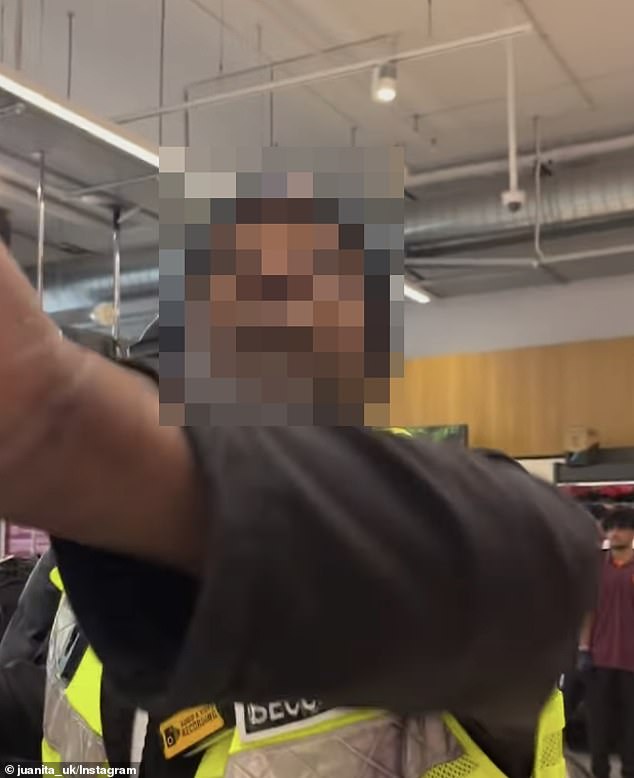 Security guards attempted to stop the filmer from documenting the altercation

‘They didn’t find anything on them or in their bags, because they didn’t take anything. But the security guard carried on accusing them of stealing from the shop.

She added: ‘He doesn’t want to leave home, he won’t go shopping and it is just horrible for us to see as a family.

‘He feels humiliated and it’s gone viral which is so difficult for us to see.

A spokeswoman for Mitie said: ‘The video circulating on social media does not capture the whole incident.

‘Earlier CCTV shows two youths enter the store, one of them places goods in his bag and they attempt to leave without paying.

‘The Security Officers asked the youths to return the items and an altercation took place where our officer was physically assaulted and verbally threatened.

‘Police attended the scene and we are conducting an internal investigation.

‘With retail crime and violence at unprecedented levels, our colleagues work in extremely challenging environments and are often in harm’s way.’

A Sainsbury’s spokeswoman said: ‘We are urgently investigating this incident.’

A Metropolitan Police spokesman added: ‘On Wednesday, 25 May police were called to a shop on New Kent Road where they spoke to a group of people reporting that a member of security staff had assaulted a child the previous day.’