A SCHOOL bus driver was today jailed for three years after crashing into a bridge and leaving kids with life-changing injuries.

Martin Walker ripped the roof off his double-decker when he ploughed into the archway, injuring 41 youngsters, three of them seriously. 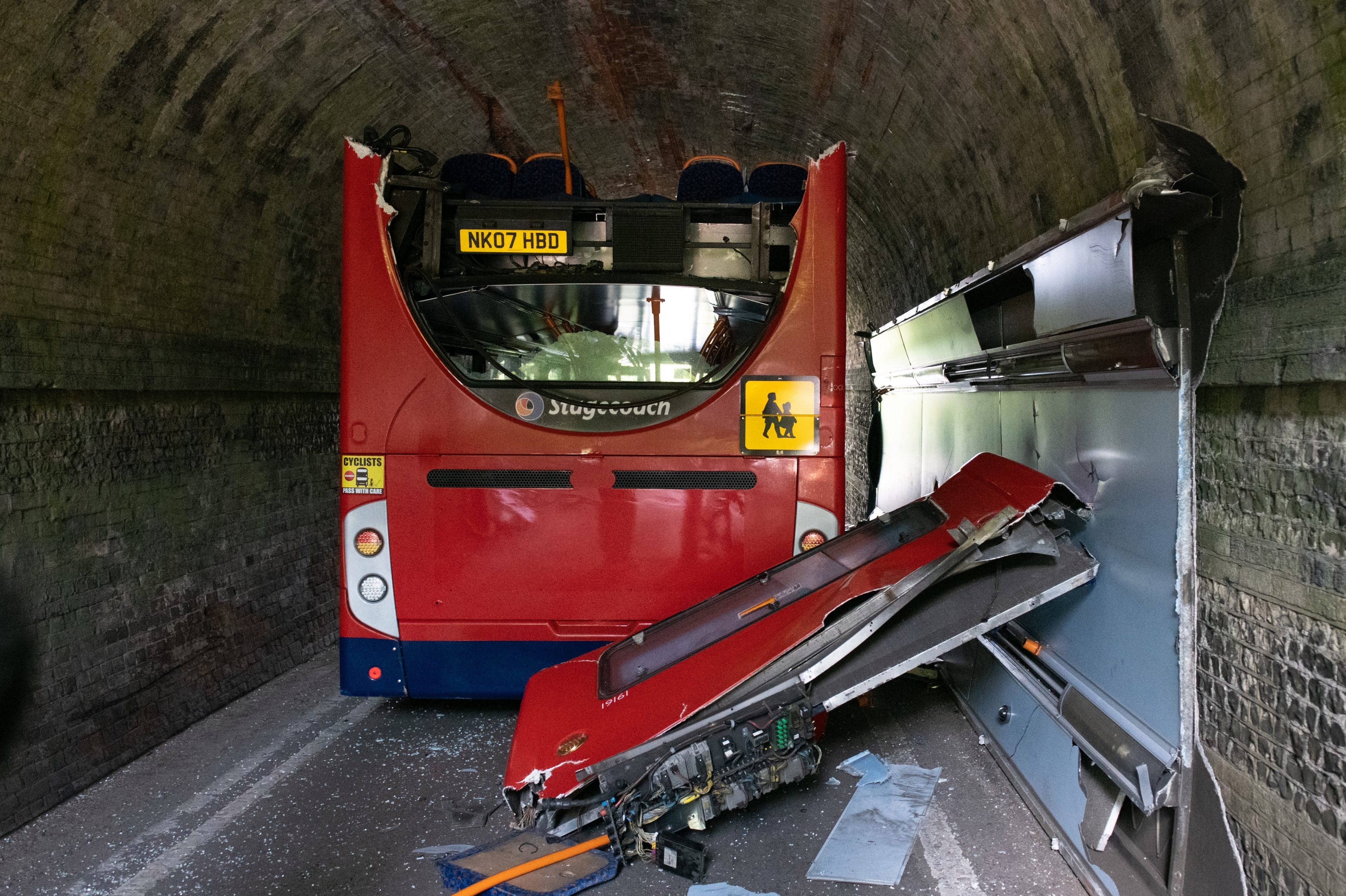 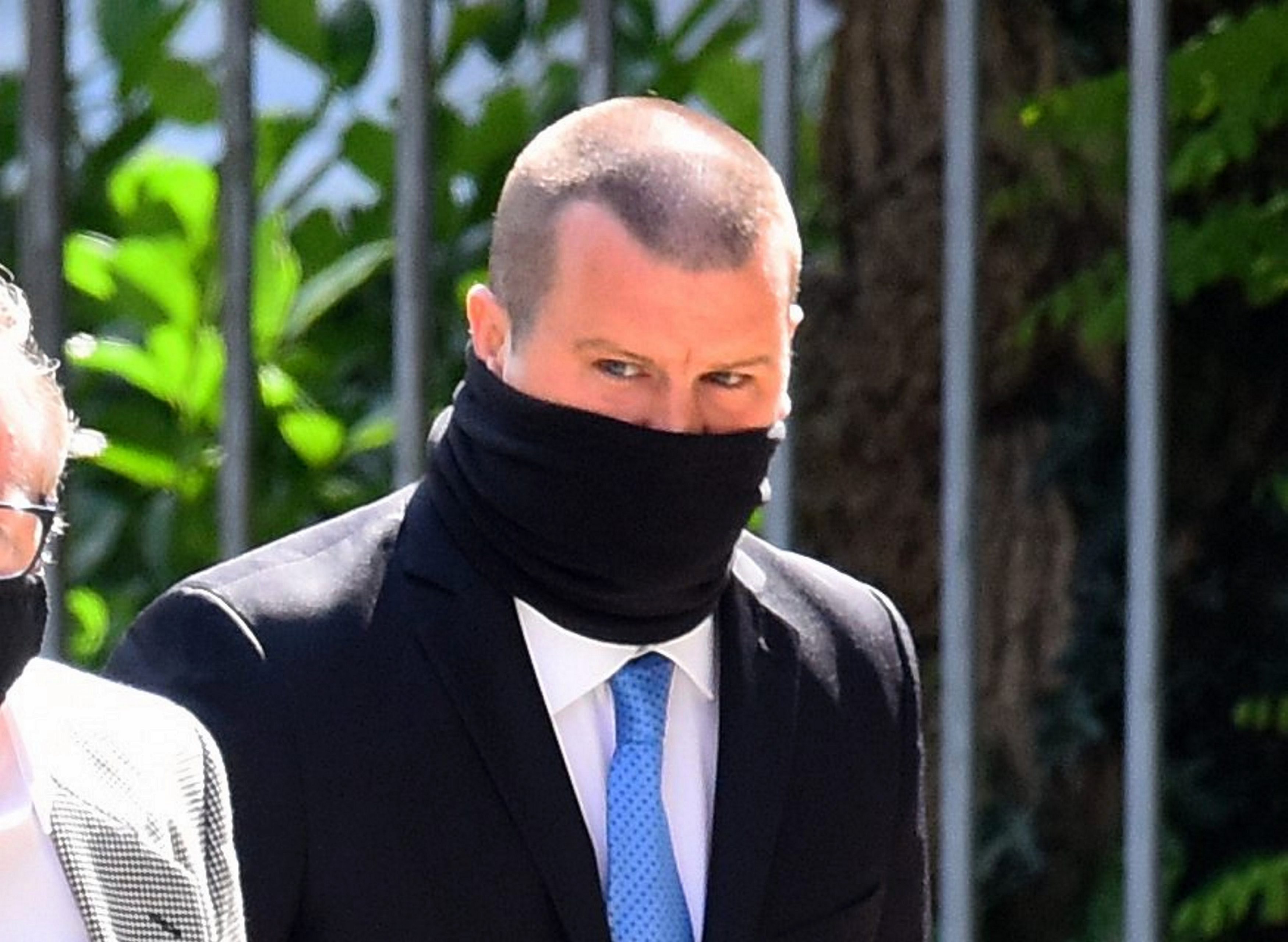 He pleaded guilty to three charges of causing injury by dangerous driving and was sentenced to three years behind bars.

A judge condemned his "lack of regard for the safety of your young and vulnerable cargo".

The incident happened while Walker transported 74 pupils aged between 11 and 16 to a Hampshire school on September 10 last year.

He drove the 13ft 11in high bus under the 12ft bridge in Wellhouse Lane at a speed of 10mph, ignoring cries from students that it wouldn't fit.

Drivers behind watched as the roof was torn off and dumped in front of their vehicles, while children onboard ducked for cover as glass smashed around them.

Dramatic pictures from the site showed the bus wedged underneath the bridge – with the top deck completely destroyed.

Nicholas Cotter, prosecuting, read statements from the three children who were most seriously injured on the top deck.

A 16-year-old girl told the hearing how her dreams of becoming a model had been dashed because the accident had left her face scarred. 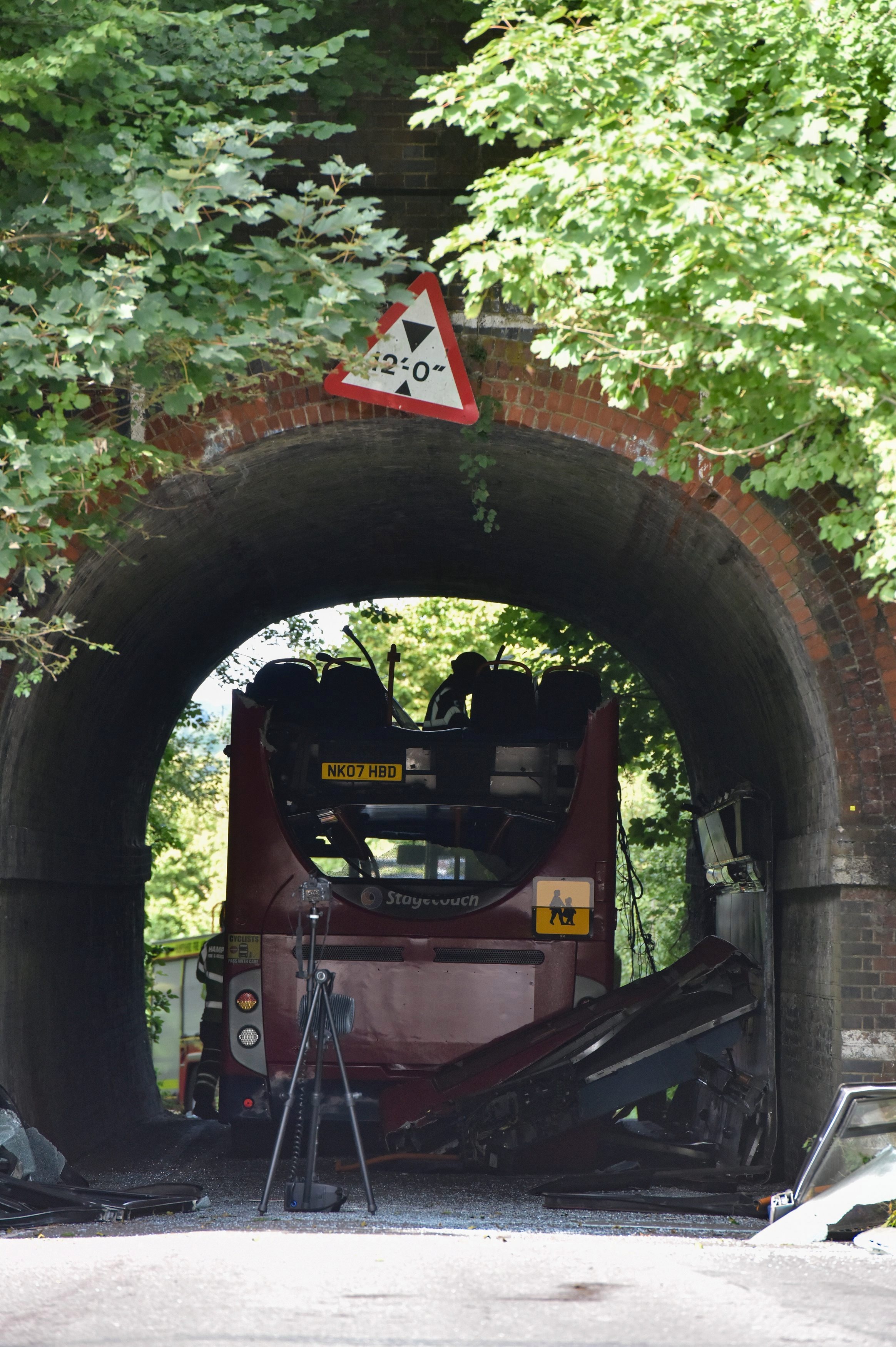 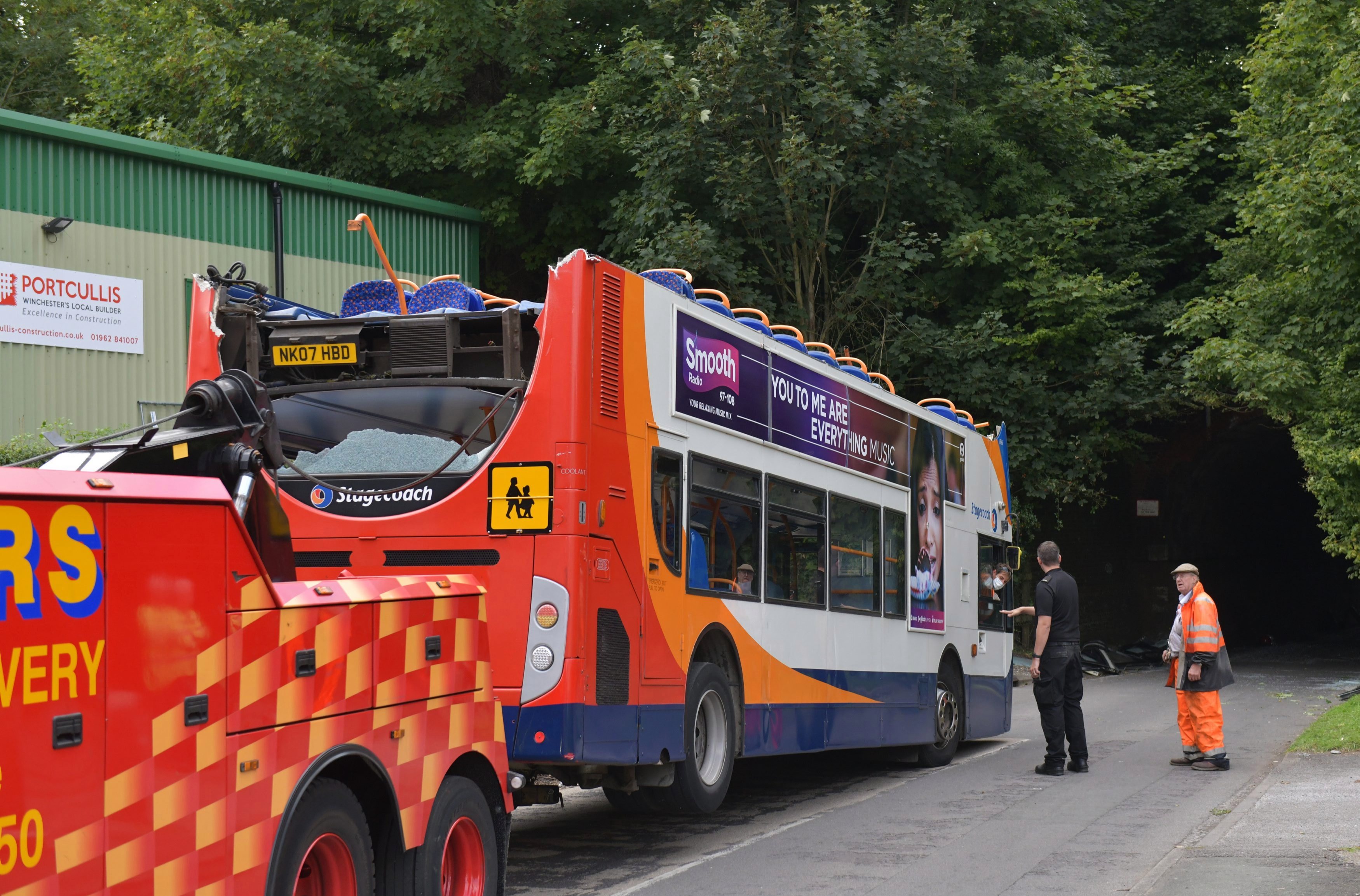 She added: "Everyone on the bus was panicking and climbing down the back of the bus to get out. I was dripping blood everywhere.

"I saw the bus driver sat on the floor. He didn't help anyone, that image will stay with me forever. I just couldn't understand why he wasn't helping anyone."

A boy, 14, suffered a deep cut that went all the way to the bone on his head, damaging the nerves which meant he had to have surgery to repair them but he still has a scar there now.

He said: "The circumstances of that day will stick with me forever. Every time I look in the mirror I am reminded."

'I THOUGHT I WAS GOING TO DIE'

The third victim, a 15 year old girl, said: "The noise of the roof being ripped off, sounds of glass and people screaming is something I will never forget.

"For a time I thought I was going to die. It was a horrible feeling that I can't really explain other than it was a feeling I wish I didn't have to feel."

She suffered deep cuts above her left eye and on her chin and several other minor cuts to her face.

This left her with nerve damage that required surgery, but she still had trouble moving her eyebrow and lip afterwards.

She said she was told by a doctor that she "may never be able to smile again". 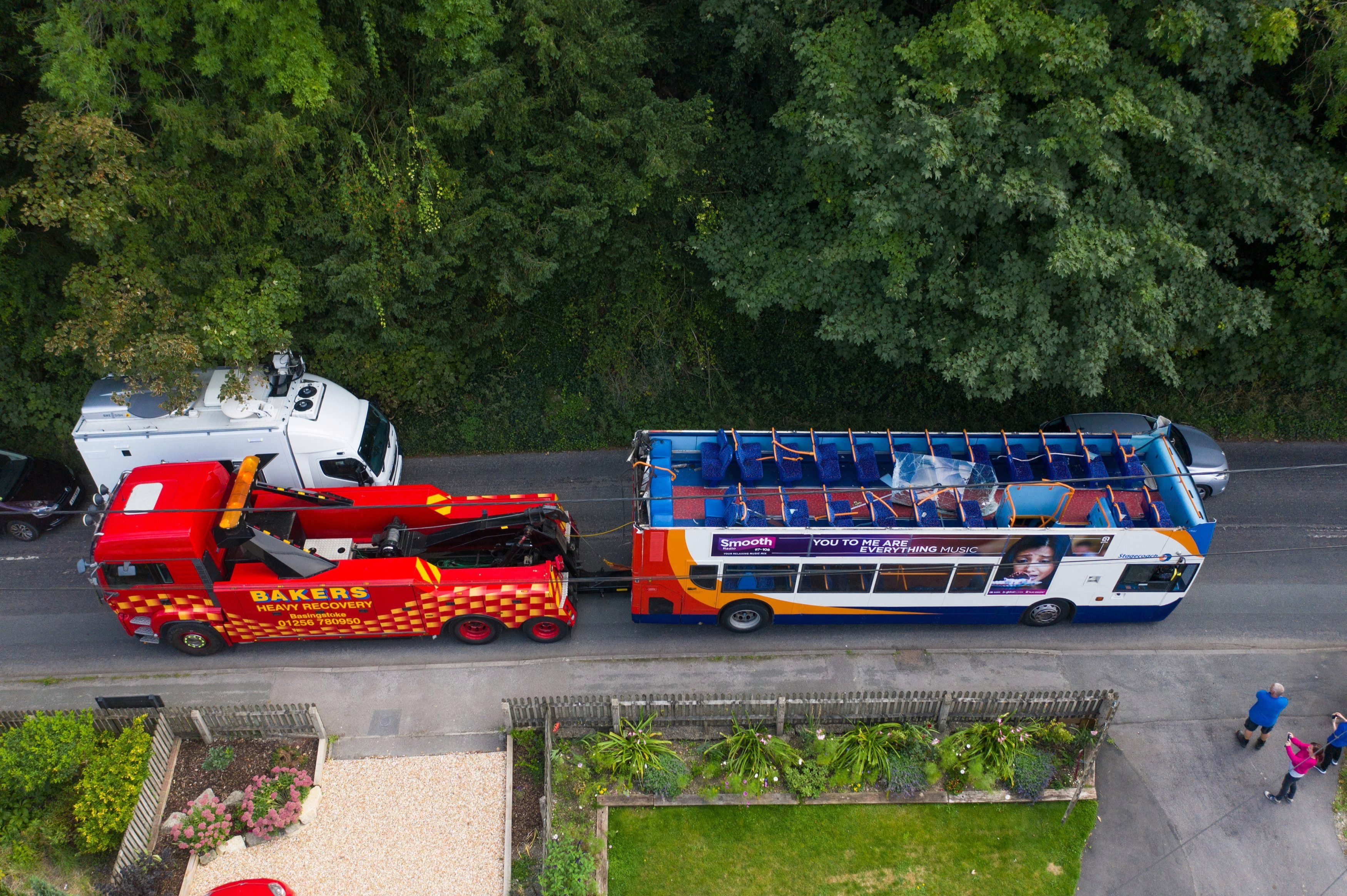 Nicholas Cotter, prosecuting, added that the children continue to suffer anxiety, with one of the girls saying she had tried to kill herself.

He also listed the injuries of another 15 students, which included cuts, bruises and whiplash, and said a total of 41 children had been hurt.

Sentencing the 37-year-old at Winchester Crown Court, Judge Angela Morris told him: "The entire roof of the bus was effectively sliced off by your actions, with the result that those students on the upper deck were left with varying degrees of injuries and trauma.

"It's clear that many of those young passengers were left injured, traumatised and distraught on that morning.

"In respect of the three students who fell victim to the most serious injuries, it is clear that each of them has been permanently scarred, both physically and emotionally, as a result of your dangerous behaviour."

Mr Cotter told the court that Stagecoach employee Walker had been driving the route for the first time when he had taken a wrong turn without realising.

For a time I thought I was going to die. It was a horrible feeling that I can't really explain.

He added: "This is an experienced man who should have known the size of his vehicle and the responsibilities he had driving it.

"The defendant seemingly paid no heed to the height restriction signage that was in place en route to the bridge.

"A number of students spotted they were going the wrong way and voiced their concerns, and it appears some of them were beginning to shout that it wasn't going to fit under the bridge.

"Sadly these pleas were seemingly not heard."

"It is frightfully lucky that more harm was not done," he added.

Neil Fitzgibbon, defending, said Walker was diagnosed with learning difficulties and dyslexia as a child but until this accident had been a "careful and diligent driver".

He said the defendant had only been given a "partial familiarisation" trip on the route by his supervisors at Stagecoach and should have been given more training because of his learning disabilities.

"He believed he was on the right route and everything he was doing had been risk-assessed by Stagecoach," he added.

"Since this accident he has been consumed with remorse, the very idea that he has caused such pain to others by his action is deeply distressing to him."