Vaccinating younger children against coronavirus could help protect them against long Covid as well providing indirect protection for older relatives, experts have claimed.

Dr Mike Tildesley, an epidemiologist from the University of Warwick, said that while the risks of severe Covid are low in young people, long Covid can be more prevalent in them and vaccines can help reduce the chances of developing it.

And Dr Deepti Gurdasani, an epidemiologist at Queen Mary University, also leant her support to widening the rollout to schoolchildren.

She said the benefits outweigh the risks with vaccination for children and insisted ‘every day we delay, more children are getting infected’.

It comes after Sajid Javid last night told the NHS to start preparing to jab children as young as 12 after SAGE experts warned a ‘large’ Covid wave was likely to hit schools next month.

The Health Secretary said he was putting plans in place so the country was ‘ready to hit the ground running’ if the Joint Committee on Vaccination and Immunisation (JCVI) — who advise the Government on vaccine policy — gave the go-ahead to jab younger children.

The NHS has been told to start recruiting and training staff to go into schools to give pupils Covid jabs early next term, if they’re approved. Headteachers will be told to prepare space where the vaccines can be given or be ready to allow pupils time out of lessons to get the jab elsewhere.

It is the clearest signal yet that ministers expect the jab for younger children to be approved imminently. 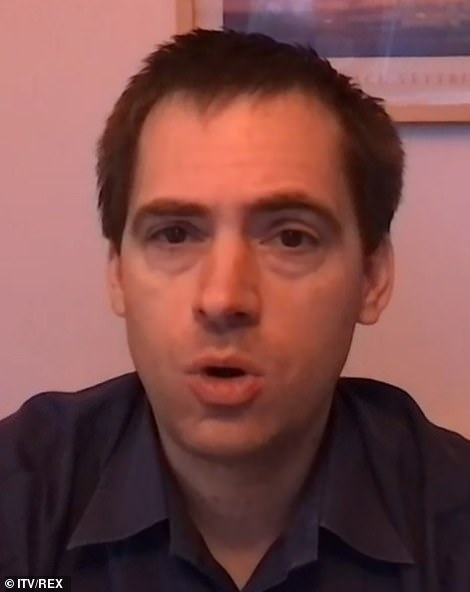 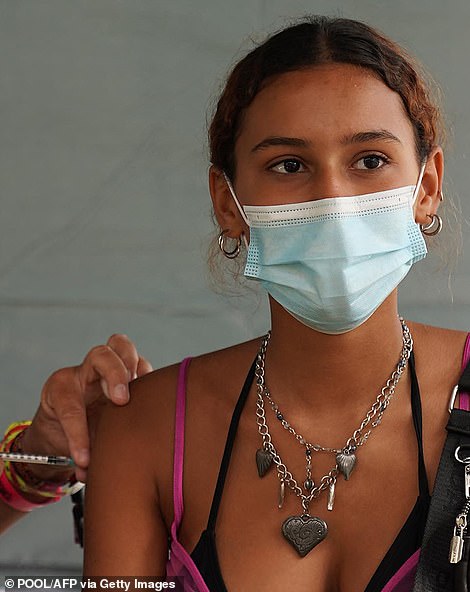 Dr Mike Tildesley (left), an epidemiologist from the University of Warwick, says vaccinating younger children against coronavirus could help protect them against long Covid as well providing indirect protection for older relatives. Right: A 16-year-old gets an injection at a walk-in Covid vaccination clinic at Reading Festival yesterday 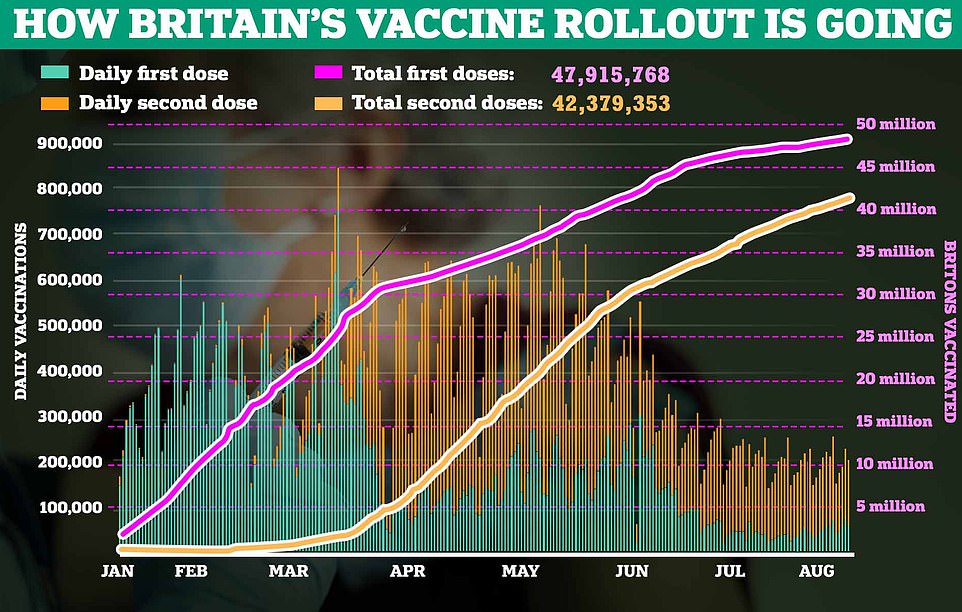 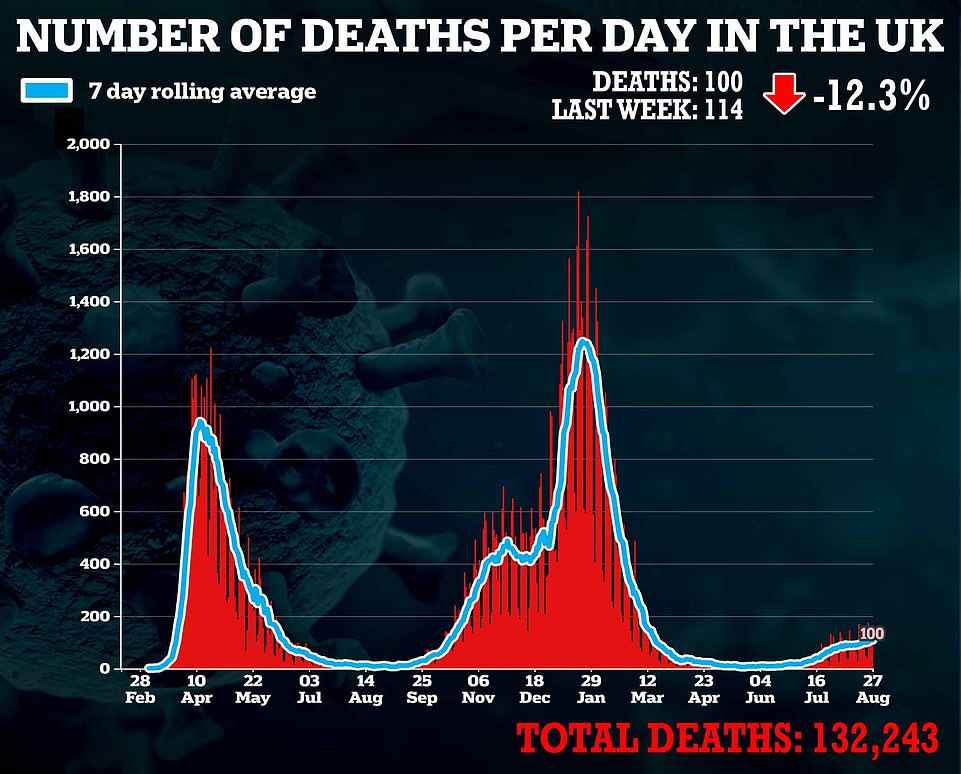 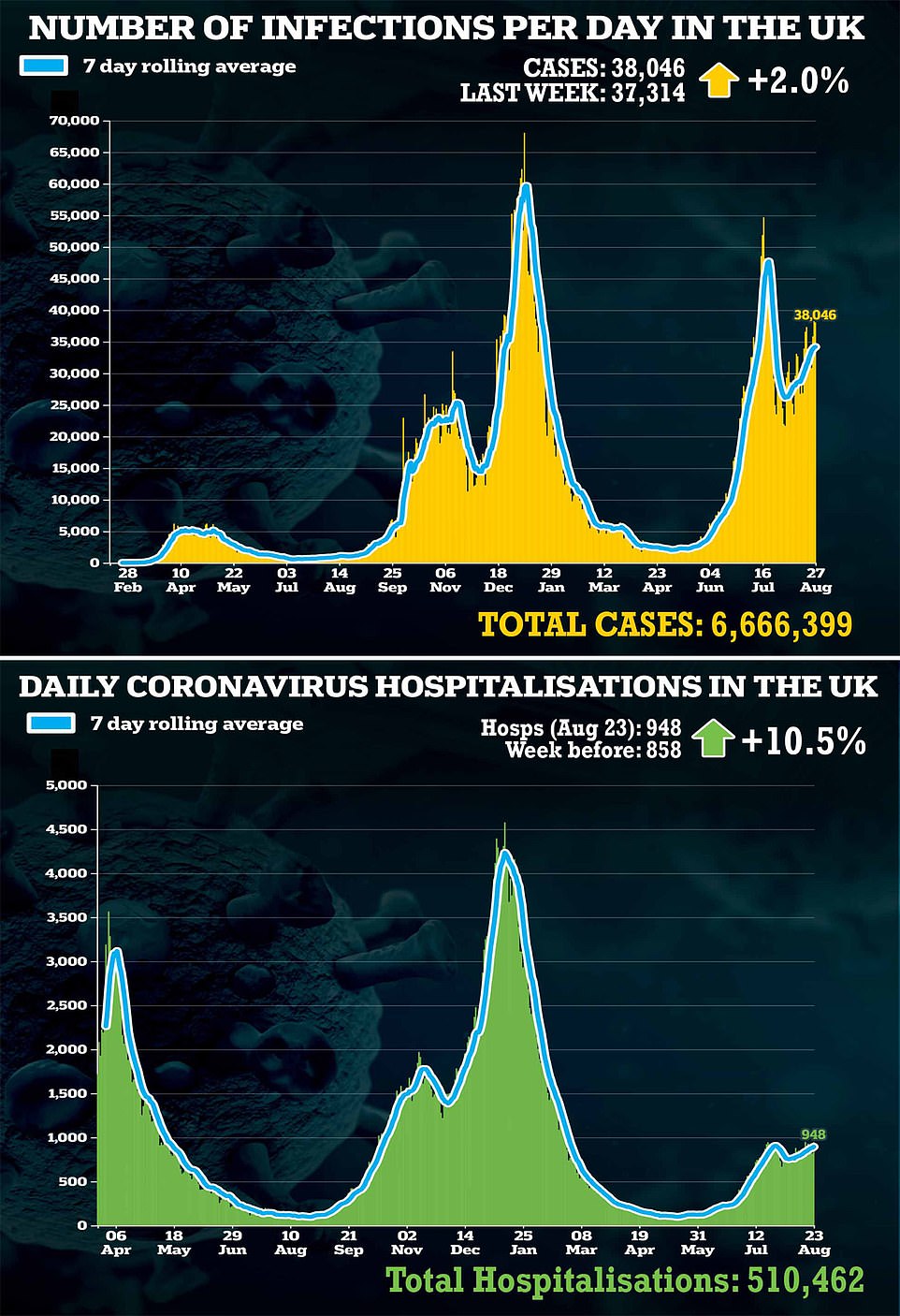 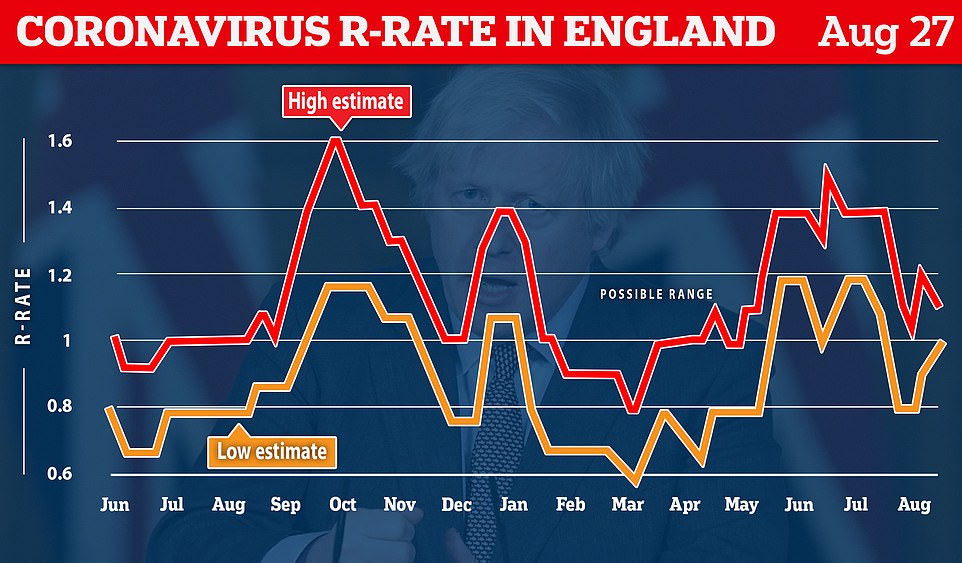 The Delta variant doubles the risk of hospital admission, a study has found.

It was already known that the Covid strain first identified in India is up to 50 per cent more transmissible than the previous dominant Alpha variant, which emerged in Kent.

But the largest study to date comparing the two now shows those infected with the Delta strain are 2.26 times more likely to be admitted to hospital.

Scientists claimed this is more proof that the same traits which make the variant spread faster also increase levels of the virus in those it infects, which results in them becoming more severely ill.

The authors of the study, led by Public Health England and Cambridge University, said their results should be used by hospitals to plan – especially in areas where the Delta variant is on the rise.

Dr Anne Presanis, a senior statistician at the university, said: ‘Our analysis highlights that in the absence of vaccination, any Delta outbreaks will impose a greater burden on healthcare than an Alpha epidemic.

‘Getting fully vaccinated is crucial for reducing an individual’s risk of symptomatic infection with Delta in the first place and, importantly, of reducing a Delta patient’s risk of severe illness and hospital admission.’

Commenting on the results, Dr Zania Stamataki, a viral immunologist at Birmingham University, said: ‘Taken together with previous studies showing that Delta is 50 per cent more infectious than Alpha, evidence mounts that we are dealing with a very dangerous variant.’

Some 74 per cent of the participants in the study – which was published in the journal The Lancet Infectious Diseases – were unvaccinated.

But among the vaccinated – the vast majority of whom had only had one dose – those infected with the Delta variant may have had almost twice the risk of hospitalisation compared with those who had the Alpha variant.

But this figure is uncertain because there were too few vaccinated patients to provide a precise estimate.

Dr Tildsley told Times Radio: ‘A younger person, if they get Covid, most of those individuals are very unlikely to develop severe symptoms.

‘But of course, we do need to remember that the younger you are, you’re not just taking the vaccine for yourself, you’re taking it for potentially, indirect protection for your more elderly and more vulnerable relatives.

‘And then, of course, there’s this issue that some commentators talk about, which is the potential for long Covid and that possibly protects younger people if they’re vaccinated.

‘All of these things need to be weighed up. Because it’s children there are a lot of ethical concerns around that.

‘So this is why it’s taken a little bit of time for JCVI to make that recommendation that the Government can then make a decision on.’

It came as experts warned the Government to plan for a surge in infections at the end of September, following the return of children from the summer holidays. Their fears were detailed in a document from the Scientific Pandemic Influenza Group on Modelling, Operational sub-group (SPI-M-O).

Its advisers said it was highly likely there would be an exponential increase in infections among school-aged children after classes returned.

And they noted that measures in place before the new term, such as bubbles and stricter rules on isolating, would no longer apply.

Mr Javid said it was important for the NHS and schools to be prepared.

He said offering all teenagers a coronavirus jab will ‘solidify our wall of protection’ against the disease in a move that will pile pressure on the JCVI to approve the move.

Writing in The Times, Mr Javid said that with the rise of the Delta variant, ‘the more the population is protected by a vaccine, the more protection society as a whole will have from Covid-19’.

The Department of Health stressed parental consent will be sought before vaccinating children, although it is unclear if children can overrule their parents.

It also emerged last night that secondary school and college pupils will need to wear face masks in communal areas outside of their classrooms in areas of the south-west of England, as extra support was pledged in response to a rise in coronavirus cases.

The Department of Health said that from Friday, Cornwall, the Isles of Scilly, Devon, Plymouth and Torbay local authority areas will get help to increase vaccine and testing uptake, and deliver public health messaging.

The vaccine is available for those aged 16 and over or for 12 to 15-year-olds who are most at risk from Covid. The Joint Committee on Vaccination and Immunisation (JCVI) has yet to advise lowering the age due to concerns the Pfizer jab may be linked to a rare form of heart inflammation.

But other scientists have accused the panel of dithering and called for children to be jabbed immediately.

Schools and colleges in England are being encouraged to maintain increased hygiene and ventilation from September, but year group ‘bubbles’ and face-covering requirements have been removed.

Unions have called for more action to ensure schools are kept as safe as possible.

Kevin Courtney, joint general secretary of the National Education Union, said current safety requirements were ‘not sufficient’ to prevent a rise in cases.

He added: ‘To prevent a sharp rise in cases, the watchwords must be ventilation, air filtration, masks, vaccines and vigilance.’ 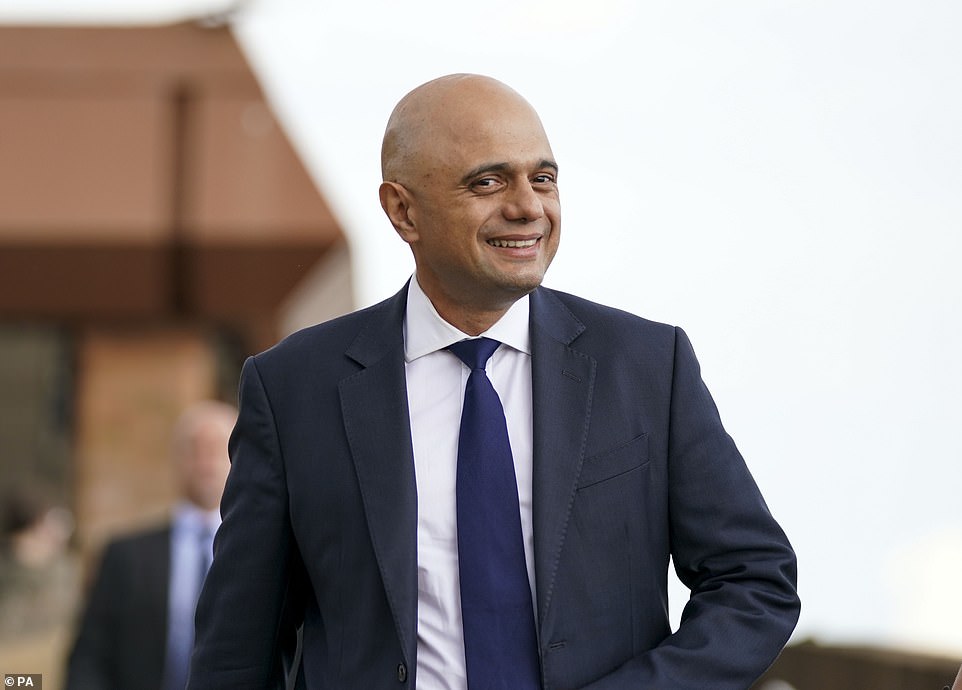 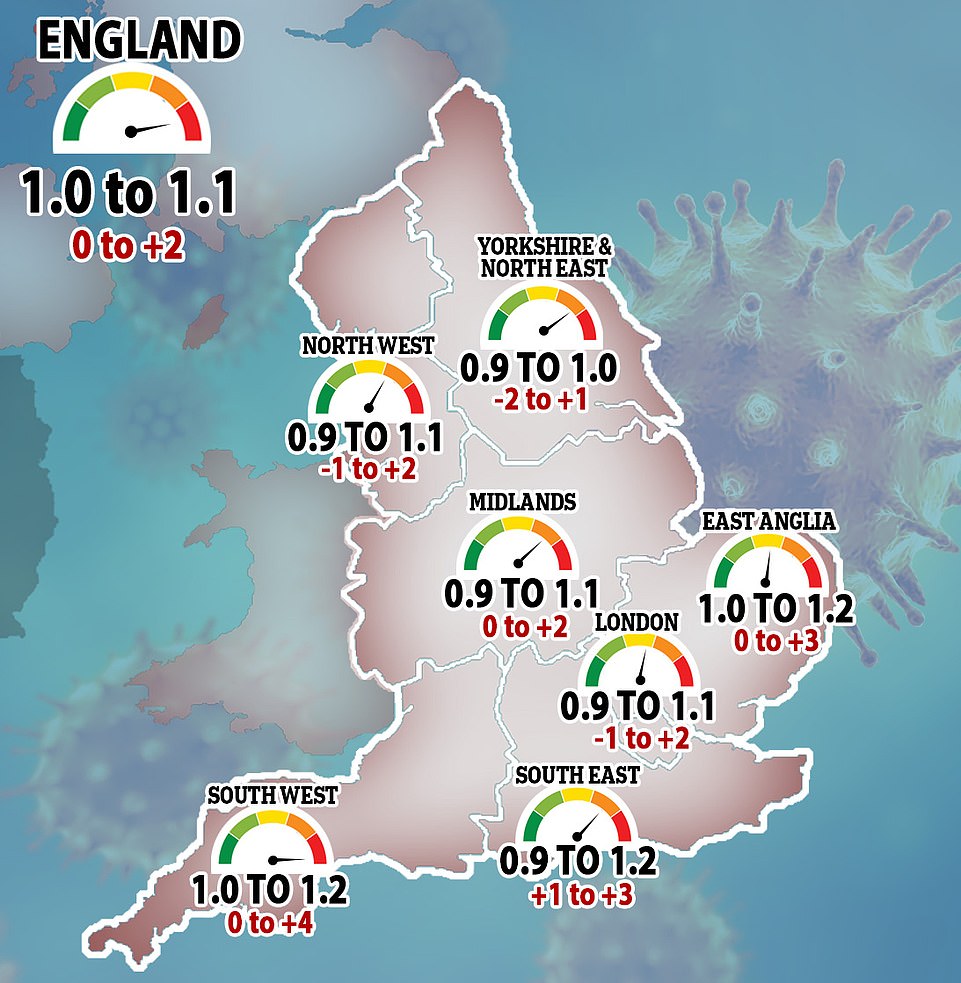 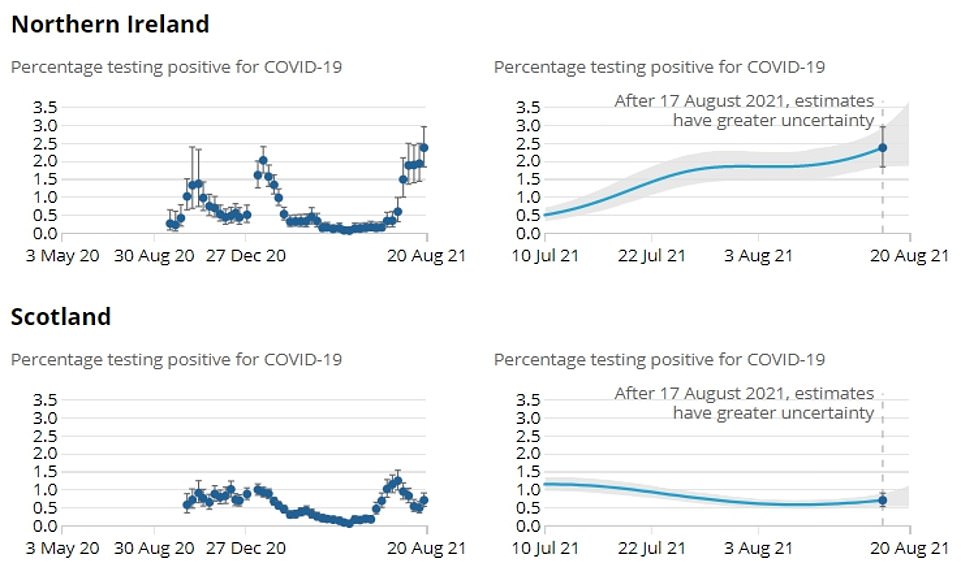 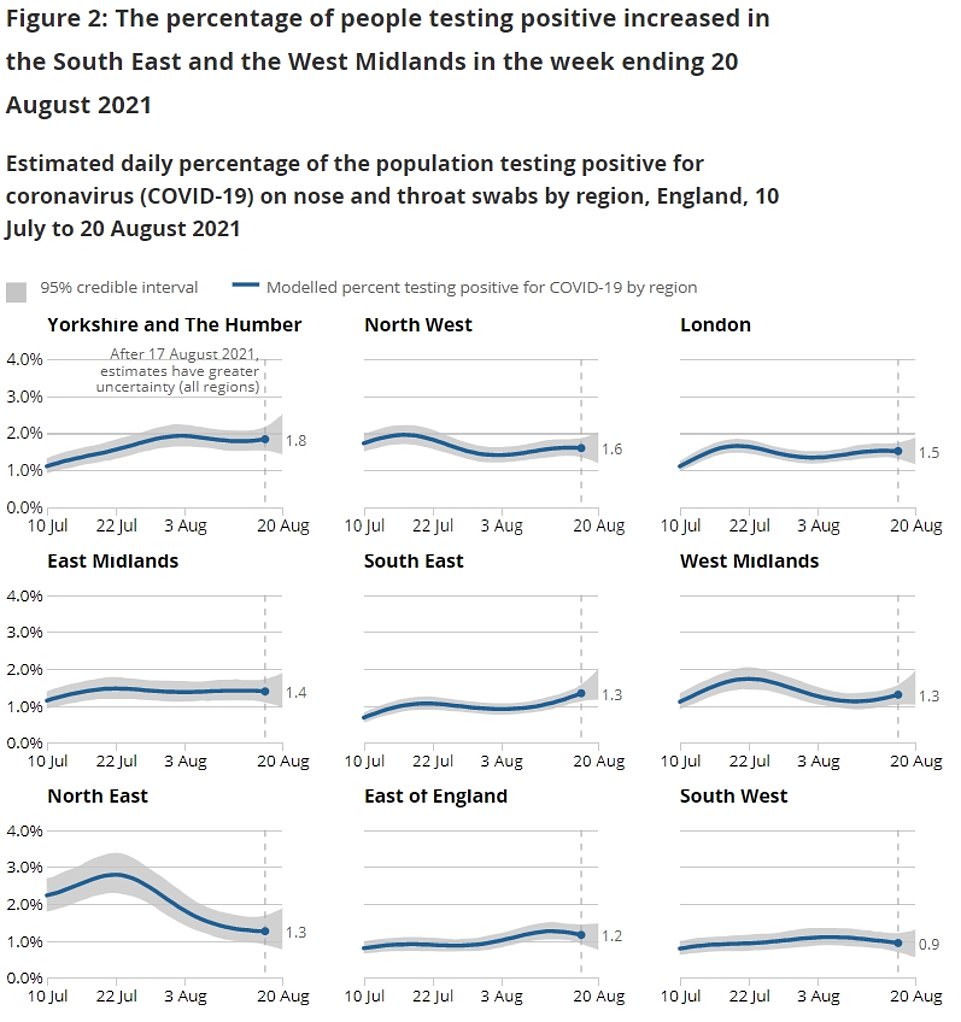 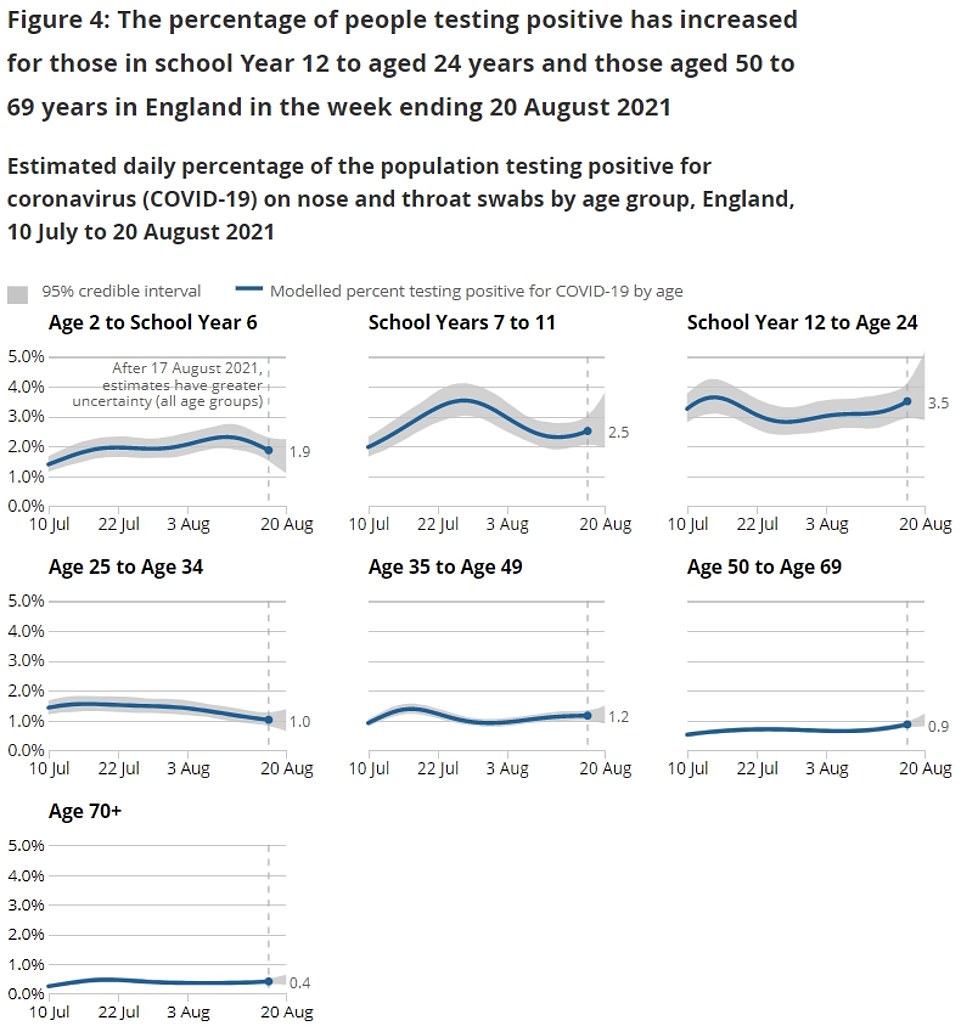 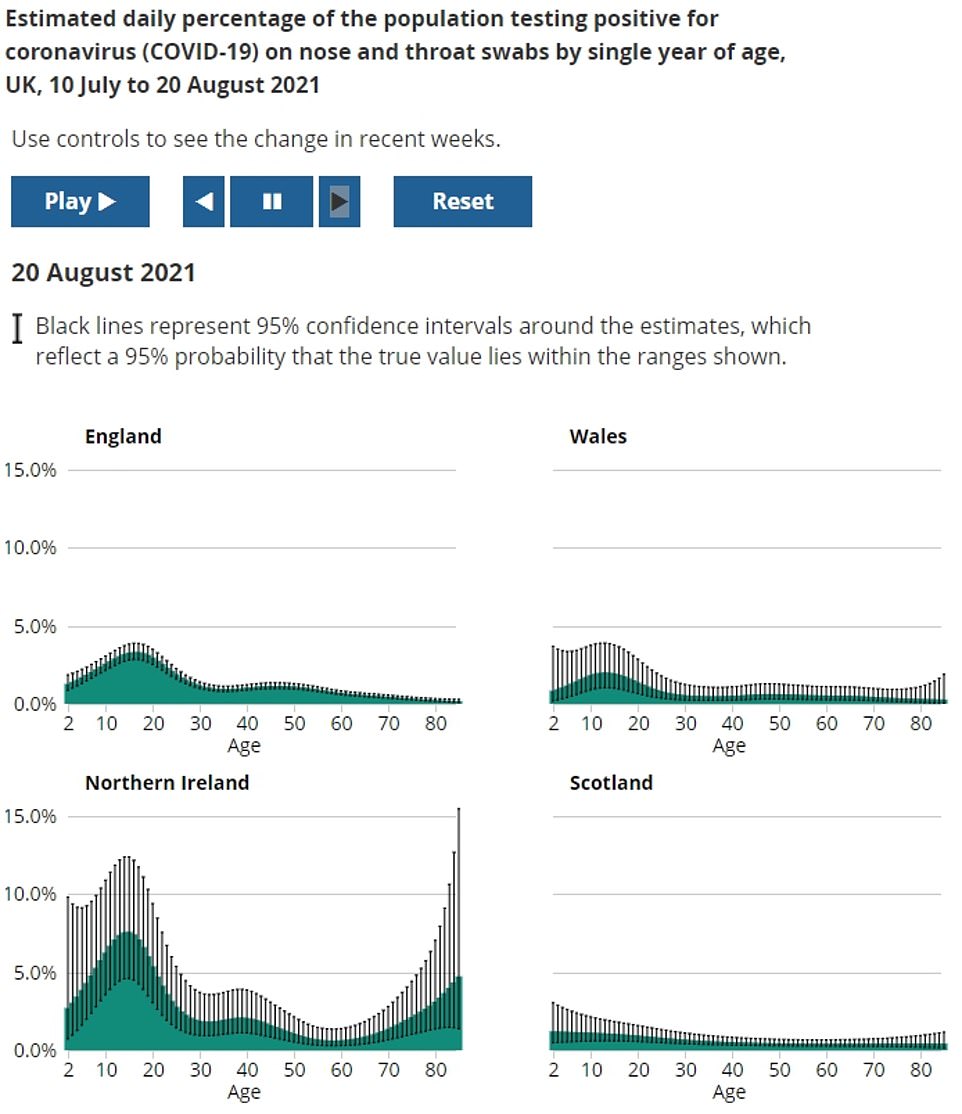 The Government yesterday reported a further 100 people had died within 28 days of testing positive for Covid, and there have been a further 38,046 cases.

Schools and colleges in England are being encouraged to maintain increased hygiene and ventilation from September, but year group ‘bubbles’ and face-covering requirements have been removed.

Unions have called for more action to ensure schools are kept as safe as possible and education is not disrupted further.

Kevin Courtney, joint general secretary of the National Education Union, said current safety requirements were ‘not sufficient’ to prevent a rise in cases.

He added: ‘To prevent a sharp rise in cases, the watchwords must be ventilation, air filtration, masks, vaccines and vigilance.’

WHAT ARE THE PROS AND CONS OF VACCINATING CHILDREN?

The main argument in favour of vaccinating children is in order to prevent them keeping the virus in circulation long enough for it to transmit back to adults.

Experts fear that unvaccinated children returning to classrooms in September could lead to a boom in cases among people in the age group, just as immunity from jabs dished out to older generations earlier in the year begins to wane.

This could trigger another wave of the virus if left unchecked, with infection levels triggering more hospitalisations and deaths than seen during the summer.

While the risk of serious infection from Covid remains low in most children, scientists are still unsure of the long-term effects the virus may have on them.

Concerns have been raised in particular about the incidence of long Covid — the little understood condition when symptoms persist for many more weeks than normal — in youngsters.

A study released last night by King’s College London showed fewer than two per cent of children who develop Covid symptoms continue to suffer with them for more than eight weeks.

Extremely rare incidences of a rare heart condition have been linked to the Pfizer vaccine in youngsters.

Data from the Centers for Disease Control and Protection (CDC) in the US — where 9million 12- to 17-year-olds have already been vaccinated — shows there is around a one in 14,500 to 18,000 chance of boys in the age group developing myocarditis after having their second vaccine dose.

Britain’s drug regulator the MHRA lists the rare heart condition as a very rare side-effect of the Pfizer and Moderna vaccines.

They said: ‘There have been very rare reports of myocarditis and pericarditis (the medical term for the condition) occurring after vaccination. These are typically mild cases and individuals tend to recover within a short time following standard treatment and rest.’

More than four times as many hospitalisations were prevented as there were cases of myocarditis caused by the vaccine in 12- to 17-year-olds, the health body’s data show.

Jabs should be given to other countries

Experts have also claimed it would be better to donate jabs intended for teenagers in the UK to other countries where huge swathes of the vulnerable population remain unvaccinated.

Not only would this be a moral move but it is in the UK’s own interest because the virus will remain a threat to Britain as long as it is rampant anywhere in the world.

Most countries across the globe are lagging significantly behind the UK in terms of their vaccine rollout, with countries in Africa, Southeast Asia and South America remaining particularly vulnerable.

Jabs could be better used vaccinating older people in those countries, and thus preventing the virus from continuing to circulate globally and mutate further, than the marginal gains to transmission Britain would see if children are vaccinated, experts argue.

Professor David Livermore, from the University of East Anglia, has said: ‘Limited vaccine supplies would be far better used in countries and regions with large vulnerable elderly populations who presently remain unvaccinated — Australia, much of South East Asia and Latin America, as well as Africa.’

The Government yesterday reported a further 100 people had died within 28 days of testing positive for Covid, and there have been a further 38,046 cases.