How did the Met fail to stop the sex monster within its ranks? Scotland Yard missed nine chances to catch rapist cop David Carrick as he attacked 12 women over 17 years – and failed to suspend him when he was arrested for rape

The 48-year-old Met firearms officer faced no criminal sanctions or misconduct findings over the incidents between 2000 and 2021 – eight of which involved alleged women victims – leaving him free to attack 12 women in a 17-year campaign of torture and abuse.

Carrick passed vetting procedures to join the Met in 2001 despite allegations of malicious communications and burglary against an ex-partner the previous year. He was accused of harassment and assault against a former partner while still in his probationary period in 2002 but the matter was not referred to the Directorate of Professional Standards.

Today, campaigners said the Met’s ‘horrendous’ failings were evidence of an ‘institution in crisis’, while Downing Street admitted public trust in the police had been ‘shattered’. 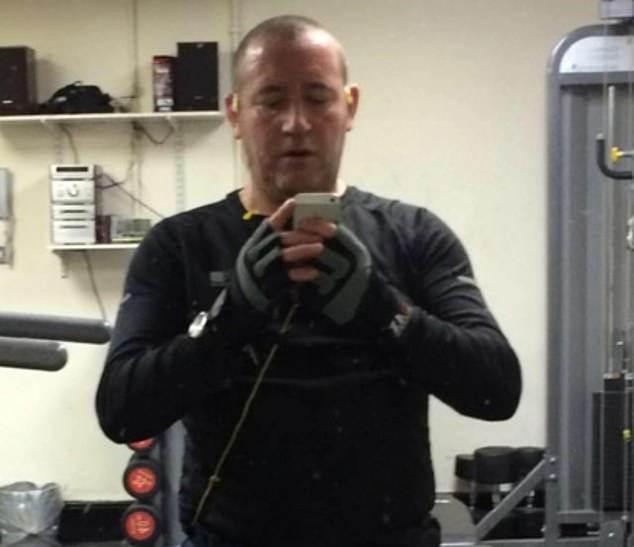 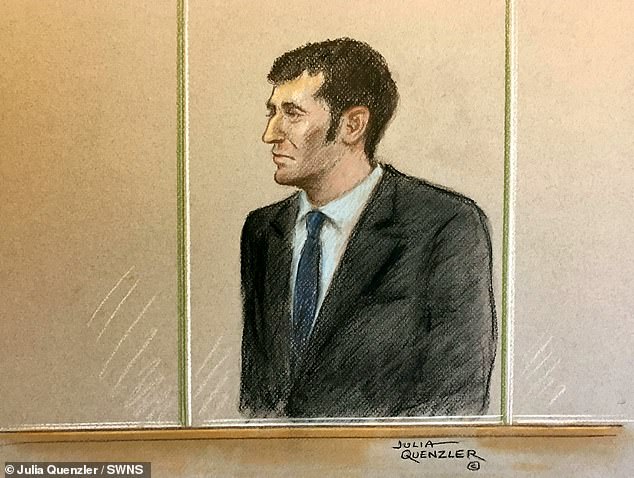 Carrick appearing in Southwark Crown Court today, where he pleaded guilty to 24 counts of rape

He was the subject of five complaints from members of the public between 2002 and 2008, including rudeness, incivility and the use of force, with two of the incidents dealt with by management action.

Carrick passed checks to become a firearms officer in 2009 despite at least one further domestic incident involving the Met in 2004 and was re-vetted in 2017 – the same year he was spoken to by Thames Valley Police officers after being thrown out of a Reading nightclub while drunk.

By then he had also been the suspect in a 2016 Hampshire Police investigation following an allegation of harassment but he was not arrested.

The Pc was given ‘words of advice’ after being accused of grabbing a woman by the neck during a domestic incident investigated by Hertfordshire Constabulary in 2019 over informing his chain of command about off-duty incidents but found to have no misconduct case to answer.

He was placed on restricted duties after he was arrested on suspicion of rape in July 2021 but the restrictions were lifted after the criminal probe was dropped in September.

Carrick has now admitted two charges of rape, two of sexual assault and one count of controlling and coercive behaviour in relation to the woman.

However, Carrick never returned to full duties because he was arrested over another rape allegation in October after another woman came forward.

The investigation prompted another dozen women to make allegations against Carrick, many of whom said they had been scared to speak out because of his position.

No police colleagues ever complained about Carrick’s behaviour but following his arrest some officers confirmed he was known as ‘the bastard’ or ‘Bastard Dave’ because he was ‘mean and cruel’. 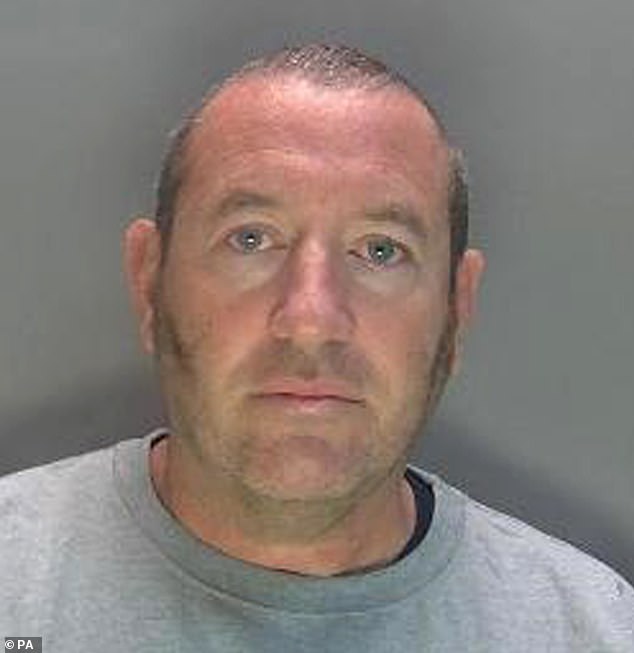 In total Carrick, from Stevenage, Hertfordshire, has pleaded guilty to 49 offences, relating to 12 women between 2003 and 2020

Assistant Commissioner Barbara Gray, the Met’s lead for professionalism, said Carrick’s offending was ‘unprecedented in policing’ and apologised to his victims for failing to remove him from the force.

‘We should have spotted his pattern of abusive behaviour and because we didn’t, we missed opportunities to remove him from the organisation,’ she said.

‘We are truly sorry that being able to continue to use his role as a police officer may have prolonged the suffering of his victims.’

More than 1,600 claims of sexual assault and domestic violence against Met officers and staff under review

More than 1,600 cases of alleged sexual offences or domestic violence involving Metropolitan Police officers and staff are being reviewed in the wake of the David Carrick case.

The force said that accusations ranging from arguments to the most serious sexual crimes from the last 10 years are being checked to make sure that the appropriate decisions were made.

The force said that most officers whose cases are reviewed will remain on duty without being subject to restrictions while the inquiries are carried out.

A spokesman said: ‘In the event that information was to emerge from a review that raised concerns then an officer or member of staff’s status would be reconsidered without delay.

‘All new allegations against officers and staff are subject to robust risk management including restrictions and suspension where appropriate.’

The Met has already faced heavy criticism of its internal disciplinary procedures with Baroness Casey finding the system is racist and misogynist, and that allegations of sexual misconduct or discrimination are less likely to result in a case to answer than other claims.

The peer said that some officers and staff were getting away with misconduct and even criminal behaviour.

Commissioner Sir Mark Rowley has said he believes hundreds of corrupt officers are serving within the force and should be sacked.

National concerns have also been raised about how police forces deal with allegations of domestic abuse made against officers and staff.

Watchdogs found that there were systemic weaknesses in the way that the claims are dealt with following a so-called super-complaint, a system used to raise wider issues in policing, made by women’s justice campaigners.

She added: ‘What we are responsible for, and I truly apologise for, is that we have failed to identify the abusive behaviours that he has conducted over a long, long period of time.

‘We are truly sorry that he was not identified earlier, that victims felt that they couldn’t come forward earlier, and we have to bear that responsibility that he continued then to use his position as a police officer to exploit and manipulate and carry out his predatory behaviours.’

The Met said the force is confident Carrick would not have passed vetting procures to join the force today and said in 2009, when he joined what is now the Parliamentary and Diplomatic Protection Command, previous incidents resulting in criminal or misconduct action were not necessarily taken into consideration.

The force admitted sufficient intelligence checks were not carried out when he was re-vetted in 2017 and that Carrick was not vetted again after he was arrested for rape in July 2021.

The only time there is evidence that a full review was carried out was when he was arrested in October 2021.

The case is the latest in a string of damaging scandals for the Met, including offensive messages exchanged by a team at Charing Cross and the strip-search of a teenage girl at school while she was menstruating.

Dame Cressida Dick stepped down as commissioner last year after facing criticism over the controversies and the case will be seen as a major setback for her successor Sir Mark Rowley’s attempts to clean up the reputation of the force.

A review has identified around 1,000 current officers and staff who have previously been the subject of allegations of sexual offences, including rape or domestic abuse, which could not be proven or subject to misconduct proceedings.

Ms Gray said: ‘It’s a devastating impact that he has had on other women and girls across London, because we’re working so hard to gain their trust and our colleagues are devastated when they are working 24/7 seeking to protect victims at all times.’

Of the review, a Met spokesman said: ‘As part of our continuing commitment to reform and delivering the highest level of professional standards, we are reviewing the details of any allegations of domestic abuse or sexual offences from the past 10 years where a Met officer or member of staff was involved and the allegation/resulting case has been finalised.

‘This will include a very wide range of allegations from verbal arguments and altercations in a domestic or family setting to the most serious sexual offences. It could include cases where no further action was taken and where no criminal allegations were made.’

‘Although none of these offences took place on the Parliamentary Estate, I know how troubling and unwelcome it is that Carrick was allowed to work among us,’ he said.

Sir Lindsay said that he was ‘seeking clear reassurance from the Metropolitan Police that their system failures which enabled Carrick to work in Parliament will never be repeated’.

Who are Britain’s worst rapists?

Met firearms officer David Carrick was today revealed as one of the UK’s most prolific rapists after admitting to 24 rapes against 12 women.

Churchgoing PhD student Reynhard Sinaga, 36, (right) preyed on at least 195 young men and police admit the true figure may be higher. Jailing him for 30 years, a judge called him a ‘monster’.

Sinaga incapacitated victims with the date rape drug GHB before filming his attacks.

Sinaga, who mostly targeted heterosexual students in Manchester, was convicted of 159 attacks, including 136 rapes, eight attempted rapes and 15 indecent assaults against 48 victims.

Four trials were held over 18 months. Footage was found of him assaulting up to 195 different men, 70 of whom have not been traced.

Joseph McCann (right) was convicted for a horrific series of rapes and kidnappings against 11 women and children.

The 37-year-old, who raped eight people in total, snatched some victims off the street, forcing them into his car at knifepoint.

McCann was freed automatically from jail halfway through a three-year sentence. The decision to release him should instead have been made after consideration by the Parole Board.

This was because he was on lifelong licence for an aggravated burglary in 2007. However this earlier offence was not factored into his three-year sentence, with the result that parole officers were not informed about his case.

The 47-year-old had a fetish for sex with the unconscious so drugged and raped his victims to ‘satisfy his lust’ after meeting them on the dating app.

Between June 2014 and September 2015 he abused and killed them using date rape drugs before dumping their bodies in the street or his local graveyard in Barking, east London.