Washington: NASA’s former most senior female executive has accused the space agency of having a “male-dominated” culture, claiming she was subjected to physical threats, and called an “ugly whore” and a “motherf—— b—-” .

In a memoir published on Tuesday, Lori Garver, deputy administrator 2009 to 2013, also lambasted the agency for being initially reluctant to involve private firms such as SpaceX.

The former number 2 at NASA criticised the cost of the Space Launch System (SLS) rocket, which the agency is developing to go back to the moon, and called its pledge to send a woman to the lunar surface a “marketing gimmick”. 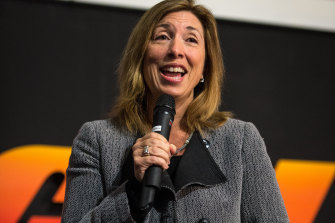 In Escaping Gravity: My Quest to Transform NASA and Launch a New Space Age, Garver, 61, wrote: “Many who disagreed with my views attacked me with vulgar, gendered language, depredation, and physical threats.

“I’ve been told I need to get laid, and asked if I’m on my period or going through menopause.”

Garver, who joined NASA in the 1990s, described the agency as “reminiscent of the forts boys built and filled with cigarettes and girlie magazines”.

She wrote that, when she was a junior official, a more senior NASA figure called her into his office on her birthday and suggested giving her a “birthday spanking”.

Other women had also encountered “unwanted sexual advances and harassing behaviour,” she wrote.

Garver said she had been attacked by politicians from both parties, the aerospace industry, and “hero astronauts” as she tried to promote private enterprise, which she believed would lead to innovation and reduce costs. After SpaceX boss Elon Musk said that he could help “fix” NASA, a politician involved with the space agency “shouted at me to ‘get your boy Elon in line’,” she wrote.

She said the cost of the SLS was ballooning due to entrenched interests. “The Biden administration is now the third administration to ignore such realities, so the absurdity continues.”

Politico, which also had an advance copy of the book, reported that she also called out aerospace giants Boeing and Lockheed Martin and their suppliers for greedily pushing NASA leaders and Congress to initiate the $US23 billion ($33 billion) SLS rocket and Orion capsule which she fears will bankrupt the space program. It said she accused legislators from both parties of putting their own political interests above NASA’s.

NASA has so far not commented on the book.

Garver praised Musk, saying she would not have been able to make progress at NASA without him.

In the book she also praised Jeff Bezos, and called Sir Richard Branson the “most naturally charismatic of the billionaire space barons”.