Soldiers on the Poland-Belarus border have stunned locals after popping up on the dating app Tinder amid the ongoing migrant crisis.

Women in the Belarusian town of Grodno, which is close to the inflammatory border checkpoint, spotted a deluge of hopeful soldiers looking for love from Poland, Lithuania and even Belarus.

One profile on the app is from a 25-year-old Polish soldier called Michal, whose photo shows him pointing a gun at the camera.

He cheekily asks: ‘Are you staring at my equipment?’

He adds: ‘I set up a profile on here just to see how this app works, I doubt anyone will swipe right, but if you do, I invite you to a conversation.’

It comes as troops have been bolstered on both sides of the border in recent days, where around 4,000 refugees have gathered after being ferried there by forces loyal to Belarusian tyrant Alexander Lukashenko.

But it seems the ongoing chaos hasn’t stopped soldiers in their quests for romance. 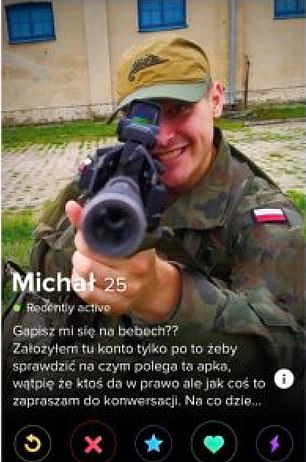 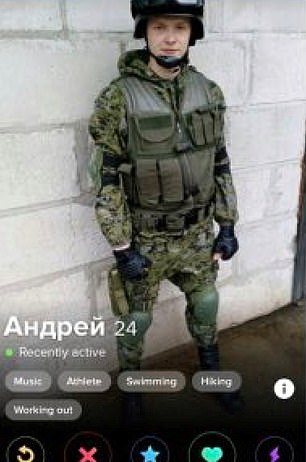 Women in the Belarusian town of Grodno, which is close to the inflammatory migrant border checkpoint, spotted a deluge of hopeful soldiers looking for love on Tinder. One profile on the dating app is from a 20-year-old Polish soldier called Michal, whose photo shows him pointing a gun at the camera (left). Another profile showed a Belarusian soldier who says he likes ‘music, athletics, swimming, hiking and working out’ (right)

Another Tinder profile from Polish soldier Artur, 24, who is seen standing in a lineup parade wearing a face mask and holding an automatic rifle, says he likes to be ‘active’ and ‘very often goes cycling to interesting places to take photos’.

Yet another called ‘Aleks 20’ lists his interests as ‘travel, photography, cooking, cat lover and fishing.’

Other profiles show a 26-year-old Lithuanian soldier called Mantas and a Belarusian soldier who says he likes ‘music, athletics, swimming, hiking and working out.’

A Belarusian woman named Anja shared screenshots of the profiles on Twitter after receiving them from a friend who lives in the border town.

Anja wrote: ‘This is what Tinder looks like now, if you’re a girl in Grodno. It’s not funny.’

She has since been flooded with support from local women, with one called Lena adding: ‘Bang, bang, bang… but of the wrong sort.’ 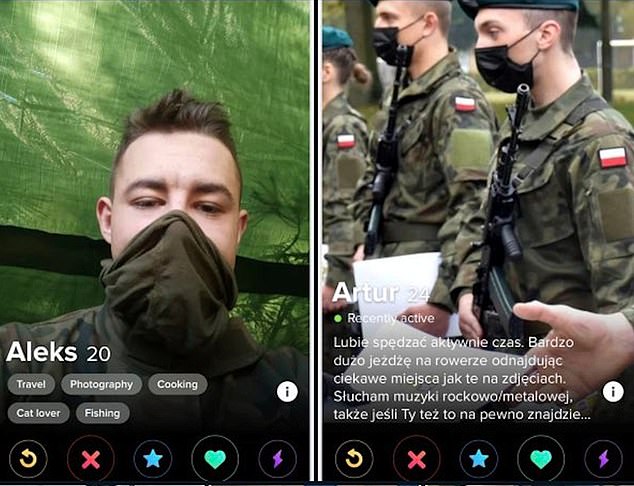 Another Tinder profile from Polish soldier Artur, 24, who is seen standing in a lineup parade wearing a face mask and holding an automatic rifle (pictured right), says he likes to be ‘active’ and ‘very often goes cycling to interesting places to take photos’. Yet another called ‘Aleks 20’ lists his interests as ‘travel, photography, cooking, cat lover and fishing’ (pictured left)

But one Twitter user calling themselves Tolga Ra said: ‘What would you like to see on Tinder?… These guys are just showing their real lives.

‘And they don’t have one kilo of make up on.’

In reply, Anja, who originally posted the Tinder profiles, said: ‘I am not judging.

‘These screenshots are not even mine, they are from my friend who lives there.

‘It is just quite an unusual situation for Belarus.’

It comes as Mail Online revealed that Polish border guards were forced to fight off an attack by hundreds of migrants at the frontier with Belarus with water cannon and flash grenades this morning, in the latest escalation of tensions on the EU’s eastern front.

The Warsaw authorities issued orders to douse a group who were throwing stones, smoke bombs and pieces of metal fence at their soldiers despite the near-freezing conditions.

One police officer was rushed to hospital with a suspected fractured skull after being hit in the face.

The thousands of desperate refugees who have gathered at the border are mostly from the Middle East and North Africa.

At least 11 migrants have died on both sides since the influx started in the summer. 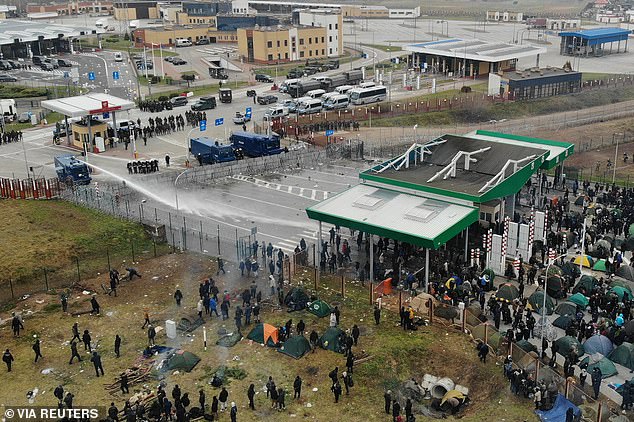 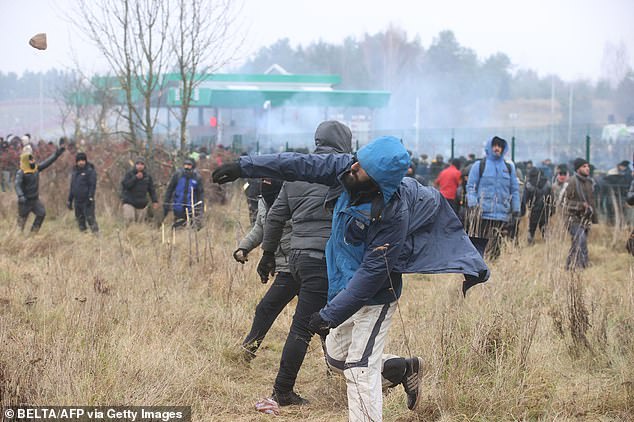 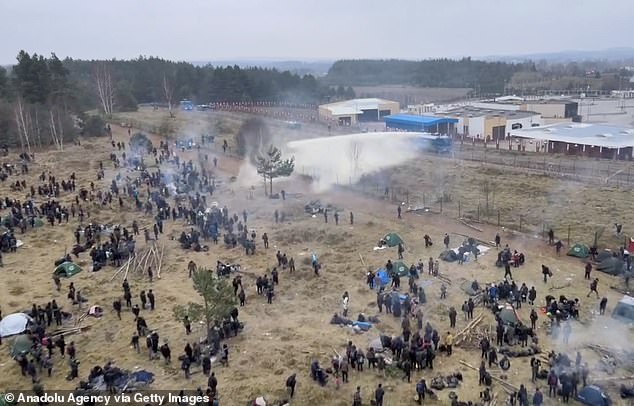 One of them, a 19-year-old Syrian from the war-torn city of Homs, was laid to rest on Monday.

Lukashenko’s men appeared to be forcing the migrants through gaps in the fence in video which emerged today, while other footage showed a Belarusian soldier cutting a hole in the barbed wire.

A fleet of specialist water cannon vehicles has been drafted to the border crossing between Kuznica and Bruzgi where thousands of migrants have gathered since last week in the hopes of reaching the EU.

Newly released footage shows Polish police firing a water cannon across the border fence at the migrants on the Belarus side border.

A spokesman for the Polish Border Guard told MailOnline: ‘Migrants at the border crossing at Bruzgi on the Belarusian side have been attacking the Polish border service for about an hour.

‘Water cannons were used against these aggressive foreigners.

‘The migrants were throwing stones and objects that emit smoke at the Polish Border Service. 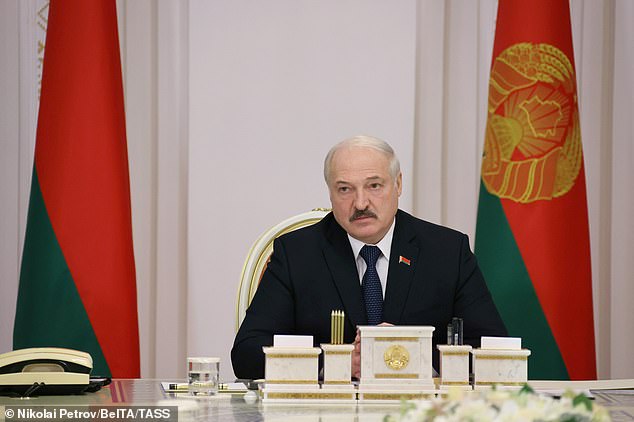 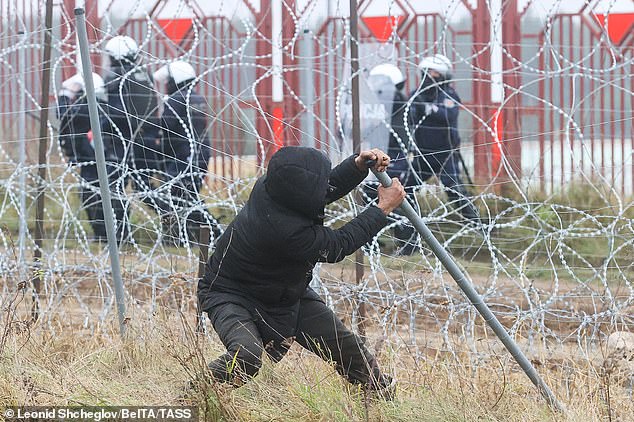 ‘A loud bang was heard and a log of wood was thrown through the barbed wire fence by aggressive foreigners.’

The spokesman added: ‘Immigrants camped at the border crossing in Bruzgi have been behaving aggressively, throwing stones and various objects at the Polish Border Guard.

‘In order to prevent illegal border crossing, water cannons were used against the aggressive foreigners.’

‘The behaviour of the Polish side is absolutely unacceptable,’ he told a press conference in Moscow, citing ‘tear gas and a water cannon and shots fired above the heads of migrants towards the direction of Belarus’.