Washington: Ayatollah Ruhollah Khomeini’s fatwa against the author Salman Rushdie in 1989 made clear that the greatest threat to artists, intellectuals and journalists in the modern era comes from authoritarian states.

In recent years, the latter have increasingly outsourced violence to murky non-state actors. This grim trend has been underscored by assassinations of dissenting writers in Russia, India, Pakistan, the Philippines and many other countries. 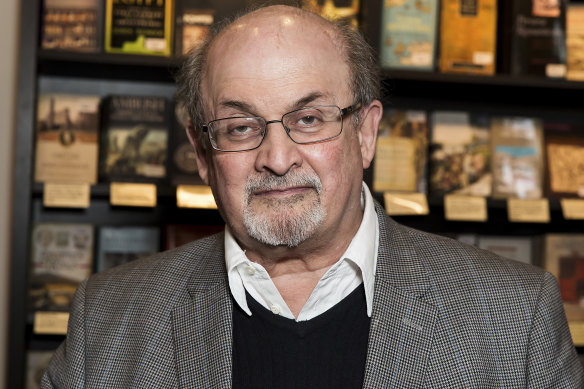 Yet many in the West have been quick to turn the attack on Rushdie by a Hezbollah groupie from New Jersey into “fodder for highly-politicised polemics,” as the New York Times put it. The unspeakable violence against Rushdie has become another “flash point in the roiling 21st-century debate over free speech, liberal values and ‘cancel culture.’”

Thus, the Financial Times editorialises that free speech “needs to be defended with even more vehemence in the aftermath of the attack on Rushdie.” Moreover, “freedom of speech in a liberal society must include the prerogative to say upsetting or offensive things.”

Few people will dispute this ancient saw of liberalism.

Yet we ought also to consider the complex new fact that liberal society is endangered by many of those vehemently defending free speech and the prerogative to say offensive things. The same week that Rushdie was attacked, Alex Jones, the stupendously wealthy talk-show host and founder of Free Speech Systems LLC, was ordered by a court to pay $US45 million to bereaved parents profoundly distressed by his repeatedly broadcast lie that the 2012 massacre of children at Sandy Hook Elementary school never happened. 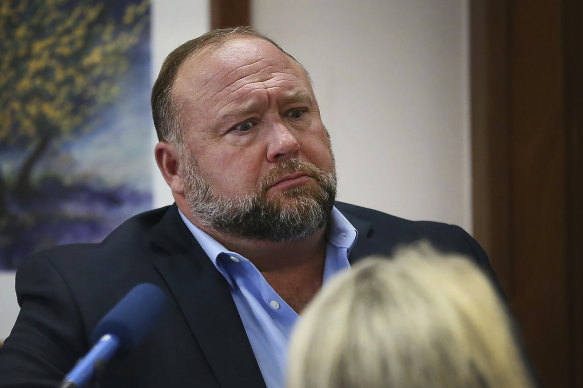 Alex Jones has portrayed the Sandy Hook lawsuit as an attack on his First Amendment rights.Credit:AP

Jones is only one of the many entrepreneurs worldwide who have cold-bloodedly monetised the right to offend – and thereby helped poison politics and society on several continents. They prosper because liberal society’s appetite for people saying offensive things has never been greater.

Certainly, their ubiquity and success confirm that there has never been, for better and for worse, so much free speech, especially speech that is deliberately offensive.

Anyone with a smartphone today is a potential news broadcaster, political analyst, historian, literary critic and conspiracy theorist across a range of digital platforms. Bizarrely, however, a section of the mainstream Western intelligentsia insists that, as the much-discussed Harper’s Letter, publised by the US magazine, in 2020 put it, “free expression of information and ideas is daily becoming more constrained”.

This unproven and unprovable notion is now back in circulation after the attack on Rushdie. Thus, a sentence after deploring the Saudi government’s grisly killing of the journalist Jamal Khashoggi, the Financial Times invokes the Harper’s Letter, asserting that, “less brutal, but more insidious, perhaps, has been the effect of ‘cancel culture’ on freedom of speech”.

The Western signatories of the Harper’s Letter may have been occasionally stung in their Twitter skirmishes. But virtual lynch mobs, however more insidious than bonesaw-wielding Saudi goons, have not managed to silence any of them. In fact, some thinkers routinely “cancelled” on social media enjoy flourishing careers; they confirm how easy it is today to secure a high income and reputation in the West by claiming righteous victimhood.

Lacking concrete evidence for widespread stifling of free speech, culture warriors have become purveyors of fearful speculation. In its report on the “roiling debate” on free speech last week, the New York Times quotes a Twitter commentator as saying that “sensitivity readers” at publishing houses today would stymie the publication of The Satanic Verses.

It might have been useful to ask Rushdie’s publishers about this. Such conjecture could also have been balanced by noting that much of what could not be published for centuries due to mainstreamed racism, misogyny and homophobia is now finally getting into print.

The dominant beliefs of a society determine what can be published in it at any given time. Those beliefs, policed by a political and cultural establishment, are inevitably challenged when people previously excluded from the public sphere enter it with new media technologies. The outcome of such struggles for narrative authority is always ambiguous: More free speech about some things and less about others.

The question “who can say what” cannot be separated from ongoing political contests for power and demographic and technological shifts. This is why the debate about free speech is endlessly roiling and can never be resolved to the satisfaction of all debaters.

Members of an insecure cultural establishment in the West have taken to fiercely imagining a golden age when speech was truly free, unpunished by “cancel culture.” An ageing commentariat is especially prone to see civilisational decay in its own loss of vigor and influence.

Still, the dread of slowly becoming irrelevant is not as terrible a fate as the actual assassination, torture and rape suffered by writers and journalists in Asia, Africa and Latin America, or the appallingly real violence inflicted on Rushdie. It is more imperative than ever to ignore the narcissistic declinism of a long-privileged Western minority, and to correctly identify the truly malign, resourceful and formidable persecutors of art and thought worldwide.