Sun worshippers today flocked to Britain’s beaches as temperatures soared across much of the country – and more hot weather is expected this weekend.

Photos showed thousands of people at the beach in Lyme Regis, Dorset, where the mercury is hitting 26C (79F) today.

In London, temperatures are expected to climb to 28C (82.4) later this afternoon, whilst the mercury in most other areas will remain above 20C (68F).

Whilst showers are expected later today and during the night for northern England and parts of eastern Scotland, it will remain dry in the south.

The south will remain dry tomorrow as rain spreads across much of the rest of the country, before temperatures again hit 28C in the south.

On Sunday morning, more cloud will bring rain in the south-west of England, the Midlands and in Wales and Northern Ireland. This will bring welcome relief to farmers and growers suffering from a recent lack of rainfall.

It comes after recent scorching weather that saw temperatures reach a record 40.3C (104.5F) last Tuesday in Lincolnshire, beating the previous record set in Cambridge in 2019 of 38.7C (101.7F).

The lack of rain saw water bosses impose a hosepipe ban for Hampshire and the Isle of Wight from next Friday.

Southern Water said that whilst there was not a risk to their water supplies, the environment has to be protected during ‘one of the driest years on record for over a century’.

England has had its driest July in 111 years so far this month, the Met Office said today. 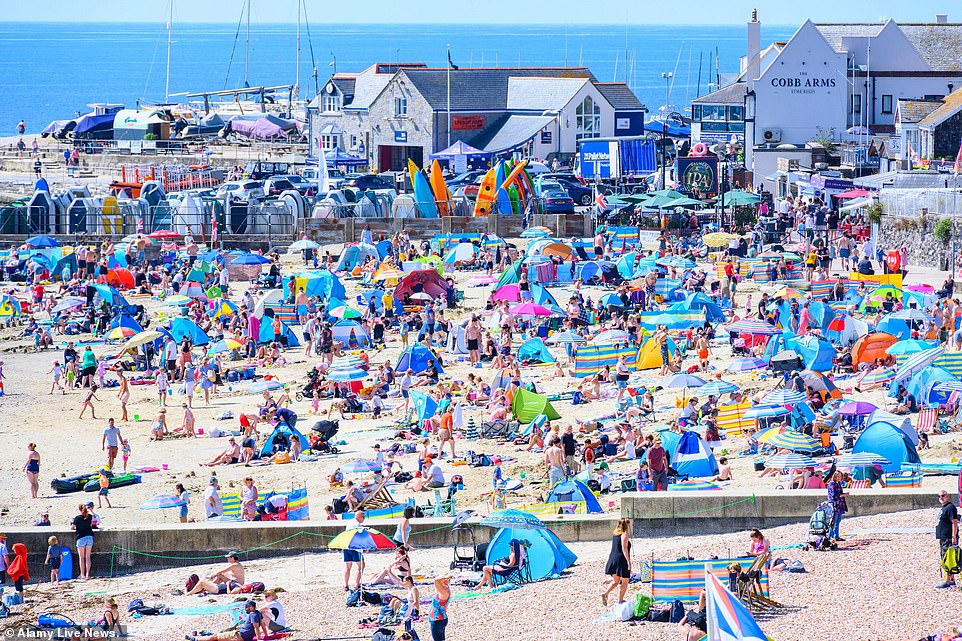 Sun worshippers today flocked to Britain’s beaches as temperatures soared across much of the country – and more hot weather is expected this weekend. Photos showed thousands of people at the beach in Lyme Regis, Dorset, where the mercury is hitting 26C (79F) today 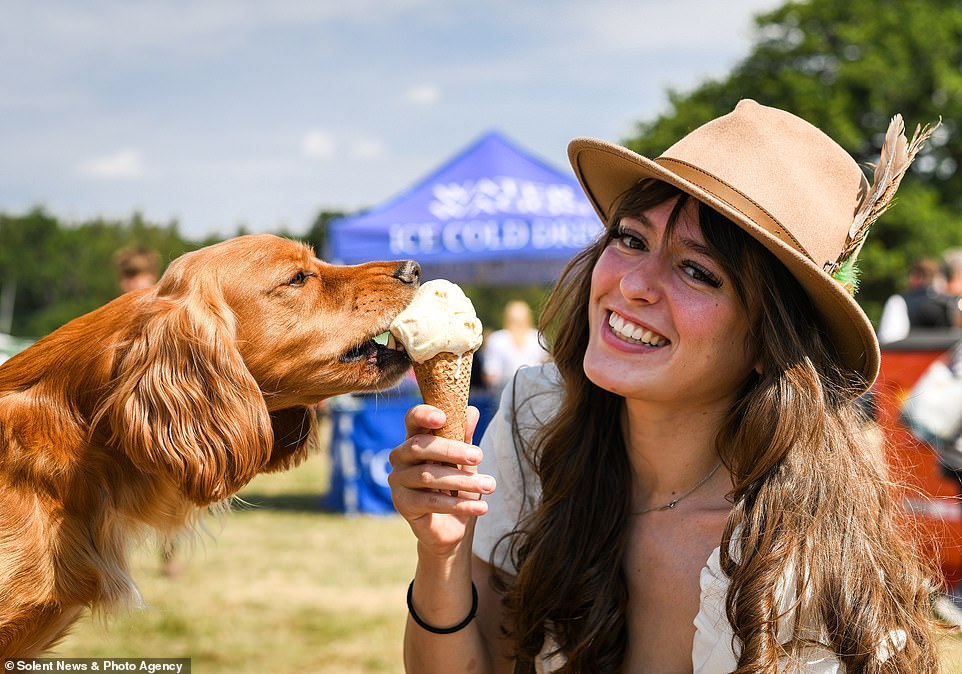 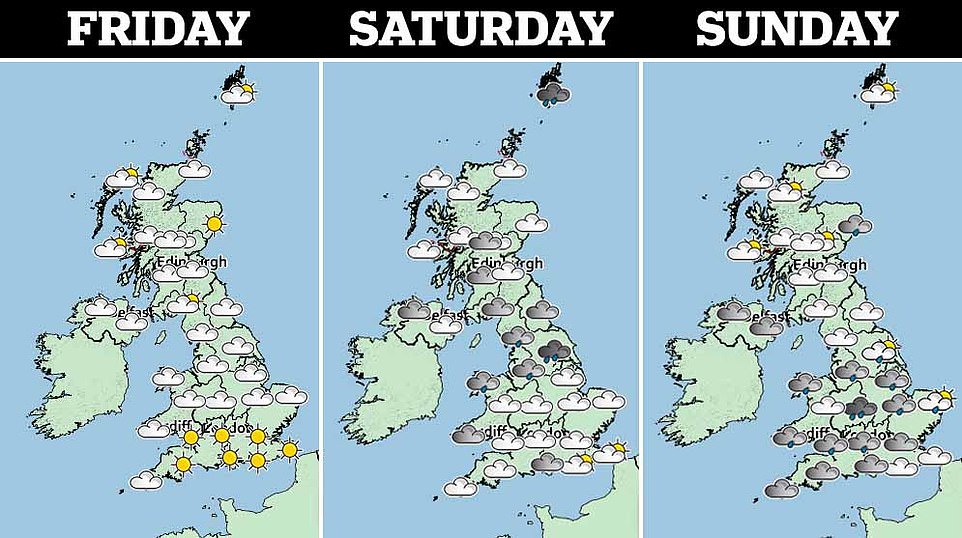 Met Office forecaster Luke Mall said: ‘So as we start the day on Saturday then, we have got quite a wet picture for large parts of the country. Bit of a disappointing start to the day. But it will improve, somewhat through the day.

‘The rain will start to ease for Scotland, we will see some brighter skies coming through. One or two showers around but you will see that rain does persist for parts of Cumbria, Lancashire and also through the north-west of Wales.

Water bosses have announced a hosepipe ban for Hampshire and the Isle of Wight next Friday after the recent heatwave scorched the UK.

Southern Water said although there was not a risk to their water supplies, the environment has to be protected during ‘one of the driest years on record for over a century’.

The UK saw its hottest day on record with temperatures soaring to 40.3C (104.5F) on 19 July, caused by a plume of hot air from north Africa and the Sahara.

This is the first time the water company have imposed a hosepipe ban since 2012.

It will mean hosepipes cannot be used to water gardens or clean cars and ornamental ponds and swimming pools must not be filled.

People are also banned from cleaning walls or windows of domestic premises, paths, patios, or other artificial outdoor surfaces using a hosepipe.

England has had its driest July in 111 years so far this month, the Met Office revealed today as the UK’s first hosepipe ban of the summer was declared following the driest six months since the landmark drought of 1976.

‘To the south, it remains dry. There will be some sunny breaks developing in that cloud, a bit more cloud though than what we have had through Friday.

‘Still, temperatures getting to 28 degrees, that is pretty warm and humid once again. Now through Saturday evening we will begin to see that rain easing.

‘But we are keeping a close eye on this next wave that is pushing its way in.’

He said heavier rain could arrive for Wales, the Midlands and also the south-west of England later on Saturday.

‘Some of these areas haven’t seen a lot of rain through July so this will be welcome rain for farmers and growers,’ he added.

‘Temperatures still on the very mild side across the south, a warm night, 17 or 18 degrees, but much colder across the west of Scotland where we could see those temperatures down to mid single figures in a few places.’

Speaking of Sunday, he said there will be a further risk of rain for many southern parts of the country.

‘Still some uncertainty as to how far that rain will get to the east so there may still not be that much rain for the south-east of England,’ he said.

‘Those temperatures here, we do see some sunshine, will still be on the warm and humid side.

‘The best of the sunshine through Sunday is likely to be for the north of the UK ,where it will feel a bit fresher with those temperatures nearer to normal.’

Figures from the Met Office today showed that there has been just 15.8mm (0.6in) of rain on average across the country.

The Met Office said that at this stage in the month – up to Tuesday – the country would have expected well over three-quarters of the month’s rain to have already fallen in an average July.

Director of risk and compliance at Southern Water, Dr Alison Hoyle, said: ‘We haven’t taken this decision lightly and we know the temporary use ban will have an impact on our customers.

‘We’re asking everyone in Hampshire and the Isle of Wight to do their bit by supporting these measures and only use the water that they need.

The company added that the temperatures have caused a drought which threatens to damage the habitats of the River Test and River Itchen.

River flows are said to be approximately 25 per cent lower than they should be for July, which is equivalent to losing more than 25 million bathtubs of water.

experts have said that human-caused climate change made the record-breaking heatwave at least 10 times more likely, but probably more as this is a ‘conservative estimate’.

The extreme temperatures were higher than climate models had predicted, suggesting the consequences of climate change for heatwaves could be even worse than previously thought.

The analysis was conducted by an international team of 21 researchers as part of the World Weather Attribution group, including experts at Imperial College London, the University of Oxford and the University of Edinburgh.

‘Even with a conservative estimate, we see a large role of climate change in the UK heatwave,’ said Mariam Zachariah at Imperial’s Grantham Institute for Climate Change.

‘Under our current climate that has been altered by greenhouse gas emissions, many people are experiencing events during their lifetime that would have been almost impossible otherwise.’

Southern Water said in a statement: ‘The extremely hot weather and reduced rainfall alongside increased demand has left the water levels significantly lower.

‘We’re asking our customers to help protect our rivers and the habitats that live there by cutting back their water use. We believe a Temporary Use Ban is a responsible and vital step to reducing the amount of water being taken from the Rivers Test and Itchen.’

The hosepipe ban comes as the National Fire Chiefs Council warned UK cities earlier this week that they need to prepare for wildfires after dozens of ‘unprecedented’ blazes broke out during last week’s extreme 40C (104F) temperatures.

The BBC’s weather team said that forecasters have been the target of ‘unprecedented levels of trolling’ this month, as keyboard warriors took to social media to accuse TV meteorologists of spreading hysteria during the heatwave.

The BBC said they were inundated with comments on social media telling them to ‘get a grip’, while others questioned the accuracy of their reports as the nation sweltered in heat that got as high as 40C.

Social media trolls seemed most whipped up by reports linking the heatwave with secular trends caused by climate change, according to the Royal Meteorological Society.

BBC meteorologist Matt Taylor said he had found the amount of online abuse levelled at him this month ‘depressing’.

He said: ‘Ít’s a more abusive tone than I’ve ever received.

‘I switched off a bit from it all as it became too depressing to read some of the responses.’

The Royal Meteorological Society also weighed in on the pushback received by their members during the heatwave.

The Met Office’s lead meteorologist Alex Deakin urged trolls to ‘show a bit of respect’ for his beleaguered colleagues.

He told the BBC: ‘I find it more frustrating and offensive for my colleagues – some of the great minds in climate science.

‘Show a bit of respect and do a bit more research rather than just believe Bob down the pub or Tony on YouTube.’ 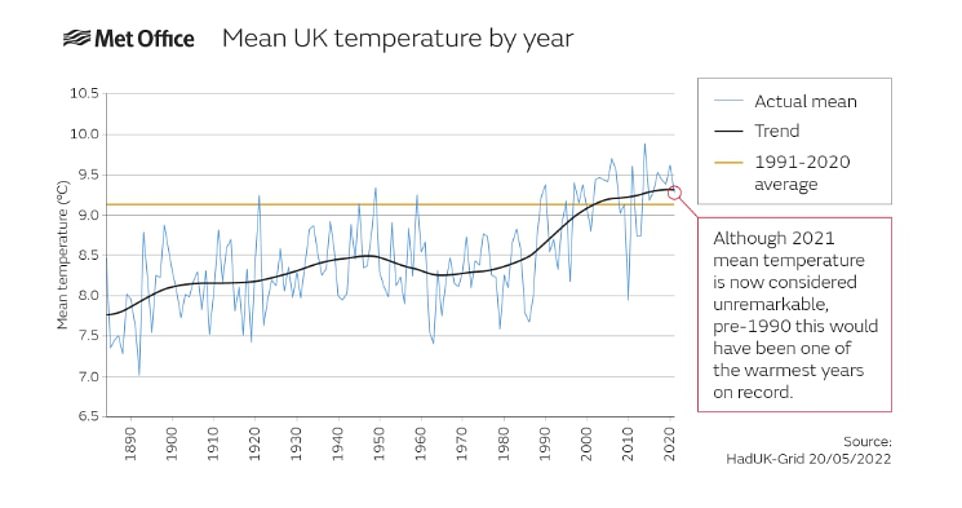 A Met Office chart showing how, although the mean 2021 temperature is now considered unremarkable, pre-1990 this would have been one of the warmest years on record