Priya Murugappan’s treacherous journey to Australia aboard an overcrowded boat with no food and water has been laid bare by a fellow Tamil woman who also fled on the vessel and was detained on Christmas Island.

Priya and Nadesalingam Muruguppan and their Australian-born daughters, Kopika and Tharnicaa have been in detention on Christmas Island since August 2019 and have their hopes of staying in Australia pinned on a court battle preventing their deportation. 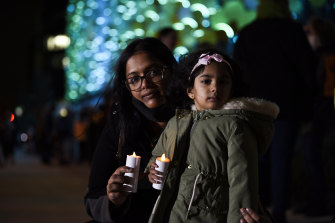 Vani Santhirasegaram and her daughter Akshaya during the vigil in support of the Murugappan family at Perth Children’s Hospital. Credit:Marta Pascual Juanola

The case has put a renewed focus on long-argued debates about Australia’s approach to asylum seekers since Tharnicaa —who turns four on Saturday — was evacuated to Perth Children’s Hospital on Monday where she was diagnosed with pneumonia after being ill for two weeks.

Priya and Nadesalingam fled separately from Sri Lanka to Australia by boat in 2013 and 2012 fearing persecution by authorities following a bloody civil war due to their links to the Liberation Tigers of Tamil Eelam (LTTE).

Another Tamil woman, who does not want to be named for fear of deportation, said almost 100 women and children were crammed onto the rickety fishing boat which broke down nine days into the journey to Australia.

She said the asylum seekers, who boarded at an Indian port, weren’t provided with water or food and some ran out of snacks after three days.

By day nine the toilet and other basic facilities had stopped working as the boat navigated the Indian Ocean’s stormy seas and the captain had to call in help to be towed to Australian waters.

The woman described Priya as a very strong woman who helped those on board with food and comforted them throughout the journey, as they cried in fear.

The woman remembers the joy of seeing land for the first time after 12 days at sea but her hopes of settling in Australia were quickly dashed as she and Priya were sent to Christmas Island’s detention centre.

“Together me and Priya [were] crying, crying in Christmas Island,” she recalled.

The pair were placed in detention together, where they were confined to their rooms and only allowed to briefly go outside after meals. 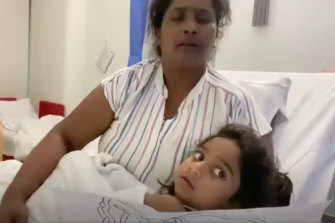 They were eventually sent to another facility in Darwin and later to Sydney, where they were finally allowed to go out in the community on a temporary visa.

The pair stayed in touch and when Priya was hospitalised last year after falling ill on Christmas Island the woman tried to visit her at Perth’s Fiona Stanley Hospital, where she was under police guard.

The woman said Priya had reported concerns about her mental and physical wellbeing in detention and was fearful for her family’s safety if they returned to Sri Lanka, as Nadesalingam had held senior positions in the LTTE.

The revelations come as more than one hundred people gathered outside Perth Children’s Hospital on Wednesday evening to show their support for the family in an emotional candlelit vigil.

Family friends and strangers stood side by side in the rain to call for the family to be allowed to resettle in Australia permanently, holding handmade signs and singing Twinkle, Twinkle Little Star.

Passing traffic tooted their horns in support as members of Western Australia’s Tamil community shared their own tales of hardship and ever-present worries about being deported back to Sri Lanka.

Perth musician Joe Leach, who attended the vigil with his 10-year-old son Fabijan, recounted meeting the family after performing at a pub on Christmas Island on Australia Day last year. 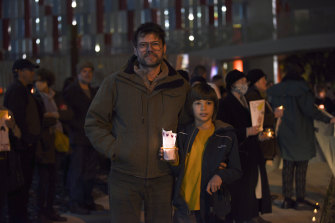 Mr Leach, who met with them at a recreation centre during one of their short breaks outdoors, said it had been terrible to see them under watch after enduring so much hardship.

“I just think that it’s deeply inhumane and to treat people in the way that our government’s treating them, especially in the face of everyone’s outrage,” he said.

“I don’t think that you have to be a parent to relate to how traumatic that might be. I just think it’s deeply inhumane and it’s not achieving any positive outcomes for Australia or for us as people.

But the family’s hopes to be allowed to return to the mainland seems to have been dashed after Home Affairs Minister Karen Andrews told Sunrise on Thursday morning she was not investigating any resettlement options.

“It’s not a case of being mean. We are very strong as a government and our policy in relation to border protection. Quite frankly, I am not going to have people dying trying to come to Australia by sea on my watch. I am not going to open the gates to the people smugglers.”

The comments follow revelations Liberal MPs were privately seeking a solution that lets the family return to the Australian mainland after almost two years of detention.