President Donald Trump demanded that Vice President Mike Pence ‘come through for us’ as the vice president is set to announce President-elect Joe Biden the election winner at a Congressional session on January 6.

‘I hope Mike Pence comes through for us. He’s a great guy,’ Trump said. ‘Of course if he doesn’t come through I won’t like him quite as much,’ Trump told an audience Monday night in Dalton, Georgia.

The president’s allies on Capitol Hill plan to challenge some of the states’ Electoral College counts, which could elongate the Congressional session for hours, even days. Pence will be there just to announce the results.

Still, Trump tried to float that Pence had the power to change his fate.

The New York Times reported Monday that Trump had pressed the vice president to find an alternative to certifying the election for Biden, possibly tossing it to the House of Representatives.

Trump boasted at a rally meant to get out the vote in Georgia for GOP Sens. Kelly Loeffler and David Perdue that he was the 2020 victor.

‘Hello Georgia. By the way there’s no way we lost Georgia. That was a rigged election. But we’re still fighting it. And you’ll see what’s going to happen. We’ll talk about it,’ Trump told the crowd. 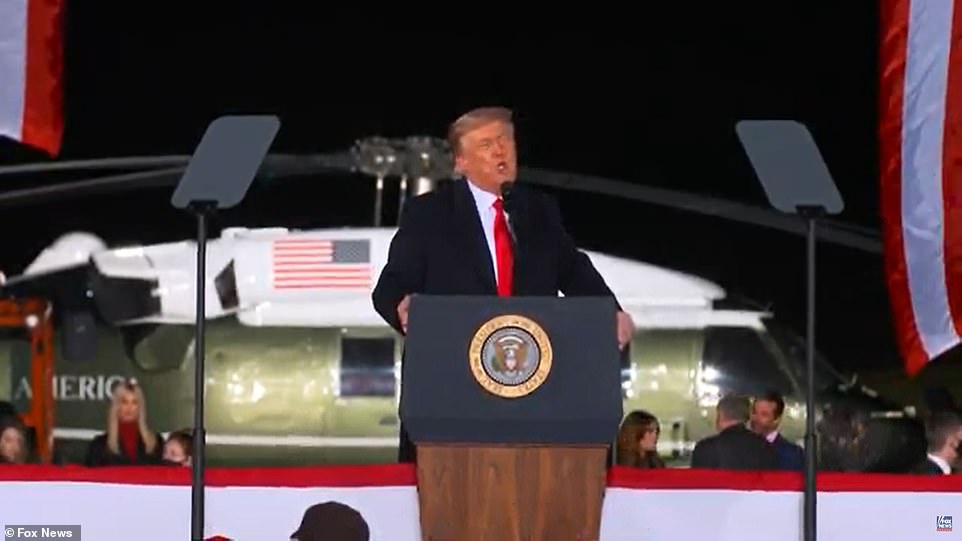 President Donald Trump speaks to a crowd at a rally Monday night in Dalton, Georgia. He immediately started talking about how he had won the 2020 presidential election, which he did not 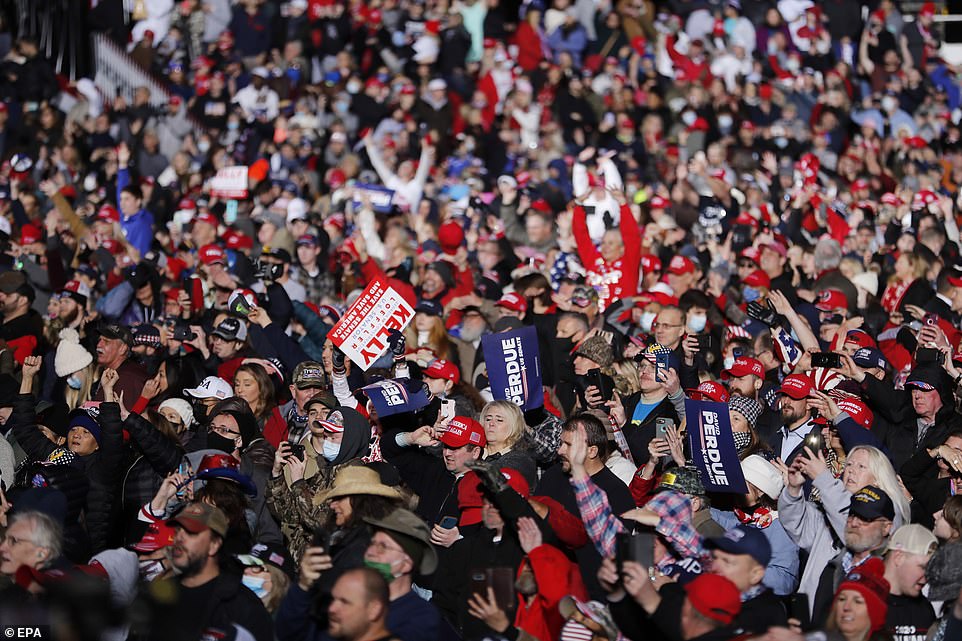 Supporters of President Donald Trump are packed together for a rally headlined by the president Monday night. Early on, Trump mocked President-elect Joe Biden for having a small turnout to a drive-in rally earlier in the day. Biden has kept campaign events small due to the coronavirus pandemic

Trump continued to suggest that there’s no way he could have lost the presidential election to Biden because his crowd size – amid the coronavirus pandemic – was consistently larger.

Biden, unlike Trump, has kept his events small due to the coronavirus pandemic.

Loeffler greeted Trump in Georgia and arrived at the rally site with him.

Earlier Monday she announced she would join 12 other GOP senators and issue challenges to the Electoral College count.

‘On January 6, I will object to the Electoral College vote,’ she told the crowd, who roared. ‘We’re going to get this done.’

‘Are you ready to show America that Georgia is a red state?’ Loeffler said.

The president said Sen. Mike Lee was also in the audience.

The Utah Republican is against the Electoral College vote challenges, which Trump alluded to, saying he was a ‘little mad’ at the lawmaker.

Perdue is in quarantine after being exposed to COVID-19.

Trump still called out to Perdue as if the senator was in the crowd in the opening moments of the rally.

He then huffed that there was ‘no way’ Biden won the election.

‘You know I’ve had two elections, I’ve won both of them, it’s amazing,’ Trump said. ‘And I actually did much better in the second one.’

Trump lost the popular vote in 2020 to Biden by more than 7 million votes.

The president would talk about the run-off race and then veer back into chatter about his own race.

‘America as you know it will be over,’ Trump warned of Democrats getting control of the Senate.

‘And it will never, ever – I believe – be able to come back again. It will be too far gone. Your vote tomorrow could … be your last chance to save the America that we love.’

‘That’s why I’m here, I don’t want to do rallies for other people. I told you,’ Trump continued, but added that he was there for David and Kelly.

Then he’d turn back to the presidential election.

Trump continued to call being overtaken by Biden thanks to mail-in ballots ‘magic.’

‘It was over,’ Trump said of his early leads in states like Pennsylvania, where mail-in ballots had Biden catching up and then surpassing the president days after the election. ‘I should have run up to the podium and said, “Thank you very much for this wonderful victory,”‘ Trump said.

The president rattled off numbers of ballots that he said he won, weaving together a conspiracy theory as the night wore on.

‘I say this because you can’t have this happen tomorrow,’ he said.

Trump’s allegations of widespread voter fraud haven’t been backed up by evidence and case after case from his legal team have been thrown out of court.

Still, he devoted most of the rally to talk of a ‘rigged’ election.

He threw water on the idea that he could simply run again in four years.

Donald Trump Jr. and his girlfriend Kimberly Guilfoyle warmed up the crowd before Trump touched down with Ivanka and Loeffler.

They, too, pushed the idea to supporters that Trump could stay in office after January 20.

Trump’s trip to the Peach State comes hours after Biden held a rival campaign event in Atlanta, Georgia, Monday afternoon to try to give a final campaign boost to Ossoff and Warnock.

At the drive-in style rally, Biden mocked Trump for ‘whining and complaining.’

‘I don’t know why he still wants the job, he doesn’t want to do the work,’ Biden said.

Trump has done few public events since the election was called for Biden, as COVID-19 cases have soared. Biden has also been critical of the administration’s vaccine roll-out, which has gone far slower than expected.

Doubts had been raised earlier Monday over whether Trump would still attend Monday’s rally, as calls mount for a probe into his weekend phone call with Georgia Secretary of State Brad Raffensperger.

Raffensperger leaked Saturday’s phone call and the conversation was first released by the Washington Post Sunday, appearing to show the president desperately trying to pressure the official to ‘find’ votes to turn the state red.

‘All I want to do is this: I just want to find 11,780 votes, which is one more than we have,’ Trump says on the call. ‘There’s nothing wrong with saying, you know, that you’ve recalculated.’

Meanwhile Republicans have voiced concerns that his actions may have scuppered his own party’s chances of taking the Senate.

It comes as fears were already growing within the Republican party that Trump was turning off voters after he claimed the runoffs were ‘illegal’ Saturday. 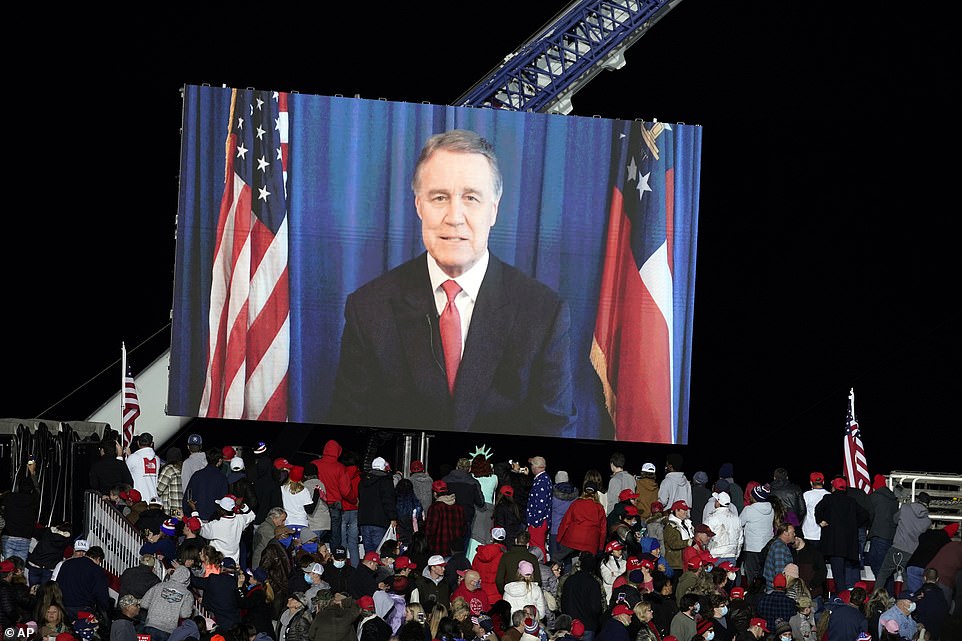 Sen. David Perdue spoke to supporters before the president’s arrival. Perdue is in quarantine after being in contact with a staffer who tested positive for COVID-19 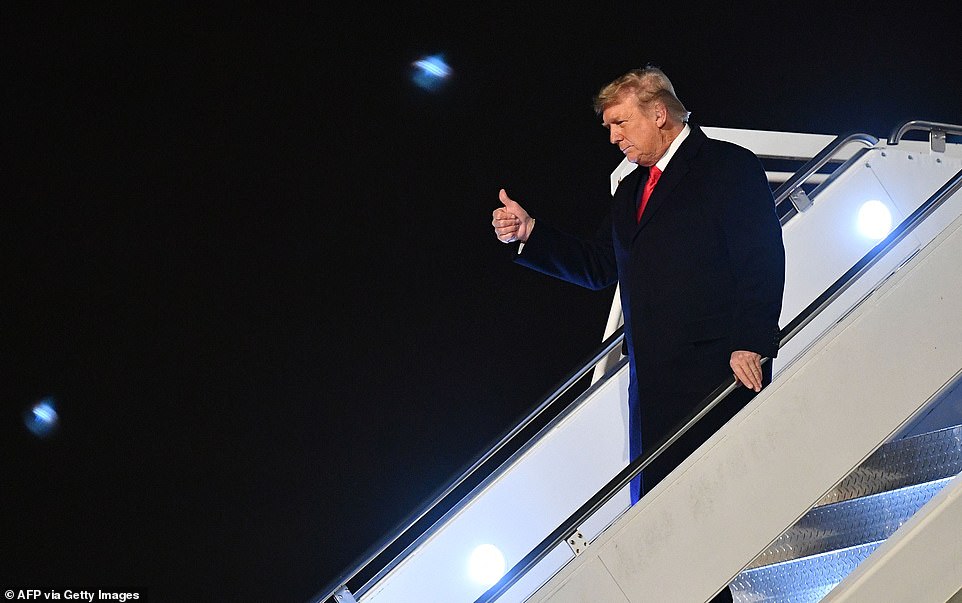 President Donald Trump gives a thumb’s up as he arrives in Georgia Monday night. He’ll take Marine One to the rally site in Dalton 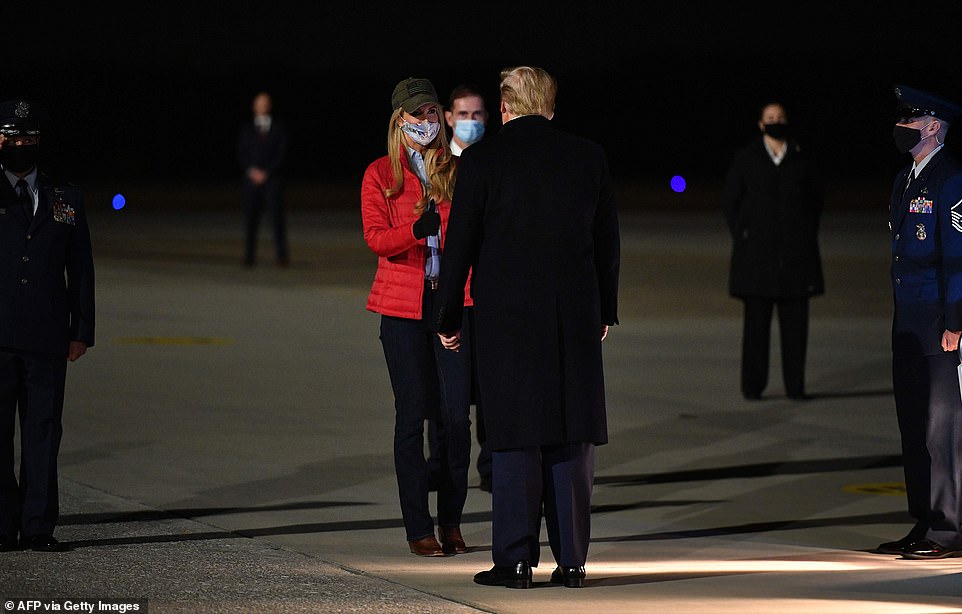 Republican Sen. Kelly Loeffler (left) greets Trump (right) as he arrives Monday night in Georgia to headline a rally in her honor 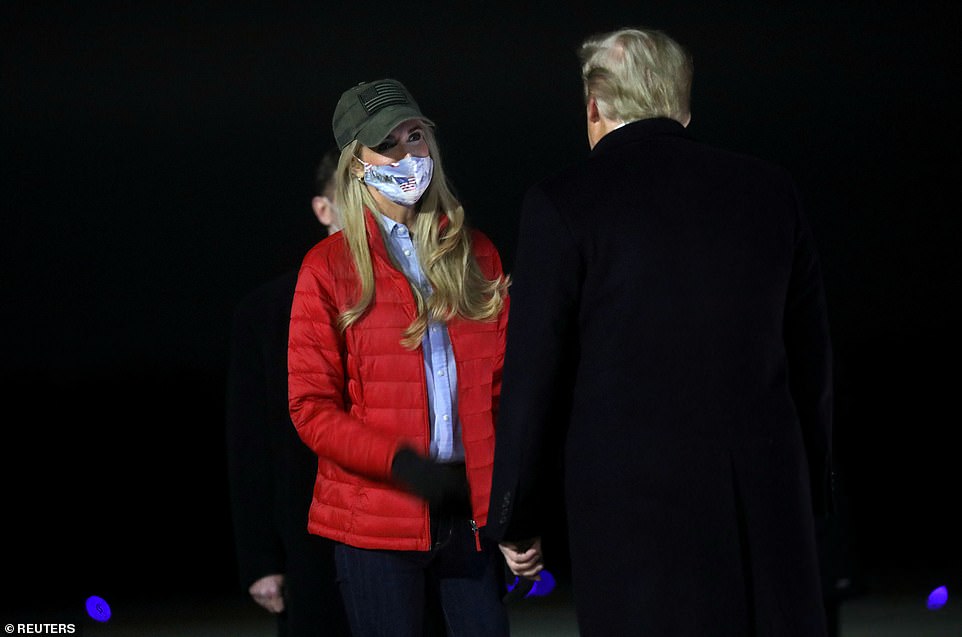 Sen. Kelly Loeffler, one of the two Georgia Republicans on the ballot Tuesday, greeted Trump on the tarmac 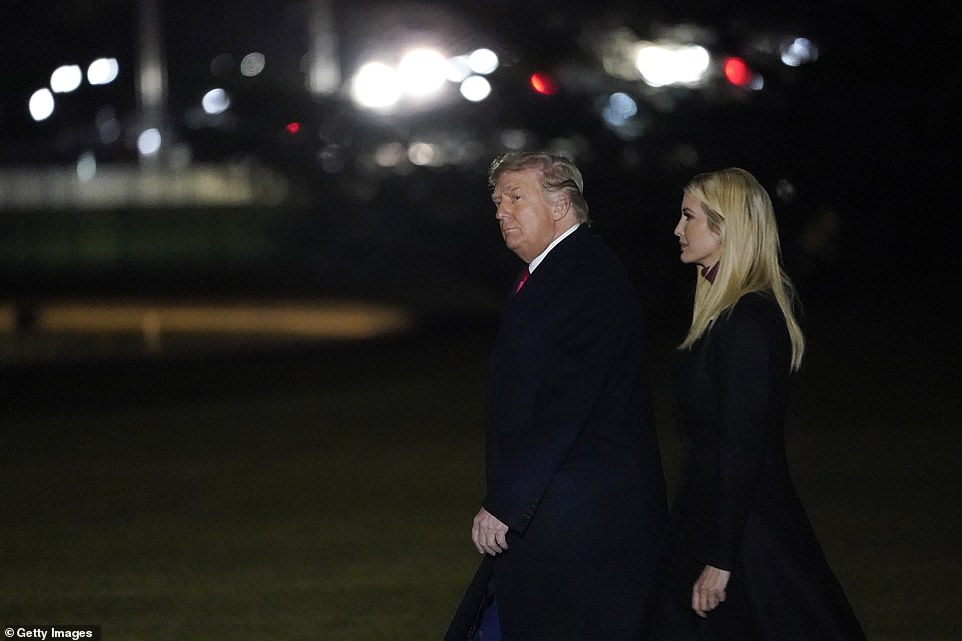 Trump left the White House with Ivanka to head to Dalton for a Senate runoff rally, despite calls for him to be investigated over the leaked phone call where he demanded the Georgia Secretary of State ‘find’ votes to overturn the presidential election 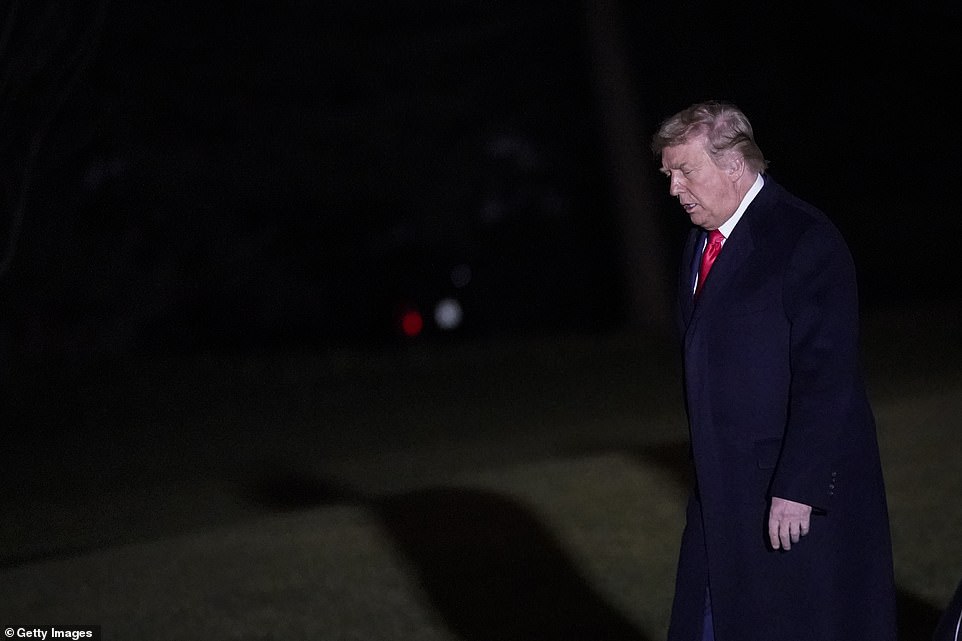 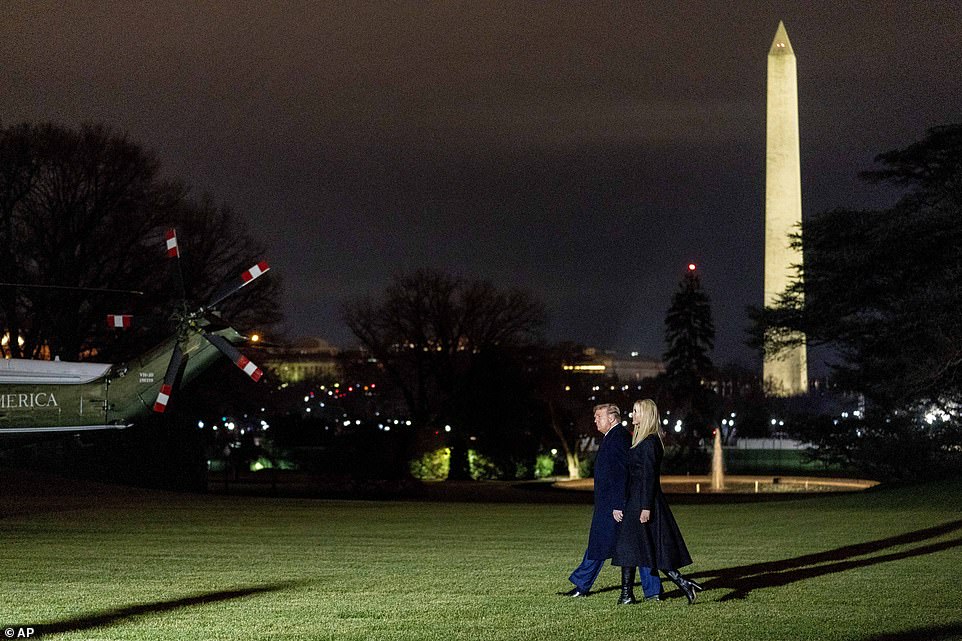 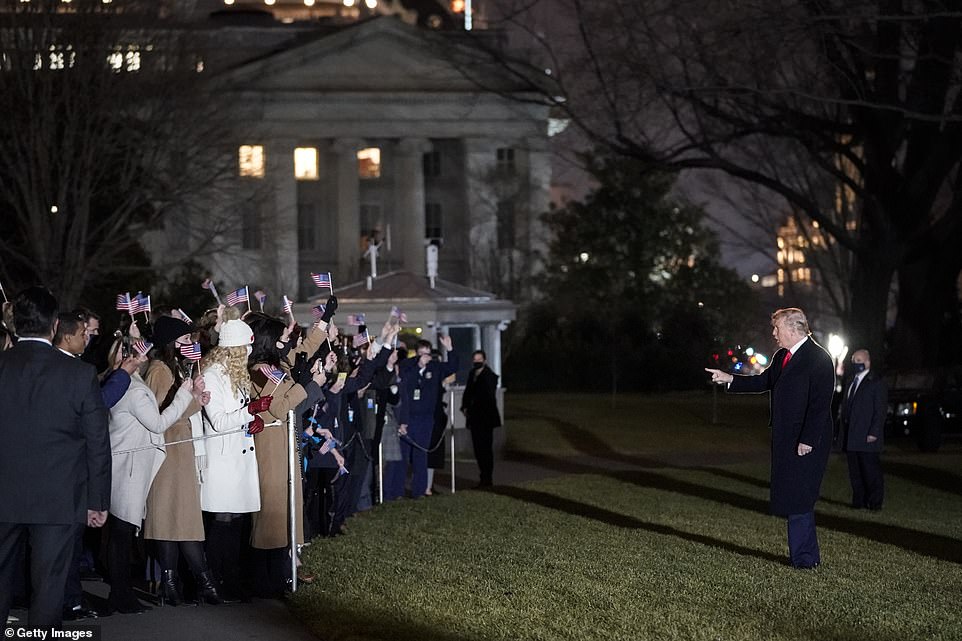 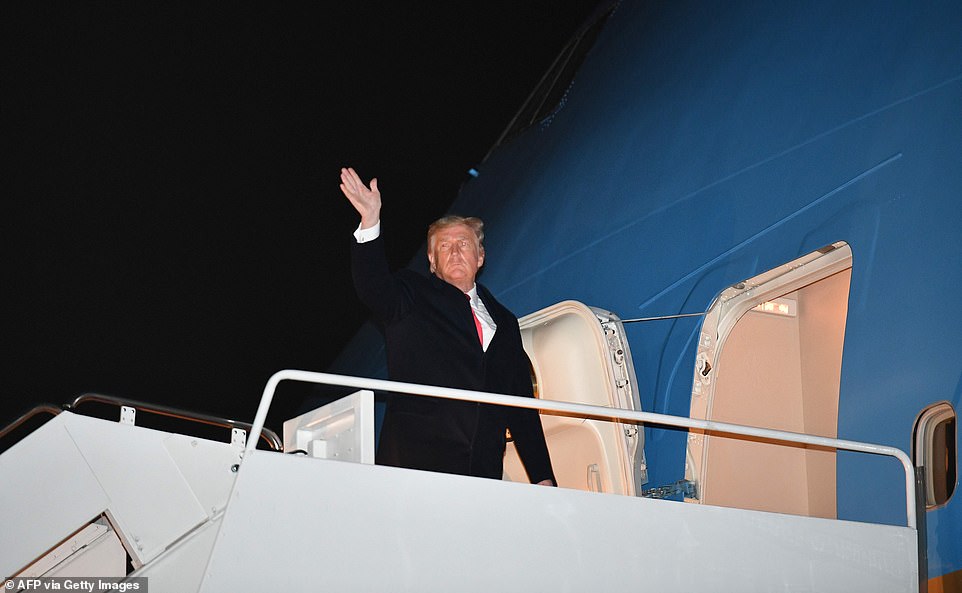 At the White House Monday, Trump greeted supporters on the lawn who waved American flags as he headed toward Marine One.

While Ivanka flashed a smile, the president wore a solemn expression as he ascended the steps and turned to wave goodbye to his fans.

Trump had vowed Saturday to travel to Georgia Monday to support the GOP candidates ahead of Tuesday’s crucial senate runoff election.

GOP candidates Perdue and Loeffler are up against Democrats Warnock and Ossoff in the January 5 vote.

If the Democrats win both senate seats, it will create a 50/50 split in the Senate, and give incoming Vice President Kamala Harris the deciding vote – leaving Democrats in control of the White House, House and Senate, and Trump’s MAGA legacy in tatters.

Democrats reportedly hold an edge in early, in-person voting in the run-off races with Fox News reporting that 2.8 million Georgians have already cast ballots and participation has so far been higher in Democratic Congressional districts.

In a rage over the leaked phone call, Trump was reportedly floating the idea of pulling out of Monday’s rally but was persuaded to go ahead.

At the rally, he called out the state’s Republican Gov. Brian Kemp, for being supportive of Raffensperger and other Republican election officials.

‘I’ll be here in about a year and a half campaigning against your governor, I guarantee it,’ Trump said.

As he ended the rally, using lines from his normal campaign speech, he again promised that the ‘best is yet to come.’ 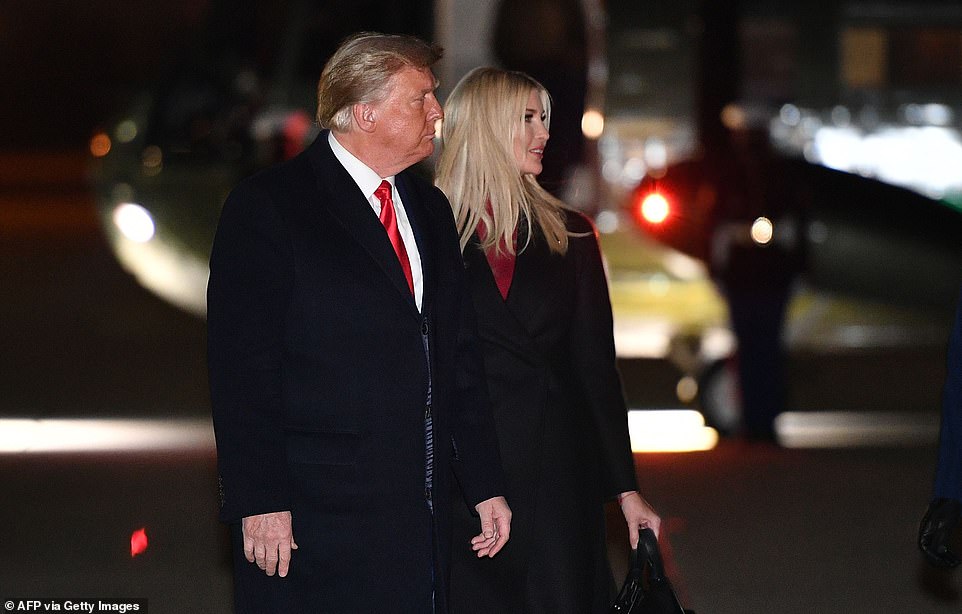 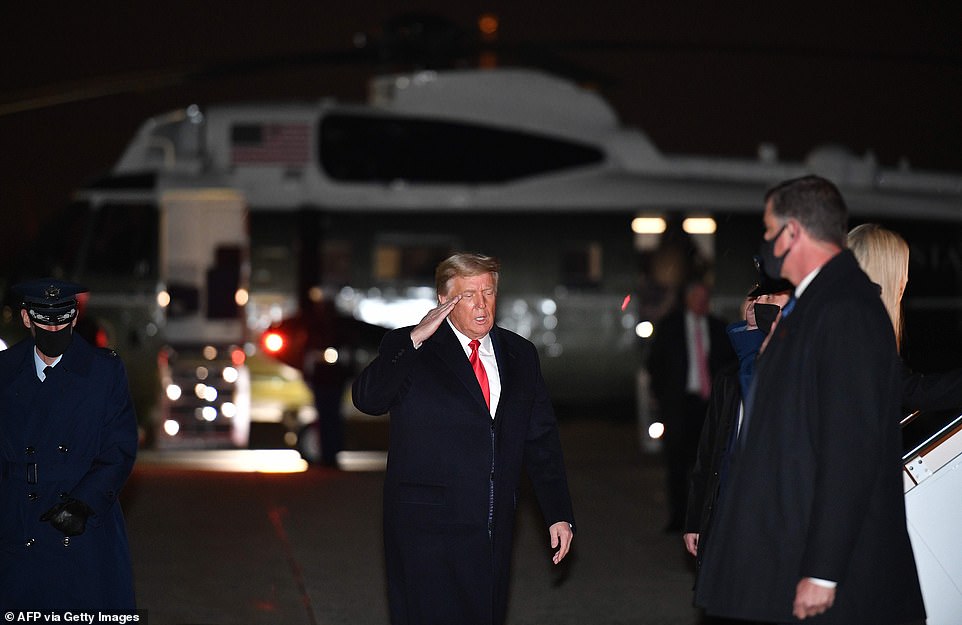 Doubts had been raised earlier Monday over whether Trump would still attend the rally, as calls mounted for a probe into the weekend phone call 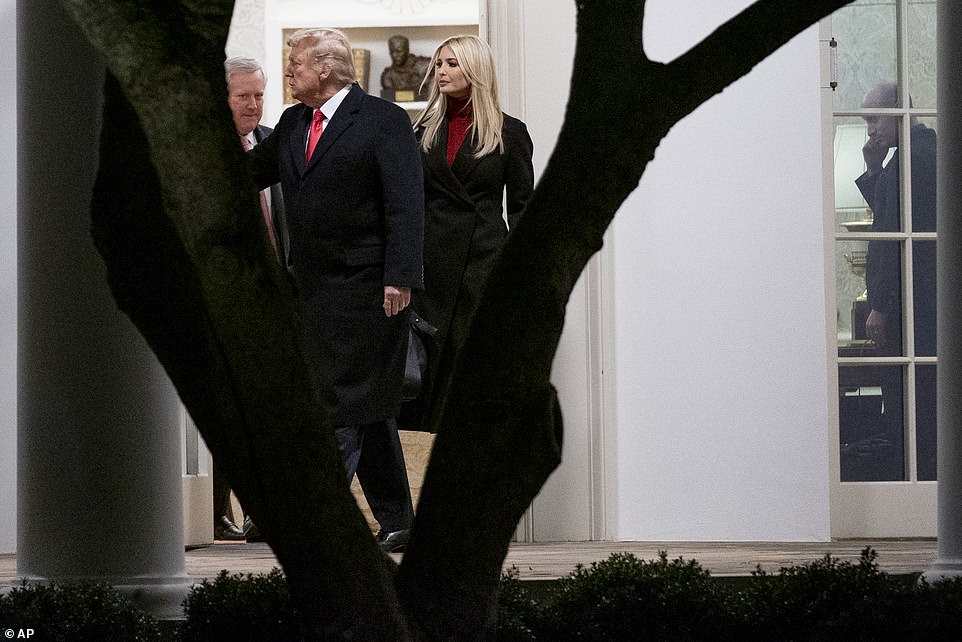 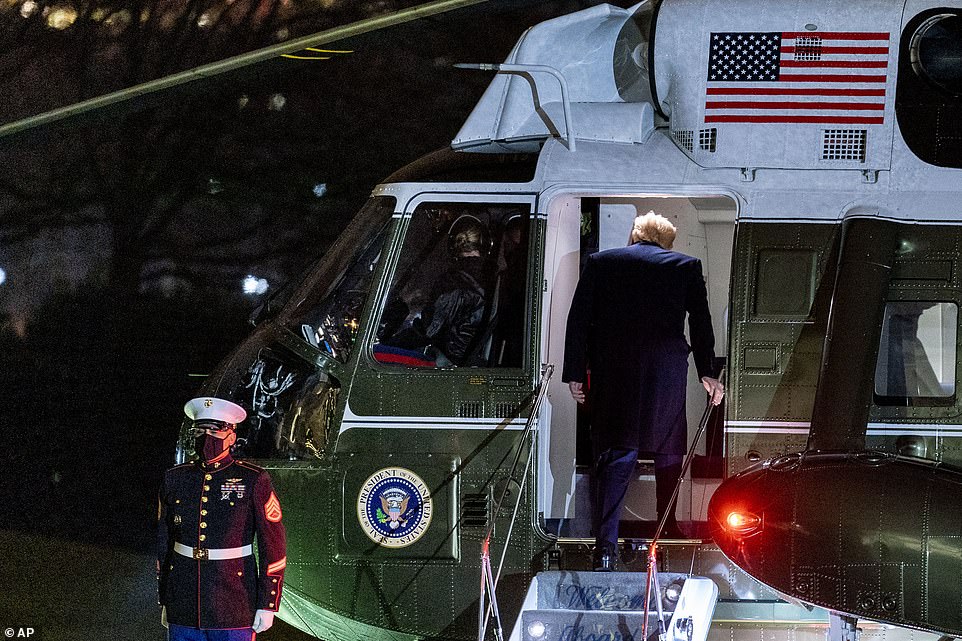 Trump boards Marine One on the South Lawn of the White House to head to the rally which comes just hours after President-elect Joe Biden held a rival campaign event in Atlanta, Georgia 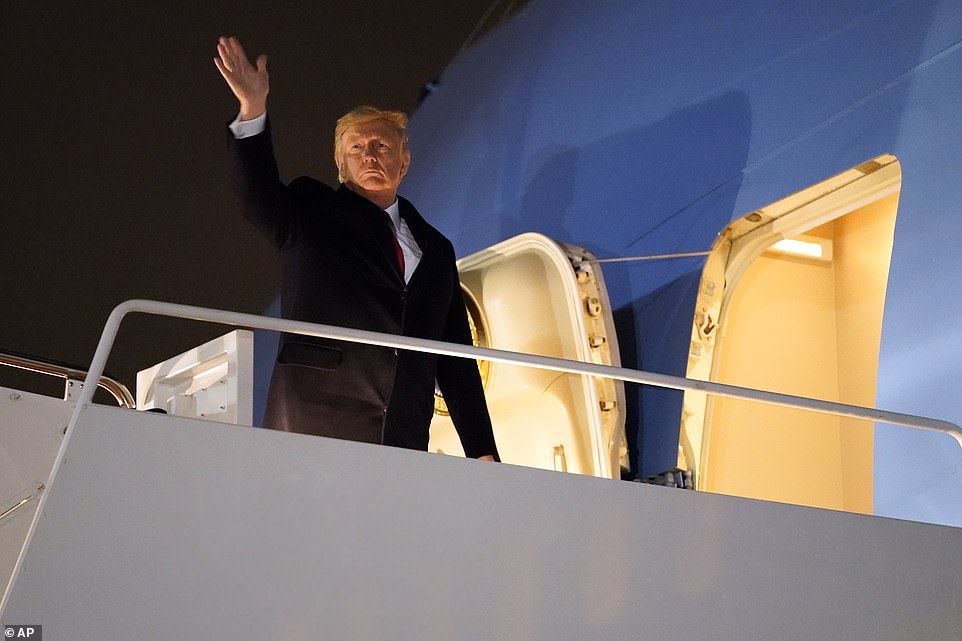 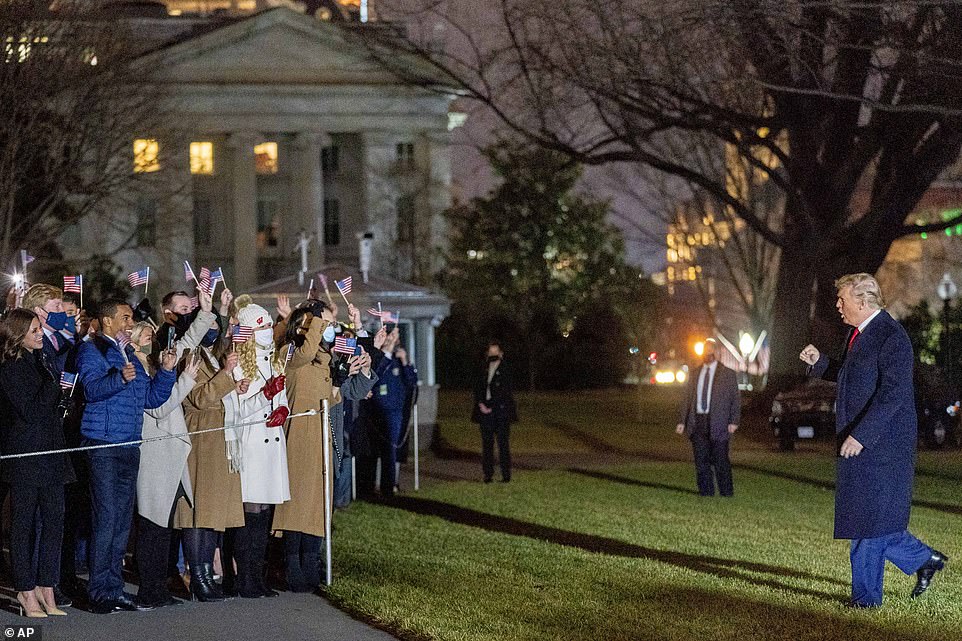 Saturday’s phone call was first released by the Washington Post Sunday, appearing to show the president desperately trying to pressure the Georgia official to ‘find’ votes to turn the state red 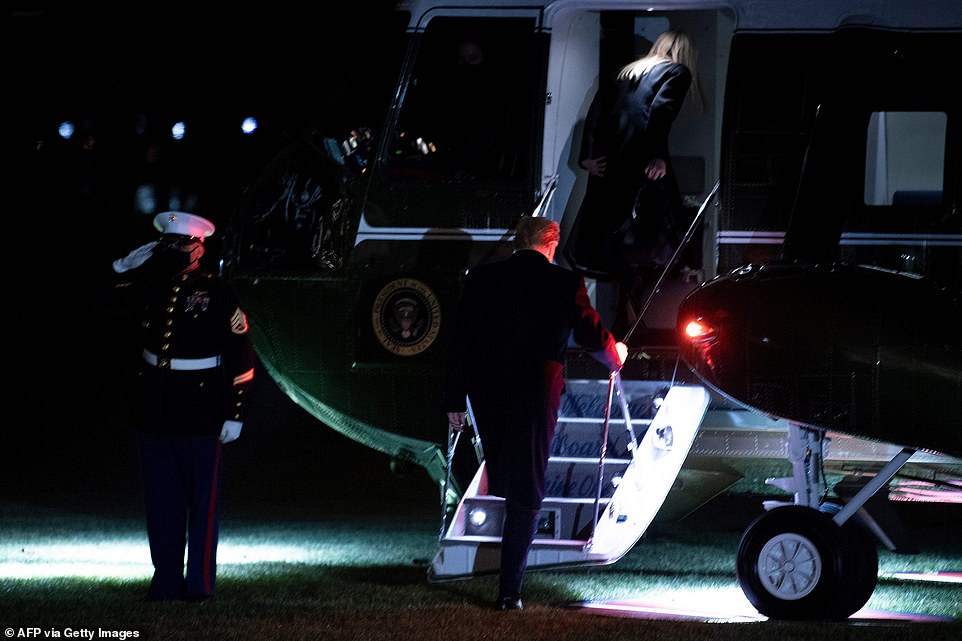 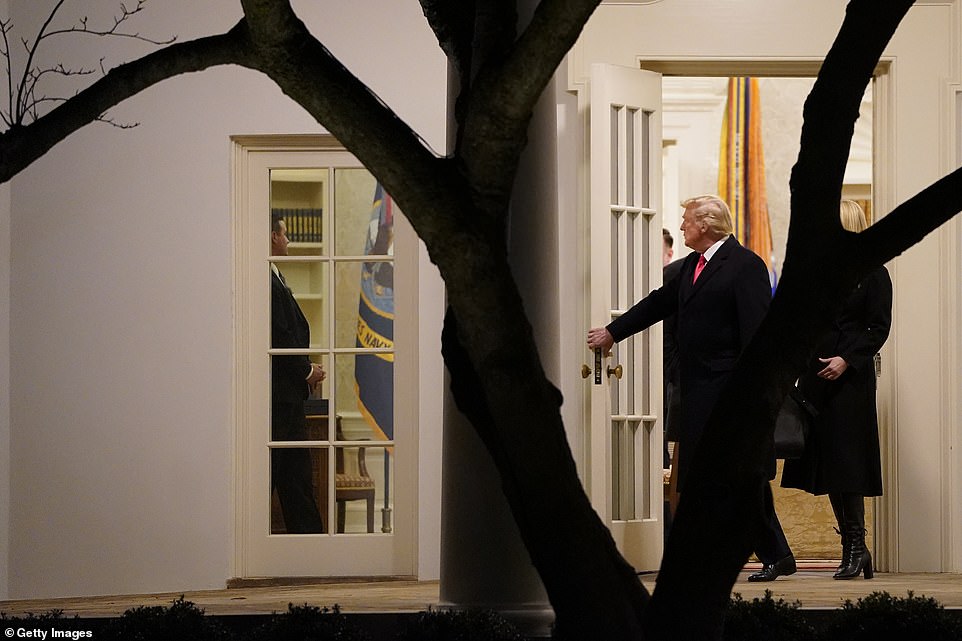 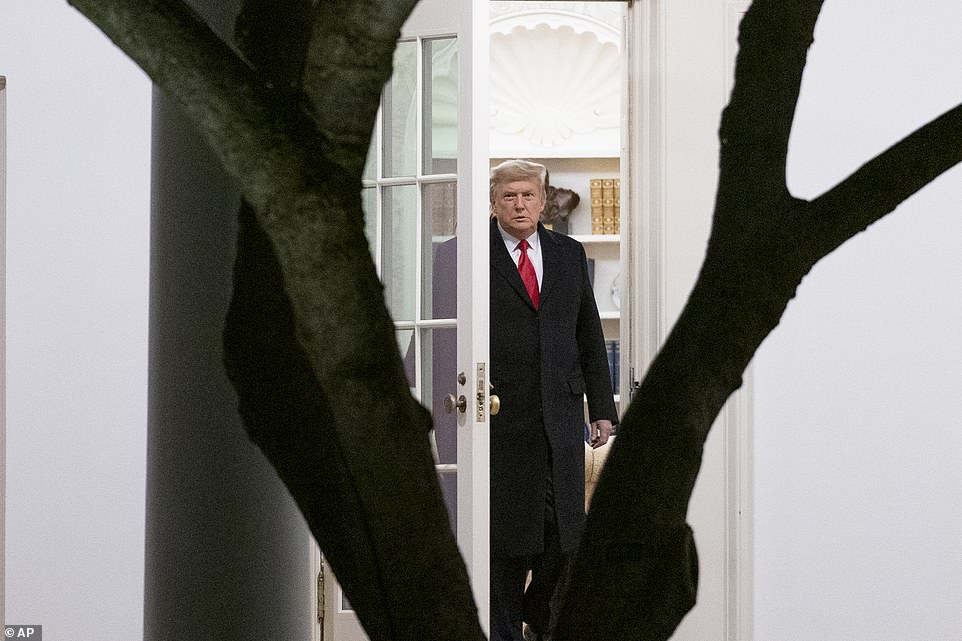 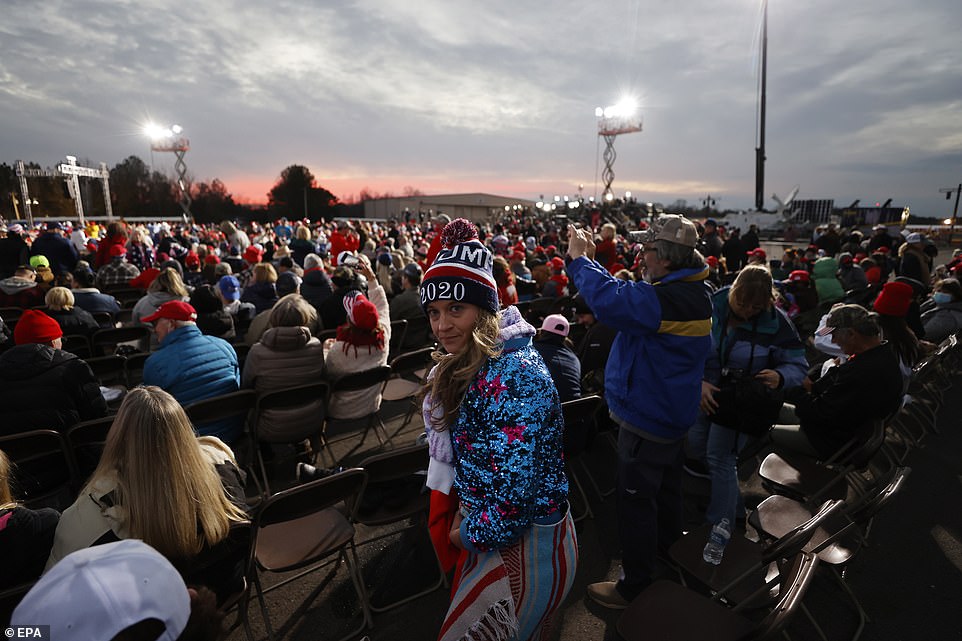 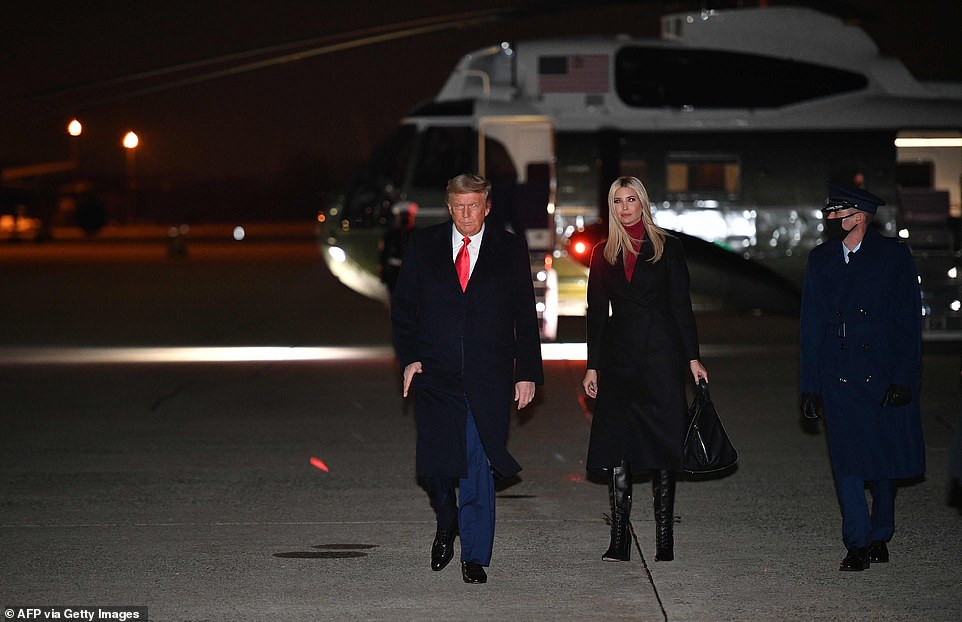 Trump, accompanied by his daughter and Senior advisor to the President Ivanka Trump, makes his way to board Air Force One before departing from Andrews Air Force Base in Maryland 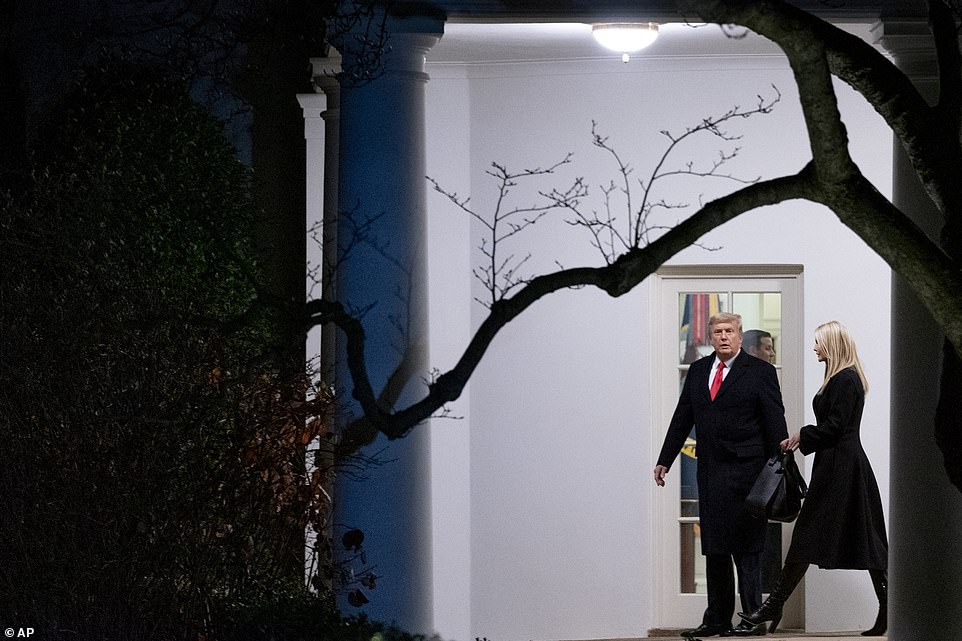 President Donald Trump, accompanied by Ivanka Trump, walks out of the Oval Office to board Marine One