Washington: Former US president Donald Trump has hit back at claims he incited last year’s attack on the US Capitol and has blasted his former attorney-general as a “coward” for debunking his view of a rigged election.

Shortly after a Congressional hearing accused Trump of being at the centre of a deliberate conspiracy to overturn his 2020 loss to Joe Biden, the former president used his social media platform, Truth Social, to reject the findings against him. 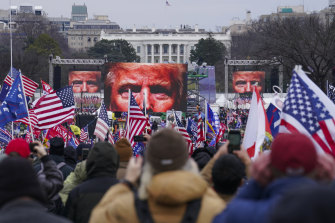 Supporters of Donald Trump gather outside the US Capitol before the January 6 insurrection. Credit:AP

“The so-called ‘rush on the Capitol’ was not caused by me, it was caused by a rigged and stolen election!’” he declared.

Trump denied the committee’s claim that he had said his vice president Mike Pence “deserves” to be hanged for not tossing out electoral votes, insisting instead that “this is either a made-up story by somebody looking to become a star, or fake news!”

He also said his daughter Ivanka – who gave evidence to the committee showing she did not agree with her father’s view of election fraud – had “long since checked out” and “was not involved in looking at, or studying, election results.” 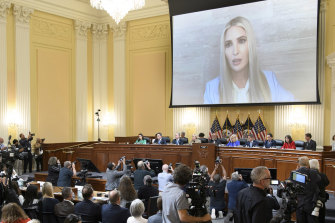 Ivanka Trump’s testimony is replayed on a screen at the House select committee’s first public hearing into the Capitol riots.Credit:AP

But his lengthiest rant took aim at former attorney-general Bill Barr, who had told investigators that he’d made it clear to Trump that he did not want to be part of the electoral fraud conspiracy, believing it to be “bullshit”.

“Bill Barr was a weak and frightened attorney-general who was always being ‘played’ and threatened by the Democrats and was scared stiff of being impeached,” Trump fumed.

“The Democrats hit pay dirt with Barr, he was stupid, ridiculously said there was no problem with the election and they left him alone. It worked for him, but not for our country!”

Trump’s comments represent his latest salvo against the January 6 committee, which he has long branded as illegitimate. So too have most Republicans and conservative news networks such as Fox, which refused to televise its first public hearing on Thursday night. 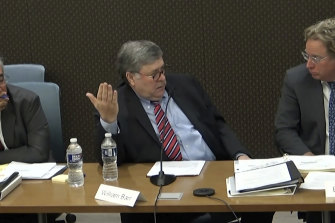 The hearing was broadcast by most other networks during the 8pm prime-time slot in the US, giving Americans the first real glimpse of an 11-month-long investigation that has so far amassed about 140,000 documents, interviewed 1000 witnesses and cost $US3.5 million ($5 million).

Over two hours, the committee laid out in meticulous detail the extent of Trump’s efforts to keep himself in office. It made the case that Trump not only incited the January 6 Capitol attack but was central to a sweeping and methodical conspiracy to overturn Biden’s victory despite the advice of his top aides and family members.

On Friday (US time), President Joe Biden said it was important the Americans “understand what truly happened” and “understand that the same forces that led January 6 remain at work today”.

“We have to protect our democracy,” he said. “We’ve seen how the battle for the soul of America has been far from won.”

Thursday’s hearing was the first of at least six public hearings by the nine member committee, which features two Republicans who have now been sidelined by their party: Liz Cheney and Adam Kinzinger.

She also rebuked her Republican peers, who forced Cheney out of a key party leadership position last year for speaking out about Trump and are now trying to oust her in a primary.

“I say this to my Republican colleagues who are defending the indefensible,” she said. “There will come a day when Donald Trump is gone, but your dishonour will remain.”

The event of January 6 left several people dead and about 150 police officers injured. The Justice Department have so far charged more than 800 people with crimes related to the assault and has secured three guilty pleas on the rare charge of seditious conspiracy.

The latest was Republican candidate for governor in the state seat of Michigan Ryan Kelley, an ardent supporter of Trump’s “rigged election” theory, who was arrested on Thursday for misdemeanour charges relating to his involvement in the Capitol attack.

Further January 6 committee hearings will take place next week and dive deeper into the evidence, covering Trump’s spreading of electoral information; the pressure placed on Pence to thwart election votes being counted; his plot to fire Barr in a bid to get the Department of Justice to further his claims; and his summoning of supporters to storm the Capitol.