Millions of people who are eligible for a Covid booster vaccine have not yet had their third dose, official figures suggest.

Up to 5million people in England currently qualify for a booster jab but only around a third have come forward for one.

It comes after a top Government scientific advisor said he wanted Britain to be ‘more aggressive’ with the rollout to limit the damage of a winter wave of cases.

A total of 1.7million people in England have received a booster since the programme was signed off last month.

Invites are only being sent out to those who received their second dose at least six months ago because that is the ‘sweet spot’ for immunity.

For this reason, the rollout was always expected to be slower than the initial jab blitz, which at its peak saw 800,000 people vaccinated per day.

But official figures show 4.9m people finished their two-dose vaccination schedule six months ago, with the majority meeting the criteria making them eligible for a top-up now.

About 400,000 of the people jabbed half a year ago were immunocompromised and are receiving their third dose on a slightly different schedule. And many people who were vaccinated first originally were elderly and may have passed away in the past six months.

But even when these are discounted, it still leaves millions of eligible and vulnerable people with subpar immunity.

Earlier this week, Professor Neil Ferguson, a crucial member of the Government’s scientific body SAGE, suggested the booster scheme was going too slowly. 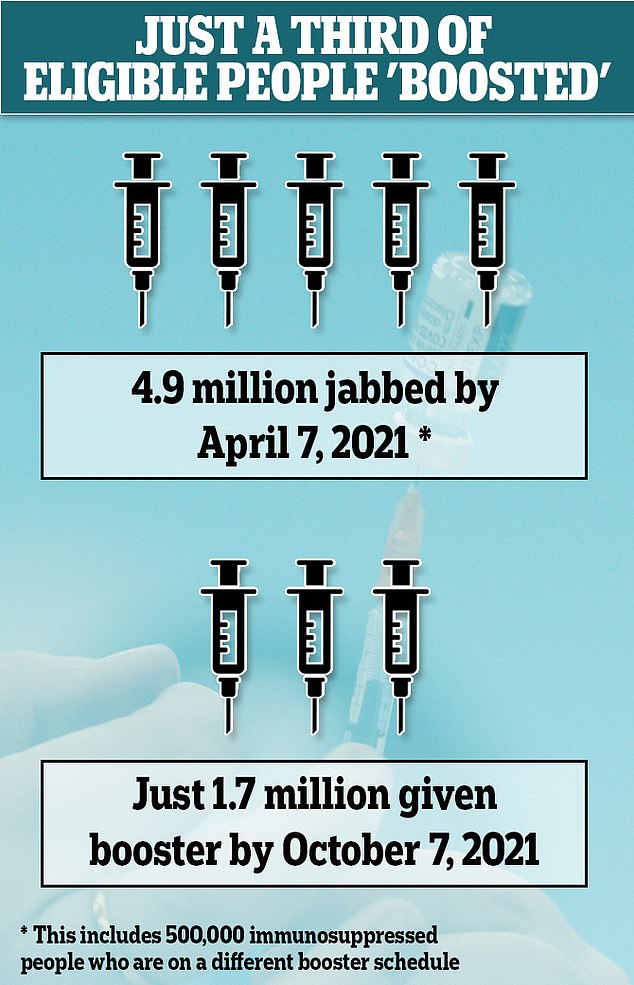 Just a third of people eligible for a Covid booster vaccine in England have had their third dose, official figures suggest. NHS bosses revealed on Thursday that 1.7million people in England have been given a booster since the programme was signed off last month 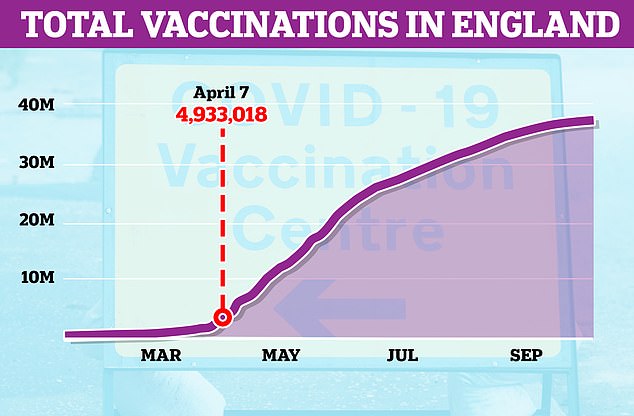 Government Covid dashboard data shows that by this time six months ago, 4.93m people in England had been double-dosed, which should make them eligible for a booster now

The epidemiologist – dubbed ‘Professor Lockdown’ after his modelling startled No10 into shutting down last spring – said UK immunity lagged behind other countries.

He told a cross-party group of MPs: ‘I’d like to see us be a little bit more aggressive in rolling out booster doses as well, because the sooner we can, the sooner we will reap the benefits.’

Roughly 32m Britons in the top priority groups will be invited for a booster Covid vaccine in the coming months.

The number of Britons falling ill with Covid every day has jumped to the highest level since January, according to the UK’s largest symptom-tracking study.

King’s College London scientists estimated 66,033 people were getting infected daily in the week ending October 2, up 13.6 per cent from 58,126 the week before.

Cases in children appear to be turning a corner but are still extremely high, with around one in 30 school pupils contracting the virus — nearly three times more than the next highest rate in 35 to 55-year-olds.

Professor Tim Spector, the epidemiologist who leads the study, argued allowing Covid to ‘run rampant’ in schools was ‘a real gamble’. He said he hoped that ‘herd immunity will kick in and cases will drop’ in children soon.

It came as new Education Secretary Nadhim Zahawi admitted that face masks could make a return in schools this winter if cases show no sign of slowing down.

They include all over-50s, health and care workers and patients with serious underlying health conditions.

The plans were signed off on September 14 after weeks of deliberation and the first booster was administered two days later.

Until yesterday, it was unclear how many third doses had been rolled out because the figures are not routinely published.

The 1.7m figure for England revealed by health officials yesterday means that the NHS is vaccinating roughly 560,000 of the most vulnerable people each week.

For comparison, NHS England was vaccinating that number of people each day in spring when the jabs first became widely available.

It’s unclear how many boosters have been rolled out in Scotland, Wales and Northern Ireland.

Government Covid dashboard data shows that by this time six months ago, 4.93m people in England had been double-dosed.

An NHS spokesperson said: ‘Thanks to the hard work of NHS staff, out of the four million people who are currently eligible in England, 1.7 million booster vaccines have already been delivered – and in the space of just three weeks.

‘People who are eligible and had their second vaccination six months ago, should come forward for their top up jab for protection ahead of the winter.’

A senior source close to the booster programme plans echoed the comments, encouraging people to be ‘very proactive’ and book their booster ‘the very moment they get a text’.

Around 500,000 immunocompromised people around the UK are being given their third doses on a different schedule from the mass booster programme.

People with severely weakened immune systems are timing their third dose with their GP to give them the best possible immunity.

This might mean waiting until finishing a course of medicine that prevent the vaccine from stimulating a good response.

Meanwhile, health bosses have pleaded with Britons to come forward for their Covid boosters, which will be administered at the same time as the annual flu shot where there is plenty of supply.

Health and Social Care Secretary Sajid Javid, said: ‘This year we are rolling out the largest flu vaccine programme in our history, alongside the new COVID-19 booster vaccine rollout; both are important to provide vital protection not only to yourself, but also your loved ones while also helping to ease pressure on the NHS.

‘The COVID-19 vaccine programme is a fantastic example of how successful vaccination programmes can be – with around 130,000 lives saved. It is vital we continue that incredible progress with all those eligible ensuring they get both their flu and COVID-19 booster injections as soon as they are invited.’

Officials have said they do not expect the same rush for booster jabs as they initially saw when the vaccines were first rolled out.

Experts have reiterated that two doses are the most vital for protection. The third boosts and extends the duration of immunity.

Data from Israel suggests a booster shot slashes the risk of infection by 11 times and makes people up to 20 times less likely to need hospital care, compared to someone who had their second dose six months ago.

Doses of the Pfizer jab, or a half dose of Moderna, are being administered as boosters in the UK, even if someone originally had AstraZeneca.

For those who cannot get either of those two mRNA jabs, such as due to an allergy, they will be given a dose of AstraZeneca’s vaccine.

A half dose of Moderna has been chosen because it was found to have fewer side effects but similar efficacy.