SCOTLAND was woken by shaking homes last night as a terrifying 3.1 magnitude earthquake hit the country.

Startled residents reported the disturbance on social media shortly before 2am on Tuesday. 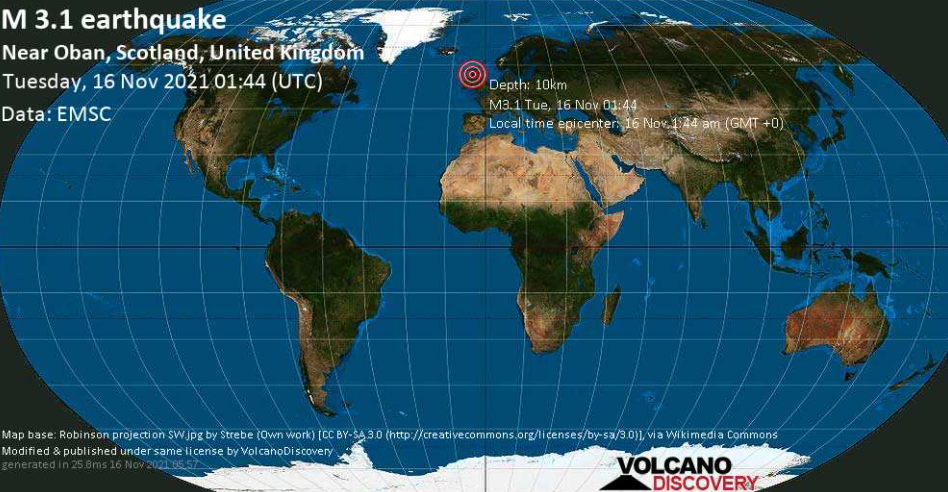 The epicentre of the quake is believed to be near Greenock, Inverclyde, and is thought to have been of a magnitude 3.1.

Nearby residents said their homes shook during the tremor.

One said: "Nothing like an earthquake to jolt you up. That's the biggest one I've felt. Whole house shook."

They added: "I'm in Tarbert Argyll. I've never felt one that big, everything in my room shook."

Someone else wrote: "Argyll earthquake was around 7km from Lochgilphead and felt widely across Argyllshire."

The United States Geological Survey said the quake was at a shallow depth of 10km with a tremor size of 3.1 size.

It is said to have struck at 1.44am about 11 miles northwest of Lochgilphead, where houses shook.

The latest tremor in the UK comes a month after an earthquake was felt in north Wales.

People in Snowdonia heard a "big rumble sound" on Sunday, confirmed to be a mini 1.0 earthquake on the Richter scale.

It was recorded at a depth of 6km with the epicentre given as "3km north-north-east of the village of Dolgarrog, Conwy".

According to the British Geological Survey between 200 and 300 earthquakes are detected each year in the UK.

Earthquakes that occur on the mainland with a magnitude of between 3 and 3.9 happen on average every three years.