The UK’s soaring inflation rate will leave it with the weakest economy in the G7 next year, the International Monetary Fund (IMF) warned today.

The global economic body said that the costs hike, which hit 9.4 per cent last week, will leave Britain with the slowest growth of any major nation apart from sanction-crippled Russia.

It came as the IMF warned that stalling growth across the world means we could be ‘teetering on the edge of a global recession’.

In its latest World Economic Outlook update, the body downgraded its UK growth forecast for 2022 to 3.2 per cent, from 3.7 per cent in April. This had already been a downgrade from 4.7 per cent at the start of the year.

The outlook for the UK is expected to become even more gloomy in 2023, with the IMF cutting its forecast for next year to 0.5 per cent growth from a previous 1.2 per cent estimate.

In 2023, the UK is projected to have the weakest growth of the world’s biggest economies, excluding Russia.

The news, though gloomy for the country, could help booster Rishi Sunak’s case to become the next Tory leader.

He has said he will only cut taxes when inflation is brought under control, viewing it as the major economic challenge the next PM faces. 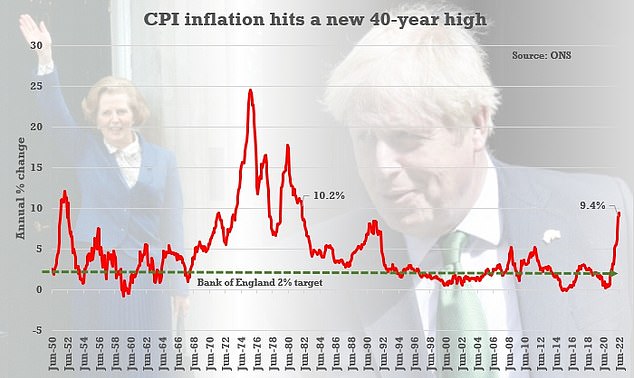 The headline CPI rate climbed to an eye-watering 9.4 per cent in June, up from 9.1 per cent the previous month. The increase was even bigger than analysts had expected, and sets another peak since February 1982 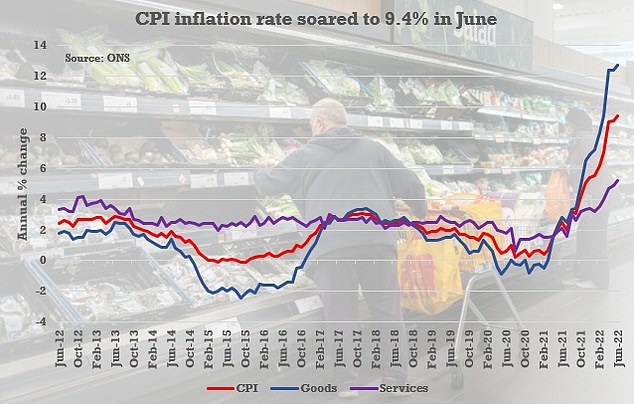 The Tory leadership candidates clashed over when taxes should be cut on BBC News’ The UK Next Prime Minister: The Debate show.

On when is the right time to cut taxes, Mr Sunak said: ‘Well look, we all took a decision to protect the economy and support the NHS through Covid, and of course we all knew there was a bill that we needed to pay for that, so the question is, should we pay that bill ourselves or do we put it on the country’s credit card and pass the tab to our children and grandchildren to take care of.

‘Now, I don’t think that’s right, I don’t think it’s responsible and it’s certainly not Conservative and that’s what I wouldn’t do as prime minister.’

Liz Truss said: ‘Under my plans, we would start paying back the debt in three years time, so I’m not putting it on the never never.’

Ms Truss said: ‘Rishi that is not true, under my plans, we would start paying down the debts in three years time, Covid was a one in 100 years event, no other country is putting up taxes at this moment, the OECD has described Rishi’s policies as contractionary.’

The IMF cut its global growth forecasts for this year to 3.2 per cent, from a previous 3.6 per cent projection.

‘The world may soon be teetering on the edge of a global recession only two years after the last one.’

It also warned that global inflation forecasts have worsened over the past quarter as consumer have been hit by rising food and energy prices.

Inflation is anticipated to rise by 6.6 per cent in advanced economies, after a 0.9 percentage point increase to forecasts.

Meanwhile, developing economies are due to face a 9.5 per cent inflation rate for the year.