KYIV (Reuters) – Ukraine forged ahead on Monday with efforts to restart grain exports from its Black Sea ports under a deal aimed at easing global food shortages but said a weekend missile strike by Russian forces on Odesa underlined the risks to deliveries.

As the war entered its sixth month, the Ukrainian military reported widespread Russian shelling in eastern Ukraine overnight and said Moscow continued to prepare for an assault on Bakhmut in the industrial Donbas region, which Moscow aims to seize on behalf of separatist proxies.

Near Kharkiv, Ukraine’s second largest city located in the country’s northeast, three people were trapped under the rubble of a cultural centre in the town of Chuhuyiv and a fourth person was wounded, President Volodymyr Zelenskiy’s office said.

Zelenskiy denounced Saturday’s attack on Odesa port as “barbarism” that showed Moscow could not be trusted to implement the deal struck a day earlier with Turkish and United Nations mediation.

That deal aims to allow safe passage in and out of Ukrainian ports, blocked by Russia’s Black Sea fleet since Moscow’s Feb. 24 invasion. A U.N. official called the deal a “de facto ceasefire” for the ships and facilities covered.

The Ukrainian military, quoted by public broadcaster Suspilne, said the Russian missiles did not hit the port’s grain storage area or cause significant damage. Kyiv said preparations to resume grain shipments were ongoing.

“We continue technical preparations for the launch of exports of agricultural products from our ports,” Infrastructure Minister Oleksandr Kubrakov said in a Facebook post. 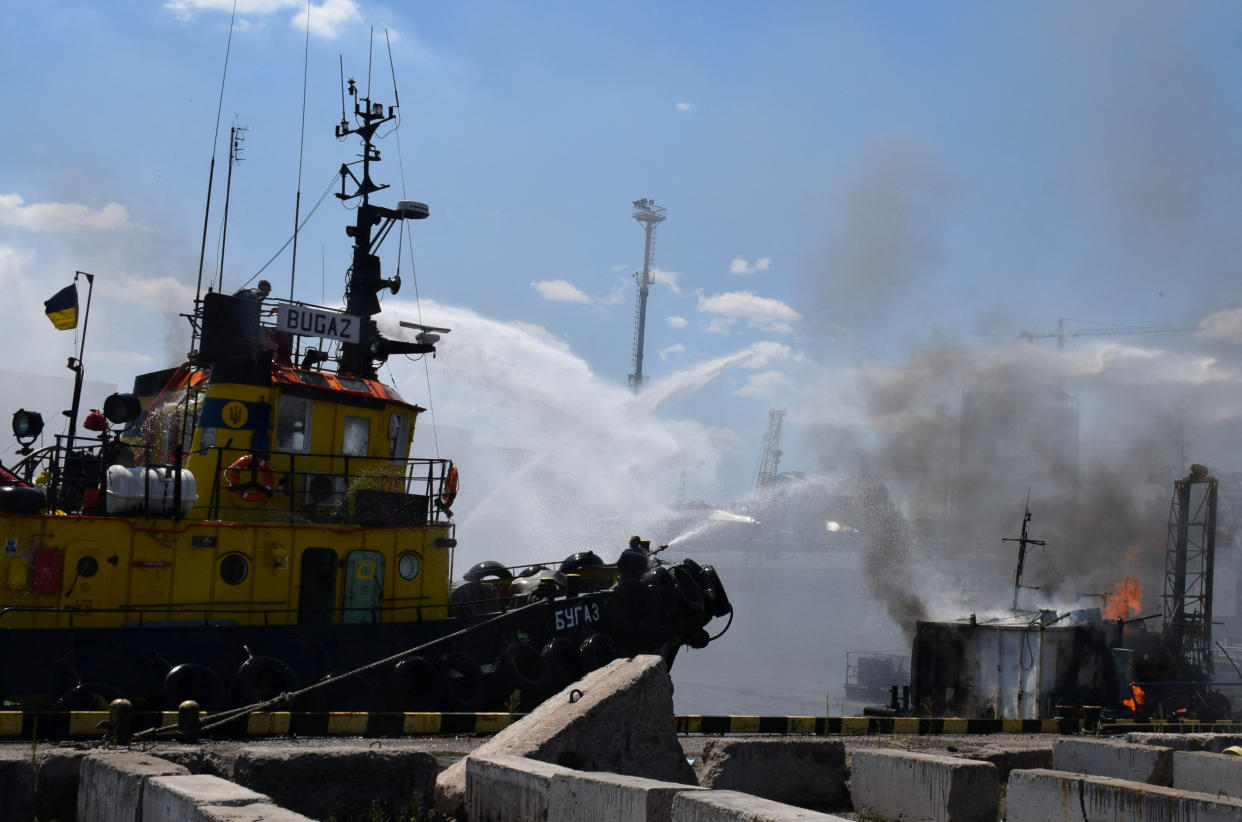 The Ukrainian military said two Kalibr missiles fired from Russian warships hit the area of a pumping station at the port and two others were shot down by air defence forces.

Russia said its forces had hit a Ukrainian warship and a weapons store in Odesa with precision missiles.

Global wheat prices rose on Monday due to uncertainty over the grain agreement. The prices had dropped sharply on Friday as traders anticipated an easing of supply shortages that threaten to drive millions of people towards famine.

The deal was hailed as a diplomatic breakthrough that would help curb soaring global food prices by restoring Ukrainian grain shipments to pre-war levels of 5 million tonnes a month within a few weeks.

Zelenskiy’s economic adviser, Oleh Ustenko, told Ukrainian television the strike “indicates that it will definitely not work like that”.

He said Ukraine could export 60 million tonnes of grain over the next nine months, but it would take up to 24 months if its ports’ operations were disrupted.

As well as the eastern Donbas region, Russia has set its sights on large swathes of southern Ukraine, where it has occupied two regions north of the Black Sea peninsula Crimea, which it annexed from Ukraine in 2014.

Ukraine’s military reported progress in a counter-offensive in Kherson, however, saying its forces had moved within firing range of Russian targets. Kyiv has said it is steadily moving back into the region.

Britain said Russian commanders continue to face a dilemma – whether to bolster their defences around Kherson and nearby areas or resource their offensive in the east.

Reuters could not immediately verify the battlefield reports. 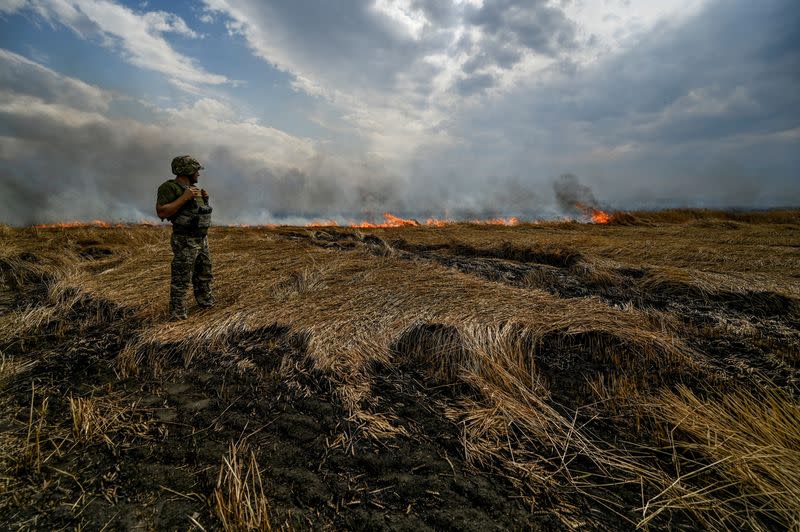 Moscow has charged 92 members of Ukrainian armed forces with crimes against humanity and proposed a new international tribunal that would handle the investigation, Alexander Bastrykin, the head of Russia’s investigative committee, said in remarks published overnight.

The announcement comes after the United States and more than 40 other nations agreed on July 14 to coordinate investigations into suspected war crimes in Ukraine, mostly concerning alleged actions by Russian forces and their proxies.

Under the grain agreement, a Joint Coordination Center staffed by officials from Ukraine, Russia, the United Nations and Turkey will monitor ships passing the Black Sea to Turkey’s Bosporus Strait and on to world markets. All sides agreed on Friday there would be no attacks on them.

Ukraine and Russia are major global wheat exporters and the blockade has trapped tens of millions of tonnes of grain, worsening global supply chain bottlenecks.

Along with Western sanctions on Russia, it has stoked food and energy price inflation, driving some 47 million people into “acute hunger,” according to the World Food Programme.

Moscow denies responsibility for the food crisis, blaming the sanctions for slowing its food and fertiliser exports and Ukraine for mining the approaches to its ports.

Ukraine has mined waters near its ports as part of its war defences but under Friday’s deal pilots will guide ships along safe channels.

Putin calls the war a “special military operation” aimed at demilitarising Ukraine and rooting out dangerous nationalists. Kyiv and the West call this a baseless pretext for an aggressive land grab.