One man has died and a girl is in hospital with life-threatening injuries after separate collisions in Melbourne’s south-east overnight.

The man, who is yet to be identified, was struck by a car travelling north on a green light on Stud Road in Dandenong just after 8.30pm on Thursday.

He appeared to be in a confused state on Herbert Street and was seen shuffling himself across a pedestrian crossing prior to the collision. 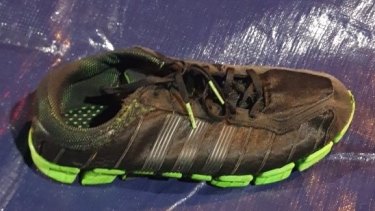 A shoe worn by the unidentified pedestrian who was struck and killed by a car in Dandenong.Credit:

Emergency services worked on the yet to be identified man, but he died at the scene. The driver of the vehicle stopped at the scene and has spoken to police.

The man, who is believed to be aged in his 30s and is described as being African in appearance, was wearing a distinctive pair of black shoes with bright green soles. Police have released an image of one of the shoes in the hope it will help someone identify him. He was also wearing a black military-style cap.

Meanwhile, detectives are appealing for witnesses after a primary school-aged girl was hit by a blue BMW station wagon on Golden Grove in Springvale South about 5pm on Thursday.

The girl is in hospital with life-threatening injuries. The male driver of the BMW is assisting police with their inquires.

Thirty lives have been lost on Victoria’s road this year, up from 40 at the same time last year.

Anyone who witnessed either incident or with dashcam footage from the scene of the collisions is urged to contact Crime Stoppers on 1800 333 000 or submit a confidential report via crimestoppersvic.com.au.