EXCLUSIVE: ‘I’ve got to protect my family.’ Wife of Congressman Van Taylor reveals she is sticking with her philandering husband ‘for the moment’ after his steamy eight-month affair with ‘ISIS bride’

The blue-blooded wife of the Republican congressman mired in a sex scandal with ‘ISIS bride’ Tania Joya is standing by her man — for now.

But Anne Coolidge-Taylor would only pledge to remain with husband Van temporarily when asked whether she would stick with him following the revelation of his eight-month affair.

Anne, 51, paused before answering a DailyMail.com reporter who asked if she was staying with him,

‘Ah, for the moment!’ she replied.

Two-term Rep. Taylor, a 49-year-old Iraq war veteran, last week admitted the affair with Joya, 38, a former jihadist who went to fight for ISIS in Syria and dreamed of becoming a suicide bomber. 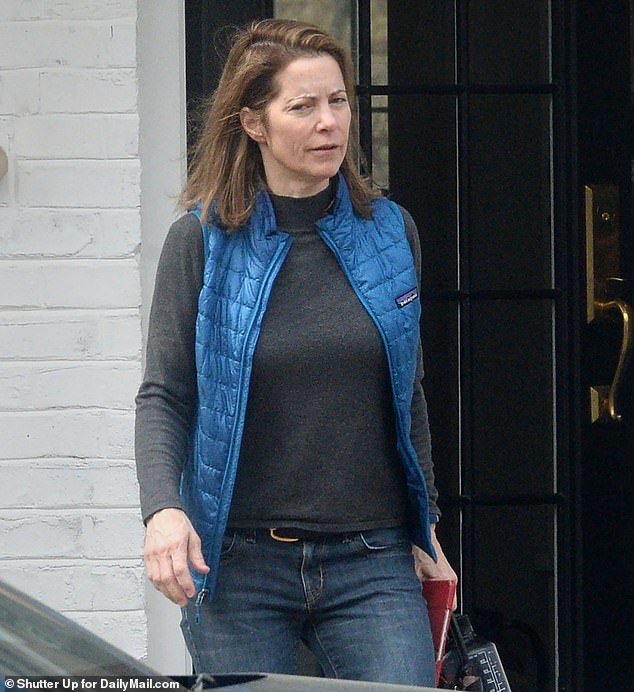 ‘For the moment!’ Anne Coolidge-Taylor would give no long-term commitment to staying with her husband, Republican congressman Van Taylor 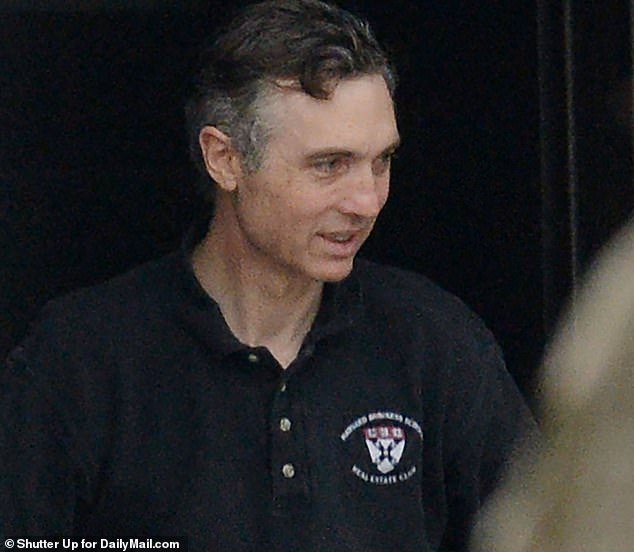 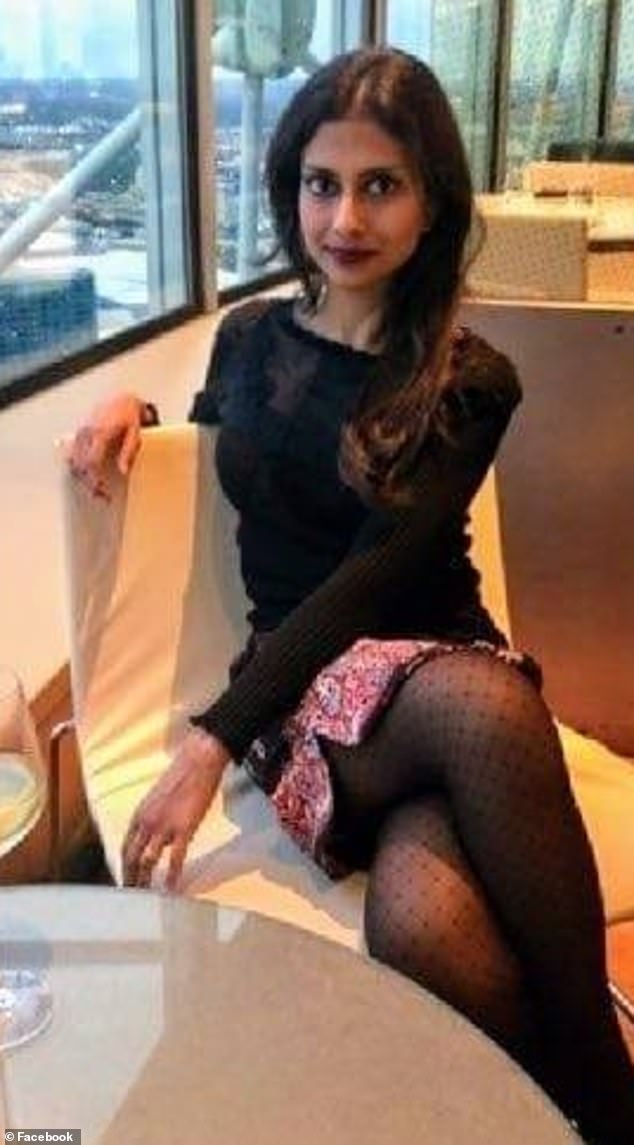 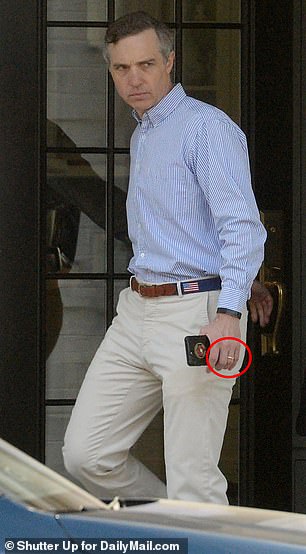 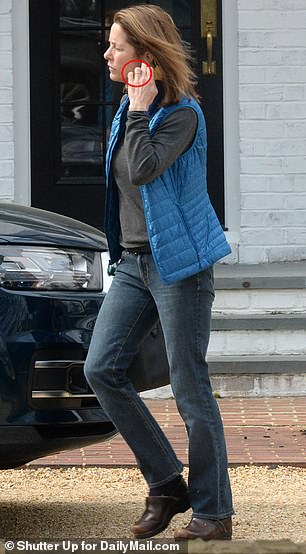 Still wearing their wedding bands. Van Taylor and wife Anne Coolidge-Taylor both kept their rings on while running errands inMcClean, Virginia, over the weekend

He and his wife of 18 years spent the weekend at their home in McClean, Virginia, just outside Washington, D.C. They ventured out separately but not together.

Both still wore their wedding bands.

Anne — a relative of former president Calvin Coolidge and a direct descendant of Thomas Jefferson — would not talk about her husband’s affair. ‘This has been very tough for my family. I’ve got to protect my family,’ she told DailyMail.com after returning from dropping their daughters off at school.

Taylor represents a district in Texas based around Collin County, north of Dallas. Though the couple have homes in Plano, they live full-time in their $3.6 million, six-bedroom mansion in Virginia.

He announced last week that he was pulling out of the GOP primary for the seat after being forced into a run-off as no candidate had received 50% of the vote in the primary. 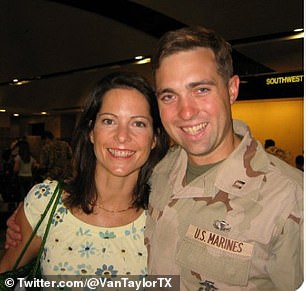 Taylor was a captain in the US Marines. He said his wife sent him a letter every day that he served in Iraq

‘Today I am announcing I will not continue my campaign to seek re-election to Congress,’ Taylor wrote in an email to supporters on Wednesday last week.

‘About a year ago, I made a horrible mistake that has caused deep hurt and pain among those I love most in this world. I had an affair, it was wrong, and it was the greatest failure of my life.’

Although considered a hard-line conservative, Taylor does not believe Donald Trump’s assertion that he won the 2020 election and so candidates from the MAGA right challenged him.

Joya says she was upset after Taylor dumped her. She contacted Suzanne Harp, one of Taylor’s challengers, with details of their affair. Harp arranged for an interview which she then sent to several right-wing news sites immediately prior to the primary.

In one interview, Joya outlined how she fell head over heels for Taylor while working on a re-education program for former extremists, a cause she took up after fleeing from Syria in 2013 and resettling in Plano. 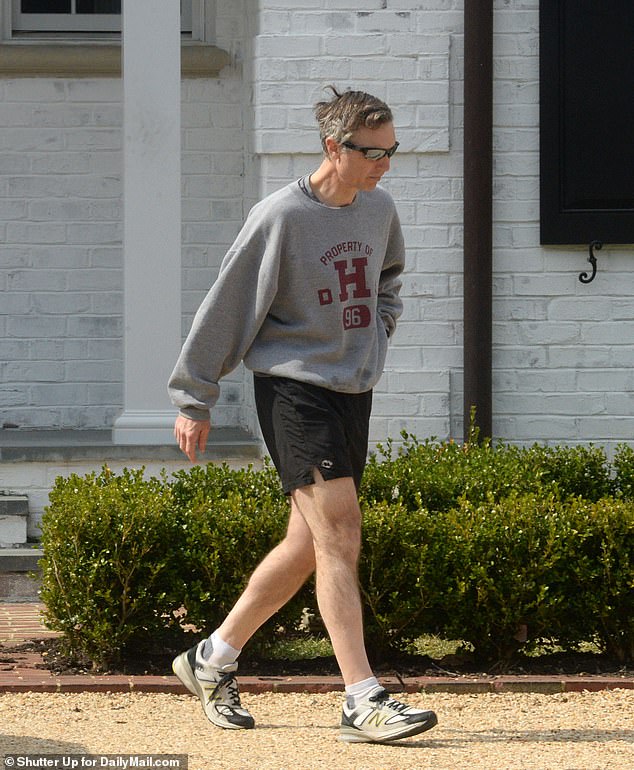 Van Taylor and his wife spent time together inside their home at the weekend, but only ventured out alone 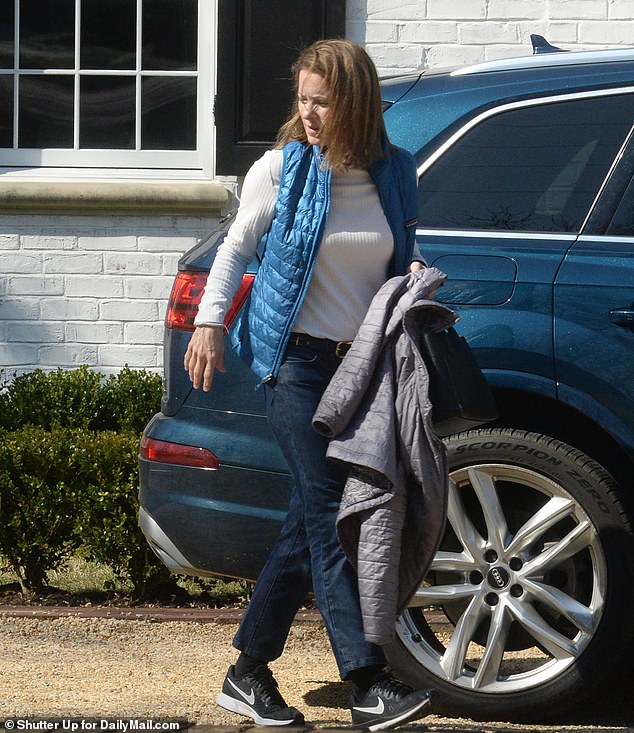 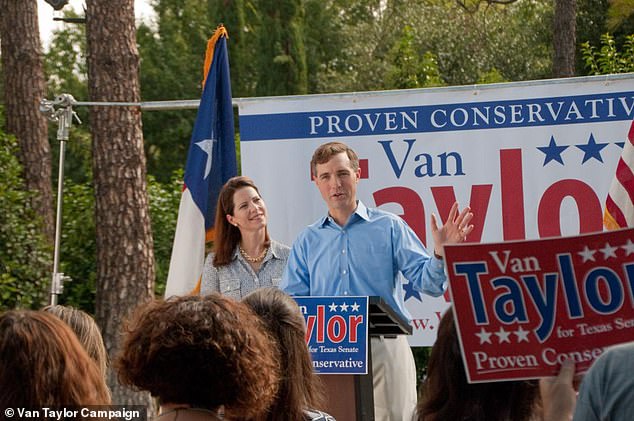 ‘About a year ago, I made a horrible mistake that has caused deep hurt and pain among those I love most in this world,’ said Taylor (pictured with wife Anne). ‘I had an affair, it was wrong, and it was the greatest failure of my life’ 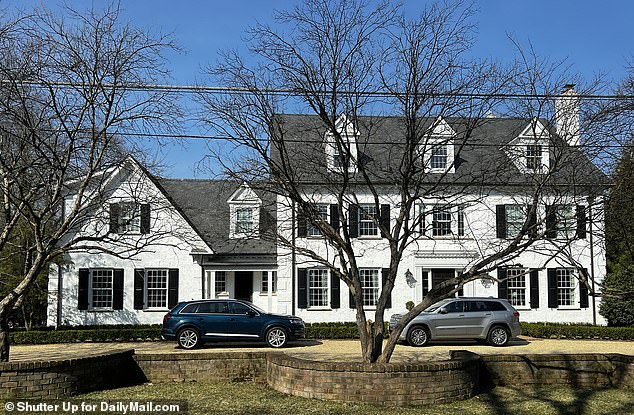 Van Taylor and his wife Anne live in this six-bedroom $3.6 million home in McClean, Virginia, just outside Washington, D.C.

At the time she was married to second husband Craig Burma and was trying to set up a meeting between the congressman and her boss at the re-education program.

She said Taylor called her one Friday night and they started to talk.

‘He was very serious, he just wanted to know more about what I was doing in my life.

‘I was interested in him and exchanging stories as I knew he’d been in Iraq. I needed a friend and I knew he was an important person and he went to Harvard and I knew him and admired him and I was happy he called me.

Joya admitted she initiated their affair. ‘I told him I found him attractive. For an entire month every day during October 2020 he wouldn’t stop messaging me, he went crazy.

‘It was so distracting, he was going crazy for me to give him attention. ‘I told him my marriage wasn’t doing well and was having difficulties with my older two children.’

Joya said they started having sex in November 2020 — the month that Taylor got elected for his second term in Congress.

‘One time he came to stay the night at my house and he said “I’m never going to leave Anne, you have to understand that.”

‘I don’t see a future for us, Joya revealed.

‘I was really hurt, I said can you leave and he didn’t want to leave. He said he wanted to stay then he had sex with me many times.’ 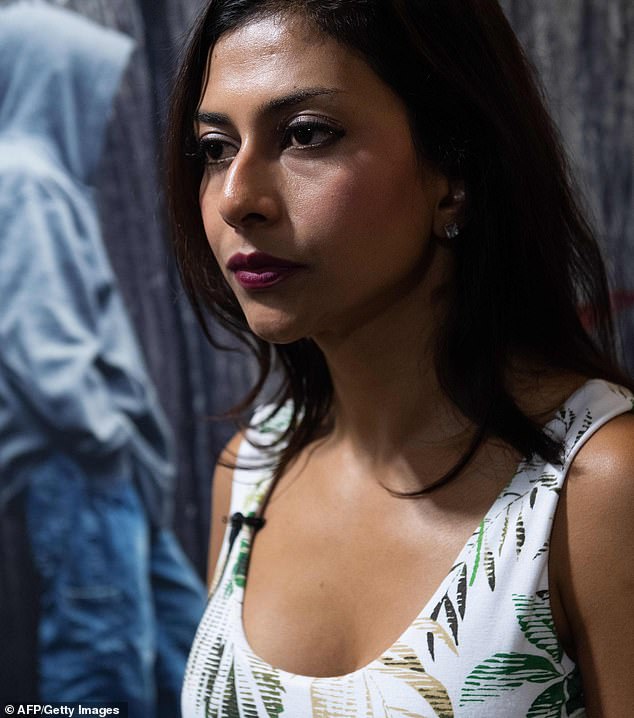 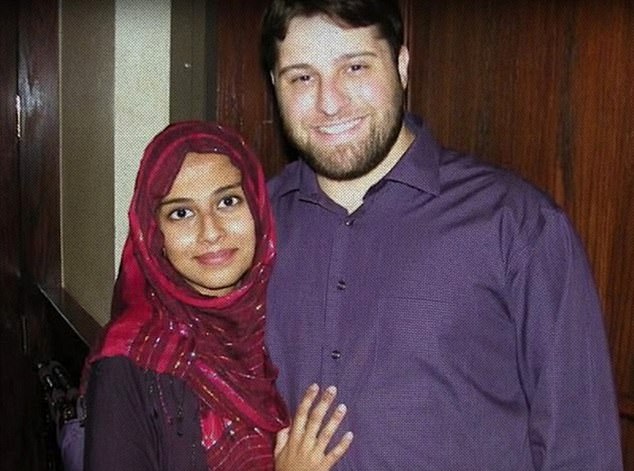 Tania Joya’s traveled to Syria with first husband, Texan John Georgelas when he went to fight for the Islamic State. She dreamed of becoming a suicide bomber before she became disillusioned 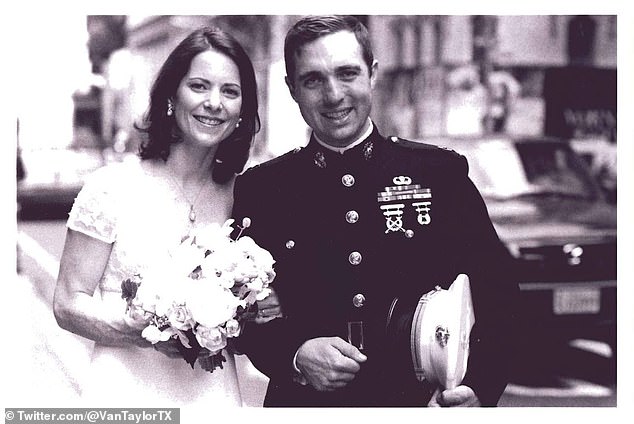 Rep. Van Taylor and his wife Anne on their wedding day. The Republican congressman publicly apologized to his wife and three daughters in a statement to supporters as he withdrew from his primary race

She said she broke up with him in January 2021 but the very next day took him back.

Joya, who was born in Britain to Bangladeshi parents, said she fell deeply in love with the rugged former Marine but felt bitterly betrayed and suicidal when he refused to leave his wife and three daughters.

She said she told him she would ‘not be your mistress forever.’

‘I deserved better and I knew that he and Anne were having problems for a decade. 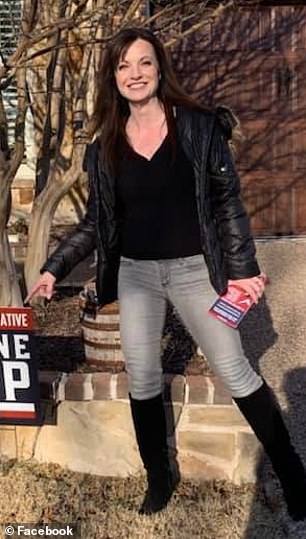 But she said the two had ‘an unhealthy obsession for each other.’

‘He’d say “You’re my heroin, you’re my cocaine, you’re my weakness.” I’d say I’m in love with you, that wasn’t enough for him.’

In one interview Joya said that Taylor had told her she was the more dominant woman in his life, telling her ‘I made him feel stronger, more manly. I gave him opinions he’d never heard of before.

‘He said he loved my company.’

The affair eventually ended in June 2021. Later that year Joya said she approached Taylor’s wife, a real estate mogul, and told her all. When that seemed to have no effect, she contacted Harp.

Joya was born Joya Choudhury, in Harrow, northwest London. Her father Nural Choudhury moved between jobs including bank clerk and accounts assistant, while her mother Jahanara ran a catering business.

One of five children, she says she was brought up to believe men were ‘on a pedestal’.

She claims she was radicalized after the family moved to Barking, east London, when she was 17. There she encountered schoolgirls who ‘slut shamed’ her for dressing in Western clothes.

Soon, she was wearing the full veil and being told by a friend to celebrate the bombing of the World Trade Centre in New York. By her own admission, she became ‘a hardcore jihadist’. Joya said: ‘We believed in jihad but the jihad we were thinking of was very rosy pictured.’ 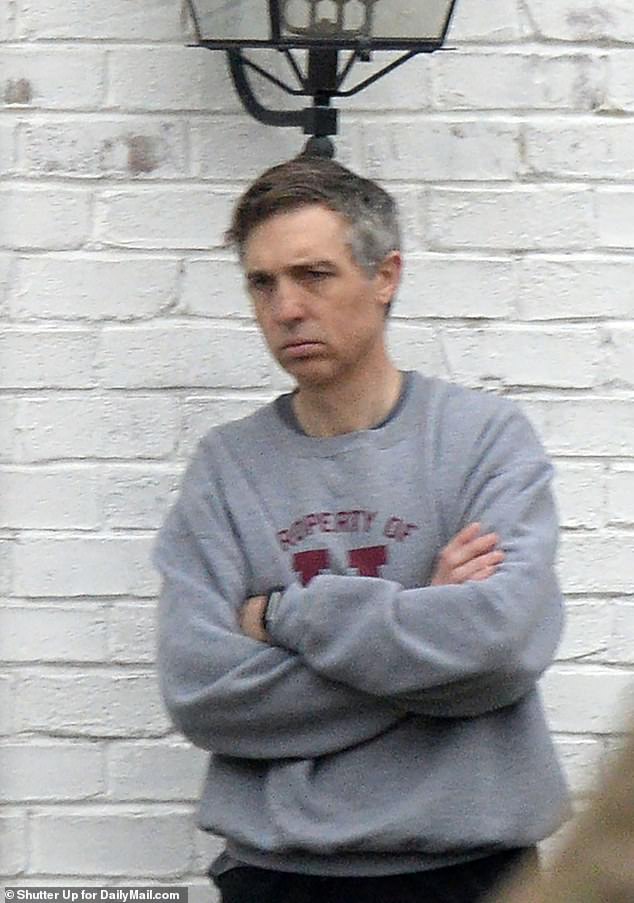 Taylor and his wife have homes inside his Congressional district in Texas, but they live full-time in Virginia where their daughters go to school 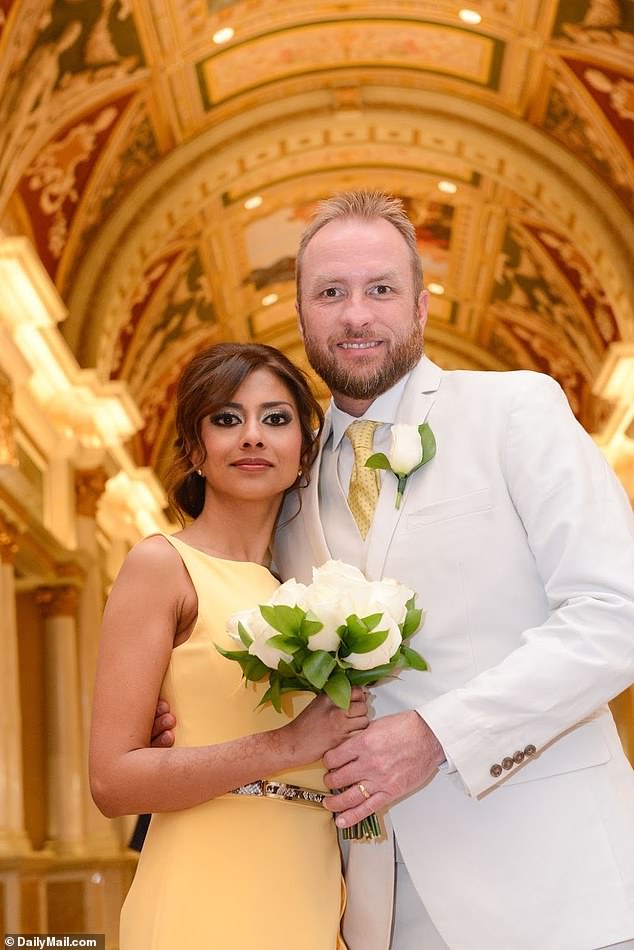 Tania Joya married second husband Craig Burma in 2018. They divorced in January. Burma says Van Taylor was ‘predatory’ in having an affair with Joya 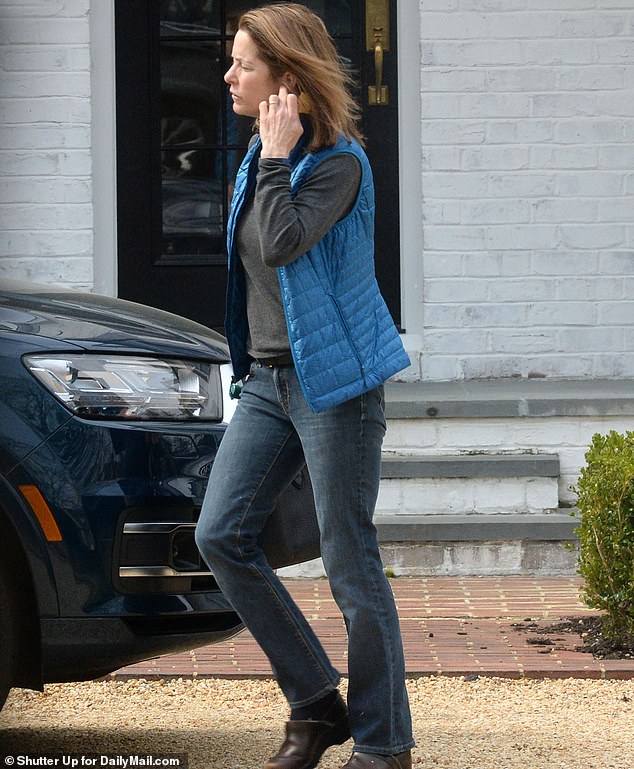 Islam had become ‘the solution to everything,’ she said.

She joined a Muslim matrimonial website and by February 2003 had met John Georgelas, the son of U.S. Air Force Colonel Timothy Georgelas and his wife Martha. They were married within a month in a sharia ceremony.

Joya had the ‘escape’ she craved, moving with her new husband first to an upmarket suburb where she was overawed by the Georgelas family’s four-bedroom, five-bathroom home with a pool.

The couple travelled to England and Syria, initially funded by money from their marriage, then settled in California where Georgelas got a job as a data technician.

He was caught illegally accessing passwords for the American Israel Public Affairs Committee, however, and was sentenced to 34 months in jail. He served his sentence, and Joya stuck by him, and again during three years’ further probation in Texas.

By 2011, she had given birth to the couple’s third son and they were free to leave. They moved to Cairo where, according to Mr Wood, Georgelas met other jihadists and was a vocal supporter of ‘pre-IS pro-caliphate voices’.

By 2013, Georgelas was determined to go to Syria and in August took his wife, who was five months pregnant, and three sons over the border to the city of Azaz. She became known in the British press as ‘The First Lady of ISIS.’

She claimed Georgelas controlled her, but he let her leave Syria, heavily pregnant with their fourth child after a few months. She claims she pushed her youngest child over the border in a stroller.

She made her way to the United States where she married Burma in June 2018. They were divorced in January.

Last week, Burma told DailyMail.com that he blamed Tylor for breaking up their marriage.

‘He says he made one horrible mistake. No, he made a mistake every single time he slept with her,’ said Burma, 52..

‘He made a mistake every single time he texted filthy stuff to her. He made thousands of mistakes and he should atone for all of them.

‘He knew we were having problems in our marriage at that time. To me, that seems like predatory behavior. She was vulnerable and he targeted her for sex,’ he added.