Before the pandemic, Lauren Rigby never got itchy or had a rash. The Sydney veterinary nurse had “perfect milky white smooth skin” until she started using sanitiser to frequently wash her hands, and limit the spread of COVID-19.

Increased use of hand sanitiser and other disinfectants have caused a spike across the world in serious skin problems among health workers and the public, finds international academic research.

What started as a rash on Ms Rigby’s hands spread. Sitting on a park bench or touching clothes or merchandise sprayed with disinfectant to kill COVID-19 made her body burn.

“It started on my hands, progressed up my arms, my torso and my legs. One day, [eczema] spread all over my face, and I had a panic attack. I didn’t know what was going on,” the 22-year-old said. 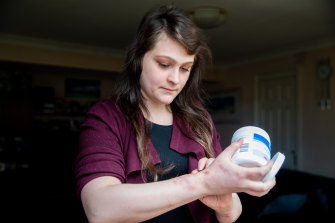 Lauren Rigby feels lucky to be alive after battling a traumatic skin condition triggered by exposure to chemicals and hand sanitiser during the pandemic.Credit:Edwina Pickles

Her skin fell off. “I could literally sweep up plates of my skin. It was horrible,” she said.

Then she lost her hair. She was repeatedly hospitalised, and nearly died this year from a condition called erythroderma, triggered by her atopic dermatitis (eczema) that covered 95 per cent of her body.

Ms Rigby shared her story as part of a campaign called #THISISECZEMA to highlight the prevalence of the eczema, which affects 20 per cent of children and 10 per cent of adults.

Melanie Funk, founder of Eczema Support Australia, said there was often the perception eczema was a rash or itch when those with severe eczema may have compromised health for about 50 per cent of the time.

Lauren Rigby was admitted to Westmead Hospital earlier this year with erythroderma, a potentially life-threatening inflammation of the skin.

Atopic dermatitis is an inflammatory skin condition. Often the cause is unknown. Some people like Ms Rigby, with very severe eczema, carry a gene that makes them more vulnerable to it.

Increases in contact dermatitis (caused when the skin comes in contact with something) were the most common skin problems to get worse during the pandemic, said a fellow of the Australasian College of Dermatologists, Dr Deshan Sebaratnam.

“With constant handwashing, we are stripping away some of the natural barrier functions of the skin which means things that wouldn’t normally be noxious to the skin (even things as seemingly innocuous as water) start to damage the skin,” he said.

Dr Sebaratnam, a dermatologist at Liverpool Hospital and senior lecturer at the University of NSW, said this had been a real issue for healthcare workers, and parents facing more mess – and more handwashing – as they cared for children at home.

The Lancet estimated about 23 per cent of health workers suffered from serious dermatitis. Other publications reported increased dermatological problems among the public triggered by increased handwashing.

Exacerbating the problem was the use of stronger disinfectants, said Dr Sebaratnam.

Since the listing of a product called benzalkonium chloride by the Therapeutic Goods Administration to disinfect against COVID-19, members of the public had been using it to wash their clothes. “It’s causing florid dermatitis all over the body,” he said.

Ms Funk said some people had severe anaphylactic reactions to this disinfectant. It is not recommended for use near the skin, particularly for people with atopic eczema.

Ms Rigby of Alfords Point in Sydney’s south said the most traumatic stage in her life was when she was admitted to Westmead Hospital earlier this year. “I was told I was at high risk of heart failure. I couldn’t regulate my temperature, my metabolism was too fast, and I was losing so much blood and fluid through my skin that I was insatiably dehydrated.”

She said not many people realised how skin problems could become so severe. “That is why I am so passionate about raising awareness,” she said.

Now on shots of Dupixent, used for allergic diseases such as eczema, she is starting to feel better.