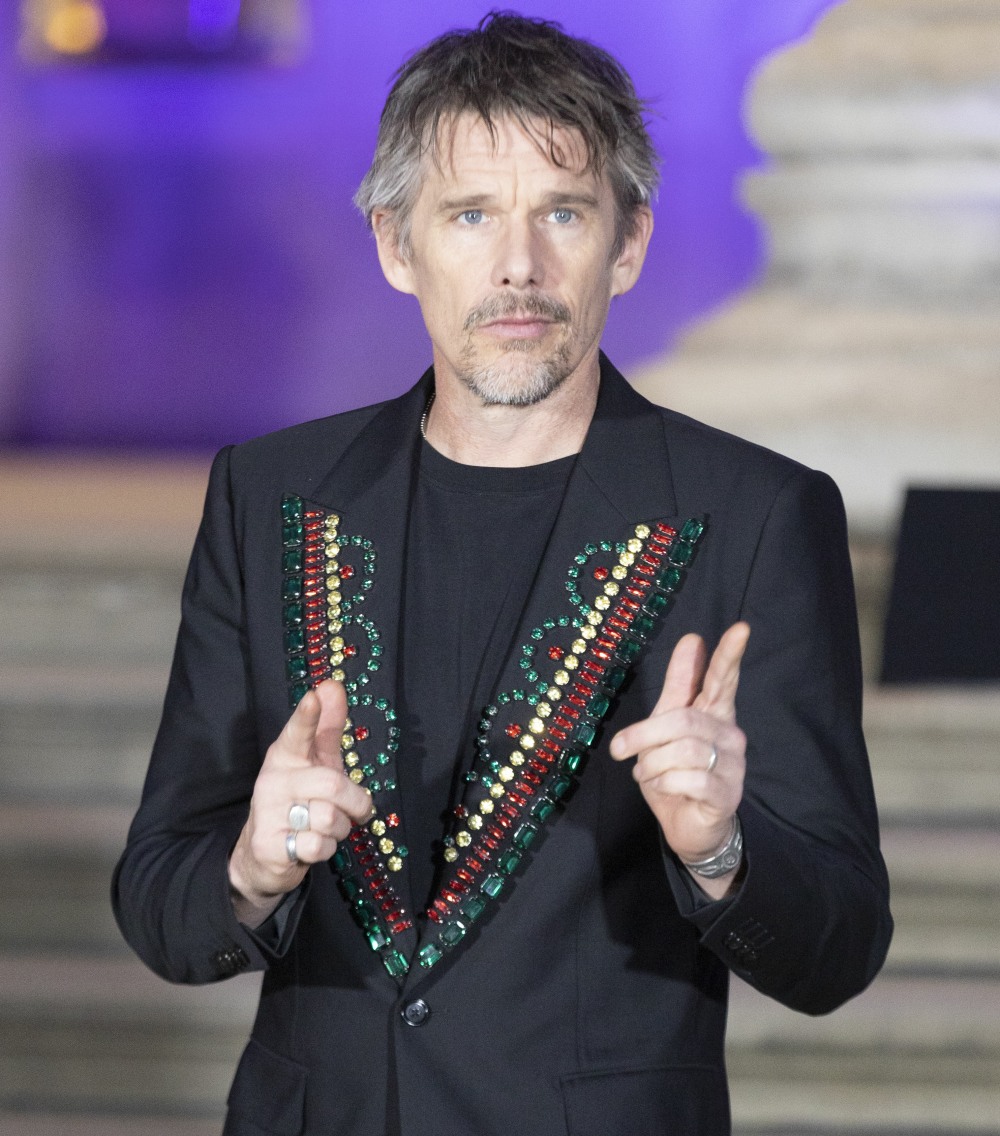 Ethan Hawke is currently promoting an HBO Max docuseries which he directed. It’s called the Last Movie Stars, and it’s about the lives and careers of Paul Newman and Joanne Woodward. Mostly about Paul Newman. It sounds like a fascinating project, and Hawke based everything on the transcripts from a series of deeply personal interviews Newman did when he was considering working on a memoir. Hawke has so much love for Paul Newman in general, but especially Newman’s craft, his skill, his decision-making as an actor and a man. Hawke spoke to IndieWire recently about the docu-series and this too is Classic Ethan Hawke. He will talk anyone’s ear off. He is one of the best name-droppers in the industry. He has an encyclopedic memory for sh-t famous people said to him. He also knows that at 51, he’s in the “last act” of his career, where he will pretty much only play, as he calls them, “old-man” roles. He seems fine with it. You can read the full piece here. Some highlights:

What helped him get through a messy, public divorce: “The answer is always work. If you’re worried everybody has superficial interests, then you have to give them something substantive to talk about. In the years after my divorce, I doubled down on the life of an actor. I did “Hurly Burly,” I did “The Coast of Utopia,” I did “The Bridge Project” and took Chekhov and Shakespeare around the world for a year. I just decided that no amount of bad press will turn me into a bad actor if I don’t let it.

The phases where he couldn’t get work: “I always look back at the periods that I perceived as the hardest as being the ones with the most growth. It seems funny, but there was a period right before “Training Day” where I couldn’t get a f–king job because I was the Gen-X poster boy and everyone thought they knew me. I was supposed to be washed out to sea with that fad. I remember I wanted to get an audition for “Saving Private Ryan” and I couldn’t f–king get it. Everyone knew who I was and they didn’t want me. I’m sure if you talk to Matt Dillon or DiCaprio — anybody who’s had young success — they’ll acknowledge that you hit these walls where people think they’ve figured you out and then they’re done with you. You have to be willing to be humble enough to keep getting up to the plate.

Never winning an Oscar with four nominations: “John Coltrane never won a prize. There are benchmarks that society likes, but they can’t be benchmarks for the artist because then you’re just lost. Sometimes I wonder if Tom Cruise won the Oscar for “Magnolia,” would it have changed the trajectory of his career? It kind of seems like he gave up on chasing approval from the industry and just did his own thing. That’s probably a good thing for him, but sometimes I wish they gave him more prizes for “Magnolia” so that he had done it again. Then again, I find these things so mysterious. If Gwyneth hadn’t won the Oscar for “Shakespeare in Love,” would we have gotten 50 more better performances? Sometimes the yearning gets satiated and sometimes it doesn’t.

On Marty Scorsese & Francis Ford Coppola criticizing Marvel: “If people like Scorsese and Coppola don’t come out to tell their truth about how there are more important things than making money, who’s going to? It’s easy for them, but it needs to be somebody in the community saying, “Hey, everybody, this is not ‘Fanny and Alexander.’” If you keep reviewing these movies that are basically made for 14-year-olds like they’re “Fanny and Alexander” or “Winter Light,” then who the hell’s going to get to make “Winter Light”? I appreciate the elder statesmen of the community reminding people not to set the bar too low. I know it makes some people think they’re stuck up, but they’re not stuck up.

Why he thinks Peter Weir hasn’t made a movie since 2010: “I think he lost interest in movies. He really enjoyed that work when he didn’t have actors giving him a hard time. Russell Crowe and Johnny Depp broke him. He’s someone so rare these days, a popular artist. He makes mainstream movies that are artistic. To have the budget to do “The Truman Show” or “Master and Commander,” you need a Jim Carrey or Russell Crowe. I think Harrison Ford and Gerard Depardieu were his sort of actors. They were director-friendly and didn’t see themselves as important.

His last act: “I’ve definitely made the turn from being an old young person to being a young old person. I prefer this. I feel like playing John Brown in “The Good Lord Bird” was that for me: the beginning of my “old man” career, the beginning of my last act. But it’s the beginning of it, you know? I definitely find myself looking over a filmography and thinking about which ones I could’ve cut out because I only have so much time left. I know I only have so many movies left. You have an awareness of time. When I was younger, I was like, “I’ll do this, I’ll do that, that’ll be a good learning experience, and then I’ll try this,” thinking I had all the time in the world. Now, I’m like, “I didn’t learn anything from that one or that one, and that one would’ve been better spent in three months with my family.”

That Peter Weir comment is fascinating, and it feels like Hawke knows a lot more than what he’s saying. Hawke also talks about how Marvel is very actor-friendly, as in the studio respects actors and wants to appeal to good actors, but Marvel isn’t necessarily director-friendly. He expounds on those themes that some directors are actor-friendly, some aren’t, and some actors are giant pains in the ass. I also agree with him about Coppola and Scorsese, which I covered at the time, and Hawke is right, those are important conversations to have within Hollywood about art and where the bar is set and whether too many movies are theme parks. The Tom Cruise/Magnolia thing is fascinating too because, well, I still halfway believe that Cruise should have won the Oscar for Magnolia. And it would have changed his career. The comment about Gwyneth was shady AF!!! 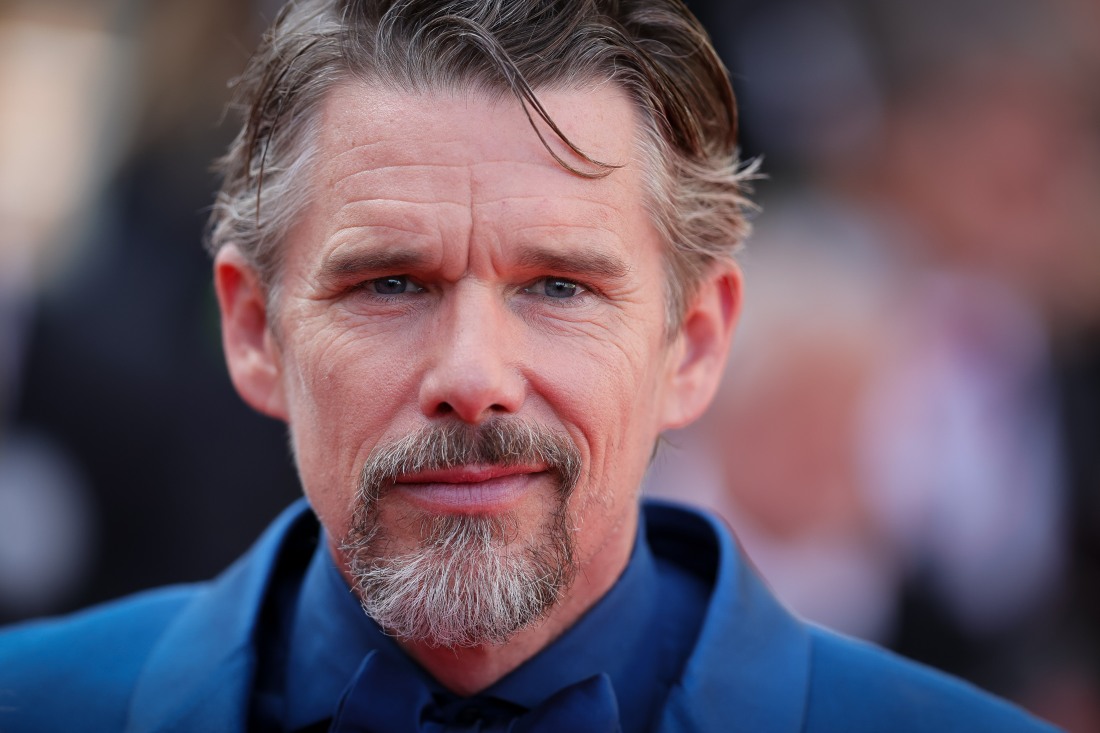