According to his agent Bill Behrens, the former TNA Impact Wrestling star, who had been struggling with drug addiction for many years, passed away at the age of 39.

AceShowbiz –Jimmy Rave has passed away. The former professional wrestler died at the age of 39 six months after having both of his legs amputated due to MRSA infection, according to his agent Bill Behrens.

Bill announced the heartbreaking news via Twitter on Monday, December 13, adding that Jimmy’s daughter, Kailah, had helped him write it. “James Michael Guffey has died at the age of 39,” they confirmed.

“Jimmy had been struggling with drug addiction for many years. His struggles resulted in the amputation of his arm, and, later, both of his legs,” Bill wrote in the statement. “James was one of my kids and his loss hurts me and many others, and we wish we could have saved him, but we could not.”

Elsewhere in the statement, Bill remembered the late athlete as saying, “James was best known as Professional Wrestler, Jimmy Rave. His career, which started in 1999, continued for over 2 decades.” Bill added, “He was a two-time NWA World Junior Heavyweight Champion. He appeared in Total Non-Stop Action Wrestling, where he teamed with Lance (Hoyt) Rock as the ‘Rock and Rave Infection’.”

Bill’s statement went on to describe Jimmy’s long-running career in the wrestling world, adding he “toured Japan with both Dragon Gate Wrestling and New Japan Pro Wrestling where in 2008 he competed in the ‘Best of the Super Junior’ Tournament.” Bill also said that Jimmy appeared in “numerous independent promotions including Rampage Pro Wrestling, Atlanta Wrestling Entertainment, and Combat Zone Wrestling, among many others.”

“Outside of wrestling, he held the position of Director of the Bartow County, Georgia Peer Support, Wellness, and Respite Center for several years,” Bill continued. He then concluded the announcement, “James is survived by his ex-wife Felicia, daughter Kailah, son James II, and his parents Jim & Toni Guffey. At the time of his death, he was living in Philadelphia, PA area with Gabby Gilbert,” noting that Jimmy’s memorial services will be held in Georgia. 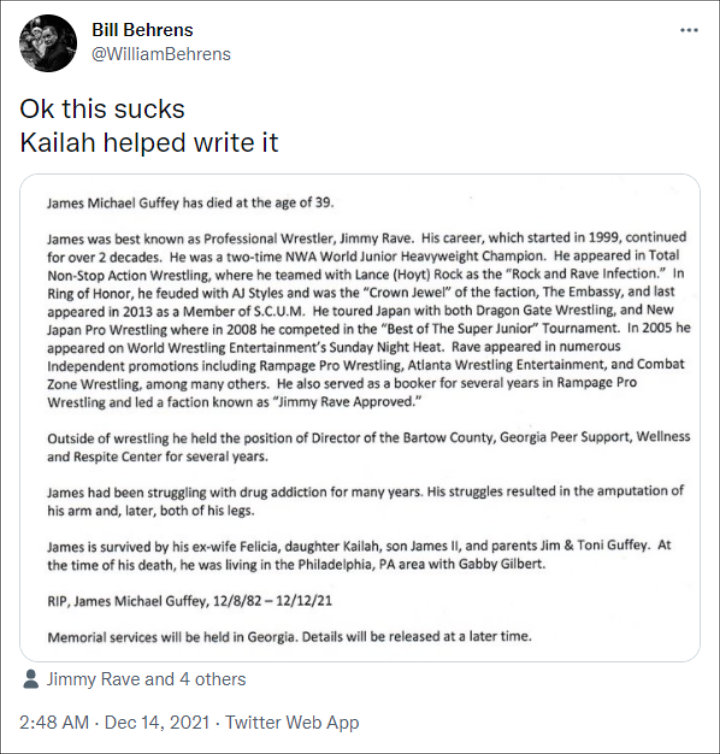 Upon learning the sad news, Mick Foley took to his Twitter account to mourn Jimmy’s death. “This really hurts. Jimmy Rave has passed away. He was only 39,” the retired pro wrestler wrote alongside a photo of Jimmy.

TNA Impact Wrestling also mourned Jimmy’s sudden passing. “#RIPJimmyRave. We are deeply saddened to learn of the passing of James Guffey, otherwise known as Jimmy Rave. We offer our sincere condolences to his family & friends during this difficult time,” the statement posted via Twitter read. “Rave made his IMPACT debut in 2002 during The Asylum Years & became a mainstay of the X-Division.”

Jimmy, who had his arm amputated in November 2020, shared the news about his double leg amputation via Twitter back in October. At the time, he posted a black-and-white photo of himself post-operation.

He captioned the snap, “Apparently it’s time for me to come clean. This past June I began having trouble walking & went to my surgeon.” He ended his post, “He determined I had MRSA in both legs & they needed to be amputated immediately.”