Kate Middleton is a whizz behind the camera. Hop on the Duke and Duchess of Cambridge’s Instagram page and find heaps of family photos of the royal couple and their young family. The doting mother-of-three regularly shares snaps of their daily life, and the public gobbles up info about the cards they make for Princess Diana and cake-decorating skills. Kate has transformed the once loftier-than-thou image of the British royals to the more relatable everyday family that fans have grown to love.

According to the Daily Mail, the chief curator at Historic Royal Palaces once revealed how the royal family “see photography as their very own superpower.”  If The Firm can control the image that they’re projecting, they’re controlling the conversations around them. The Times reported that historian Lucy Worsley felt, “They were quick to realise that photography presented not a problem but an opportunity.”

However, the press made life very difficult for Diana when she was alive, as she was plagued by the paparazzi. Prince Harry shared some of his own disturbing memories with his mother, per the Mirror. “Strapped in the car, seat belt across with my brother in the car as well and mother driving and being chased by three, four, five mopeds with paparazzi on,” he said before adding, “She was always unable to drive because of the tears. There was no protection.” And while Harry and Meghan Markle share very few pics of their children with the world, Kate and Prince William employ the opposite tactic.

Kate Middleton has saturated the market 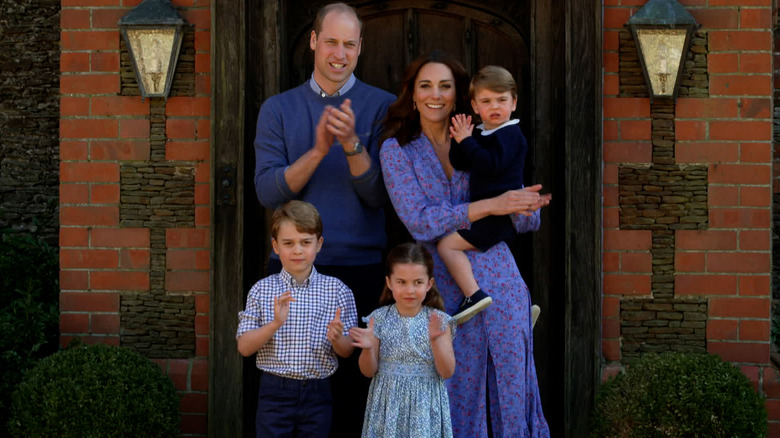 The camera delights in Prince William and Kate Middleton’s three kids. The Duchess of Cambridge has once again released a new portrait photograph of Prince George who turned eight on July 22. The future king beamed at the camera while sitting on the hood of a car parked in front of a field of wildflowers. The public has come to expect the yearly birthday photos and candid snaps of the family. And according to the Daily Mail, it’s no accident that there are so many images of the Cambridge three.

Apparently, Kate has “taken ownership of Prince George, Princess Charlotte and Prince Louis’ public image.” The Telegraph (via Daily Mail) reports that the model allows Wills and Kate to “strike the balance” because “there’s no market anymore because the Duchess comes out with her own family photos and they’re far more valuable to the press than images taken at a long lens.” They control the market by realizing that “they’re going to give in order to receive a degree of privacy back.”

Kate and William also don’t want to keep the public from George. “Equally the Cambridges do want the public to see their children and have some degree of access to them,” royal expert Camilla Tominey said. She added, “You’ve got [to] balance the private and the public of their lives and there’s an expectation of seeing George grow up because he will one day be King.” Royally smart parents there.